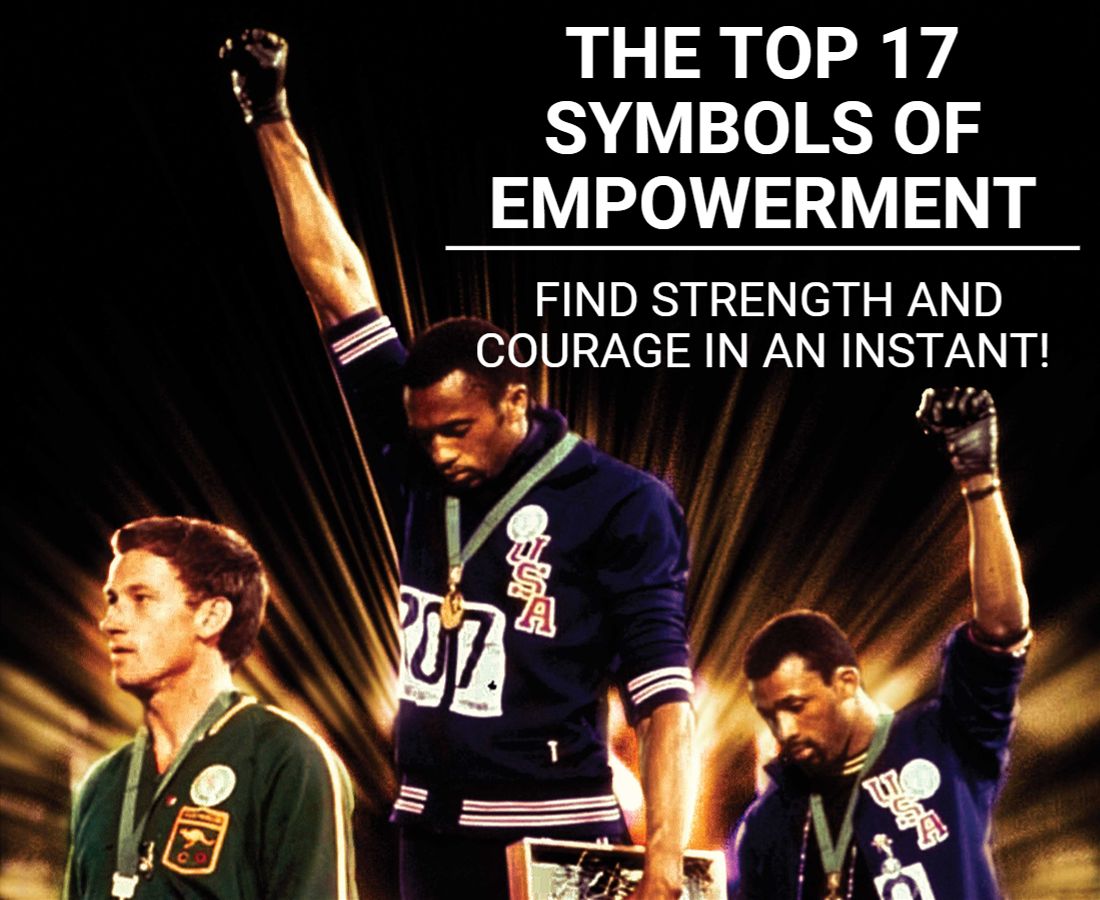 While going through constant obstacles and setbacks gives us the worst emotions in the world, the right approach can leave people feeling valued and appreciated. Empowerment helps us become emotionally more assertive and more confident, enabling us to defeat intimidation and decrease productivity and disengagement.

Since functioning in a demoralized state can be highly frustrating, let us discuss the top symbols of empowerment to equip you with adequate support that will help you play your role effectively.

Notorious for her violent temperament, the Canaanite warrior goddess Anath is admired for her youthful beauty and vigor yet feared for her unyielding ferocity in battle. Her critical role in Baal’s death and resurrection and how she helped retrieve him from the underworld makes Anath the top West Semitic symbol of empowerment.

Often characterized as a protector of heroes and the patron of courageous endeavors, she is perhaps one of the most powerful images of women’s empowerment at a time when the male deity was at its most dominant.

Widely acknowledged as a part of Jewish culture, Kabbalah refers to the ancient teachings that go by the belief that an oral tradition of equal divinity accompanied God’s word. Along with a doctrine that focuses on an individual’s direct communion with God, it gives us the spiritual strength to practice the religion in which we find more comfort.

The belief empowers us to release ourselves from bondage and live our lives with freedom, courage, pride, and wisdom.

The Ailm symbol is known to have significantly influenced the lives of the ancient Celts. It provides a much greater depth of meaning than simply being an image of remarkable strength.

Highly associated with evergreen trees, which can grow and survive even the harshest conditions, it gives us the courage to keep moving forward regardless of how challenging the situation is. Also, the Celtic Ailm provides us with high energy, positive feelings, and high-quality performance.

Named after the Sanskrit word for solar plexus, the navel , also known as the manipura, is known to awaken powerful qualities such as determination, confidence, and strength.

It is perceived that keeping this chakra healthy and well-balanced provides us with a resilient attitude, which is necessary for helping us achieve our goals. The Manipura inspires us to go after the things we want the most.

Named the angel of miracles, magic, and divine secrets, the Archangel Raziel is a powerful guide in developing our divine gifts and talents. He helps deepen our spiritual understanding, which often results in an all-encompassing knowledge that our ideas and abilities are unlimited and encompassing.

This watchful archangel guides us as we strive to overcome obstacles, often leading to remarkable rewards.

A practice that aims to enhance our ability to be calm, meditation teaches us about the value of spiritual awareness and how to take charge of our minds effectively. It has the amazing power to grant us peace and wisdom. This exercise is a form of spiritual empowerment that allows us to maintain focus and learn how the body, spirit, and mind work.

Not only do mindfulness and meditation improve our emotional and physical health, but they also enable us to eliminate our feelings of negativity and diminish stress.

Acknowledged by many as the bane of most motorists, traffic lights are placed at intersections and crossings to promote safety and control traffic flow.

While you may see the different light colors as a way to tell drivers what to do, the green light pushes us to drive freely and unhindered toward that open space. It enables us to live to our potential and be proud of our work.

Barack Obama’s “Yes We Can!”

Remembered as a time when an election defeat was transformed into a moment that inspired a generation of voters, Barrack Obama’s “Yes We Can” speech tackled inequality, white privilege, and racial tensions. Obama communicated his vision of hope and unity in this empowering speech, allowing him to win the presidency despite losing the primary.

With a message that gives everyone the opportunity to share the load, the “Yes We Can” speech is believed to pave the way for future leaders as it fosters an environment where everyone can learn from their failures and understand their success.

The raised fist symbol is represented as a raised right hand tightly clenched into a fist. It has been used throughout history to express solidarity with the oppressed and a handful of other social causes. It also conveys ideas of resistance, political protest, disobedience, and empowerment. Raising your fist in unity shows your ability to complete the most challenging tasks and demonstrates your strength and determination.

Also, the raised fist teaches us the importance of being mindful. It reminds us that to create a better and conflict-free environment, we must always start with ourselves.

At a time when most men were drafted into service during the 2nd World War, the US economic need for working women gave birth to the empowering image of Rosie the Riveter. Fast forward to our time, it is now widely seen as an expression of affirmation and acceptance, as well as an enduring symbol of encouragement.

Characterized by a rolled-up sleeve and her perfectly done hair and make-up, it combines femininity with muscularity, which adequately defines an empowered woman.

The black power fist is a symbol of resistance and solidarity that has been used by black activists and movements for decades and firstly in the 1960s.

One of the most famous ones was during the medal ceremony in the Olympic Stadium in Mexico City on October 16, 1968, when two African-American athletes, Tommie Smith and John Carlos, each raised a black-gloved fist during the playing of the US national anthem.

The tree of life

The tree of life is a symbol that represents growth, empowerment, and connection to the natural world. It is a powerful and enduring symbol that has been used by various cultures and traditions throughout history. It has been represented in Christianity, Ancient Egypt, as well as Buddhist, African, Turkish and Celtic cultures.

The tree of life is a potent symbol of empowerment that serves to remind us of our interconnectedness with nature as well as our own capacity for personal progress. It serves as a reminder to take care of ourselves, to take care of others, and to draw support and stability from the environment. The symbol depicts a large tree with deep roots, representing the idea that we are all connected and interdepended to one another and to nature and the earth. Good karma begins with giving back. Ukraine holds a special place in our hearts as the hometown of our founder.

Karma and Luck designed this handcrafted, limited edition "Peace & Unity - Feng Shui Tree of Life" with gemstone leaves composed of Citrine and Lapis Lazuli to both mimic the colors of the Ukrainian flag and impart their meaning to the world.

The hammer and sickle

The symbol was adopted by the Soviet Union and other communistic countries (East Germany had the symbol on its flag) and has become associated with communism and left-wing politics. It is often seen as a symbol of resistance and revolution, representing the struggle of the working class against capitalism and oppression.

The triskele or triskelion

The triskele, also known as a triskelion, is an ancient Celtic symbol of empowerment that represents the cycles of life and the interconnectedness of all things. A triskelion or triskeles is consisting of a triple spiral exhibiting rotational symmetry, each representing a different aspect of the cycle of life: birth, growth, and death.

The triskele is often seen as a symbol of continuity and balance, as well as a representation of the interconnectedness of all living things. It is also believed to have spiritual and magical properties and has been used as a symbol of protection and good fortune.

The triskele is a powerful and enduring symbol of empowerment that reminds us of the importance of understanding and embracing the natural cycles of life.

The Venus symbol, also known as the female symbol, is a symbol that represents femininity. It is a circle with a small cross drawn beneath it and is often used to represent the female sex or gender. Its origin comes from the mirror of Venus, the goddess of love and beauty (Mars/Ares came to represent the masculine principle)

In modern times, the Venus symbol has been reclaimed by feminists and is often used as a symbol of empowerment and pride in being a woman (sometimes also motherhood). It is a powerful and important symbol that celebrates and honors the strength and resilience of women. Gender inequality nowadays still causes poverty worldwide.

The Unalome is an empowerment symbol that represents the path to enlightenment in Buddhism. A curved line with dots and dashes on either side makes up the symbol, representing the long and winding road that one has to go on the journey to enlightenment.

The symbol represents the journey of the soul to the next stage of the spiritual journey and is seen as a reminder to stay focused and present on the path to enlightenment. It is a symbol of empowerment that inspires us to embrace our own journey toward enlightenment.

Taweret is renowned as a symbol of fertility, female empowerment, motherhood and strength. Worshipped by ancient Egyptians, this goddess was seen as the protector of expecting mothers – preparing their bodies for childbirth and blessing them with safe deliveries.