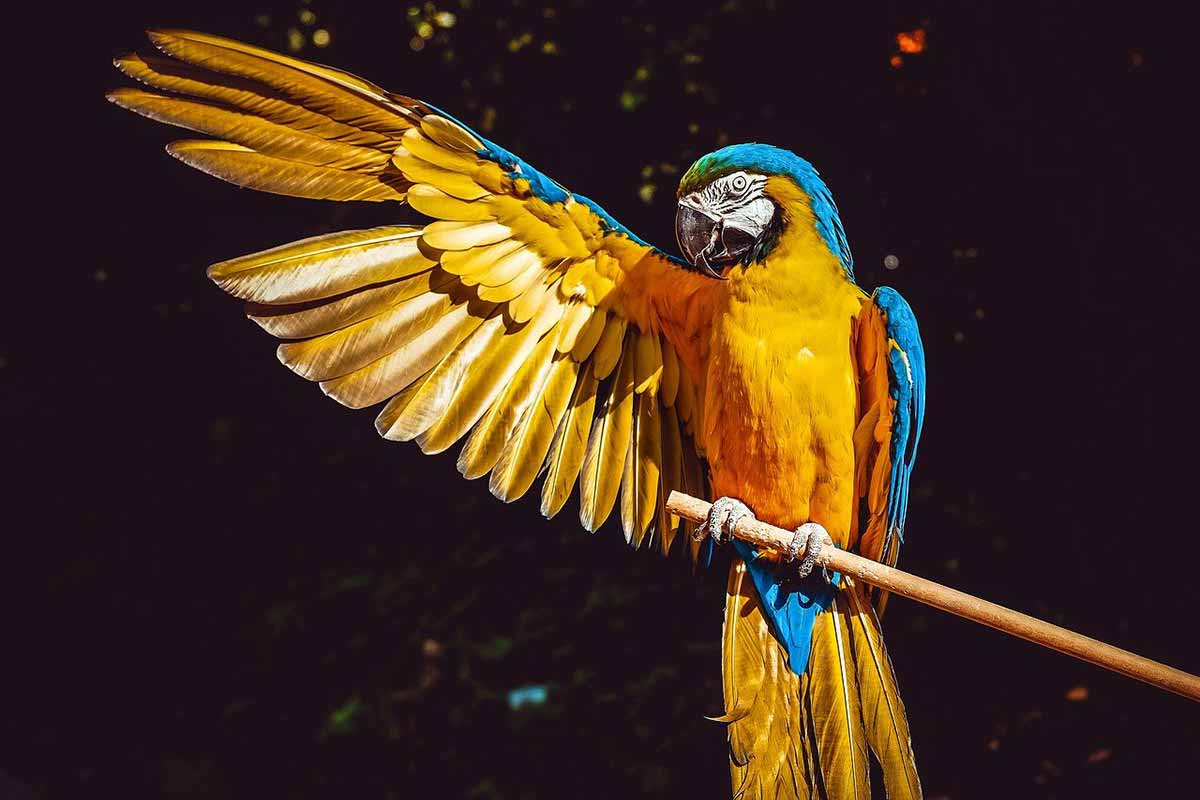 Fowl-Mouthed: Why Parrots Talk And What’s Behind Its Every Squawk

A parrot is a bird that has long been associated with happiness, life and good fortune. In many cultures it’s believed that a parrot can bring luck to the owner or act as an omen for future events. Whether they’re considered lucky or not, the symbolism of this beautiful creature in various cultures is deep-rooted and rich with meaning.

Because of their beauty and unique intelligence, parrots are hands down one of the most favored bird species in the world. Their ability to imitate the human voice as well as the added charm brought about by their multi and brightly colored plumage make them a popular pet particularly among kids.

Such magnificent allure has made these birds of adorable curved beaks and remarkably strong legs an excellent inspiration for artists, not just for their grace but for their many representations as well. Known to bear the gifts of pride, attraction, and self-confidence, we’ll screech and claw our way towards understanding the great parrot symbolism.

Teach a parrot the terms ‘supply and demand’ and you’ve got an economist.

As the only birds that can use their toes and sharp claws to pick food and bring it to their mouths, there is no question that parrots are simply brilliant and one-of-a-kind. Their typical lively and talkative behavior makes them exceptionally fun as pets, not just because popular media often show them sitting comfortably atop the shoulders of pirates but because parrots represent love, being grateful, and friendship. Being in the presence of these vibrant and extremely playful birds reminds us to take the time to see the beauty in everything, including the good in those we have yet to experience.

Known to be friendly and relatively good-natured, these exceedingly smart creatures tell us to value the importance of relationships and to recognize the friendships that we share with those we care for the most. Perceptive and knowledgeable, the parrot’s ability to memorize words and recognize sounds remind us of our talents and how much we can benefit from them if we learn how to channel our energy and efforts in using them to make ourselves and our current situations better.

Thriving better in large flocks, this loud screeching bird can be tamed around other animals as well as humans, making them great companions and pets. This serves as a reminder of how valuable it is for us to be a part of a group and to share our skills with the other members for its improvement as a whole. Highly revered as a symbol of vitality, parrots rarely get sick, highlighting our need to take good care of ourselves and to stay in top shape at all times.

Considered as luxury pets in some cultures, they are often associated with fertility, devotion, and fidelity as they are known to stay with a single mate for life. While their colorful feathers are perceived to represent the rainbow, they are seen by most as an embodiment of hope, encouragement, and giving a helping hand.

The Parrot as Spirit Animal

Revered as one of the most notable historical warrior rulers, Alexander the Great was among the first ones who found out about parrots as being domestic animals. Depending on the breed, these colorful songbirds can produce various types of sounds and could imitate the sounds from their environment, making it seem like parrots can communicate with us the same way that most speaking humans do. As a spirit animal, these social birds remind you to enjoy life and make even the fun of the most challenging and difficult situation. They instill in us the significance of looking at life’s brighter side, guiding us to relish the beauty and vibrancy that exist around us.

However, while they may seem to be filled with nothing but energy and enthusiasm, this amazing spirit guide provides us with the courage to face situations that seem difficult head-on and not avoid them. By giving us self-confidence, the parrot spirit animal helps us to be friendly and fun to those who are around, lending us enough of their playful nature that gives us the balance to be self-assured but never too proud.

These colorful birds’ ability to draw attention makes it natural for those who have them as a spirit guide to also be quite noticeable, not in a way where they seek attention, but because of their modesty and innate charisma. They are known to greatly develop our love for life, making us positive, creative, and open-minded individuals. These awesome animal guides serve as our reminder about how essential balance in life truly is. That taking a step back to relax and have a little fun is all part of our spiritual development and that you should indulge in life’s little pleasures.

Highly popular for their intelligence, this powerful spirit animal provides you with excellent awareness that allows you to be more resourceful and adaptable to your current situation. They guide us to gain great amounts of cleverness and determination which inspire us to never give up on our dreams easily. Parrots provide us with an admirable sense of focus and responsibility, giving us advice about the dangers of becoming too obsessed with pleasure for it can drive us to neglect the more essential aspects of life.

Fun-loving and almost always lighthearted, this socially adept and friendly bird of magnificent colors helps us to be more communicative which allows us to share our experiences with others, helping us to effortlessly make a connection and to adapt well to a new social environment. Parrots serve as our inspiration to spread positivity and optimism, traits that help us deal with the most difficult and perhaps impossible situations in ways that are better compared to what most people usually do.

The parrot’s tendency to constantly repeat things is an indication of how persuasive this animal spirit can be. Although not aggressive, such a habit drives us to accomplish our goals and serves as our spiritual guide to endure hard times. While their cheerfulness can be viral, parrots are quite emotional creatures and are moved at the sight of others suffering. Such pressing occurrences spiritually stimulate the parrot spirit animal to cheer you up and put you back on the right track.

The Symbolism of Parrots in Dreams

Though not as proficient compared to others, their ability to fly and bring them closer to the heavens encases parrots in a host of symbolisms particularly in dreams. While they may not be as physically adept at flying, their unique mastery of mimicry implies messages, talking, loneliness, and gossip. Loneliness – for the number of parrots that you dream of is the same number of people that are spreading rumors about you. Also, the colors that you see in your dream may greatly affect its meaning, wherein yellow can be interpreted as happiness and energy, green means healing, and red being instinctive.

Here are some of the possible interpretations when you dream of parrots:

Being one of the usual dreams about this bird may indicate a reconciliation that is about to take place between you and a family member or a close friend. Although awkward, the situation would finally be calm unless you once again disagree on whose fault it really was. In any way, parrots tell about the importance of communicating with the people around you to avoid and resolve certain issues.

Being destructive, whether for real or in dreams, could never be an indication of something good. Dreaming of such shows your affinity to argue and that you do not understand the positive side of constructive communication. While it incredibly shows your intolerance towards others, this dream comes as a reminder for us to change our attitude before it’s too late.

A Parrot Enters Your Home

Other than reminding you to keep your doors or windows closed, this dream serves as a warning about the people you allow into your life. It tells us to be more watchful on divulging things that are considered extremely important since people tend to take advantage of you being too open. Read more about birds in the house meaning here.

Aside from its ability to speak, the first thing that comes to mind when we think of parrots is their beautiful and colorful plumage. Naturally hued and vibrant, a visit from a multi-colored parrot in your dreams is an indication of your need to express your creativity and imagination, encouraging you to release your thoughts no matter your chosen field.

Dreams come to us bearing varying meanings. Whether it serves as a warning or an indication of which path to take, parrots, along with their awesome traits, can lead you to a better understanding of the good things and the ones that can bring harm.

Birds will always have a special place in Christianity and the bible. Often referred to as messengers from heaven, their ability to fly can be an indication of our aptitude to rise above the difficulties that we have, much like Jesus Christ. While parrots symbolize joy and happiness, qualities that define the events leading to the birth of the Messiah, they can also be an indication of gossip and betrayal. As the attributes that led to Jesus’ Passion and eventual death, these birds, though jubilant and spirited, provide us with a stern warning of the consequences of all our actions.

Native American tribes have long held a reverence for the parrot. The Pueblo tribe considered it to be a holy bird and used its feathers in rituals or ceremonies that related to healing, prosperity, and growth. It’s said that if you had enough of these feather symbols on your person at one time- including bracelets, leggings, headbands- then all eyes would turn towards you with awe as they recognized this individual was invested in the spiritual world.

The Hopi people often see the parrots landing nearby as an omen from their god Kachina who is known for his colorful appearance and sudden appearances before passing judgment on the living. Today many Native Americans incorporate birds into artwork prominently because of their ability to fly.

The Parrot is a symbol of communication and wisdom, so it’s not surprising that people from many Eastern cultures including Hindus, Buddhists, Jains, Sikhs and Muslims all view the bird as symbolic. Symbolizing what they see as qualities to be desired in oneself- or one with whom they seek an intellectual connection – Eastern religions depict this creature in both paintings (on walls) as well as sculptures (in gardens).

In Buddhism for instance there are four parrots perched on branches: these represent wealth; happiness; longevity; luck. The colors green and gold correspond to prosperity while red means passion or love– two things that come into play when considering how we humans relate to others during our earthly existence.

A flock of parrots is symbolic of the idea that there are many different viewpoints, or opinions. It also symbolizes creativity and playfulness (like the one in Lewis Carroll’s “Jabberwocky,”, which is symbolic of creating a community that values diversity and creativity).

The meaning of a parrot’s feather in various cultures is deep-rooted and rich with symbolism. Parrots are known to be very intelligent creatures, often seen as the animal kingdom’s closest equivalent to humans – which may account for their popularity in allegories that compare human life or intelligence.

Let’s take a look at some meanings and symbols behind this beautiful creature:

Their unrivaled ability to speak and mimic separates the parrot from its peers. Adorned with attractive and colorful feathers, they are an image of beauty, inspiration, and intelligence. While these birds teach us about the power of spoken words, this exceptional spirit guide has no doubt more to offer, if only we could quit chattering and delve deep into the parrot symbolism.