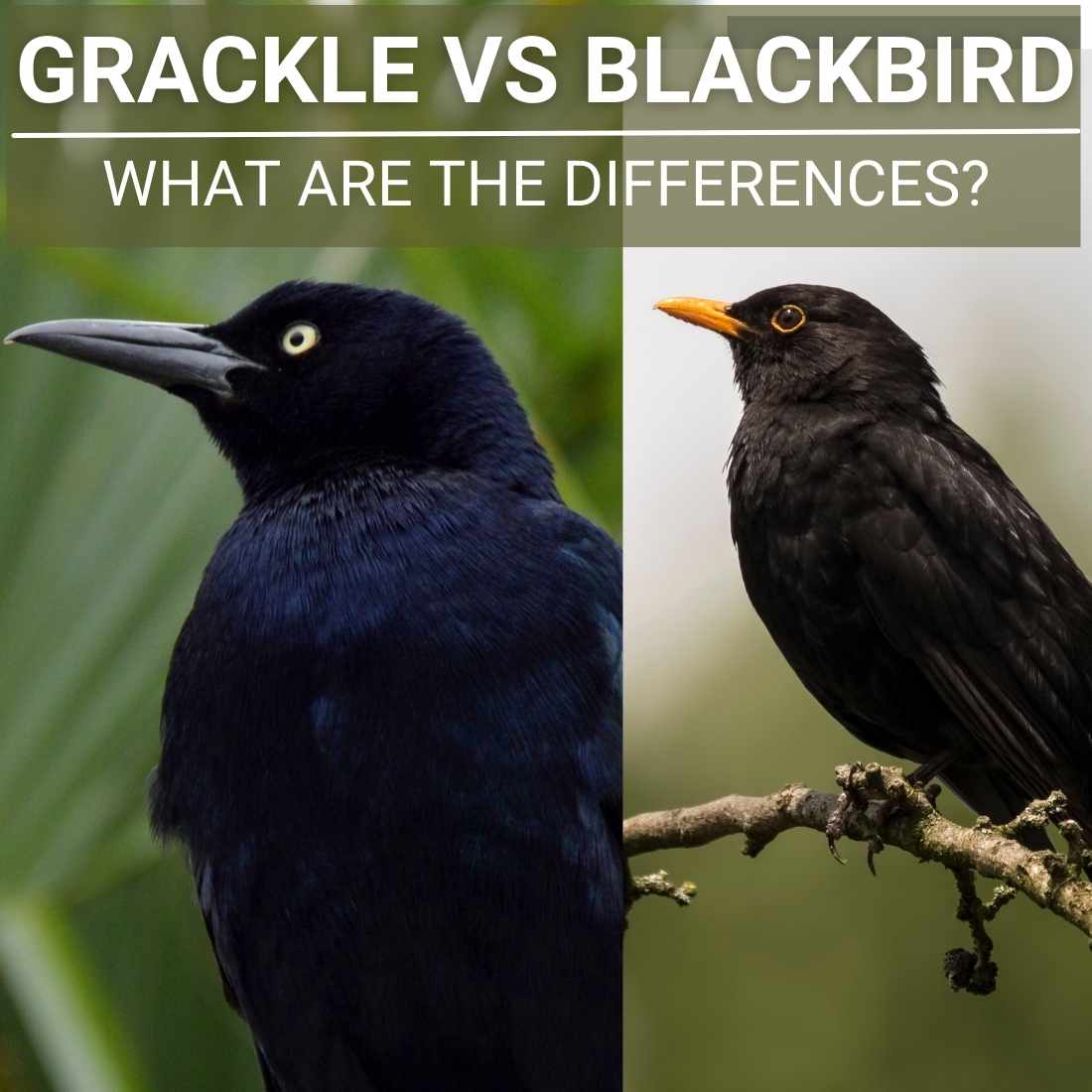 If you’re an avid birdwatcher, it’s likely that many birds with a similar appearance have caught your eye. But with somewhat similar size, shape, and even colors, how can you tell one apart from the other? With good observation skills, a focused technique, and quick research, you can learn the necessary skills to tell two similar-looking birds apart. Let’s look at two such birds that might look alike at first but vary in terms of characteristics: Blackbirds and Grackle Birds.

Differences between the Grackle Bird and the Blackbird

Blackbirds, on the other hand, are all black. Male blackbirds are jet black with a distinct yellow ring around their eyes. Female blackbirds, however, are dark brown and have traces of light brown on their chest. Young blackbirds look the same as adult female blackbirds but with copper-colored streaks. The size of their wings ranges between 10-12 and 14-15 inches.

Blackbirds breed in North Africa, Russia, Asia, and Europe, while the Grackle birds are predominantly spotted in North America.

Most often, you can see grackles in parks, fields, and lawns. They also like to stay in meadows, forests, marshes, and woodlands. You can spot blackbirds in parks, lawns, and wooden locations as well.

Most commonly, you can see grackles flying in large flocks above green fields and lawns. You’ll find them chattering away, resting on telephone lines and treetops. Their stiff wings help them ensure direct flight. Grackles search for food in shrubs and trees, but most often, they forage on the ground. Using their beaks instead of their feet, they look for food such as seeds and insects on the ground.

Male blackbirds like having control of the territory they breed in. Consequently, they chase away other male birds. Meanwhile, female Blackbirds compete against one another to find a good breeding place. Overall, Blackbirds are notorious for having an aggressive nature.

Different species of blackbirds share commonalities with the Grackle bird, especially when it comes to looks. Many people recognize them as birds that look like grackles. Their colors appear dark, but Grackle birds have iridescent heads that help viewers tell them apart. Even so, the most apparent factor is the difference in shape and size, which makes it easier to tell them apart. So if you see a luminous color, it is a Grackle. Meanwhile, Blackbirds have orange, yellow, or red patches on their wings, breast, or head.

A violent nature is one common Grackle Blackbird similarity. Grackle birds tend to fight with birds over their nesting territory, even with members of their own kind. They take over nests that are already occupied by other birds and their eggs. At times, they also kill adult birds and eat them up. Blackbirds, too, are aggressive when it comes to nesting time. Their females fight over a good nesting territory and chase away intruders that come their way. Their fighting behavior mostly includes a head bow and run strategy. Blackbirds threaten other birds if they have a smaller territory, but to find plenty of food, they can fly much longer distances.

Brewer blackbirds take others’ presence as a threat, especially when nesting, and don’t give up unless they drive enemies away. Male brewers have a more aggressive attack compared to female brewers and can strike when threatened. On the other hand, Grackles tend to fly and attack in flocks. They often steal newly born birds. A flock of Grackles arrives at the nest early in the morning, and while one starts a fight, the other steals the babies from behind. In a brewer’s Blackbird vs. grackle fight, the grackles are most likely to win because of intelligent fighting tactics.

Interesting Facts about the Grackle Bird

Grackle birds mostly croak, whistle, and squeak in high-pitch notes. Here is a video of how Grackles sound like:

Interesting Facts about the Blackbird

The Blackbird sings in a low-pitch, melodious voice, earning it the title of Beethoven. Here is a video of what they sound like:

We also compared the Grackle to the Starling in another post: Grackle vs Starling: What Is The Difference?