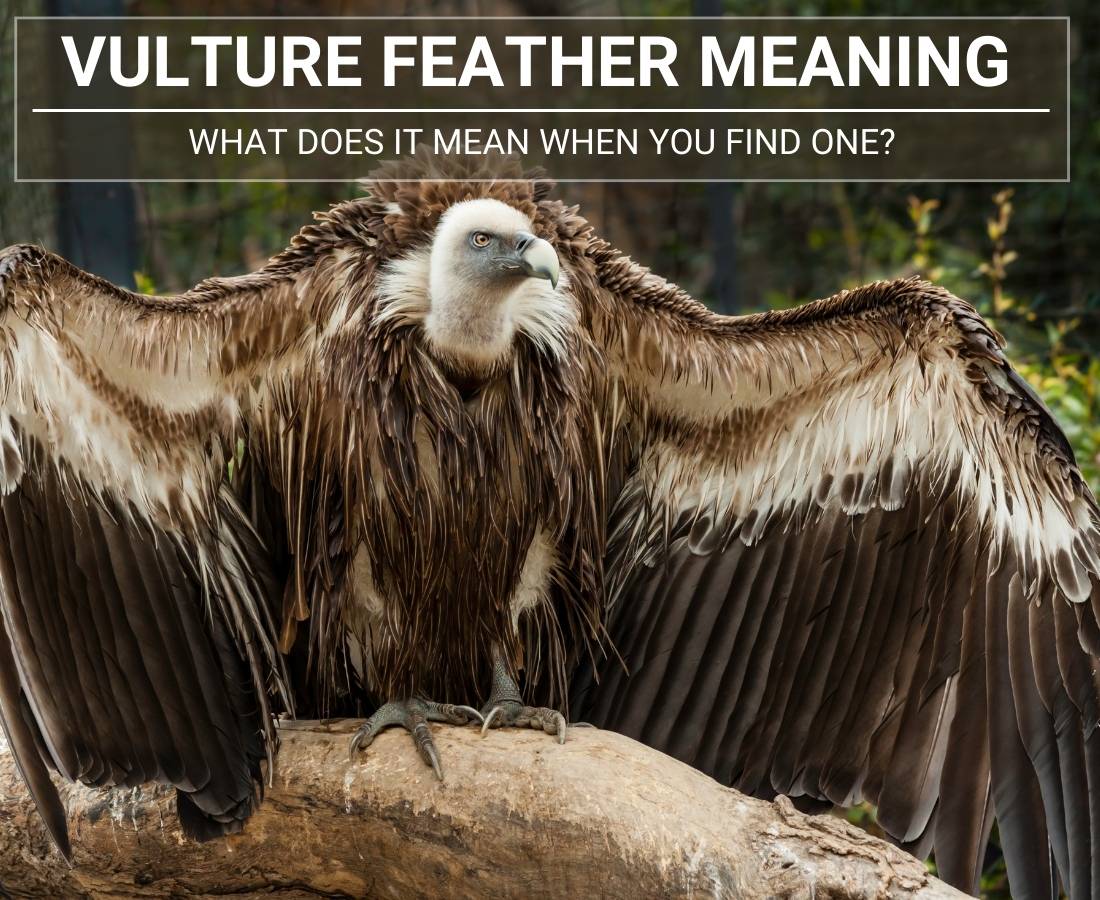 Vultures are relatively quiet birds, known for their ominous persona and taste for the dead. Finding a feather of a vulture is a special occurrence, and in this article, you’ll find what finding a vulture feather means, the cultural symbolism of these birds, as well as what it means to have a vulture as a spirit guide.

Vultures are often associated with death and destruction, but their feathers have a much more spiritual meaning. If you’re interested in learning more about these fascinating creatures, keep reading!

“Vultures are the most righteous of birds: they do not attack even the smallest living creature.”

Vulture feathers are black with a white band at the base. They are typically quite large, and their wingspan can reach up to 12 feet! There are various species, so find pictures of the most common ones in the US below. There are three species you may see in the United States: the Turkey Vulture, the Black Vulture, and the California Condor.

Vultures are scavengers, which means they feed on the carcasses of dead animals. This diet gives them a bad reputation, but vultures actually play an important role in the ecosystem. They help to keep the environment clean by eating diseased and dead animals.

Feathers have their own unique meanings, often being a reflection of the bird they fell from or also the color of the feathers.

Vultures have a PH of almost zero, which prevents them from getting sick from the dead animals that they eat.

Finding a vulture feather is a sign of protection. Just as the vulture was given internal protection, finding one of their feathers is a sign from the divine that you are being protected by an outside force.

Some vultures will stalk their prey, especially if they notice an animal is injured or close to dying.

Finding a vulture feather can represent the need for patience. What you desire will be yours, as long as you’re willing to give it the time to manifest.

Vultures are equipped with extra-strong wings, allowing them to glide through the skies for up to hours.

Their feathers symbolize the resilience it takes to scavenge the sky as long as they do until they are able to find something to eat.

Vultures are one of the most unique birds in the world. While they have modernly been associated with death due to their choice of food, they were much more cherished in cultures throughout history.

The Egyptian vulture was a beloved bird honored by the ancient Egyptians. They believed that vultures were a representation of motherhood and feminine energy.

Back then, it was common to believe that vultures were only female and came into life by egg–without needing a male counterpart. While these beliefs were false, this shows just how great femininity in nature was to these ancient people.

Certain Gods and deities within their culture were depicted wearing vulture feathers and even having the head of these magnificent birds.

The vulture appears in Greek mythology as well, this time in a much more adverse way. In a story involving Zeus, he is outraged by another god’s actions.

For his punishment, Zeus sentences Prometheus to be changed to a mountain where he is attacked by a vulture each day. The wounds would heal, but the pain inflicted would be continuous, happening each day onward.

Because of this story, the Greeks associated vulture feathers with a sign from Zeus and could even be seen as a sign that they were going against God’s wishes.

In Indian mythology, the vulture has appeared in the form of a Demi-God named Jatayu. The story depicts God as a giant vulture-like creature.

The demi-god was killed in battle, causing it to fall to the earth where he spent his last moment. Indian people have also given him the nickname “King of Vultures.”

“Don’t play dead with a vulture. That’s exactly what they want.”

A spirit animal is an animalistic being that helps guide you throughout different periods of your life.

If the vulture is your spirit animal, you may find its feathers out in nature when it is trying to show you a message.

Sometimes, the vulture wants to remind you of your own inner strength–directing you to find confidence within yourself to overcome a particular situation. Other times, the vulture may ask you to take a step back and let your desires come to you rather than try to force them into your life.

The next time you find one of these spectacular feathers, try to decipher what message the vulture is trying to show you.

Further reading about the vulture symbolism

For more information on these amazing birds, also check out this video!