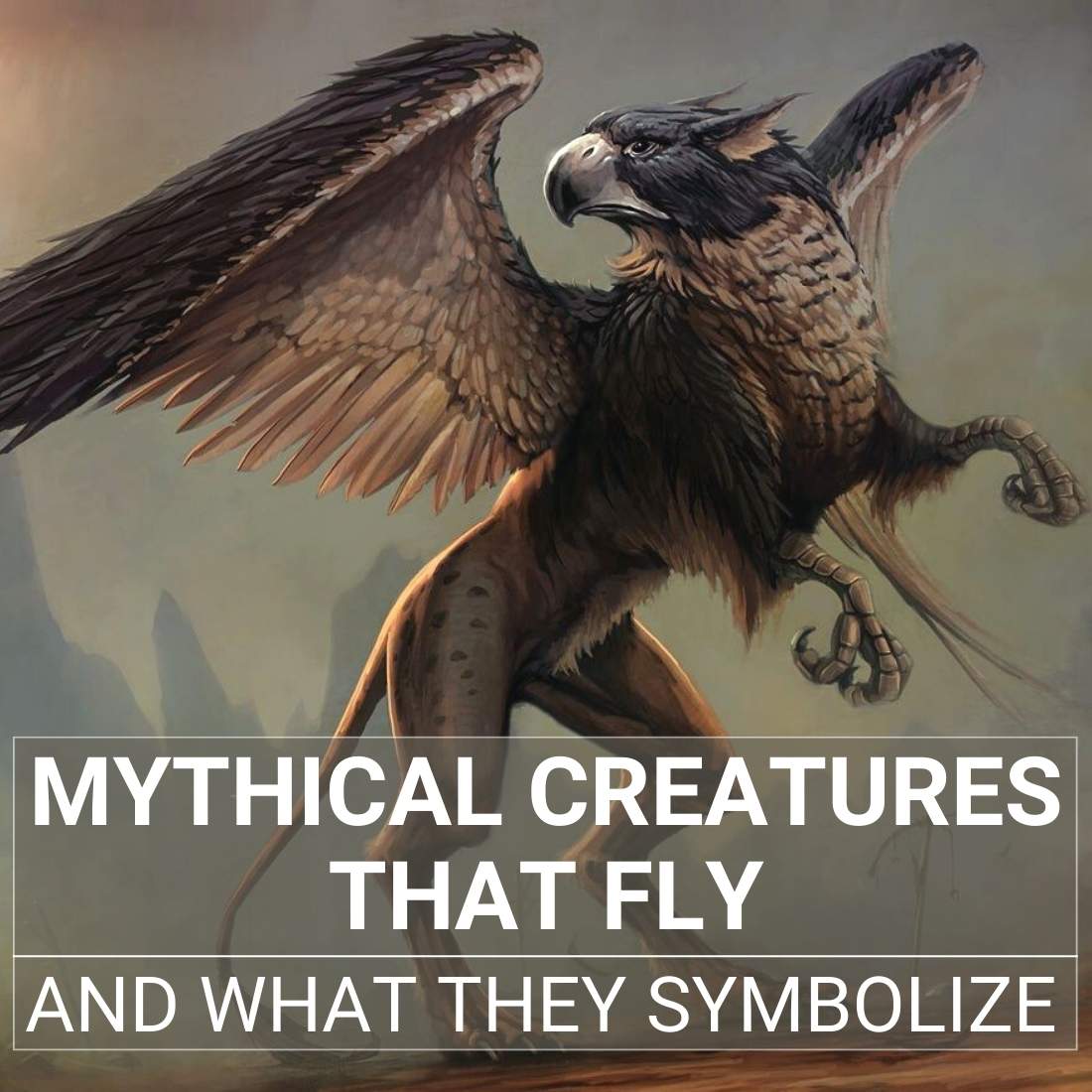 Mythical creatures that fly come in many forms, and they’re found throughout many instances of mythology and lore. These beings are favored because of the fear, magnitude, and creative nature that are associated with them.

“Hope rises like a phoenix from the ashes of shattered dreams.”

Do you believe in mythical creatures? The meaning behind these beasts has left an impact on many cultures, religions, and stories that are still passed down to us today.

Their longevity is due to their symbolism and meaning, which is often a reflection of humanity and the similar themes in life that we all face. Here are six of the most common flying mythical creatures in mythology.

Pegasus is known as a beautiful white-winged horse in Greek mythology. He is the child of Medusa and Poseidon and was born from the severed neck of the gorgon Medusa, slain by Perseus (I know this sounds a bit crazy, so read more here. Pegasus is associated with heaven and is said to draw Zeus’s lightning bolt chariot. He’s depicted with white, ivory fur and far-stretched wings similar to an angel’s.

Flying isn’t his only power. Pegasus also has the ability to create a spring of water by stomping into the earth. This ability symbolizes the rewards that using your inner strength can provide for you.

In ‘Peace’, a story by Aristophane, the Pegasus is a representation of immortality. His ability to fly symbolizes the soul’s infinite journey, soaring through the heavens and transcending life after death. The pegasus appears also on our list of famous paintings of mythical creatures.

How you can use the Pegasus powers in your life

The Pegasus teaches us about the infinite journey of our soul. He also symbolizes strength, beauty, and grace. If you’re ever feeling lost or disconnected from your spiritual side, call on Pegasus for guidance.

The Pegasus can also help us connect with our creative side. If you feel creatively blocked, ask Pegasus to help you open up and see the world in a new light.

“…Vaulted with such ease into his seat, As if an angel dropp’d down from the clouds, To turn and wind a fiery Pegasus, And witch the world with noble horsemanship.”

The phoenix is probably the star and most famous one among the mythical creatures that fly; it’s a mythical bird made of fire. The origins of this bird are linked to Ancient Egypt. Herodotus, a Greek writer in ancient times, described the phenomenon of a magical bird that visits the country every 500 years.

A phoenix’s life span is debated, but they often live for 500 years or more. When this bird dies, its body decomposes and turns to ash. From there, the bird is able to be reborn from its ashes and live another lifetime.

How you can use the Phoenix powers in your life

“What matters most is how well you walk through the fire.”

The minokawa is a bird-like creature whose origins stem from Filipino culture. They describe the bird’s appearance as being strong and mysterious. It has mirrored eyes, sword-like feathers, and a body made of metal.

How can you use the Minokawa powers in your life?

The minokawa is a powerful symbol of destruction. Call on this creature if you feel like you’re stuck in a rut and need to make a change. The minokawa can also help us to let go of our attachments. If you’re feeling attached to something that’s no longer serving you, ask the minokawa to help you release it.

Fairies are commonly found in Irish folklore and are often mischievous little creatures. Fairies were first described in the 13h century. While they have been depicted in many forms, their most traditional image is of a miniature human-like being with wings.

These fairies live in trees and are guardians over the forests. Cutting down trees or disturbing nature is believed to be a bad omen, and fairies may play tricks on you in acts of revenge.

How you can use fairy powers in your life

Fairies are a powerful symbol of the need to connect to the earth, otherwise known as being grounded. Call upon fairies when you are feeling ungrounded, and ask them to help reconnect you to nature and become more balanced and whole within yourself.

One of the most magnificent mythical creatures that fly and is a raptor at the same time is the Griffin. A griffin is a half-lion, half-eagle beast that is found in many forms of mythology in Ancient Egypt, India, and Europe.

Griffins are depicted as carrying the chariot of Apollo and Nemesis. They’re also associated with treasures and fortunes and are often considered to be guardians of tombs.

The griffin was once a symbol within Christianity. Griffins mate with one partner for the entirety of their lives, symbolizing a sacred union between the two creatures. Christians adopted their image to help represent fidelity and marriage.

How you can use the Griffin powers in your life

The griffin is a powerful symbol of protection. If you’re feeling vulnerable, ask the griffin to help you feel safe. This creature is also associated with treasures and fortunes, so use that power to manifest your heart’s desires. Take your chances and go for it! Hamsa Neckace – 925 Sterling Silver
4.5
$37.99
Check on Amazon
The evil eye necklace is one of the most prevalent protective amulets in the world Swarowski Symbolic Evil Eye Pendant Necklace
4.8
$115.00$80.50
Check on Amazon
The classic cross is among the most widely used protective symbols

Dragons are the most famous flying mythical creatures. These winged beasts resemble dinosaur-reptile hybrids, with wings big enough to soar through the heights of the heavens. While their true origins are unknown, their origins are believed to be in Ancient Greek mythology and the Sumerians in Mesopotamia.

Christianity adopted the dragon and began depicting it more closely to the serpent. This figure was associated with sin and evil. The Book of Job in the Bible describes a monster-like creature that is likely related to a dragon.

Many people believed in the existence of dragons during medieval times because of their presence in the bible.

In J.K. Rowling’s Harry Potter series, many winged creatures have made an appearance in both the books and the movies.

A phoenix named Fawkes first appears in The Chamber of Secrets. This bird is associated with Dumbledore, the headmaster at the Hogwarts School of Witchcraft and Wizardry. The phoenix is seen going through different cycles of life and death and offers its magical assistance to ward off evil.

Dragons make their appearance in The Goblet of Fire. Harry, the main character, is entered into a contest of life or death. He is required to battle against a dragon and almost loses his life. In this instance, the dragon symbolizes destruction and opposition.

Lord of the rings

In The Lord of the Rings, there is a winged creature called a Fell beast. The Fell beasts are very large beings that give off a foul smell and have horns for fingers. They were ridden by Nazgul, otherwise known as “night riders.”

These creatures weren’t inherently evil, but when they were associated with Sauron.

“The burned hand teaches best. After that advice about fire goes to the heart.”

Game of Thrones is no stranger to flying creatures. In the series, a queen named Khaleesi has nicknamed the ‘Queen of Dragons’. Khaleesi was given the last three known dragon eggs on the planet.

Khaleesi magically hatches the dragon eggs and becomes the mother of three dragons. They were the only known beasts of their kind and became a vital part of their mother’s army. In the last season, one of her dragons is turned into a night-walker, becoming a zombie-like form itself.

Flying creatures are one of the most common creatures found throughout history and modern media. These beasts are often associated with chaos and wildness, but their strength and wings also make them a powerful symbol of freedom and vigor.

Freedom is too important, hence we also wrote an article about birds that represent freedom – check it out here.