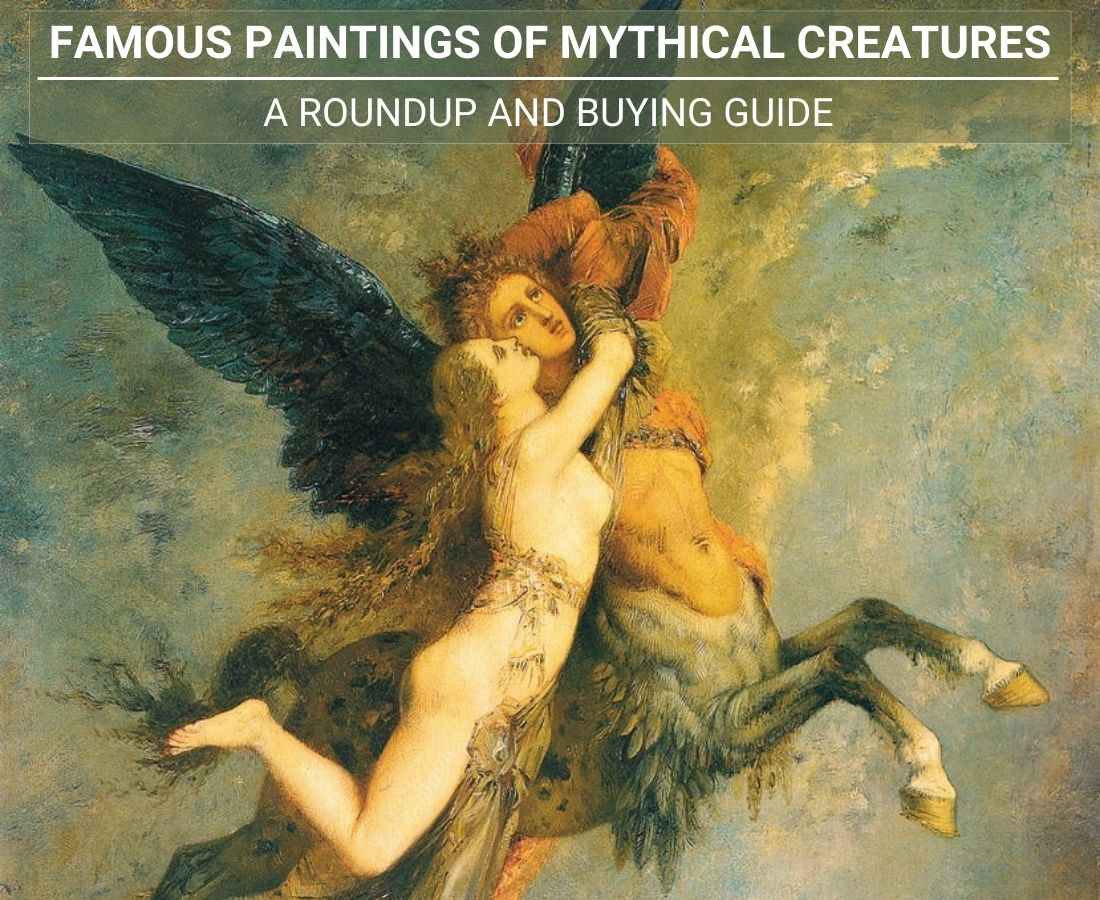 If you’re a fan of mythical creatures, you’re going to love this roundup of famous paintings featuring them! From dragons to unicorns, these paintings are sure to amaze and enchant you. Not only that, but we’ve also included a buying guide so that you can get your hands on one of these masterpieces for your very own collection.

For centuries, the images of mythical creatures in art have captured our minds. Many people believed that these otherworldly beasts were real as stories of these often attractive but sometimes destructive animals spread through writings, sculptures, paintings, and films.

While their imposing appearance is (thank God!) purely symbolic, their presence in the living rooms of the past has indicated a particular household’s values, fears, and desires.

From the colorful and appealing to the dark and disturbing, let’s dive into our list of famous mythical creatures paintings.

What better way to kick off than with what is perhaps the most popular mythical creature ever? While some see dragons as harbingers of chaos, destruction, and all things evil, several cultures view them as symbols of power, wisdom, and strength.

Whether you couldn’t put the Lord of the Rings books down or were completely engorged by Game of Thrones, this rare image of a dragon highlights the ferocity and protective nature of such a relentless creature.

William Blake, a romantic poet and visionary artist, presents a dramatic painting depicting a cosmic conflict between good and evil – a real stunner in my eyes!

The Phoenix by Katsushika Hokusai

Perceived as an immortal bird with rich mythological origins, the phoenix symbolizes healing, immortality, rebirth, and renewal. Many people believe that this mythological creature originated in Ancient Egypt. However, it was the ancient Greek historian Herodutus who first mentioned that the Egyptians worshipped a bird that burned itself every 500 years, only to re-emerge from its ashes.

Created by renowned artist Katsushika Hokusai, his work “Phoenix Glaring in All Directions” shows the mythical creature in a loop with its multiple eyes looking indiscriminately. Not only does having this image on your wall invite the kind of growth that drives success, but it also encourages prosperity, longevity, and never-ending opportunities.

Pegasus by by Odilon Redon

From its birth from its mother’s severed head to becoming the favored winged horse of Zeus, the pegasus has always been an interesting creature associated with the majesty and mystery of water. Because of their ability to transcend both air and land, they have become symbols of freedom, courage, and artistic inspiration in many cultures.

Known for its courage, beauty and ability to soar through the air, this Pegasus painting can enhance the aesthetic feel of any room. While Greek mythology tells us how the Pegasus came from a humble and somewhat unsightly beginning, a gorgeous image of it will inspire anyone to believe in the gifts they own within.

The painting is currently exhibited at the Guggenheim Museum in Bilbao, Spain.

The unicorn in captivity by Unknown

Whether you are a fan of ancient mythology or you just can’t get enough of the amazing colors they display, people, particularly little girls, have been fascinated by these majestic creatures. Commonly depicted as a horse-like animal with a single horn, the unicorn symbolizes innocence, gentleness, and purity.

Taken from the “Unicorn Tapestries” or the “Hunt of the Unicorn,” a series of woven hangings that date back to 1495–1505, this colorful and attractive piece effortlessly adds a hint of fantasy to your living space (and is my favourite among the famous paintings of mythical creatures).

While your daughter may wonder who would want to hurt such a gentle and magical creature, getting this painting will surely be an ideal conversation piece for when you invite guests over.

This famous painting of a mythical creature is shown at the world famous Met museum in New York.

Centaur with Trident by Pablo Picasso

Recognized as a popular hybrid creature that features the lower body of a horse and the chest and head of a human, the centaur originated in Greek mythology and is regarded to be a symbol of masculinity, courage, and loyalty.

Believed to have been born out of trickery after a human king named Ixion fell in love with Zeus’ wife Hera, stories say that these strong creatures boast a violent and bloodthirsty nature.

However, as the centaur’s image has been romanticized in contemporary art, popular culture has allowed them to gallop their way into modern-day artistic works. Reproduced as a sharp and vivid image, this high-quality art print allows you to adorn a corner of your house with a quality piece that you can get at a very reasonable price.

Showing a trident-wielding centaur that looks to be overseeing creatures in captivity, a reproduction of this Pablo Picasso classic will keep your living space attractive, night and day.

The Chimera by Gustave Moreau

Known as a mythical creature that has provided countless temples with symbolic character, the chimera has long represented a handful of spiritual meanings for humans. Often shown as a creature with a lion’s body, the head of a goat, and a tail that ends with the head of a snake, this hybrid monster in Greek mythology was believed to ravage lands with its fire breath.

This remarkable piece, originally created by Gustave Moreau in 1867, shows the creature in a more romanticized approach. Adding it to your collection will prove to be a formidable decision, for it brings to your home the powerful link between the virility of a goat, the intelligence of a serpent, and the dominance of a lion.

Often shown as a three-headed dog chained at the gates of hell, Cerberus’ primary task is to keep anyone from ever leaving the underworld. While the poet Hesiod once suggested that this gigantic creature featured up to 50 heads, more people bit into the belief that one head of the dog represented the past, the other the present, and another the future.

This classic piece shows Cerberus guarding the gates of the underworld while Jesus calls on the souls of the chosen. Although your dog-loving friend may not be as enthusiastic as you thought they would be when they see this digital print, you can simply assure them that no animals (or humans) were actually harmed in the creation of this work of art.

Often illustrated as a giant with a single eye, cyclops are one-eyed monsters that never show fear, even when in the presence of the gods. While they display an amazing ability to tend to sheep and goats, their habit of dwelling in caves with their wives and children, as well as their insatiable taste for meat, including that of humans, have caused people to scorn and fear them.

So, why would you welcome the image of such savage creatures into your home?

This creative piece, titled “Cyclops 7th Voyage of Sinbad,” describes just how beauty is in the “eye” of the beholder.

Ray Harryhausen’s Dynamation FX in the legendary Cyclops from the classic film “The 7th Voyage of Sinbad.”

The artist’s handwritten signature appears on the unique, one-of-a-kind acrylic painting that was created on acrylic paper.

This picture was created for the book’s cover image, “Giant Monsters of Filmland,” which was released by We Belong Dead Publishing in 2021.

Perhaps one of the most popular female characters in mythology, Medusa is known for the venomous snakes that make up her hair and her ability to turn anyone to stone if they muster the courage to stare. Legend has it that the hero Perseus used her own wicked powers to trick and behead her, giving the head to the goddess Athena to place on her shield.

This contemporary depiction of that slaughter boasts a much friendlier tone than its classic counterparts, making it a lot easier for guests and family members to check it out and “stare.”

Alternatively something more “substantial”: The Head of Medusa, circa 1618 by Peter Paul Rubens

Throughout history, mermaids have had an extraordinary charm that has captivated humans. Believed to possess a human body and the fins of a fish for legs, several ancient cultures perceive that they are lovable creatures, capable of transforming into humans and capturing the hearts of men.

The most famous paintings of mythical creatures of a siren is Ulysses and the Sirens by Herbert James Draper, he was considered a Pre-Raphaelite because of his unique impressionistic style. This work shows how Odysseus spared his crew from being tempted by these creatures with wax plugs in their ears so they would not hear music or see anything else aside from what was necessary for survival such as food supplies on land while being marooned during sea voyage lasting ten years plus–until finally making it home safely after battling monsters along side godlike Greek heroes like Achilles who had vital roles throughout Trojan War.