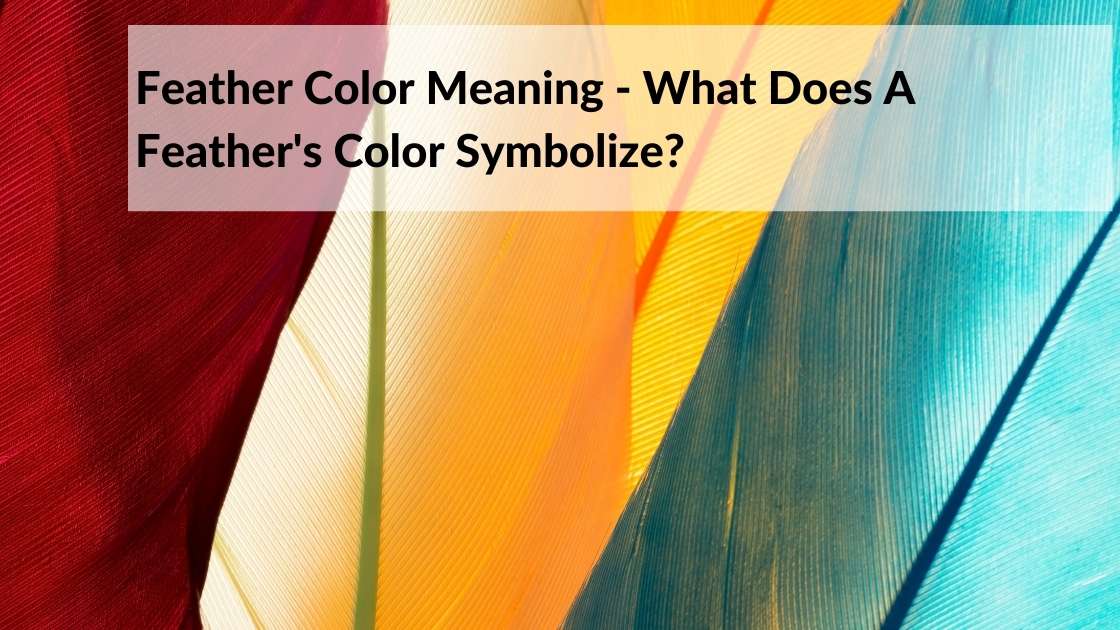 There are times when we find feathers in different shades lying here and there. Sometimes, the feathers may drop from the sky directly in your vicinity. If you are a non-believer, you may think that it’s no big deal and that the feather may have fallen from a bird’s tail randomly. If you, however, believe in the spiritual working of the world, finding a feather means a lot more. This article will help you understand the spiritual meaning of feathers and the significance of the color of the feathers you find.

However, please bear in mind: The meaning and symbolism of a feather’s color is dependent on the species – it cannot be interpreted on its own. For instance, a peacock feather might be seen as an omen for luck or love because it is believed that finding one brings good luck. A brown hen may symbolize wisdom because they are known to be intelligent animals with a lot of knowledge to share. In some Native American tribes, turkey feathers had a strong meaning and were used in ceremonies honoring warriors who died in battle. And blue jays are often associated with happiness because they’re beautiful birds that bring joy wherever they go!

The spiritual meaning of feathers

The Native American culture was one of the first to have a rich history of symbolism with feathers as they believed that each type brought with it different powers and characteristics. For example, blue jay feathers were often given to children to bring them happiness while turkey feathers symbolized wisdom because these birds were known to be intelligent and wise.

Another Native American tribe believed that all the great spirits were represented by a different colored feather. For instance, a red feather was believed to represent love and peace while white feathers symbolized purity and innocence.

Many early cultures used bird feathers as part of their spiritual practices including the Greeks, Egyptians and Romans who often adorned statues with colorful feathers. The Aztecs even wore golden headdresses made from dozens of different types of bright feathered birds such as parrot plumes, turkey tail feathers, macaw wing tips and quetzal plumage.

Feathers are often associated with the sacred and divine powers of the universe. They are considered to be a sign of acknowledgment from the spiritual realms that your prayers are being heard and answered. It conveys that someone up there is looking after you and keeping you safe and empowered on your journey. If you find a feather flying and making its way to you, know that the angels are near and they are protecting and guiding you.

Different angels have their own unique color of showing signs to human beings. So if you find varying colors of the feathers, then the angles might be pointing towards something more specific.

Gray color signifies the balance between two extreme ends of the color spectrum. In the same way, the gray feather meaning symbolizes a combination of emotions and energy. It shows that you are leading the path to enlightenment and spiritual wisdom.

Others say that a gray feather symbolizes wisdom, integrity, and security. It is a sign that things are as they should be. It is also said to represent tranquility, stability, and maturity.

A gray feather brings with it the meaning of wisdom and integrity. In fact, people who find one in their path can be assured that everything will turn out just fine. A grey feather found on the ground is a sign that you have been given the opportunity to move forward into a new phase of your life with peace of mind and sanity intact. It also symbolizes security since it suggests nothing will bring undue stress or confusion into your life right now – you don’t need to worry!

White feathers are generally interpreted as the symbol of peace, love, light, and protection by the purest angels of the universe. It conveys the message that everything will be right very soon. You can expect the cleansing of your life as all the negative energy will vanish away from your surroundings.

A white feather also symbolizes purity, innocence and holiness. It is a sign that you should feel free to move forward with your life as it brings goodness and happiness. The fact that it’s found in nature suggests transparency and honesty, which means the time to come will be an open one where everyone will be deserving of the truth.

If you find yourself being given this type of feather by someone you know or perhaps simply notice one lying on the ground consider it a blessing for all good things are headed your way once again! You have been through too much strife lately -it’s time for some peace and tranquility in your life once more!

Black feathers symbolize the defensive mode of the angels. It means that you are being protected by all the evil powers and negative energy trying to invade your growth and happiness. You may feel lonely at this time, but the angels are watching over you and asking you to stay there and wait for the positive results to come your way.

Sometimes, finding a black feather may mean that the loved one who you lost recently is looking over you and guarding you against the evils. It may also mean that your angel is blessing you with knowledge and wisdom so that you will be able to embrace the insights coming your way.

Others say a black feather symbolizes death, sorrow and mourning. It is a sign that things are not as they should be in your life. You may need to make changes that could lead you to a better place.

It is said that the darker the color of a black feather, especially if it’s found alongside other feathers or on its own, then the worse off you are. It represents sadness since it means something terrible has happened or will happen soon, like someone close dying from disease or being killed by another person in an accident maybe? If this is the case then you should do everything you can to avoid any more sorrow entering your life right now!

Feathers are believed to be signs from the spirits who guided by witches and magicians can take human forms. A black feather was seen as an omen of misfortune and if one finds it, they should bury it right away under the threshold of their house. The burying drives the evil (in this case- death) away and protects the home and family from destruction. Medicine men wore feathers of such color on their headdresses during rituals to protect themselves against evil spirits’ influence.

One of the most common feathers to find comes from the Crow, check here for the article: Crow Feather Meaning: Light and Dark.

Brown color marks the existence of someone who has a free soul but is grounded and calm. It shows stability and balance. The balance can be seen in someone’s career, personal life, or sustainable living. So if you find a brown feather, it means that the angels are asking you to live your life freely. It shouldn’t mean that you should do something so freely that death comes to you. It means that you should live freely while setting healthy boundaries for yourself.

A brown feather also can symbolize knowledge, strength and wisdom. It is a sign that things will begin to turn around for you soon and everything will be alright again.  The further away from the bottom of the feather to it’s tip, the better off you are -the future looks brighter! If it appears alongside another type of feather then miracles are in your near future too since brown feathers suggest serenity, creativity and radiance as well as contentment .

Seeing a blue feather may mean that your angels are asking you to accept certain changes in your life for you to reach the higher calling of the divine. It also means that your angels want you to pay more attention to the positive changes and inspirations in your surroundings.

A Blue feather can also symbolize love, harmony and happiness. It is a sign that you should reconsider your current situation.

It isn’t necessarily bad to find a blue feather on the ground or appear alongside other types of feathers in your path but it does suggest you may be deluding yourself about something that will lead to unhappiness in the future. A blue feather found outside means there’s trouble brewing -people are not being honest with themselves or others which can be damaging to all concerned.

One of the most beautiful feathers comes from the Blue Jay, check here for The Blue Jay Feather’s Symbolism and Meaning.

If you spot this type of feather anywhere near your home this doesn’t necessarily mean there’s going to be any issues for you later on -you don’t have anything to worry about right now!  However, if someone gives it to you then they do have concerns about your wellbeing and just want you to be aware of it. They don’t want you to go through what they think you might at some point in the future!

An Orange feather symbolizes energy, passion and radiance. It is a sign that things are going to get better for you in every way over the course of time if you allow them to. If this type of feather appears alongside another then expect good things in love, health and wealth soon enough – the best is yet to come!

A red feather is a sign that you have been through hard times recently and your situation will improve in the near future -if you want it to.

You might be feeling desperate about where your life is right now which won’t get you anywhere so take time out for yourself and allow for new opportunities to arrive. A red feather appearing in your dreams or on the ground outside means there are lots of lucky people around who appear content with their lives. You don’t need to worry about anything if this happens because everything will work out fine for you soon enough.

A violet feather symbolizes life, serenity and peace -it’s a sign that all your problems are finally over!  If you’re having trouble dealing with something or someone in particular then this type of feather appearing anywhere will mean help is coming from an unexpected place. Someone who has already been through what you have will be there to support you right now if they can -this person is wise beyond their years so listen carefully to what they say!

The higher up towards the tip of this blue-violet coloured feather the more optimistic you should feel about the future since it means good luck will soon be on its way to you!

The striped feathers simply indicate regeneration and a strong connection with the angels of the universe. There may be some unexpected changes in your life in terms of career, family, and relationships. You can feel the shift in the air when these changes approach your life.

A multi-colored feather meaning symbolizes protection from evil spirits and negativity. It is a sign that all negativity surrounding you should leave now so that good can fill your life once again. The more colors present on said feather, especially pale ones like white or light blue, then the better off you are -they signify purity and truth of intentions.

Remember though that even though this type of feather means your life looks set fair right now there will always be issues lurking around every corner just waiting to appear.

Perhaps the most beautiful multi-colored feathers (and feathers in general) comes from the Peacock; check here for our article: Peacock Feathers: Meaning and Symbolism.