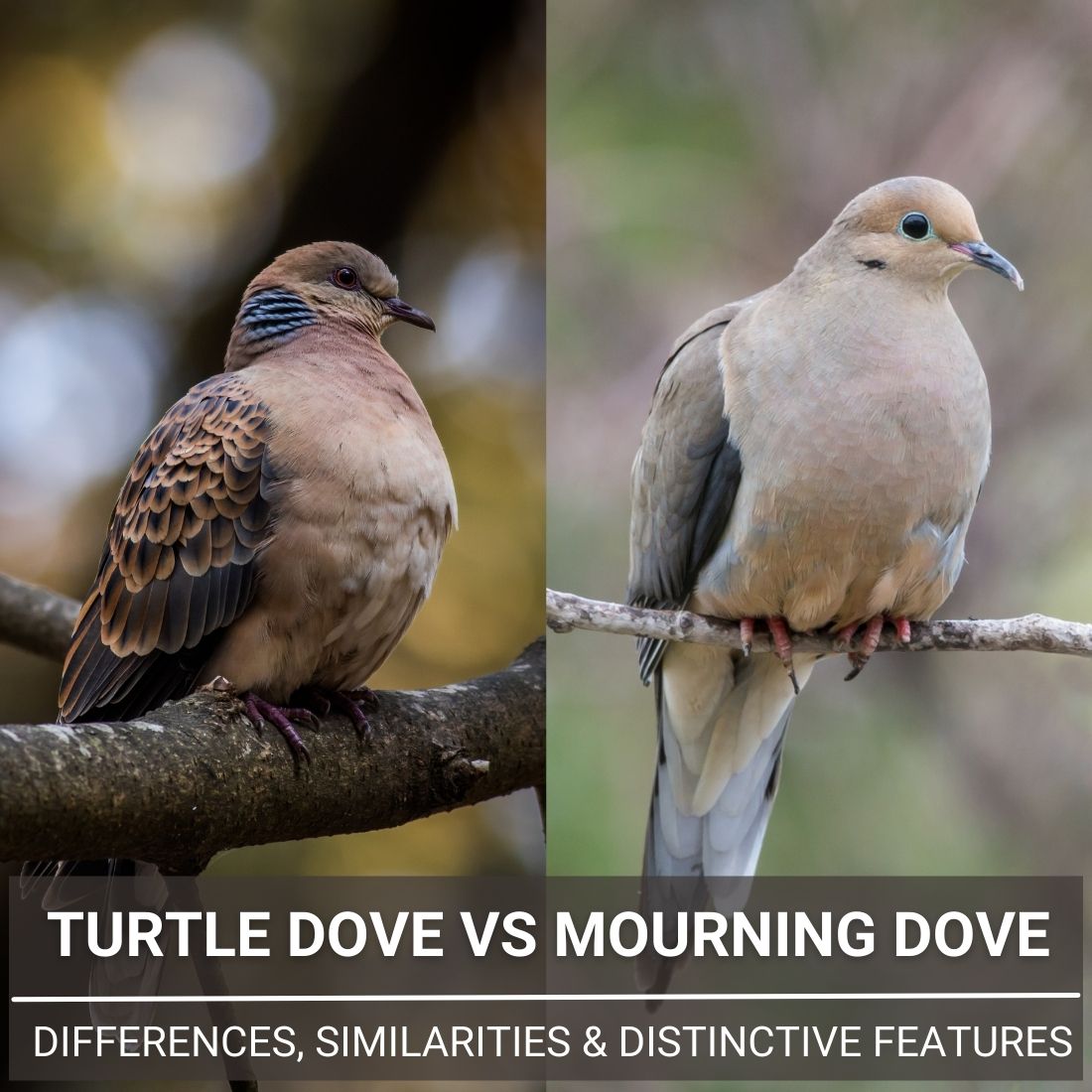 Turtle Doves are similar in size and form to Mourning Doves but have distinctive field markings. Turtle dove has warm cinnamon wings with a white and black collar stripe, while Mourning dove has a brownish to shiny tan overall, with black patches on wings and tail feathers.

Overview of the Turtle Dove vs Mourning Dove’s

Turtle Doves are distinguished by their orange eyes and a black and white striped pattern on their necks. The tail of this species is black with a small white border. They have diamond-shaped wings that are brown and black in color. Their head and breast have a beautiful grey-lilac color.

In contrast, Mourning Doves have a delicate brown to buffy-tan coloration throughout, with black patches on the wings and white ends to the tail feathers that are bordered by black coloration.

Turtle doves may be found throughout Europe, as well as in areas of Asia, the Mid East, and Africa. Foraging grounds for members of Turtle Doves include woodland or forest regions with a choice of open pastures or fields for them to choose from. They may also be found in grassland, shrub woodland, and semi-arid environments. In comparison to other dove species, their habitat preferences are a little more rigorous. They are pretty timid and tend to avoid urban areas, although they may forage in agricultural farmland if given the opportunity.

On the other hand, Mourning doves belong to North America and can be found there. Besides southern Canada and the southwestern United States, they may be found in the Greater Antilles, the Atlantic islands of Bermuda, southern Mexico, and in some areas of Panama. These birds like open and semi-open environments, which include urban and suburban areas, grassland, meadow, fields, and light woodlands, among other things. They may be seen in the vast countryside, along with roadside barriers, and on atop telephone poles.

Turtle Doves Instead of eating snails or insects, prefer to graze on grains such as rapeseed, maize, canola, mustard, and other types of flowers and plants. They will even ingest a small amount of grit or sand from time to time to aid with digestion if necessary.

While Mourning doves eat primarily plants, which make up the majority of their diet. They primarily consume a variety of grasses and cereal seeds, which account for 99 percent of their total caloric intake, as well as snails and insects on occasion.  They prefer to consume what is easily visible on the soil or plants since they are ground foragers.

Turtle Dove pairs built their nests of twigs and sticks of various sizes and shapes. It is more common for them to make their nests in woody plants rather than on the ground, as is the case with several dove species. Females lay two eggs in a batch, and both members of the couple are responsible for incubating them.

Turtle Doves lay eggs after 14 days, and the chicks leave the nest once they are approximately three weeks old. These birds will lay a second clutch of eggs and nurture another brood after they have successfully raised their first.

When the mating season is over, tiny groups of birds graze on the fringes of woods and woodlands for berries and insects. Turtle Doves are diurnal, which means they are active during the daytime. Occasionally, big groups of Turtle Dove may assemble around a plentiful food supply. During migration, huge groups of doves congregate in order to traverse longer distances. Once the partners have established themselves in their breeding grounds, they become less friendly with their neighbors.

On the other hand, Mourning Dove’s cry is a quiet, drawn-out, sorrowful perch-woooo sound that is readily and frequently confused for the call of an owl due to its similarity in pitch and tone. It is the male dove who makes the wooing call in this context. A pair’s bonding ritual involves gentle nipping around the neck, which progresses to holding beaks together and bouncing their heads up and down in sync.

It is common to witness Mourning Doves panting when it is hot, as they are unable to sweat and must thus consume large quantities of water, which they take in via their beak.

Their takeoff and landing are lightning quick and precise. During the non-mating season, they congregate in large groups on trees. Their sleeping position differs from many other species in that they lay their necks between their shoulders, near to the body, instead of curled beneath the shoulder feathers. In order to divert predators’ attention away from the nest, Mourning Dove would pretend to be hurt and flap on the soil at a distance.

The Turtle Dove and the Mourning Dove are both fascinating small birds to watch. Both have the same shape and size, and both birds live in huge groups. They have beautiful feathers, and they migrate long-distance during colder months. And finally, both of these dove species belong to the same family, i.e., Columbidae.

Known for its extensive migrations, the European turtle dove is known for migrating more than 10,000 km between Europe and North Africa. As a result of a decline in food supplies throughout the winter, these birds travel to overwintering sites searching for sustenance.

Here you can check all Turtle Dove sounds

When mourning doves grab a grain/seed, it is not always because they intend to consume it. They usually keep it in their crop, which is an expanded portion of their esophagus.  In this way, they will be able to digest the meal later. It is typical for mourning doves to “park” on their feeder or birdbath since they are processing their food.

Other interesting facts about Mourning Doves include the following:

Here you can check all Mourning Dove sounds

Turtle Doves have orange eyes and a black and white striped neck. This species’ tail is black with a white border. They have brown and black diamond-shaped wings. Their head and breast are stunning greyish-lilac in color.

Mourning Doves are brown to buffy-tan in hue with black patches on the wings and white tail feather tips edged by black coloration.

Both Turtle Dove and the Mourning Dove are wonderful tiny birds to watch. Both birds are similar in size and form and dwell in enormous flocks. They both have magnificent feathers and migrate considerable distances in the winter.