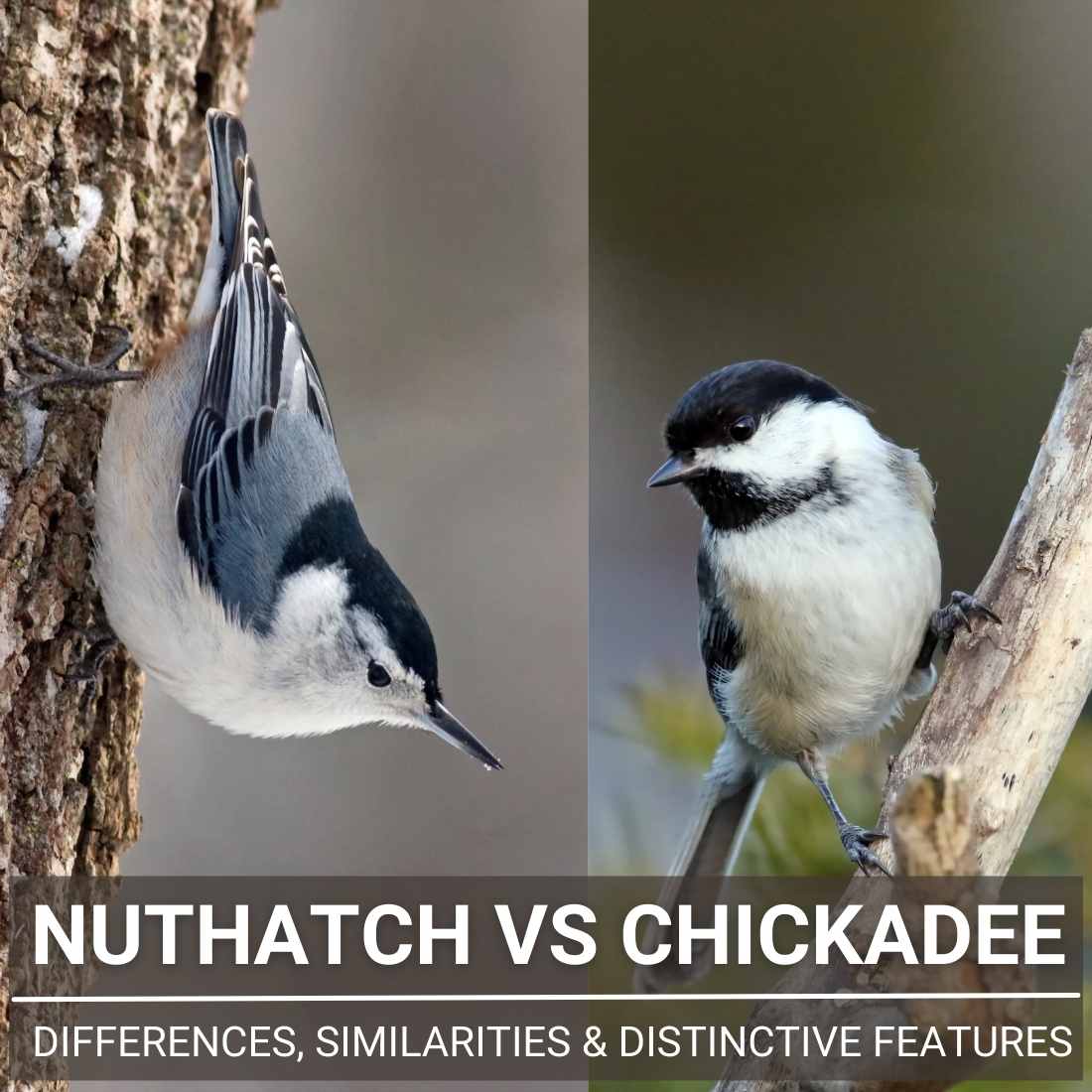 The Nuthatch and the Chickadee are both entertaining small birds to watch. Both chickadees and nuthatches are commonly found in Oregon or Southern states. Both have small, powerful bills, and they eat primarily on insects. Aside from it, they are most often observed in pairs.

Take a look at the summary provided below to see how the Nuthatch and the Chickadee differ from one another.

Differences between Nuthatch vs Chickadee

While most nuthatches nest in temperate or montane woods in the Northern Hemisphere, some species have evolved to rocky environments in the hotter and drier areas of Eurasia. However, the most incredible diversity can be found in Southern Asia, and because of the similarities between the species, it has become difficult to distinguish between them. All species of this genus build their nests in cracks and fissures.

On the other hand, Chickadees can be found in temperate and mixed trees, particularly at forest margins, and in mixed deciduous-evergreen forests. They are frequently seen in the surrounding of willows and cottonwoods, and they like to build their nests in the trunks of alder and birch trees, among other places.

Nuthatches are distinguished by their more petite tails and larger bills compared to chickadees. The White-Breasted Nuthatch (WBC) is by far the most common of the nuthatch species, and it may be found in woods, gardens, and backyards all across the United States of America. This bird has a black crown, similar to a chickadee’s, but its face and neck are white, and its wings are blueish gray in color. Their lower belly may be colored brown or orange, depending on the species.

The mating season for red-breasted nuthatches is spent in the northern hemisphere. In addition to a white forehead and a dark eye stripe, you should look for a pale orange breast and abdomen.

The Chickadee differs from the Nuthatch in that it has more enormous tails, a black cap and collar beneath its chin, and light-colored sides. These little birds have shorter beaks than nuthatches, making them even adorable. It’s worth listening out for their signature “chick-dee-dee-dee” tune.

Aside from that, Carolina chickadees are pretty similar in appearance to their black-capped counterparts and are incredibly abundant across the southeastern United States. It is possible that the margin of their bib will seem neater.

Similarly, boreal chickadees are found in the far northern woodlands and are distinguished by their brown crown and plain brown sides.

Nuthatches mostly eat insects as their primary source of nutrition. As they bounce about the tree trunks, these birds explore the bark and cracks for hidden delights such as bugs, beetles, ants, and caterpillars that have been left behind. Nuthatches will also frequent backyard feeders, particularly if you have a large number of trees in your yard that they may utilize for foraging and protection from predators. Fill your feeders with the items that nuthatches prefer, and you’ll be well on your way to attracting the birds.

In contrast, Chickadees consume a diet of nuts, fruits, insects, worms, and occasionally tiny bits of carrion as part of their daily diet. Chickadees are also fond of suet and peanut butter, which may be found at bird feeders. Chickadees also have a proclivity for saving food and consuming it later; thus, they are unlikely to remain at a feeder for an extended period of time.

Nuthatches typically descend tree trunks headfirst and hang to bird feeders upside down. The red-breasted Nuthatch is the only nuthatches that migrate to hot climates in the winter, although other species do not. For example, white-breasted Nuthatches do not migrate; therefore, they can be seen all year.

Similarities between Nuthatch vs Chickadee

The Nuthatch and the Chickadee are both fascinating small birds to watch. They are friendly songbirds that may often be seen on the branches of backyard trees. They fly around hunting for insects/bugs to eat, and they also attend bird feeders regularly. Both these little birds build their nests in tree holes as well.

Both of these birds may be seen in large numbers across Oregon. Both have small, powerful bills and similar coloration bodies with typical black and white hues.

Nuthatches not only explore crevices for food but also conceal it. They will load seeds or insects into tree holes and cover them with lichens, grass, or bark. After that, these birds will return to this secret food to survive the winter.

Here are some more Nuthatches facts:

Here you can check all Nuthatch sounds

Other intriguing facts about Chickadees:

Here you can check all Chickadee sounds

Nuthatches have seven common species that may be identified based on their color and location. The most common Nuthatch is white-breasted nuthatches having black and white coloration with blueish-grey wings. Other species have their typical coloration (as discussed above)

The Chickadee has more enormous tails, a black cap and collar beneath its chin, and dark-colored sides. These little birds have shorter beaks than nuthatches, and they have white feathers with gray and white tips.

Chickadees have a more prominent tail and a smaller beak than nuthatches. They also don’t climb tree trunks like nuthatches, and finally, Nuthatches are more compact than Chickadees.