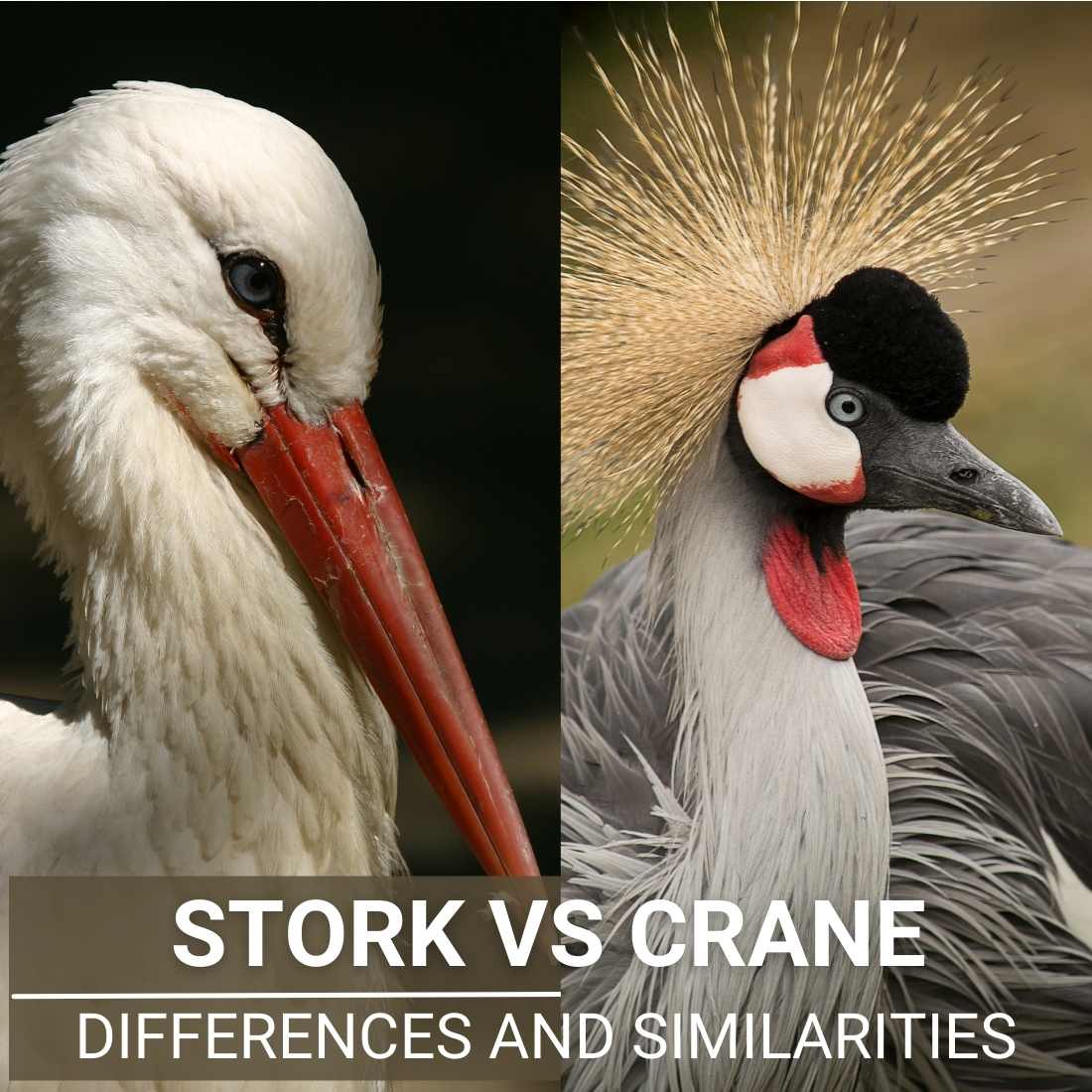 Cranes and storks are intriguing birds that belong to two distinct bird families. Both birds have a wide range of personality traits that distinguish them from one another. Despite the physical differences between them, they both have exceptional flying skills. However, even if some of the differences may be seen by even the most inexperienced eye, it is crucial to differentiate and explain them.

Similar to this, there are 19 recognized species of storks in the world, which are grouped into six genera, with the most noteworthy being the Painted, Black-necked, Woolly-necked, Openbills, adjutants, and Marabou storks. The majority of stork species are migratory birds, as is the case with most other birds but cranes show less migration behavior. Not all cranes migrate large distances, as some Storks do. Cranes Their foraging versatility has prevented them from putting their lives in danger when traveling great distances. The majority of cranes have a wingspread of 2.4 meters, but the Stork has the largest wing diameter, measuring more than 3.2 meters in length.

Cranes are unique in that they can adapt their diet to suit the availability of food, their energy, and nutritional requirements, as well as the local climate conditions. That is unquestionably a fantastic adaptation for their survival in any environment, but storks often do not alter their regular diet in any way. On the other hand, Storks are usually deafeningly quiet, while cranes have a robust vocal communication system with a large vocabulary. Cranes are regarded as the tallest flying bird, but storks are not the tallest of all.

Other noticeable differences between stork vs crane are given in this table:

Similarities between Stork and Cranes

The legs and necks of both the Stork and the Crane are pretty lengthy. In addition, both of these intriguing birds favor or prefer aquatic habitats to dry surroundings, which is a testament to their uniqueness.

Another similarity between Stork Vs Crane is that they both fly with their necks extended as they take flight. These are two magnificent wild birds that have the ability to fly at vast altitudes and for long periods of time. Because of their large and broad wings, which are also extremely powerful in nature, they have remarkable adaptations for long-distance flying, as evidenced by their large and broad wings.

The final similarity between these two birds is that both Crane and Stork are loyal birds, and they spend their whole life with the same partners.

Cranes are large birds with long legs and necks. They have a body form that is similar to that of herons and egrets (also see our post: egret symbolism), although they tend to be heavier (in another post we also compared the crane vs heron). A crane’s color is usually described as brown, gray, or white; however, African crowned cranes have a stunning gold crown of feathers on their heads.

The Crane’s mating dance is one of nature’s most magnificent displays. With their wings partly open, the birds move stiffly around each other with quick steps, jumping high in the air on alternating occasions. During this time, the cranes make a deep bow and lengthen their necks. Following that, the cranes pick up twigs or blades of grass and toss them into the air, stabbing them with their beaks as they come to a landing. The dances are attended by people of both sexes, both mature and immature.

Males and females call together when they point their beaks to the sky, and the male Crane raises part of his wing over his back to join the female Crane in their call. For almost 10 seconds, the two birds communicate back and forth. Scientists believe that these cries help to strengthen the relationship between a monogamous couple and serve to protect their area.

Other interesting facts to note are as follows:

They construct their nests to be used for a long period of time, suggesting that they are sedentary birds. Read also about the stork symbolism.

When stork chicks hatch, they are practically naked, but they quickly develop a protective layer of soft down feathers to protect them from the harsh environment in which they are raised. Being altricial and in need of parental care, both parents are kept occupied flying back and forth to provide meals to them regularly. Chicks can swallow up to 60% of their own body weight during a single feeding session.

Other interesting facts are as follows:

Here you can check all Storks sounds

Who will emerge victorious from the bird’s battle?

You can’t really tell which is better when it comes to their fight because they both are totally different and can’t fight each other. But Stork has the advantage of a larger beak and bulkier body. So they may give more harm to cranes if they fight.

In case you’re interested we also compared: Stork vs Pelican.