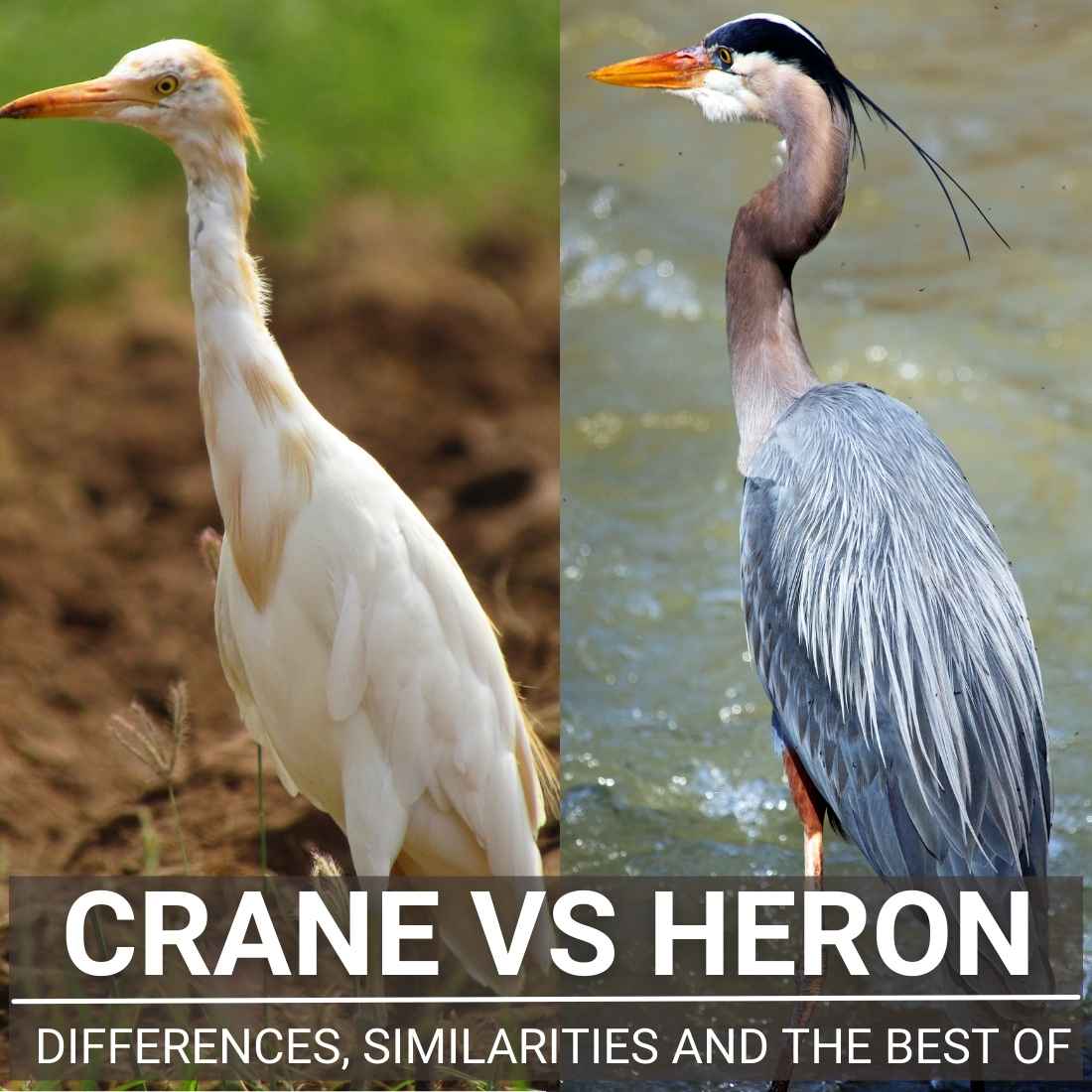 The human eye often fails to notice little differences that distinguish one bird from another. People who observe water birds on a daily basis are frequently puzzled as a result of this optical illusion created by human sight. The Heron and the Crane are two of the most easily mistaken birds due to their similar look, which makes it difficult to distinguish between them. It is the goal of this article to guide human eyes to pinpoint such minute distinctions and accurately identify the bird in front of them to become an experienced birdwatcher!

Differences between Crane Vs Heron

Cranes are members of the family Gruidae, with around 15 species worldwide but just two in North America. Cranes are a very endangered bird; just 220 magnificent cranes survive in the wild and almost the same number in captivity today. In the summer, they may be found in the marshes of Canada’s Wood Buffalo National Park or Wisconsin. In contrast, they can be found in Texas’ Aransas National Wildlife Refuge or Kissimmee Prairie in the winter.

The whooping Crane is the biggest bird in North America, at 52 inches tall and soaring up to 7 feet in the air. Additionally, the sandhill crane has a 7-foot wingspan. While herons often reach a height of 46 inches and have a wingspan of up to 6 feet.

The Cranes and Herons carry their heads in a very unique manner. Cranes’ heads, beaks, and necks are proportionately heavier than their bodies, which is why their necks must curve in an “S” shape while they fly. On the other hand, Herons have a light neck and fly with their necks extended. Another distinction that may be observed during their flight is that cranes have sharp wing motions and fly with their wings raised above their bodies. Herons have sluggish wing motions and often fly with their wings parallel to their body.

Another difference between the two bird species is that cranes are extremely friendly. They are most frequently spotted away from trees, in large open expanses, in groups. Herons prefer a lonely existence. They are frequently sighted alone when hunting or flying. Certain Herons will even attack other Herons if they are displeased with their presence. Herons can be seen perching on forests, marshes, riverbanks, sloughs, meadows, fields, and even backyard ponds. Their social behaviors are obviously quite dissimilar. Herons typically construct single nests, whereas cranes nest in flocks of several hundred of their species.

Herons and Cranes are also distinguished by their coloration. Cranes are predominantly white in color with a black face, black legs, and a darker, slimmer beak than Herons. Herons come in an array of colors. Both Cranes and Herons similarly consume fish, but Cranes dig for food using their beak. On the other hand, herons follow their wetland prey and use tools to lure them in.

Cranes are unique in that they do a dance that no other species performs. Cranes seem significantly different from Herons as they walk slowly in a rolling stroll with their neck stretched straight out.

Similarities between Crane Vs Heron

Cranes and Herons both are water birds, and the majority of these birds have whitish-greyish color bodies. They both are large, with long legs & long necks (also check our list of birds with long necks). Another similarity is that both Crane and Heron can fly up to larger distances.

Cranes are huge birds distinguished by their long legs and necks. They have a similar body shape to herons; however, they are slightly larger. The color of a crane is typically characterized as brown, gray, or white; nevertheless, African crowned cranes have an enviable gold crest of feathers on their heads.

The mating dance of the Crane is one of nature’s most spectacular sights. With their wings partially extended, the birds take fast strides around one another, occasionally leaping high into the air. Cranes make a deep bow and stretch their necks during this time.

When males and females aim their beaks to the sky, the male Crane extends a portion of his wing over his back to join the female Crane in their call. The two birds talk back and forth for about ten seconds. According to experts, these screams help to strengthen the bond between a monogamous pair and guard their territory.

Heron’s most often used hunting tactic is to remain still on edge or stand in shallow water and wait for prey to approach. Then, they immediately straighten their S-shaped neck toward the prey. Fish and other prey will be pierced and consumed whole by the sharp bill. Herons have excellent vision and can hunt both day and night.

Herons are superb flyers, capable of reaching speeds of up to 48 kilometers (30 miles) per hour. Their necks are coiled in an S form during flying, and their legs dangle behind the body.

Here you can check all Heron sounds

We can say that both Crane and Heron are beautiful sea birds and can not be kept as pets. Cranes are usually monogamous (spent the whole life with one mate) and omnivores, while Herons are polygamous (change mate throughout the life) and carnivores. Additionally, these birds can fly long distances and have a huge lifespan.