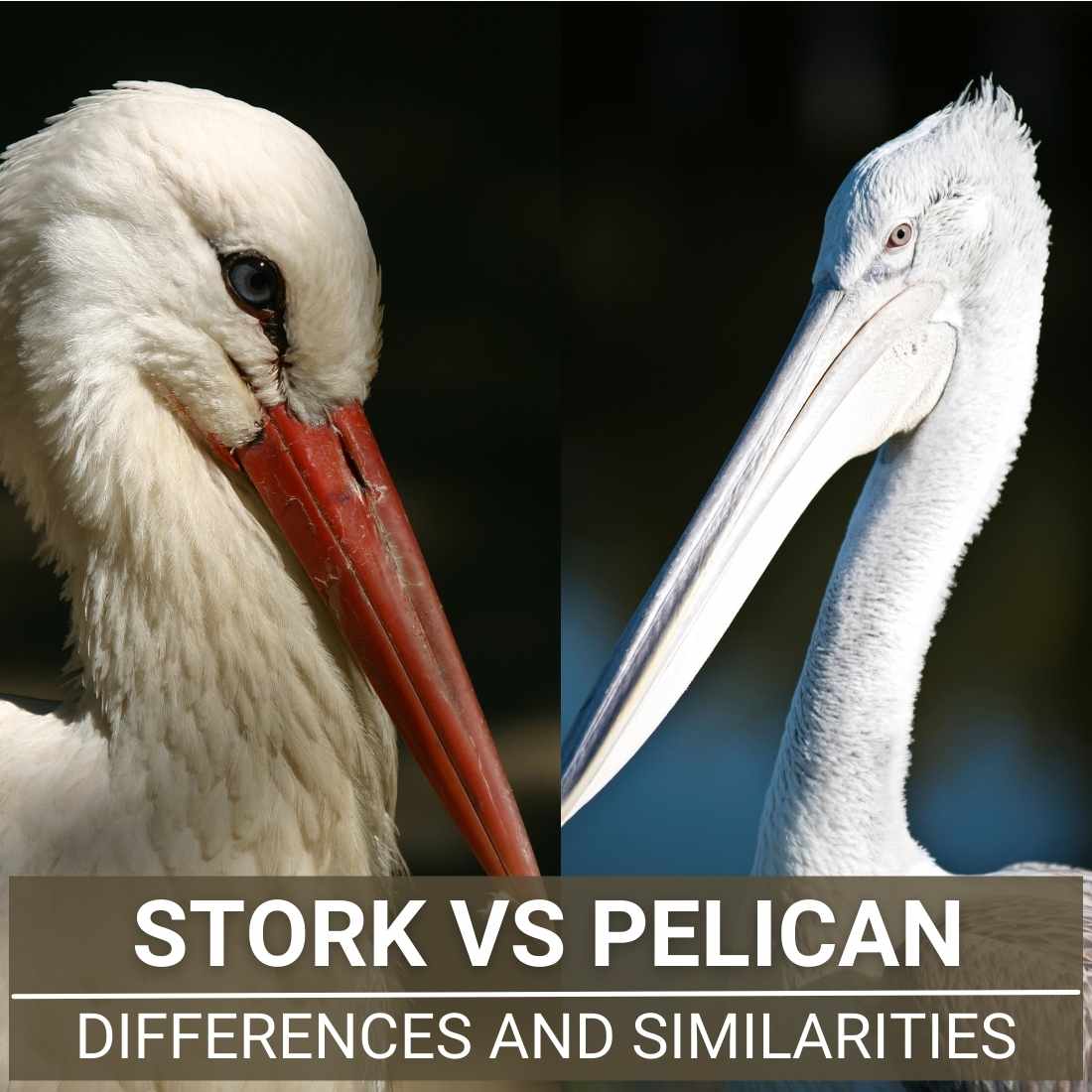 Pelicans and Storks are fascinating birds belonging to two separate groups of birds. Both birds have a wide variety of differences in their characters. Nonetheless, both pelicans and storks have huge bodies, yet they both have outstanding flying capabilities. Even though some of the distinctions are visible to even the most untrained eye, it is crucial to recognize and explain them. The purpose of this article/post is to explore all the intriguing differences and similarities between pelicans & storks, along with their interesting facts.

Differences between stork and pelican

Storks belong to the order Ciconiiformes and have long necks and long legs, whereas pelicans are birds with massive bodies and belong to the order Pelecaniformes. Almost eight species of wild pelicans are still present today, and they are all members of the genus Pelecanus. In fact, fossil evidence indicates that Pelecanus included more than ten species, indicating that it was a very diverse genus.

Similarly, there are 19 known species of storks globally, classified into 6 genera, with the most notable being the Painted, Black-necked, Woolly-necked, Openbills, adjutants, and Marabou. The majority of stork species are migratory birds, as is the case with most other birds. Most pelicans have a wingspread of 1.8 meters, but Dalmatian pelicans may reach up to three meters in length, while the Marabou has the longest wing diameter, which is over 3.2 meters in length.

Other noticeable differences between Pelicans & Storks are given in this table:

Similarities between stork and pelican

Pelicans and storks are two beautiful wild birds that can fly at great heights and for extended periods of time. They have exceptional adaptations for long-distance flight, as seen by their huge and broad wings, which are also quite strong in nature.

They are a large-bodied bird species that are on the verge of extinction. Both of them are mute/silent, and people have created intriguing mythology about them throughout the years, despite the fact that such legends are attributions to their way of living. Both pelicans and storks have a long neck (we also have a list of long neck birds) and a long beak, which is characteristic of their species. White with black patterns is the standard coloring for each of them.

The majority of pelicans do not dive bomb their prey; instead, they scoop it up while treading along the surface of the water. To boost their chances of success, the birds occasionally organize hunting parties, assembling in a U-shape and pounding their wings on the water to corral fish into a compact cluster—or force them into the shallows—to increase their chances of catching more fish.

Other noteworthy facts are as follows:

Here you can check all Pelican sounds

Among the noteworthy characteristics of these birds is the lack of syrinx muscles along with a vocal gland (that is poorly developed), which has resulted in their silent behavior or muteness. They can, however, generate noises by snapping their powerful bills together. Storks create massive nests. The diameter of some nests has been measured to be more than two meters (six feet) in diameter and around three meters (ten feet) in depth.

They build their nests for long-term use, demonstrating that they are sedentary birds.

When stork chicks hatch, they are nearly naked, but they rapidly grow a coat of soft down feathers to shield them from the harsh environment. Being altricial and in need of parental care, both parents are kept occupied flying back and forth to provide meals to them on a regular basis. Chicks may consume up to 60 percent of their own body weight in a single feeding session.

Read also about the stork symbolism.

Other facts to consider are as follows:

Here you can check all Storks sounds

In another post, we also compared the stork to the crane: Stork vs Crane.