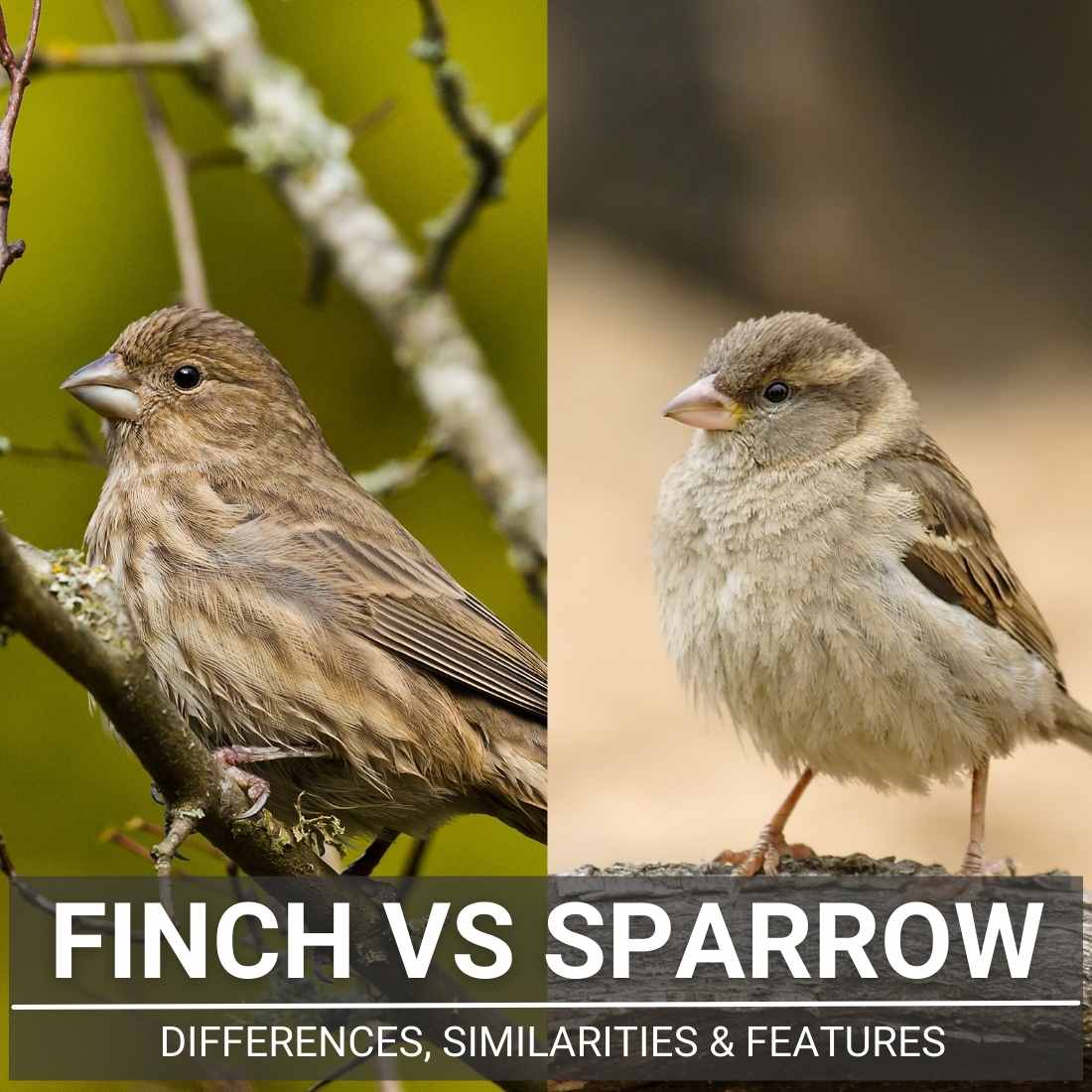 Finches and Sparrows are some of the most charming birds that congregate in towns, farms, and parks. Because of their distinct songs and friendly attitude, they are the primary focus of interest for every human being especially, bird enthusiasts.

Here is a breakdown of all the distinctions between the (House) Finch vs (House) Sparrow.

Differences between Finch vs Sparrow

The finches have a nearly worldwide distribution, with populations occurring in America, Europe, Africa, and certain island groups, such as Hawaii, where they are known as “Hawaiian finches.”

These birds may be found in various environments, from rain forests to dry deserts. Some species can even be found on the outskirts of Arctic regions, although they do not reach the most northern reaches of the continent.

On the other hand, sparrows are native to much of Europe, the Eastern Mediterranean, and a significant portion of Asia. Sparrows are also the most extensively dispersed wild bird on the planet.

Sparrows may be found in a wide variety of diverse environments. Forests, pastures, grasslands, desert borders, woods, and other natural habitats are some of the places where they may be found in their native environment. A large number of their population lives in urban areas.

They may be found in cities, playgrounds, townships, lawns, farms, gardens, and a variety of other man-made environments, as well as in the wild. Their adaptability is the fundamental reason they have been such a successful invading species in the first place.

Finches have huge beaks and flattened heads, and they have a wingspan of around 2.8-3.2 inches and a length of about 5.6 inches. Males have brightly colored plumage to attract mates, while females are brownish or grayish in color. Light red or orange markings appear on their bodies, heads, and upper back, as well as on their wings.
While sparrows have gray heads, white cheeks, a blackish bib, and a rufous neck, females are a simple buffy-brown overall, with dingy gray-brown underparts and a dingy gray-brown underside. Beige, dark, and brown stripes are prominently seen on their backs.

In terms of body size, finches are tiny, sleek birds that range in length from 3.5 to 10 inches. While most sparrow subspecies are tiny, their length typically ranges from 4.5 to 8 inches.

Finches are seed eaters who consume a wide range of plant seeds, particularly grasses, in their diet. Seasonal variations in seed availability, insect abundance, and the availability of certain crops, berries, and other plants will all influence the majority of a finch’s diet at different times of the year.

Sparrows consume grains and seeds, as well as food scraps from our tables and insects. The majority of commercial birdfeed combinations are also acceptable to them.

During the day, finches are pretty busy. They are not territorial in any way. In fact, they are frequently found in small groups or flocks, and they nest in close proximity to one another. Females are often more dominating than males in social groupings.

Finches are one of the few small birds that show noticeable differences in color and pattern between the sexes, and they are the most common. Males have a more vivid coloration than females; however, they can appear much more identical to females during the non-mating season.

On the other hand, sparrows are diurnal, with most of their activity occurring during the day. It is common for them to spend their days hopping about the ground, searching for food, or darting between branches. When they are not breeding, they are very social birds who feed in small groups known as flocks.

These sparrows guard a limited area surrounding their nests in groups of two or three. In their immediate surroundings, they are unexpectedly violent and may fight other species who get too close to their nests or territorial boundaries.

Similarities between Finch vs Sparrow

When it comes to domestic birds, the Finch and the Sparrow are the most common and easily recognized of all. Both birds eat mostly tiny grains and seeds, which make up most of their diet. Both of these birds are small in stature and have comparable feeding habits. The chirping of these two birds, in addition to their other characteristics, is particularly pleasant. Finally, both Finches and Sparrows are social birds who prefer to live in flocks.

Finches are passerine bird species that are members of the Fringillidae family, which is the biggest bird family in the world. Their robust and conical beak, which are used to split open the seeds, distinguish them from the rest of the species. Here are a few more exciting Finches facts:

Here you can check Finch sounds

Despite the fact that sparrows are not water birds, it has been observed that they are capable of swimming underwater to travel from one location to another. So they live in diverse environments.

Here you can check Sparrow sounds

Finches have huge beaks and flattened heads. Their males have brightly colored plumage, while females are brownish or grayish in color.

Differentiating between common/same-sized birds that dwell in a flock is difficult. But, with the right identification points, you can separate Finches and Sparrows from each other.

Other than that, one important thing to keep in mind is that both birds species are present almost anywhere in the world with only one exception, i.e., Finches do not present in the Arctic areas.

We hope that our article Finch vs Sparrow helps you identify these beautiful birds.