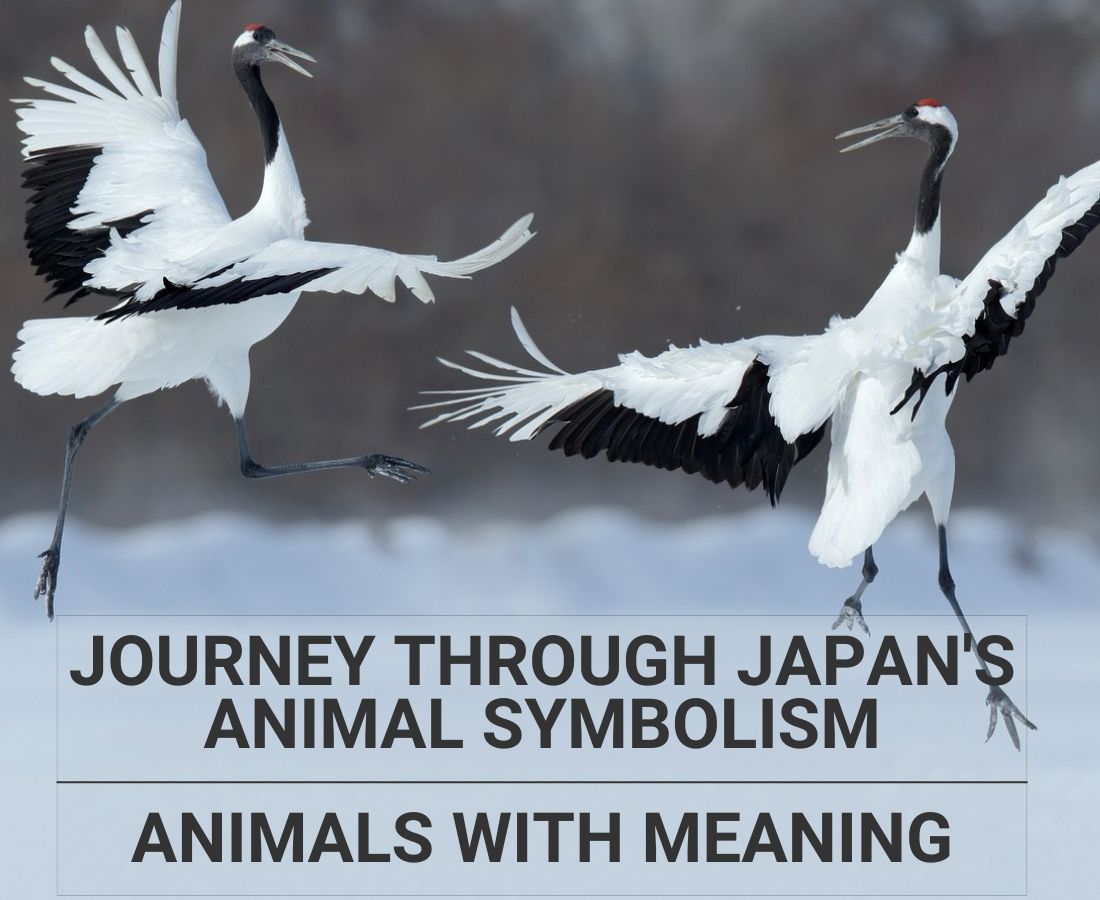 Japan is known for having one of the world’s richest and most innovative cultures. Its many ancient beliefs and traditions are still intact today. While most of us think of sumo wrestlers and sushi when people talk about the country and its culture, we sometimes forget that animal symbolism has always been prevalent in the land of the rising sun.

Since a visit to the country automatically transports you to an exciting place where symbolic animals adorn homes, shops, and business establishments, let’s find out the essential symbolic animals in Japan.

“井の中の蛙、大海を知らず – I no naka no kawazu, taikai wo sirazu”
[Translation: A frog in a well never knows the vast ocean]

Commonly referred to as the “bird of happiness,” the Japanese view cranes as a national treasure. Their majestic stance symbolizes nobility and strength. Cranes, admired for staying loyal to a single mate for life, are seen as a powerful image of devotion and faithfulness.

As a tradition, folding paper cranes indicates hope and healing during life’s most challenging times. Many also believed it would bring prosperity and happiness to newlyweds. The story of Sadako Sasaki, a young girl diagnosed with leukemia, illustrates the significance of folding paper cranes.

To help cope with her illness, Sadako aimed to fold 1,000 paper cranes before she perished as a symbol of hope. Sadly, she didn’t get well despite completing her goal. The Japanese decided to carry on with the tradition as they fold a thousand cranes to signify solidarity for those who needed happiness, peace, and hope. Read more about the spiritual significance of the cranes.

Although crows have recently been considered a menace in modern-day Japan, they were once viewed as sacred messengers who carried the souls of the dead to the heavens. While their fondness for carrion has given them a particularly dark omen, the Japanese once believed that the appearance of a mythical three-legged crow was a sign of divine intervention.

Also, since they were commonly seen feasting on the bodies of the fallen after a battle, the arrival of a crow indicated rebirth and rejuvenation.

Whether it’s Doraemon the blue robot feline from the future or the cuddly kimono-wearing Hello Kitty, it’s easy to understand that the Japanese are fond of their cats. These agile creatures, believed to possess protective powers and the ability to attract good fortune, have long been revered in Japanese folklore and tradition.

According to legends, a feudal lord wandered into a small Gotoku-ji temple where a monk lived with his pet cat. During one of his hunts, a huge storm took place, prompting him to take shelter under a tree outside the temple. While taking cover from the rain, he noticed the cat appearing to wave to him with one paw to come inside the temple.

As he ran towards the feline, lightning struck the tree where he had just been standing. Since then, cats have been revered and regarded as symbols of good fortune in Japan.

Recognized as a wild animal related to domestic dogs, wolves, and foxes, the Tanuki is a notorious trickster in many Japanese myths and legends. Sporting a seemingly masked face, relatively thick fur, and inquisitive nature, they represent a Japanese prankster god that displays shape-shifting and supernatural powers.

The Tanuki is featured in folklore, myths, songs, and even video games and is known to use its large testicles for mischief. Kneading and massaging them into their desired shape, they would trick businesses by using scraps of paper or leaves as money in exchange for goods. However, several traditions also see them as harbingers of wealth and good fortune. Read about the raccoon’s spiritual meaning here.

Since the Japanese have spent centuries living with red foxes, it’s easy to see how they have developed various myths about these crafty and far-ranging animals. Much like the Tanuki, these creatures use their gifts to outsmart bigger predators in stealing a few remnants of their prey.

Commonly seen in Japanese mythology, the red fox’s connection to Inari Okami, the goddess of fertility and agriculture, tells us that it is undoubtedly supernatural. While most people see them in a malevolent light, these mysterious yet helpful spirit guides prove that they also have a benevolent side.

Often seen serving as front-desk guardians to countless shrines across Japan, the komainu are mythical lions that are perceived to be the protector and messengers to the gods of the temple where they are found (often called lion-dogs in English).

While not every religious site displays a komainu at its entrance, those that do call upon this powerful creature’s ability to ward off evil spirits from sacred shrines, businesses, and private households.

Although they were introduced in Japan only in the 1920s, the koi fish has fast become a symbol of perseverance, prosperity, and good fortune. The koi carp’s ability to adapt to different water and weather conditions inspires the Japanese to be more flexible and adjust to life’s difficult situations.

Legend tells about a koi’s attempt to swim upstream against the vital flow of water. After overcoming a handful of challenges, the koi reached the top of the waterfall and turned into a powerful dragon. This story taught the Japanese to face their hardships confidently and to constantly challenge themselves, for it often leads to great success.

Kirin is a mythological creature that enjoys the admiration and reverence of the people of Japan. A kirin has a body as strapping as a stag, skin coated with scales, and a head with antlers. The image of this highly revered animal signifies strength, serenity, and courage.

Favored by many for its gentle nature, the kirin appears only during times of peace, proving why they are considered agents of positive virtues and kindness. However, they are also quick in mounting a counter-attack when threatened, breathing fire from their mouths as needed.