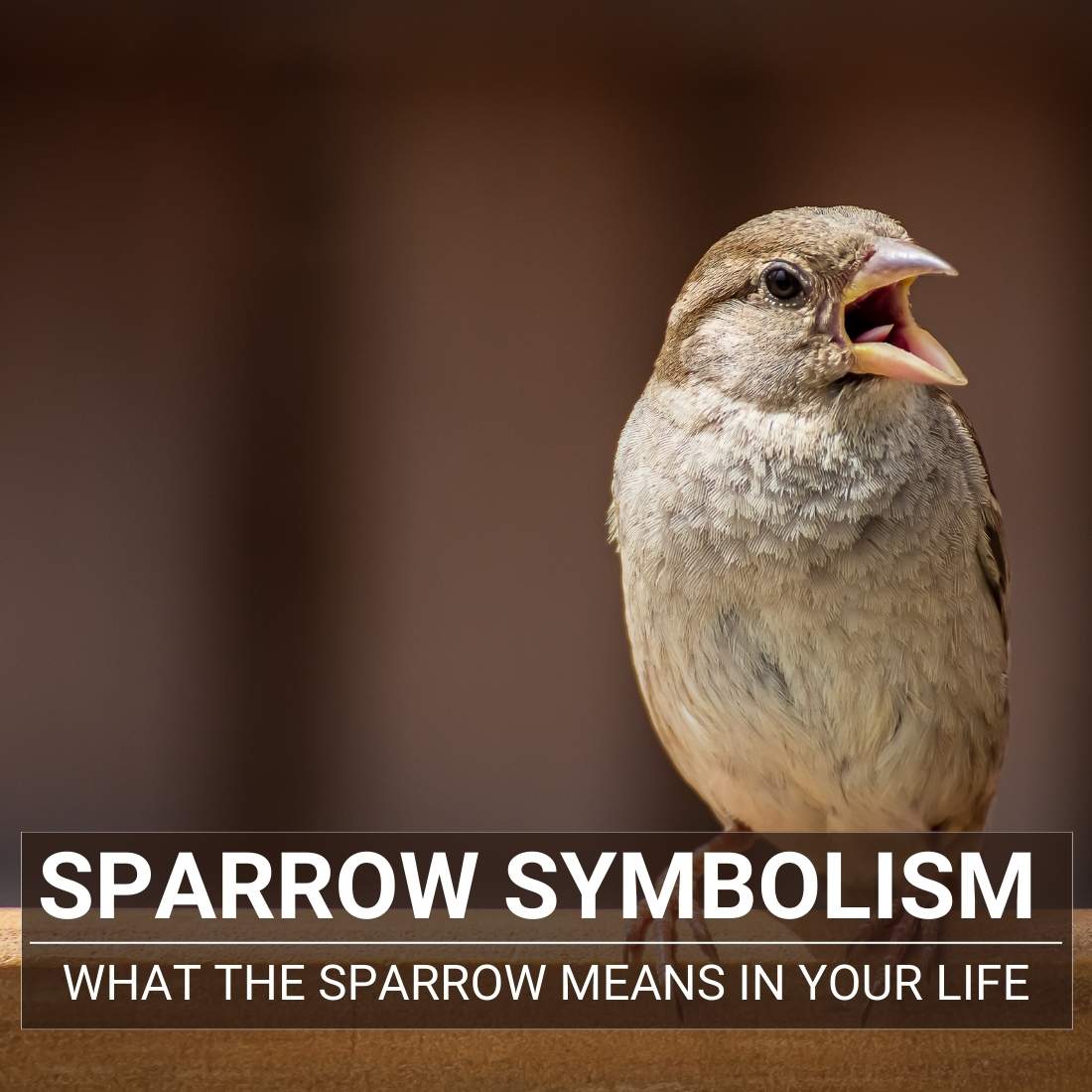 The sparrow is a tiny, chirping bird that can be found soaring all over the world. In the United States alone, there are over 50 species of sparrow, but they all share some common traits: the small size, brownish-gray sparrow feathers with white stripes on their wings and back, and a short, stubby bill.

The sparrow is a reminder to enjoy the little things in life and happily embrace simplicity. In this article, you’ll explore how the sparrow appears throughout human culture and dive into its spiritual meaning and symbolism.

In this world of ours, the sparrow must live like a hawk if he is to fly at all.

Sparrows are impactful little creatures whose presence may hold spiritual meaning for our everyday lives, such as the need for community, secrecy, empowerment, and determination.

Sparrows may have a small stature, but their song can be heard from far away. Symbolically, a sparrow reminds you that your power comes from within, and you have the ability to move mountains and overcome any difficulties in life that you face.

Sparrows are often found in pairs in the warmer months. During winter, they come together to bear the extremely cold months. These beautiful birds symbolize the need to help others and the benefits that you receive by doing so.

Baby sparrows begin to fly at just two weeks old! From there, they’re left to their own devices to explore the unknown world. These infant birds teach remind you to take risks towards achieving your goals even if you don’t feel ready.

The sparrow symbolism could also hold meaning in response to our work ethic. Sparrows are hard-working, diligent birds that can inspire us to be productive. They symbolize the need to be determined and invest time and energy in your desires in order to find success.

Sparrows are social birds that tend to flock in groups, and groups tend to share information with each other. If you find a sparrow on your windowsill, it may symbolize secrets or information being revealed.

A sparrow sing’s its song all throughout the day. They represent self-expression and the beauty that comes from embracing authenticity and individuality. If you find a sparrow flying overhead, it may be a reminder to be creative when expressing yourself to the outer world.

The sparrow can be found on almost every continent. It’s no wonder this flighty bird has appeared in European, American, Asian, and Chinese cultures.

In European folklore, sparrows find themselves in the midst of a superstition. Many Europeans believed the sparrow symbolism says that it was bad for you to fly into your home, especially if it died.

A dead sparrow was believed to symbolize the impending death of a relative or loved one. If the bird survived the crash, many also believed they must kill the sparrow to save their relative’s life or even their own.

‘His Eye in the Sparrow‘ is a gospel hymn once sung throughout African American churches across the United States. The song was written in 1904 by Civilla Martin, who wrote a song about her friend who was deathly ill.

Cilvia based the song on a bible verse that contained a spiritual connection to the sparrow. Whitney Houston covered the sound before she tragically passed away, and the song was released a few months later.

In the mid-1900s, there was a project originating in China called the “Four Pests” campaign. Chinese people set out to eradicate sparrows, rats, flies, and mosquitoes. The sparrow is one of the most common birds in China and is often considered a pest due to its high population rate.

They hung over 80,000 scarecrows in hopes of attracting these birds. Many sparrows were killed during this movement until Chinese scientists examined the digestive tracts of some of the sparrows.

They discovered that the majority of their food consisted of harmful insects, proving that the birds were beneficial to human beings. After that, China began importing sparrows from Russia into the country to supplement the population they had exterminated.

The traditional Japanese fable, ‘Tongue-Cut Sparrow,’ is the story of a man, his wife, and an injured sparrow. The old man takes care of the injured sparrow, leaving him home one afternoon with his wife while he goes out for the day.

The wife neglected the bird and refused to feed it, so the bird eventually ate some starch that was left out, angering the woman. She let the bird go out of anger.

The old man found the bird in the mountains to make sure he was okay. Because of his generosity, the sparrows of the mountains gave him a basket full of treasure.

Later, he returned to the mountains out of greed, hoping that the birds would also give her treasure. Because of her malice, they gave her poisonous snakes and monsters, which eventually led to her death. The moral of this fable was that greed and jealousy would poison the soul.

In a Hindu legend, Garuda and the Sparrow, there was a magnificent sparrow who laid her eggs by the ocean. Her eggs were swept away by the ocean’s tides and vanished into the sea.

The sparrow pleaded with Lord Varuna, God of the ocean, to release her eggs back to her. Her eggs did not return to her.

In the legend, Lord Garuda, a divine bird god, heard the sparrow’s cry and demanded that the ocean return her eggs. Thankfully, the ocean listened and gave the sparrow back her babies.

Also, check out our comparisons: Finch vs. Sparrow and Sparrow Vs. Swallow.

The Bible mentions sparrows in a few different contexts, and each of these has symbolic meanings. Jeremiah mentions them as one of the many reminders that God provides for his people: “I will give you sparrows to eat instead of your fathers.” (Jeremiah 14) In this verse from the Bible, when faced with an oppressive famine, it is clear how having access to food made life livable again.

Sparrows and some birds during biblical times were thought of as having the protection of God as they would build their nests and homes on and near sacred land and artifacts.

The protection of these birds extended so far that some were even put to death for disturbing a nest. These birds were also used in the eastern world as food and still are to this day.

Because of this, sparrows were compared as the lowest form of currency and therefore used to explain the value of the human in relation to the sparrow. To those who follow Christianity, the sparrow is a reminder that God will remember all of his creations, even the ones that are sold for one cent.

With this in mind, it begs the question: what does this mean for God’s attentiveness to us? If he remembers the small happenings of a finch-like bird, how much is God concerned with everything humans do? (See more about the biblical meaning of seeing a blue jay or the Red Cardinal biblical meaning).

The sparrow spirit animal acts as a guide for spreading your wings and flying to new heights. If you’re going through a challenging period and unsure of how to overcome it, the sparrow may appear to remind you to change your perspective and try looking at the situation from a higher perspective.

A sparrow is one of the most interesting bird tomes there is. If these common birds are your animal totem, you’re likely a very free-spirited person (symbols for free-spirited persons here). Many people see you as innocent and have a strong focus on your family life. But, deep down, you desire to see all there is to see in the world! You enjoy traveling and may have had to grow up quickly at a young age.

Power Animals are helpful spirit animals that can help you through various difficulties in life. Call upon the sparrow for a sense of direction, as birds are natural navigators and create at navigating life cycles. The sparrow power animal can also help you awaken to your inner power, allowing you to utilize your talents and abilities to achieve your desires.

If there were no sparrows among us God would not know what goodness was.

Also, check out our post about the dead sparrow’s symbolism.

Check out this video to learn more about sparrow symbolism.

What does it mean to dream of sparrows?

The spiritual perspective of dreaming of sparrows varies depending on the type of dream this innocent bird appears in.

A house sparrow lives a very fertile and healthy life. They have anywhere between 2 – 4 broods of baby birds per year. A female sparrow may symbolize a healthy and successful pregnancy in a dream.

Sparrows follow an up-and-down pattern of flight. Seeing this passerine bird flying in your dream may indicate that you will experience ups and downs in your life soon. The sparrow is a skilled bird with the ability to transcend these challenges, indicating that you will overcome them gracefully.

What does it mean spiritually when a sparrow flies into your house?

Sparrows can also be symbols of new beginnings, hope, and love. If you are experiencing a difficult time in your life, seeing a sparrow may be a sign that better days are coming.

In Indonesia, some people believe that a sparrow entering your home will bring good luck. In China, on the other hand, it’s an omen for marriage or childbirth!

No matter what the sparrow means to you, this cheerful little bird is sure to bring some happiness into your life. So if you see one fluttering around, take a moment to appreciate its beauty and let it fill you with hope for the future.

Sparrows are one of the few birds that don’t mind sharing their nests in the company of people. It’s no wonder this bird holds an abundance of meaning that can positively impact our lives. The symbolism of sparrows is inspiring, motivating, and foreshadowing, as these tiny birds teach us of life’s uncertainty, and the importance of community, and are a reminder of our inner power.

Sparrows are often seen as lucky symbols, and their sudden appearance in your life can be a sign that good things are coming your way. If you see a sparrow flying around your home, it may be an omen of good news or a sign that better days are on the horizon. Sparrows can also be symbols of love, hope, and new beginnings.

Do sparrows carry the souls of the dead?

In some cultures its being said that sparrows carry the souls of the dead; this is a superstition coming from Yorkshire, England where they believe that if a sparrow dies in a barnyard, then the soul of the deceased has been trapped inside of it. This belief was brought over by the Romans during the time of Christ.

What deity is associated with sparrows?

What is the sparrow chirping meaning?

House Sparrows are not very vocal birds, but their simple song of one or more cheap notes can be heard all across town. Sparrows are known to chirp when they are excited or happy, and some people believe that Sparrow’s song is a sign of good luck.