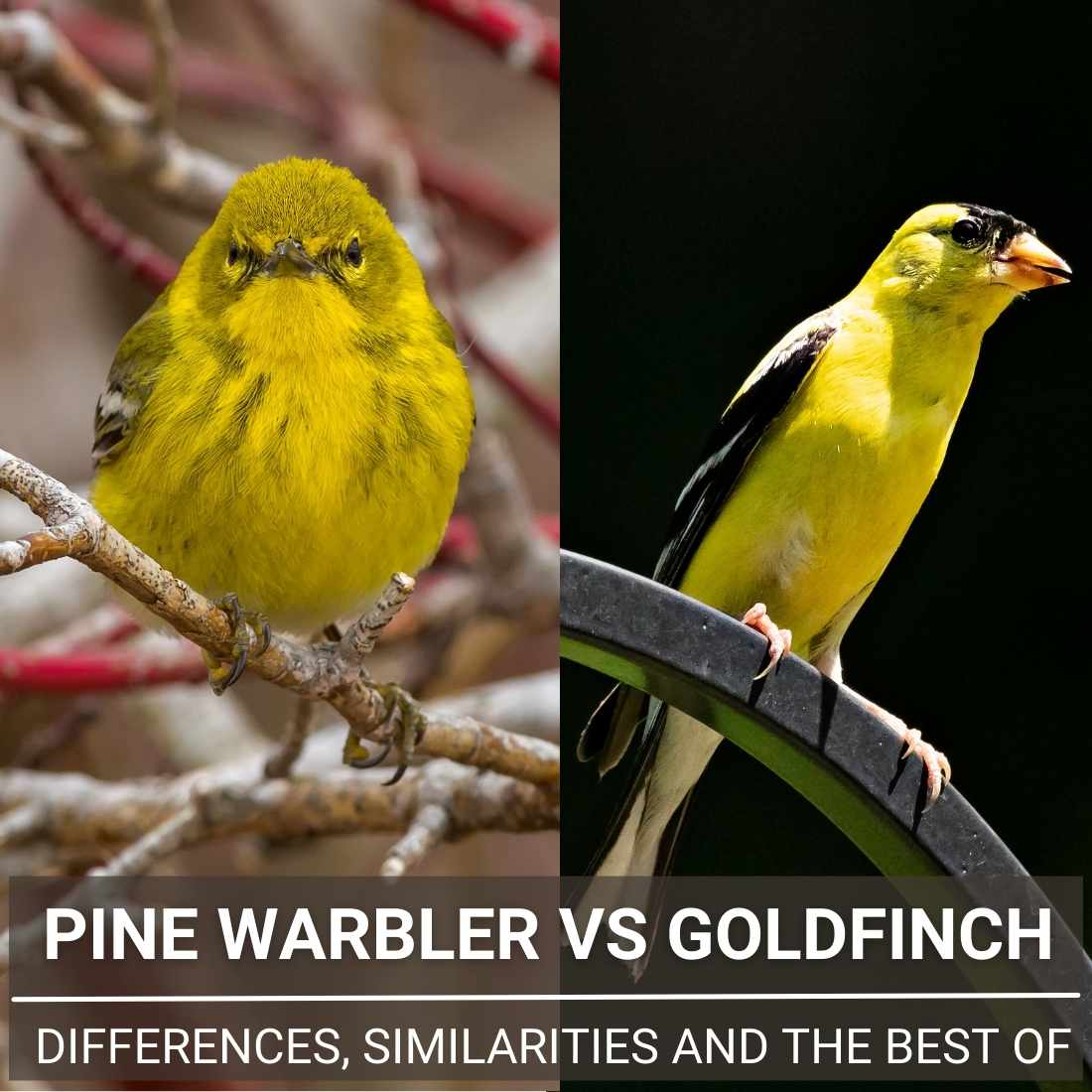 The human eye frequently misses minute distinctions that differentiate one bird from another. Daily observers of flying birds are usually baffled by this optical illusion caused by the human eye. The Pine Warbler and the Goldfinch are two of the most commonly mistaken birds due to their similar appearance. The purpose of this post/article is to instruct human eyes on how to detect such minute distinctions and precisely identify the bird in front of them in order to develop into an expert birdwatcher!

Differences between Pine Warbler vs Goldfinch

Pine Warblers are bulky, long-tailed warblers with strong bills that can be found in pine forests. A central notch is frequently visible at the tip of the tail, while Goldfinch is little finches with a short, conical beak and a small head, long wings, and a short, notched tail; they are also known as “golden finches.”

Even though both species have two noticeable white wing bars, which are the tips of the lesser and secondary covert feathers, the majority of the white on a goldfinch’s wing is actually on the tips and front edges of the primary feathers (the long flight feathers). Interestingly, the smaller coverts of mature male goldfinches are brilliant yellow in color and provide a golden “shoulder” impression. The Goldfinch’s rump and belly are predominantly white throughout the winter months.

Pine Warblers are generally difficult to spot since they prefer to hang out in the upper reaches of pine trees. The majority of their food consists of insects, although they also consume fruits and seeds. They will graze on the ground or visit the feeders in between feedings. Males sing from the tops of pine trees in steady, rich trills. On the other hand, Goldfinches are energetic and acrobatic tiny finches that cling to weeds and seed stockings and who occasionally mill about in big groups at feeders. Goldfinches fly in a bouncing, undulating pattern, and they frequently call while in flight, attracting the attention of observers.

Pine Warblers get their name from the fact that they spend most of their time on pine trees. This can flourish in pine forests or deciduous woodlands with a mix of pine trees, depending on the environment. They can be found in similar environments during the winter, but they usually visit backyards and bird feeders, where they consume seeds and suet. However, the Goldfinch’s primary natural habitats are weedy fields and floodplains, where large numbers of vegetation such as thistles and asters may be found. These beautiful birds can also be found in agricultural regions, along with roadside ditches, orchards, and people’s yards. Goldfinches can be seen at feeders at any time of year, although they are most abundant during the winter months.

Some other notable differences in Pine Warbler vs Goldfinch

Similarities between Pine Warbler vs Goldfinch

With its basic yellowish tinge, black wings, and white wing bars, the Pine Warbler’s winter plumage appeared to be similar to that of a Goldfinch.

In addition, both the Pine Warbler and the Goldfinch are songbirds, and they also have white spots on their tail wings. They both have wonderful voices and catchy music. Both bird species are extremely tiny, and people adore them.

The Pine Warbler is the only warbler that consumes a high volume of seeds, especially pine seeds. Due to this seed-eating skill, Pine Warblers occasionally visit bird feeders, unlike almost all other warblers. In winter, migrant Pine Warblers from the northern US areas migrate to the southern United States to join resident Pine Warblers.

Here you can check all Pine Warbler sounds

Interesting facts about the Goldfinch

Goldfinches migrate south in the winter, following a pattern that appears to correspond to places with an average minimum January temperature of fewer than 0 degrees Fahrenheit. American Goldfinches are unique among goldfinches in that they molt their body feathers twice a year, in late winter and late summer. Each spring, the male goldfinches’ brighter golden coloration is a welcome sign of the upcoming warm months. American Goldfinches breed later than the majority of birds in North America.

Here you can check all Goldfinch sounds

In case you are into birds with yellow plumage, check out our post: list of yellow birds or further posts about finches: Finch vs Sparrow, Finch Symbolism and Spiritual Meaning, Goldfinch Meaning.