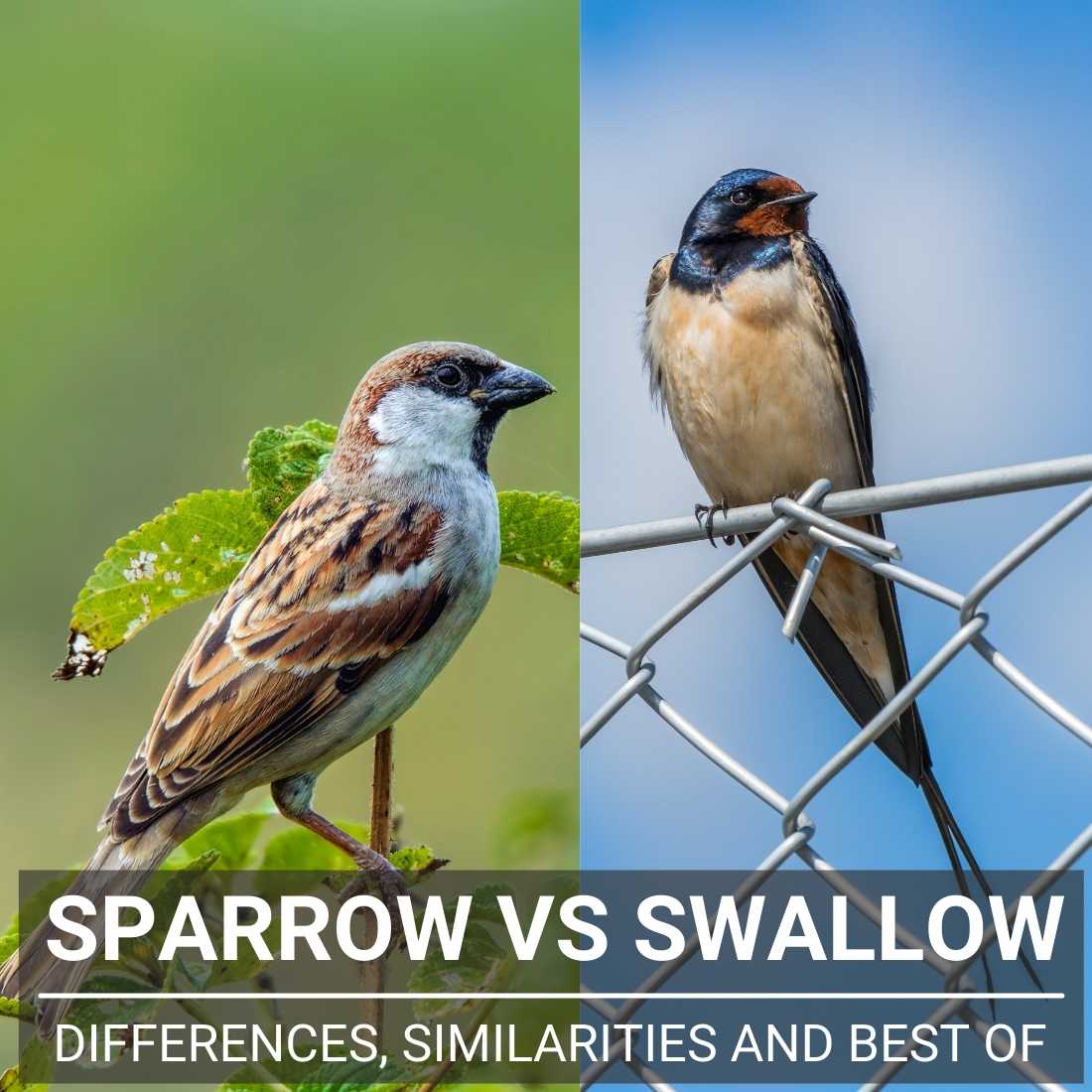 Many bird species resemble each other so much that you can’t differentiate them at first sight. Sparrow and Swallow are prominent examples of these kinds of birds.

Usually, the Sparrow is a small bird with a square tail with no white color. On the other hand, the Swallow is a little larger than Sparrow and has a forked tail that usually has any white coloration.

But how can you completely differentiate these two bird species? Let us discuss that in detail.

Even though these birds have a lot of color in common, they have several unique characteristics that define them apart.

Both species can be found on every continent on the planet, with the exception of Antarctica.  These distinctions between them may appear to be minor at first look, but they really lead to some quite fascinating distinctions underneath.

Here’s a short breakdown of all the differences between the Sparrows vs Swallows.

Differences between Sparrow vs Swallow

Small birds such as the Sparrow (Passer spp.) and Swallow (Hirundo rustica) cause much confusion among birders. The best way to distinguish these two species is by looking at their tails. The Sparrow has a square tail and no white in it. The Swallow has a forked tail and always shows white at the tip of its tail.

The upper parts of sparrows are streaked with brown, grey, black, and buff. The underparts are whitish with streaks on the breast. The face is light brown with a dark stripe through the eye. The Swallow is blue-black above and whites below. The face is pure white. Young swallows vary in appearance but generally resemble their parents except that they are browner on the back with hints of grey or buff; there may be white patches in the wings. The Sparrow has a brown-greyish bill with the upper part darker than the lower one, while the Swallow has an orange-brown or olive-yellowish bill with the tip of the lower mandible black.

Another difference between these two birds in their appearance is the color of their legs, i.e., the Sparrow has a brownish-grey leg with long, slender toes and a sharp claw, while the Swallow has grey or pink legs that are very short and stout for catching insects on the wing.

This means that Sparrows prefer heavily grazed areas with short grass, which enables them to spot their prey easily. As Sparrows are ground feeders, they do not need to be in a specific territory and can move around easily.

Swallows, however, prefer to sit on high vantage points where the aerial insects are flying around. So, due to that, Swallows will often stay in one area of their territory for longer than Sparrows because there is more prey. Because Swallows require a high vantage point to hunt, they usually sit on chimneys, roofs and telephone lines.

Similarities between Sparrow vs Swallow

The Sparrow and Swallow are nearly the same sizes, with similar features. Both birds eat insects and worms and can be found in backyards across North America. They also share many behaviors, such as nesting habits and flying styles. Along with that, both Sparrows and Swallows have similar diets during their non-breeding season. However, during the breeding season, they both tend to stick to what they are best at because different insects are available during different seasons, so it makes sense for them to switch their diet when appropriate.

The most popular sparrows are American Tree Sparrows (Spizella arborea), which are medium-sized sparrows with short wings, tails, and legs. They also have a pink beak with dark spots on their heads, while others have yellow or all-over brownish coloring.

Here you can check all Sparrow sounds

The swallow bird is a small, migratory bird that is known as the “bird of passage” because it flies from summer to winter habitats. The only real predators that swallows have to be concerned with are the house sparrow and the feral pigeon, who compete with them for nesting spots, echolocation hunting bats during dusk or nighttime hours, shrikes that live in geologic cracks along cliffsides.

Here you can check all Swallow sounds

Sparrows are found worldwide, and their appearance/plumage color depends upon their sub-specie. But usually have a streaked reddish-brown breast, gray crown and back with fine streaks on wings and brown tail edged with white.

Swallows have a forked tail and are blue-black coloration on the top and white on the bottom. The Swallow’s face is usually completely white. Even though young swallows vary in appearance, they are typically similar to their parents except that they are browner on the back with hints of gray or buff; they may also have white patches on their wings.

It is a fact that sparrows and swallows have quite a resemblance to each other. But the experienced eye can easily differentiate between these two birds. The most highlighting differentiation between these two birds is that sparrows are ground feeders while swallows are areal feeders. Along with that, sparrows’ are smaller in size while swallows are a bit larger.