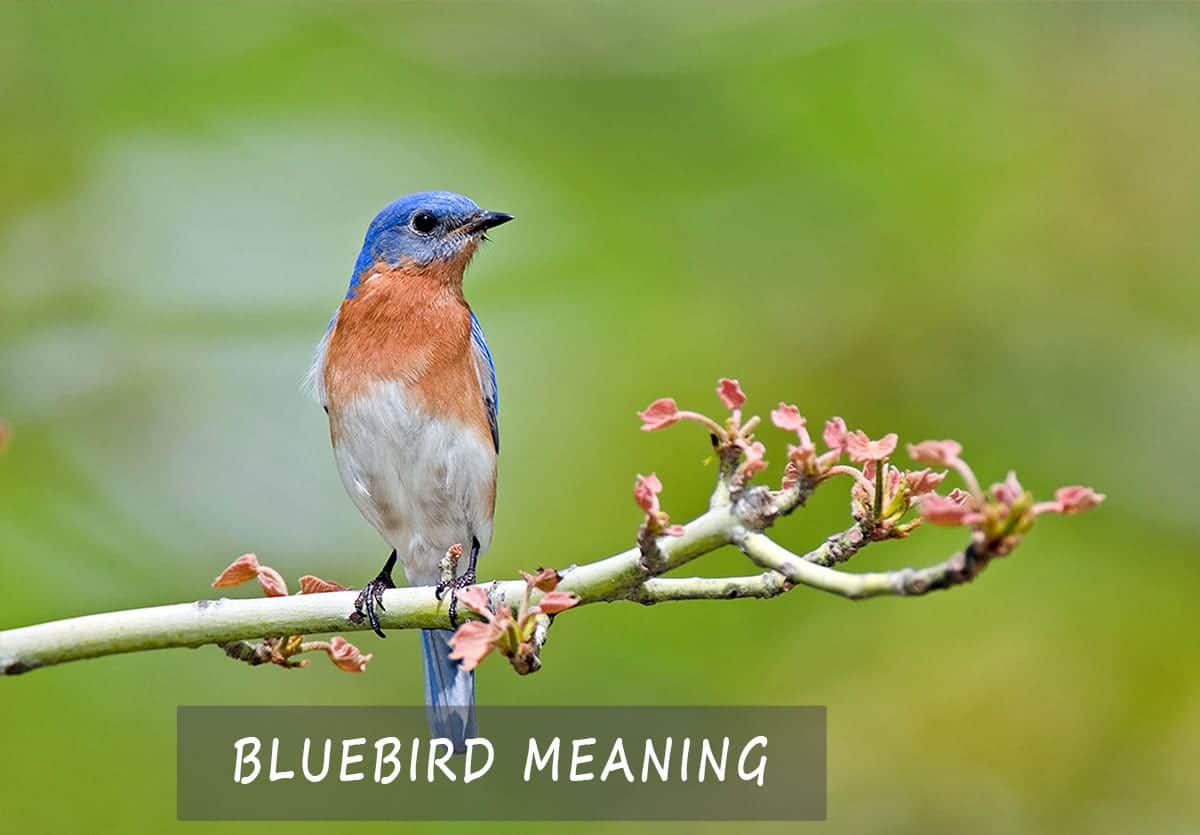 Since ancient times, bluebirds have been a symbol of good luck and happiness. Bluebird meaning reminds us of the beauty of the world around us and the importance of setting yourself free from all your doubts and worries. They serve as an invitation to spend more time appreciating the God-given gifts that we often take for granted.

Bluebirds are medium-sized birds that feed mostly on insects and plants, typically seen in North America sporting a blue or blue and rose beige feather. Although female birds are less brightly colored than their male counterpart, patterns are similar and the difference between the two birds is not noteworthy (don’t mix up the Bluebird with the Blue Jay).

As spirit animal, bluebirds remind us to remain joyful and content and to share and spread these traits with everyone. When they approach, bluebird meaning often signifies that positive occurrences are about to take place and we should prepare ourselves for its arrival. Bluebirds represent spiritual messages with meanings and interpretations that, with proper guidance, can easily be understood.

The most significant bluebird meaning among all is its message for you to embrace happiness. When a bluebird appears, expect satisfaction and bliss to come your way as prosperity is due for a visit. It is an appeal to enjoy life and its wonders and to change the way you look at things, allowing you to appreciate every moment as well as our freedom that we often overlook.

Apart from spreading happiness and joy, here are a few key factors that define the bluebird meaning:

The presence of a bluebird can lift your spirits when you are down. Encounters with them never happen by chance which is why their presence is regarded as extraordinary and a sign of hope, freedom, and encouragement.

Bluebirds represent a spiritual realm that brings signs of loved ones from the heavens. They may be a physical incarnation of an angel that was sent to watch over you. Regarded as God’s messengers, bluebirds are believed to fly alongside angels, carrying the same gentle and loving energy that can soothe every soul.

The bluebird as a symbol of happiness is evident in various cultures, due to its color and song, and dates back thousands of years. Businesses adopt the color blue to their office setting to neutralize the negative influence of high-stress jobs. Spiritual healers would refer to bluebirds as our connection to our Higher Self which enhances our knowledge of the Divine.

Apart from being considered as symbols of honesty, harmony, and security, here are a few stories that embody a bluebird as a spiritual figure:

People believe that angels and spirit guides often present themselves as a bluebird to direct you to a blessing that remains unnoticed. In various translations, the bluebird understands the power of a higher being and is knowledgeable when it comes to migration, prompting sailors to use their imagination to generate good luck.

What Does It Mean When You See A Bluebird?

Artistic, mystical, and spiritual are only a few of the ways to describe the bluebird’s symbolism. Having a deep understanding of these attributes allows us to grasp the reality that things happen for a reason.

Seeing a bluebird represents an end to a struggle that you are currently dealing with. It may be an issue that has bugged you for years, lifting a great weight off your shoulders. Spotting a bluebird may relate to the angelic or spiritual guidance of a loved one who is leading you towards the best decisions and to guide you through a difficult time in your life.

Bluebirds serve as a warning in certain instances, urging you to be more attentive about particular unresolved issues that may bring great fortune or incredible bad luck. The mere sight of a bluebird’s feather translates to a blessing that has always been with you but you choose to ignore. Its presence motivates you to appreciate the little things before they fly out of your sight.

Due to their mystical nature, we often wonder what a bluebird means spiritually. The spiritual significance of bluebirds is powerful as they are believed to be messengers from the spiritual realm. Spotting a bluebird, we are taught to open our hearts and allow the spiritual wisdom sent directly from above.

Bluebirds are an indication from the divine that a guardian is present and is protecting you. The bird’s symbolisms are unique for each of us which is why on rare occasions that they allow their presence to be obvious to us, paying extra attention to yourself, your environment, and the state of your life can prove to be of great importance.

The spiritual representation of blue is one of loyalty, trust, wisdom, sincerity, faith, and more importantly, heaven. Various cultures see the color blue as a symbol of peace that keeps negative energy at bay. Bluebirds as a spirit animal remind us to never lose hope amid trials and to remain humble and joyful as you achieve our goals.

Bluebirds enable us to remain confident regardless of the circumstance, as they prepare us for the struggle months or even years ahead. A bluebird’s presence in prayer and meditation is a sign that we need to slow down and take the time to appreciate even the smallest and simplest things in life.

The bluebird, known also to signify admiration, transition, and love, encourages us to acknowledge the positivity that radiates in its presence, making the beginning of a new life chapter a reason to celebrate.

Having a bluebird as a totem signifies that you thrive in making everyone feel comfortable. It means that you enjoy being in the company of others, especially the folks that you rely on, trust, and enjoy spending life with.

Bluebird totem animals always find a way to turn dreams into reality, strategizing optimally to give them an edge over the others. It may also mean that a person is not only romantic and monogamous but is also very protective of their nest, not allowing anyone to disrupt the love and peace in their lives. It also allows the totem’s carrier to become a spiritual guide to others as it brings them closer to a higher being’s divine presence.

Superstitions Regarding the Bluebird

Most people have this negative notion about superstitions. The sheer mention of the word sends us running for cover as it usually is an introduction to a bad omen or an unpleasant event. Bluebirds, known to be harbingers of happiness and good fortune, are defined by businesses as a very profitable period for a firm.

Aside from the belief that they are messengers from heaven and that a bluebird in your presence is simply a spirit guide keeping you company, these positive, calm, and fun-loving creatures just do not go well together with superstitions.

The Bluebird Symbolism in Different Cultures

Native Americans believe that the bluebird has a deep connection with peace and happiness. Their feathers are often associated with peace, healing, and hope!

In Chinese culture, this beautiful bird is symbolic of intelligence as well as prosperity! Seeing one of these birds in your dream may be a symbol for new hopes or wishes coming true.

Japan believes that seeing this lovely creature brings good fortune – so if you are having trouble finding love they say grab hold of your dreams and see them through to fruition. On the other hand, it is also believed by some people who study Japan’s folklore that dreaming about the Bluebird foretells imminent danger or problems just waiting to happen…so beware?

In Celtic culture, the Bluebird is a symbolic representation of protection from Evil Spirits so having this creature cross paths with you means as long as they’re around nothing bad can happen…the more bluebirds seen in one’s dream signifies great luck!

In Christian belief the bluebird represents hope- and it says that if you see one, they are trying to show you that there will be an end to your current troubles soon! Seeing this bird may also represent someone who has gone

Bird tattoos can hold various meanings but the Bluebirds tattoo symbolizes goodness and innocence and are a favored design of nautical tattoo enthusiasts. A bluebird tat is often associated with its mythological significance such as prosperity, positivity, joy, and spring’s arrival, meaning hope. The color represents the vastness of the sky during the day as it eliminates all the darkness and negativity.

Cultures, folklore, mythologies, and religion reflect the spiritual significance of the bluebird. They are a personification of happiness and good fortune befalling anyone who puts their trust in them. Bluebirds as our spiritual guide simply leave no room for you to feel blue.

The blue jay spirit animal is quite powerful. It holds the power that will lead you to your success and happiness. Learn more about this creature here!

3 thoughts on “The Bluebird Meaning (Chasing Your Blues Away)”