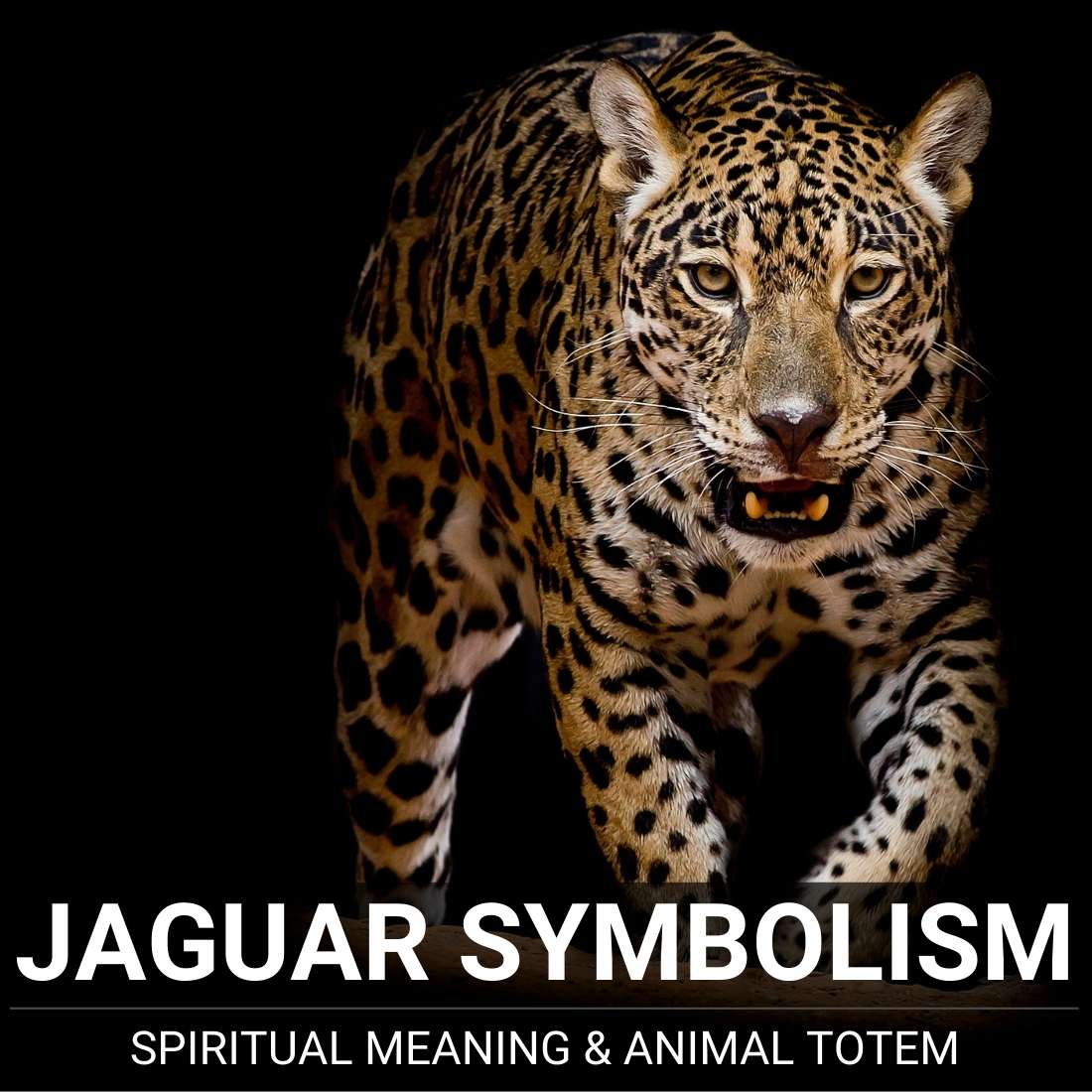 Jaguar Symbolism: What The Presence Of This Gorgeous Wild Cat Means

While it may take a considerable amount of persuasion to urge someone to get close enough to examine whether it has shorter legs and rose-shaped specks, it is those particular features that separate the jaguar from other spotted big cats. Moving with great finesse all while carrying its stocky pit bull-like physique, these highly territorial mammals come creeping into our lives with messages of encouragement for us to gird up and face our anxieties and fears. A large cat that wanders the jungles of South America, let’s hunker down and pounce on the fascinating jaguar symbolism.

“It’s better not to poke a jaguar with a short staff.”

What does a jaguar symbolize?

Do you know what the jaguar symbolizes? This powerful animal is steeped in symbolism, and has different meanings for different cultures. In North America, the jaguar is seen as a spirit animal and totem, and is revered for its strength, power, and grace. In South America, the jaguar is seen as a symbol of power and strength. Let’s take a closer look at the meaning of jaguar symbolism, and see what this magnificent creature can teach us.

Recognized as among the biggest cats in the world, the extraordinary way they hunt wherein they catch their prey by the head before mangling them down has made any encounter with these powerful beasts terrifying and fearsome. However, there is more to these strikingly aggressive predators than keeping all the other animals on their toes.

The Jaguar is a powerful animal that can take down even the largest prey in its jungle. The jaguar’s coat has spots, making it more efficient at hunting and escaping from predators who would want to eat them or wear their skins for protection against scratches. It lives close with humans because this species does not mind water much unlike other cats but still needs plenty of space when catching fish since they’re very good swimmers too!

Here’s a look at what the appearance of the jaguar in your life means:

Observed to live a life in solitary except during breeding season, the jaguar represents our need to have our personal space as it helps free our minds from the distraction of everyday life. Not only does this awesome power animal teach us to focus on the most important matters better, but it also inspires us to come up with creative solutions to the problems we face daily.

I have faith in me

From the thickest jungle to the open country and even the zoo, jaguars are seen strutting fearlessly and with great confidence. While its strength, quickness, and agility make it almost effortless for this assertive animal to walk with its head held up high, its presence tells us to trust our own abilities for they are often enough to help us achieve our dreams. Its appearance reminds us that although there are times when things may not go how we wish them to, our skills and talents will allow us to handle the challenges that come our way.

Letting the cat out of the bag

As one of the two big cats that cannot roar, jaguars grunt, growl, and even meow as their means to communicate with their peers. Gently creeping into our consciousness, it indicates the value of good communication as it helps in developing a healthy and welcoming relationship. Since the jaguar can be quite aggressive, particularly when defending its territory, its presence reminds us how we should be considerate and pleasant with our words to avoid hurting others with our often assertive approach.

As perhaps the only cat that embraces water, these excellent swimmers represent our need to deal with issues that have long prevented us from moving forward. The jaguar spirit animal would often appear when it feels that it’s time for us to at least momentarily ditch living in solitary and reconnect particularly with those who mean the most to us. An image of gentleness and warmth, particularly the female when it’s watching over its young, it implies our need to find and settle in a romantic relationship for it brings nothing but peace, happiness, and bliss.

Vigorous, energetic, and lightning on its feet, having the jaguar as a spirit animal signifies our need to always be on the lookout for opportunities and to be quick in seizing them as they come. A gorgeous creature of orange fur and spots that are commonly referred to as rosettes, it inspires us to appreciate the marvelous charm of nature as well as the beauty that lies within ourselves. An image of grace even when stalking its prey during a hunt, the jaguar’s unexpected appearance tells us how we should strive to be pleasing and refined even in the most challenging and stressful times.

Considered a God in several pre-Columbian cultures for its attractiveness and intelligence, having the jaguar totem as your guide helps awaken your capacity to see through people’s motives and intentions. Not only does it make you physically irresistible to others, but it also teaches us to be mindful of the threats as well as the opportunities that may unexpectedly appear. A nocturnal creature that uses its amazing vision to excellently see in the dark, it enhances our ability to recognize the negative energy that surrounds us. Moving swiftly and efficiently even when blanketed by darkness, it signifies our ability to do awesome things even when burdened by challenges.

As the jaguar shows great patience when it stealthily stalks its prey, this animal totem teaches us to take time and plan things well before we jump into any decisions that may have long-lasting effects on our lives. Gifted with features that allow it to blend in with its environment, the jaguar power animal enables you to bring about success all while hardly being noticed.

Extremely rare and, sadly, endangered, seeing a black jaguar in the wild is now a novelty that occurs infrequently. Add to that the creature’s night-loving nature, then the jaguar meaning is somewhat enshrouded with more mystery and great significance. Since they become even more difficult to detect in the dark, these strong-willed animals teach us how we should remain silent and wait for the most opportune time before we let our actions known. By giving you the ability to blend perfectly well into your environment, these remarkable creatures allow you to put on display the hidden skills and talents that you possess and to use them as you carve your path towards success.

While the jaguar’s unforeseen yet wonderful presence could indicate your need to conceal yourself to avoid conflict, a black jaguar is a reminder that a particularly dark and challenging period in your life is about to pass and that by simply trusting your instincts, favorable circumstances will soon arrive. Since black is often associated with the idea of change and transition, this stealthy spirit animal is reminding us to never lose hope and to keep moving forward no matter how dark and impossible the realization of our dreams seems.

The jaguar has been a symbol of power and aggressiveness for centuries. Along with the Aztecs, Mayans; the Inca built temples to this fierce animal because it embodies these qualities that are important in times when you need someone who will face their fears or enemies on your behalf.

The Incas saw courage as well–their word “jungle” comes from Spanish meaning “to fight” so there must have seemed no difference between what happened inside one’s home versus outside if both involved violence!

The jaguar is seen as the king of animals in Mayan mythology and has many symbolic meanings. For example, he represents darkness because it’s out only during nighttime that we can see this furry beast thrive with his bright coloration which makes up half their diet according to locals who live off them here!

In Maya beliefs, the jaguar is said to have abilities that allow it cross between worlds. During daytime people associated with life and earthy matters are active while at night time those of spiritual essence can be found working their magic on behalf of all who dwell beneath this realm as well above- simply put: “Maya gods whose attributes or garments include cats may very well hail from Angor Wat.”

Jaguars are associated with water lilies and fertility, which is why some Mayan believed that this animal has the power to make plants grow. The Jaguar also had an association as a sacred creature in ancient Mexico because they were viewed highly by many cultures across Central America for their strength while others thought of them more along the lines on what we know today – big cats who hunt small ones!

The Jaguar has a long and complicated history in Mesoamerican cultures. There are examples from the mid-Formative period, which date back to around 1500 BC or before!

The meaning of dreaming of jaguars

The jaguar is a powerful animal that is steeped in symbolism and meaning. If you are lucky enough to dream of this magnificent creature, it could be a sign that something important is about to happen in your life. Whether it’s a new journey or a warning to beware of your enemies, the jaguar is sure to leave an impression.

The Jaguar is a symbol of power and strength in some cultures, but it can also be seen as dangerous if you don’t understand its true nature. If dreams about jags make their way into your subconscious mind then there might just have been an attack on the part or even chase after by this animal because they’re known for being guardians at heart with raw feminine energy which will manifest when we resist our own inner truths (which could very well come from within).

I would recommend reflecting upon any YIN energies that seem out-of-balance so I’m sure everything stays balanced between light & dark sides without anything gaining too much momentum until checked.

A cat that doesn’t cringe at the thought of its feet getting wet, the jaguar is an exceptional spirit animal that encourages us to succeed in reaching extraordinary achievements. An image of beauty, strength, and self-reliance whose name translates to “he who kills with one leap,” the magnificent meaning of its symbolism has helped the jaguar live up to its label.