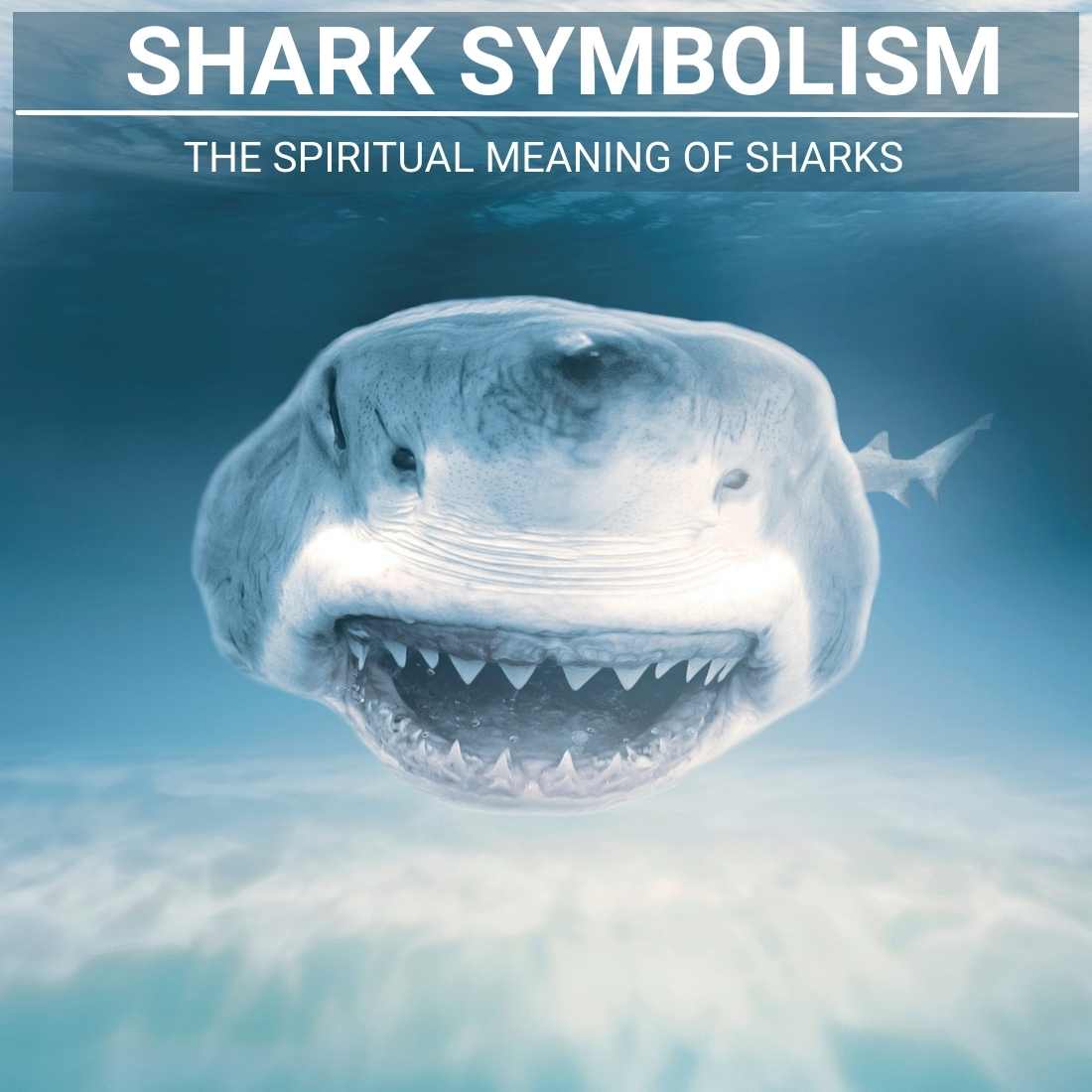 Wisdom Teeth: A Nip Into The Wonderful Meaning Of Shark Symbolism

Bearing an almost notorious prominence as a relentless monster of the deep, sharks play a vital role in maintaining the balance in the planet’s marine ecosystem. Sitting atop the ocean’s food chain, these master hunters, which can track their prey with amazing precision, are admired and respected for being one of the most formidable creatures of the sea.

While their infamous and menacing reputation has long forewarned us about the dangers of immersing ourselves in deep waters, this spirit animal lends us its remarkable power and allows us to take advantage of it in our daily lives.

From the toys and shirts that kids fearlessly wield to shark week and the terrifying movies of a tornado full of them, let’s circle in and bite into the fascinating shark symbolism.

What does a shark symbolize?

Asserting their dominance over the countless sea creatures, the shark’s presence undoubtedly commands authority and respect. Known for their courage, vitality, and determination, their imposing presence implies confidence that inspires us to turn our fears into strengths.

Considered by most as the king of the sea, these magnificent and impressive beasts remind us to never dwell on our choices but focus on our goals instead and to not allow anything to stop us from achieving them at any time.

While some male sharks prefer to wander on their lonesome, few other species stay in groups and roam the oceans to catch their prey. Led by an alpha, these strong spirit animals can be called upon in times when you feel that you lack and are in dire need of a good leader.

Well-known for not backing down from a fight, sharks tend to protect their families from any potential predators which indicate braveness, guardianship, and the importance of family. Not only do they lead their ensemble as they hunt across the sea, but they also act as the group’s guardian and protector which puts to light our tendency to make certain that our families are safe before we set out on our own.

Recognized to have existed even before the dinosaurs, the shark’s intelligent nature has allowed them to outlast even the most ferocious among the animals. Perceptive and wise, these resourceful creatures signify the knowledge and wisdom that inactively lie within us and their need to be awakened so we can utilize them to find and snare the opportunities around us.

Rarely overpowered in combat, this formidable animal can control its territory with ease, signifying your need to uphold your own authority. An animal that seldom gives up on prey, its determination encourages us to employ our skills and to never back down from any challenges or difficulties, no matter what.

While sharks are one of those creatures that seem to understand that there is strength in numbers, the males of their species learn how to be independent early. Making the most damage when they hunt alone, they say that while staying within our group has its many advantages, you will only realize your true potential if you show your grit and roam the seas freely on your own.

Perhaps because of the countless images of their sharp teeth as well as their ruthless and unpredictable nature, sharks have long been recognized as one of the most frightening creatures on earth. While they can effortlessly finish off prey in a matter of seconds, the smooth yet haunting precision of their presence in the ocean expresses a message of authority to whomever they meet.

Stopping only to rest, they convey to us the value of always pushing forward for us to obtain our goals and ambitions. As a creature that has survived the test of time, they are deemed as a symbol of wisdom, superiority, and focus as they swim directly to their target and create opportunities for themselves.

Aggressive yet highly productive, these persistent and uncompromising sea creatures with their sterile appearance encourage us to persistently swim after our goals and to keep our focus until we have finally achieved them. A spirit animal that inspires us to stay dynamic, efficient, and mysterious, the shark would often ominously glide into our presence to remind us that while simplicity is not always a popular choice, you can never go wrong if you keep on doing everything with a purpose.

Much like us, research has shown that sharks display varying personalities. While some can be social and confident and others can be more cautious and shy, the common factor that these monsters have is that they remain focused, self-assured, and are always looking to move forward. Although their faces do not show any clear expressions, one look at these marvelous creatures and you know that they carry a message of firm authority.

A primal animal that symbolizes energy, perception, and superiority, those who connect with the shark as their totem animal are known to have the ability to properly manage their environment as it is crucial in their survival in the deepest waters.

Instinctive, calculating, and unsurprisingly smart, shark totems serve as our guide as we navigate through the dire straits of life. Constantly on the move and are never seen sitting idly to wait for an opportunity, they are geared to seize anything that comes into their presence with zest and enthusiasm.

As they sink the minute they become motionless, these perpetually moving, powerful, and driven sea creatures instill in us that though there may be times when we also feel tired and need rest, actively moving forward allows us to grow and come across adventures and experiences that bring great exuberance.

The Shark symbolism in different cultures

In many cultures, sharks are seen as symbols of power and strength. For example, in Native American culture, the shark is seen as a symbol of determination and strength. The shark is often viewed as a protector of those who need it most. In Hawaii, sharks are considered to be guardians of the ocean. They are thought to help keep balance in the ocean and protect humans from harm.

The symbolism of the shark can vary depending on the culture. However, there are some common themes that run throughout all cultures. Sharks are often seen as symbols of power, strength, protection, and determination. They can help guide us on our path in life and teach us how to overcome challenges with grace and ease!

The English word “shark” is an adaptation of the Mayan name for these animals, which was xooch. This term became popularized during 1500s when it entered into European culture through Spanish speakers and eventually made its way to America where they were known as sea dogs before being referred to by their current title; “sharks.” The Mayans were one of the first cultures to have contact with these animals and they had a great reverence for them. They believed that sharks were spiritual creatures that could help guide humans on their path in life.

There are many different types of mythology concerning sharks. For instance, some California Indian tribes such as the Pomo had similar myths to what Americans today think they know about these creatures: that their dangerous and violent man-eaters (although in actuality it’s rare for them actually attack humans). Other coastal native populations believe seeing a nearby finned fish near shore signals impending storms or hurricanes soon enough!

The Hawaiian sharks play an important role in native mythology. The Polynesian people are not American Indians, but their traditional religious beliefs often parallel those of other indigenous groups across America. For example, there is a website that includes stories about how the ancient Hawaiians saw these fish-like creatures as gods and what they did when one became angry at another for wrongdoing.

Asian cultures have a very different view of sharks when compared to Native Americans. For example, in China, sharks are seen as symbols of good fortune and wealth. They are often associated with the water element and are thought to bring prosperity and abundance into people’s lives. In Japan, sharks are considered to be symbols of strength and determination. They are often viewed as protectors of those who need it most.

European cultures generally have a negative view of sharks when compared to other cultures around the world. This is likely due to the fact that Europe is not surrounded by shark-infested waters like many other parts of the world are. Sharks are often portrayed as ruthless killers in the media and this has led to a general fear of these animals.

The Bible does not mention sharks specifically, but they are often used as symbols in Christian culture. For example, the shark can be seen as a symbol of sin. This is because sharks are relentless predators that never give up. They are constantly on the hunt for their next meal and will stop at nothing to get it. This can be interpreted as a metaphor for how sin never stops seeking us out and always wants to consume us.

Sharks can also be seen as symbols of courage. This is because sharks are some of the most feared animals in the world and yet they still manage to face their fears every day. They are an inspiration to us all to overcome our challenges with grace and ease!

Boasting five rows of teeth that consist of 300 choppers at any one time, various cultures have given the shark’s tooth its own unique and significant meaning. As an old Hawaiian legend has it, an ancient warrior once wore a shark tooth into battle against a powerful sea god and came out victorious. Not only did this myth propel the shark tooth into being an image of protection and great strength, but it also gave birth to the belief that wearing it prevents shark attacks.

Commonly sported in Hawaii where sharks are as prevalent as volcanoes and ukuleles, they have also been used to create tools and weapons that enabled our ancestors to remain superior over other species as they led the charge towards evolution.

Today, aside from it being an extremely cool piece of jewelry, many of us believe that tapping into the shark’s mighty teeth helps us to adapt and survive our varying social situations. By connecting with these teeth, the owner acquires the confidence (see symbolism for confidence) and courage that allows them to efficiently manage issues and easily turn things in their favor.

By employing the strength and boldness of the shark, we learn that the shark’s presence in our lives stirs us to remain protective of those who are most dear to us. As it would often wade into our consciousness in times of turbulence and confusion, it urges us to stay focused on our goals and not falter much like when this awesome spirit animal smells blood in the water.