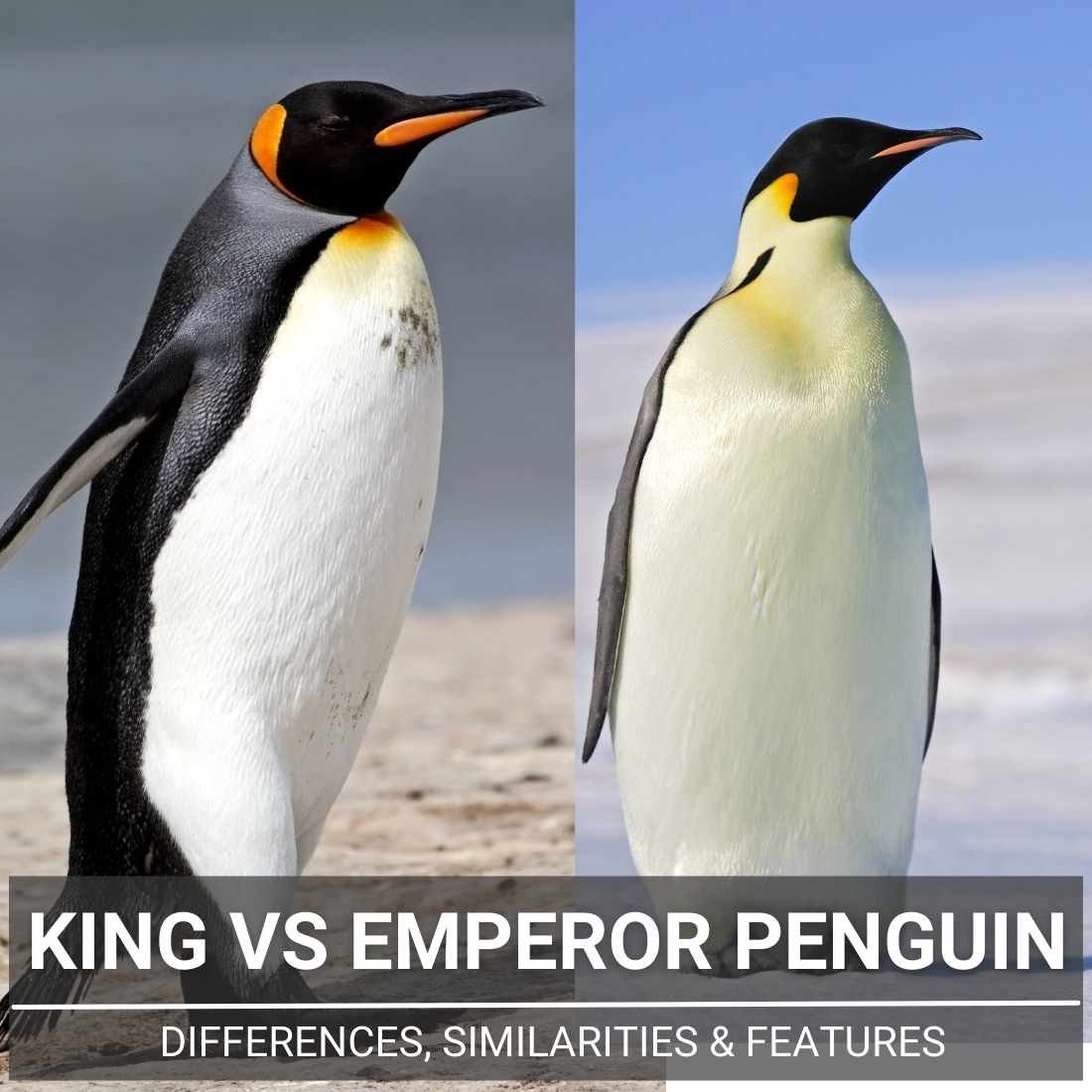 Penguin species are one of the most interesting birds on Earth.  They are also known as the “winged-tux” because of their black and white body color, which provides them with amazing camouflage while they swim underwater in search of food, like squid and fish.

All penguins are flightless birds that live in the Southern Hemisphere. They spend most of their lives at sea and only come ashore to breed.

But one question remains: how do you tell an emperor penguin from a king penguin? Though they both belong to the genus Aptenodytes, these two kinds of penguins have some distinguishing features that set them apart.

Both species can be found in the Antarctic region of Earth, with King Penguins residing more to the north than their counterpart species. These differences between them may seem superficial at first glance, but they actually lead to some pretty interesting differences below the surface.

Here is a quick breakdown of all the distinctions between the King Penguin vs Emperor Penguin.

First of all, the only way to tell them apart is by looking at their size.  Emperor penguins are slightly larger than king ones: males of the first species can reach 1.2m, while males of the second measure about 1.1 m; females of both species are smaller (about 0.8 meters for king penguins and 0.9 for emperors).  Other than that, they look alike: they have a black back, white abdomen and grey-blue neck and head with a yellow crown on top of their heads!

Similar appearance… but what makes them so different?  The answer is simple: the way they breed! King penguins nest directly on the ground in small colonies (up to 500 nests per hectare) found in large rookeries at very high densities; on the other side, emperor penguins choose solid ice floes as their breeding habitat and form large colonies (up to 10,000 birds).  Besides that, kings live in the southern hemisphere, and emperors only live in Antarctica.

When examining these two birds scientifically, it becomes clear that quite a few physical distinctions between them set them apart from each other. When examining each bird’s wings, it can also be seen that King Penguins have much shorter and stouter wings than those possessed by an Emperor Penguin. This is because a broader wing surface area would cause a wind chill effect and slow them down when hunting or traveling through chilly weather in Antarctica.

In addition to physical variation between these two types of birds, some differences in behavior set them apart. For example, Emperor Penguins are known for traveling great distances at sea to find enough food to feed their young and sustain themselves throughout the year, while King penguins travel shorter distances.

King Penguins may eat slightly different types of fish than an Emperor Penguin does, but they tend to stay closer to home thanks to the lack of food availability around much of Antarctica. Also, Emperors often live solitary outside the breeding season, while Kings typically lived together in colonies during this time. It’s important to note that these penguins aren’t necessarily friends with each other when living together in a colony; they simply share similar interests since it’s easier for them to find mating partners and food when living near one another.

King Penguin and Emperor Penguins are the largest of all other penguin species, and their main/primary diet is comprised of fish. Along with that, neither bird molts nor sheds its feathers to grow new ones as other birds do, and they’re also the only two species of penguins who can’t fully fly; both types use their flippers to propel themselves through the water instead.

King Penguins are excellent swimmers but poor walkers, so when on land, they waddle around. They also get into groups to conserve heat by positioning themselves in circles or forming a “rookery.”

Here you can check all King Penguin sounds

Emperor penguin is the only penguin species that breeds during the Antarctic winter. Its thick waterproof feather keeps it very warm in-between incubating its egg on top of its feet and balancing a chick on top of this egg for more than two months without feeding or drinking water. This also enables them to dive down to 500 meters below sea level without having their blood freeze.

Here you can check all Emperor Penguin sounds

King Penguins found around South Africa can easily be identified by their large size and unique body shape. They also have a much more upright stance and the bright orange bill that differentiate them from other species of penguins.

Penguins have evolved over time to adapt to their marine environment, and most live out their entire life at sea, only coming ashore for mating season. In fact, they are so adapted that most cannot survive on land!

King and emperor penguins are two types of penguins living in the same area. They belong to the genus Aptenodytes, family Spheniscidae and order Sphenisciformes.

Anyone who has ever visited Antarctica must have seen these penguins strolling slowly on the ground or swimming in large groups and most probably isn’t aware that they actually belong to the same species.

Read also our posts: The Symbolism Behind The Penguin and Puffin Vs Penguin.