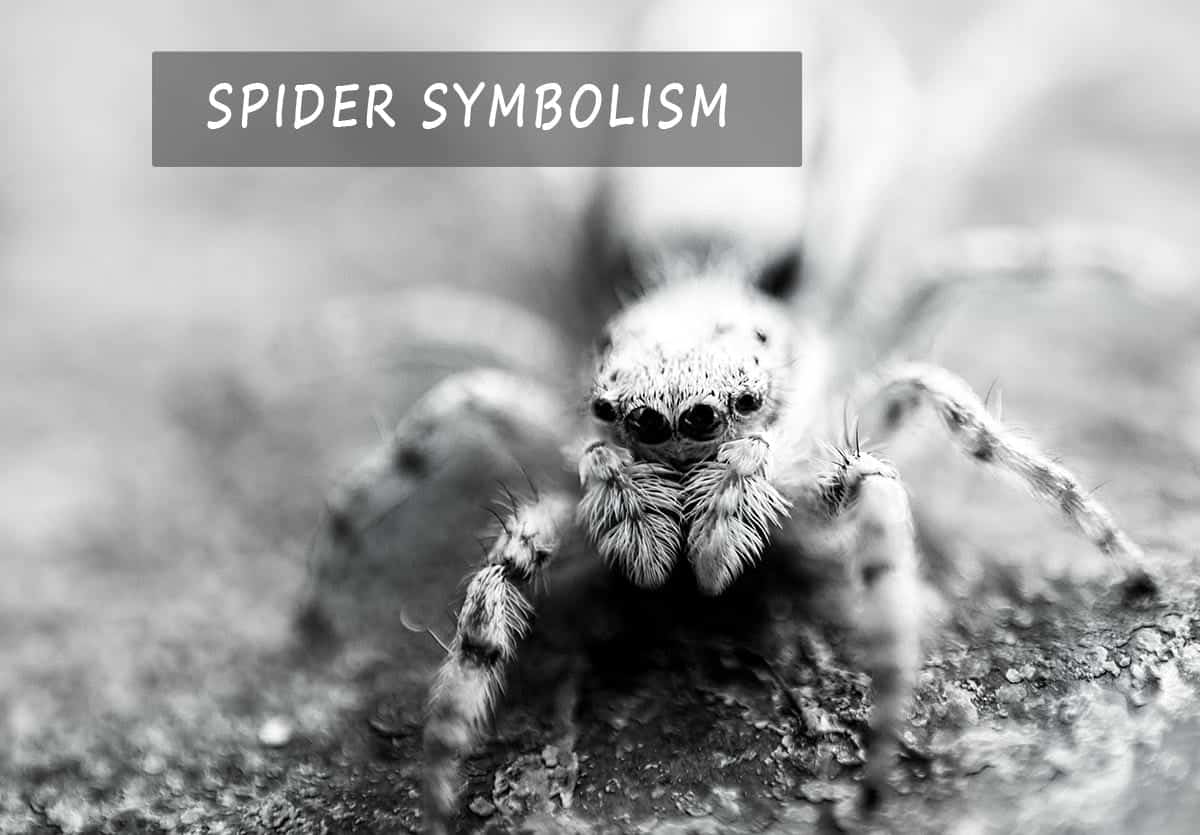 Spiders are often looked at as evil and pests. Many people don’t know that they have spiritual meaning to them and they aren’t necessarily a bad omen. There is great meaning to spiders and what they bring to the world. The spider and their web have much bearing on people and when we look for the symbolism associated with these creatures we will see many parallels between them and us. This article will discuss the meaning of spiders and their symbolism.

The meaning for the spider is power, mystery, or growth. This is an ancient meaning and has been around for centuries. The spider is a powerful. mysterious creature and that may be why so many people fear it. The spider is believed to give a person the power to work magic over things and people. The wisdom of the spider carries many meanings. This includes:

Despite the fear that the spider evokes it is actually a good omen that exudes strength, mystery and wisdom. The spider meaning can be seen as a helper, something that inspires people, and shows them where they need to work in their lives. The spider can be seen as having meaning of how life works. We gain wisdom, we change as we grow, we look for divine inspiration and learn from our mistakes. The spider means endurance and rebuilding. When a spider’s web gets broken it rebuilds. Humans can see that as a sign to rebuild there lives when things don’t go as planned. We can look to the spider as a symbol to try again and ever give up.

What Does the Spider Symbolize?

In many Native American tribes, the spider symbolizes strength (check more animals that represent strength). It is believed if a warrior adorns himself with a spider a bullet would pass right through him. The warrior would be unharmed and would go on to fight another day. It is also thought the spider is a trickster and should be feared. However, the spider should also be revered since it is wise and powerful. The legs also have meaning to some cultures and symbolize the winds of change. In the Southwestern United States, the spider was credit with giving the people the alphabet. The spider was also believed to have given us writing and is looked upon as feminine wisdom.

The Victorian view of the spider was seen as part of the animal economy. The Hindu’s believed that the spider while sitting in it’s web represented being caught in the illusion of the physical world. The spider also symbolizes starting anew, when something happens to its web a spider builds again. It shows us that is is here to stay and will endure, it doesn’t give up and move, it doesn’t lie down and say no more. It builds again and gets on with its life. A spider is also a symbol for being careful, it doesn’t call to much attention to itself because it knows danger is everywhere. A spider will watch and observe before deciding what move to make.

It studies its prey to see when the best time to strike is, it looks for larger animals so it can avoid them. The spider is clever and cunning, Never will you see a spider rush into a situation before it is clear it’s safe to do so. We humans should learn from the spider what it means to be careful. Too often we rush headlong into a decision and find it wasn’t right for us. If only we watched and learned from the spider. We’d know what it means to be careful and think before acting on impulse. The spider is magnificent in the way it can get out of danger because it knows what to look for. One more spider symbolism is having the patience to wait for its prey to come for it. This symbolizes wisdom as well. The spider knows it’s not wise to just give chase and give the prey a chance to getaway. Instead, it sits on its web and lets the prey come to him. He watches and when the time is right pounces. People could learn to use this same kind of wisdom.

We need to know when to go after an opportunity and when to wait for a better time. By being more like the spider we could save ourselves a lot of trouble and heartache. We’d also know how to tell what is good for us better and take advantage of that opportunity. The wisdom of the spider is beyond what we can understand, but most definitely learn from if we were to try.

There can be many different meanings to dreaming about spiders. It often comes as a means to help us better understand and get through situations that may be difficult. The spider may frighten a person in a dream and it is important that they understand why. It may not be the spider that’s fear but a situation a person finds themselves in. If the dreamer finds that they are merely watching the spider as it lives it’s life. This could mean that they are watching a situation play out in their own life. If spiders are crawling on a person it is often symbolic of feminine power or an overbearing mother figure. Perhaps the dreamer is worried about a woman in their life. The location of the spider in the dream can be important as well. If the spider is in a bedroom it may represent that feminine energy is messing with the dreamer’s life. Since dreaming of spiders can mean more than one thing it’s important to understand how one feels, and where they were when dreaming of the spider. This can help in understanding what the spider symbolism his dream meant.

The dreamer could also be putting how he feels about himself onto the spider. Maybe the dreamer is unhappy with their job, relationship, or living situation. The spider could actually represent those feelings and trying to show that to the dreamer.

The spider web can symbolize fate, destiny, and the way life had a crazy way people cross paths in life’s web. Spider webs draw our attention to our life choices. They have a way of showing us how we often manipulate our thinking in order to get what we want in life. A spider’s web is it’s home. it eats there, lays its eggs there, and sleeps there. The web is where a spider spends many hours of its day. This can also have meany for people as we look at the functionality and design of the web. We can view this as our lives being our home and how we weave our way in our jobs, houses, relationships. We go through life making decisions, forging relationships, and trying to get ahead. All this to try to get what we want, to go where we want in life.

The web can also be viewed as meaning the vibration we give off. Like a web we have layers and the rings of the web are each a layer with the center being made of the highest vibration. The web too gives off vibration as the spider or its prey moved across it. The fact that we humans have vibration and so does the web can be seen as connecting us to the spider even more. The spider web is often seen as a good omen to some cultures. In Ukraine, if you find a spider web in the house on Christmas morning it means the household will have good luck. In Germany, if a woman finds a web while cleaning it symbolizes that the Christ child is coming to bless her home. All in all the spider web seems to symbolize only good fortune and goes against the grain of the belief that spiders represent bad things to come that many people believe.

The web shows that the spider is self-reliant and doesn’t need anything thing to help it live. We can use this in our own lives, to help us know when it’s okay to do things in our own way. The web is hard to break, this can show the spider’s self-reliance as well. The spinning of the web is likened to how life spins. It goes in a perfect circle round and round. Never the same but always meeting itself as the circle is complete. Our lives often take different paths and can branch off from what we thought we wanted but eventually circle back and we can often have a chance to start over.

The spider weaving its web is seen as being a life weaver, after all, that is how the spider lives. They rely on the vibrations of the web to let them know something is on the web, the web is a place where life begins for spiders. Spider webs can endure many things without breaking. Recently a web that is over a million years old was found. This can be seen in the spiritual world as life never ends and can keep going through many trials.

Spiders Crawling on You

When a spider crawls on a person it could be that it is showing them they weave their own destiny. It may also mean that the spider wants the person to allow people to get to know them more personally. Allow people to get closer and tear down any walls the person may have up. However, it could also be that the spider is saying despite the stage of life they are in now the person still has things to figure out and learn. A spider crawling on you seems to mean that a person needs to break down barriers, get closer to people, pay attention to situations so they can learn from them. The spider is showing the person there is much growing to do and not to ignore the signs that they are being given.

The spider crawling on a person is often being told to look at life from an elevated viewpoint. To always be looking for the next lesson that life is handing you the way. Never feel as if you have learned all there is to know and always be willing to grow. It could also be giving the person ideas such as how to change a situation, grow in an area of their life, or help a relationship where it is weak. It is always important to try to listen to what a spider is trying to say.

Spiders are lovely creatures that we need not fear but to revere and even try to emulate. The spider is beautiful and wise, it is a creature from which we can learn so much from. The spider has so many great qualities if people only tried harder to understand it. Maybe we’d be more willing to coexist with them and not judge so harshly.

Spiritual Meaning of Spiders in House

Spiders in your house are certainly nothing people strive for, however, let’s think twice. On one hand, hardly any spiders living in humans houses are dangerous (there are only a few, in fact, there are only two dangerous venomous spider types found in the United States: the Black Widow and Brown Recluse). And on the other hand the spider hunt and eat insects that can be harmful to us such as wasps or mosquitoes.

When you suffer from arachnophobia (fear of spiders) seeing even the tiniest spider might turn out to be a traumatic event and would not bring them good luck. If you can think more positively of spiders (which you should really), we recommend looking at it as a lucky sign, regardless of where you see them in your house (bedroom bathroom, living room, kitchen, etc.)

[Video] The Spider as a Spirit Guide