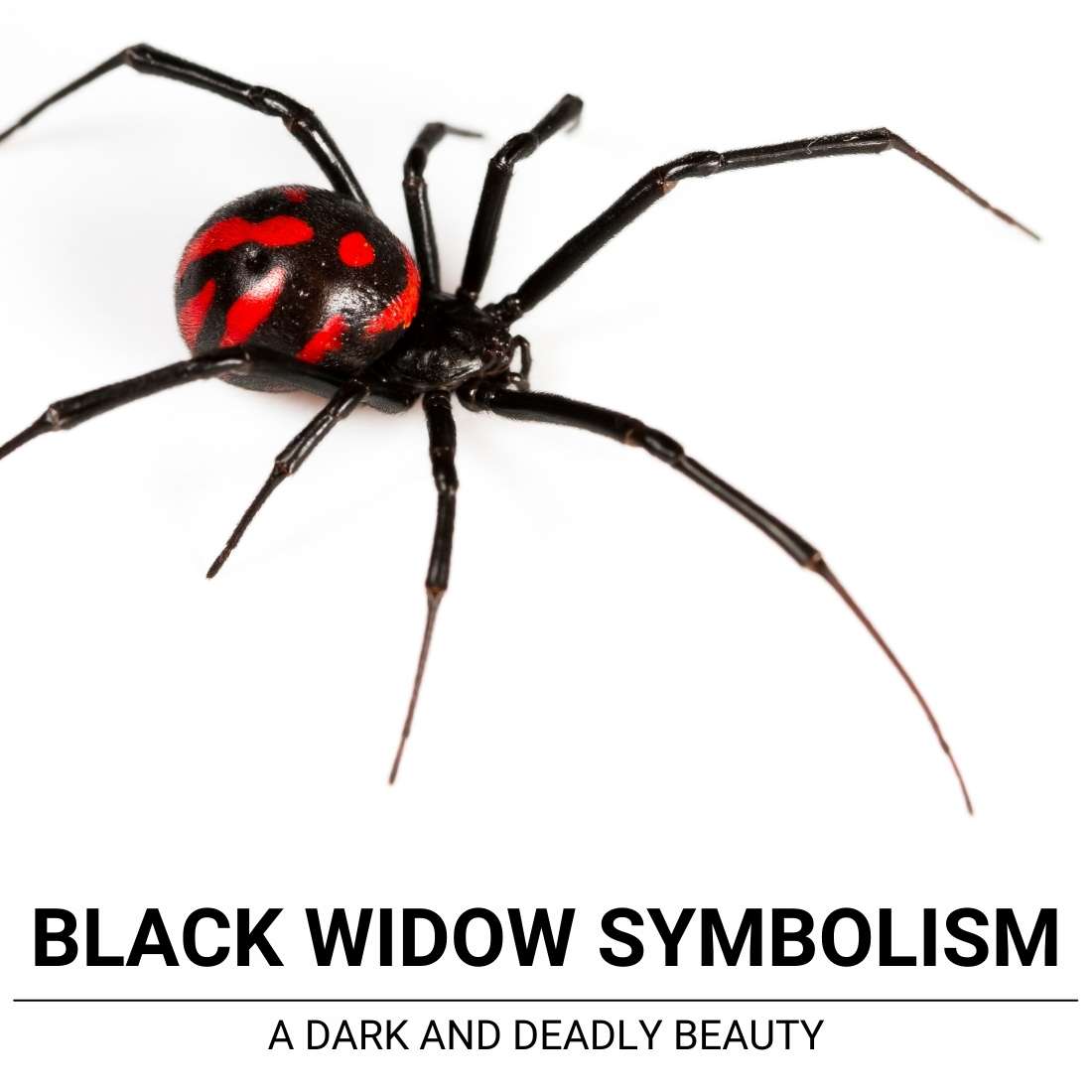 A Web’s Host: Spinning Together The Meaning Of The Black Widow

Perceived by many as perhaps one of the most venomous and fearsome creatures on the planet, the mere mention of the black widow spider is enough to trigger worried glances and exclamations. Identifiable by their often dark black color and a red mark on their abdomen that resembles the shape of an hourglass, the reputation of these reclusive arachnids has long made them a symbol of twisted love, betrayal, and destruction. Admired for its amazingly strong web yet feared for its extremely lethal venom, let’s spin into the spellbinding black widow symbolism.

What does the black widow Symbolize?

When people talk about spiders or in particular the black widow spider, the image of a menacing and unmerciful creature with a strange post-coital appetite is what likely comes to mind. However, these spiders aren’t as dangerous as documentaries and magazines suggest.

Equipped with spider venom that is believed to be 15 times stronger than that of a rattlesnake, the presence of black widows is enough to bring shivers to anyone. Daunting and frightening as it may seem, the appearance of this spider could be an indication of a strong desire that you have developed and has completely gone out of control. While its visit may simply be a reminder of your need for lifestyle changes, it might be best for you to listen to its call as its numerous eyes may have already seen its wonderful effects.

You can read more about the black widow’s venom here.

Much like most members of their species, a black widow spider boasts of its eight eyes that allow it to protect itself from incoming predators that may bring trouble from all sides. Quite simply, the black widow symbolizes our need to heed and be mindful of our intuitions. As it often crosses our path in the most unexpected time, it is telling us to avoid focusing on the negativity that comes our way and be more attentive to the spiritual message brought by our inner voice instead.

Spinning a large spider web which they use to ensnare their prey and to keep a cocoon with countless eggs, the black widow is seen by many as a symbol of inspiration and creativity. As they have been observed to cover their prey with silk once it has been tricked and trapped, their sudden presence in your life signifies your capacity to reach for and achieve your goals.

Known to spend their time in solitary except during their often brutal mating ritual, black widow spiders are perceived by some to imply freedom, independence, and self-reliance. Offering a tremendous risk to their male spiders’ counterparts, the female’s strange behavior of devouring their partners after mating largely resonates with the call for gender equality as well as our ability to use our skills to singlehandedly take on every challenge that life throws at us.

The black widow also made it on our list of animals associated with feminity.

While the bite of a black widow spider is usually not as lethal as the stories shared by most people, they are no doubt a threat and should be avoided if possible. Taking about an hour before the bite’s pain occurs and then followed by a range of intense symptoms, it is understandable if a black widow’s presence prompts you to drop everything and run. But, by doing so, you might miss out on the remarkable spider spiritual meaning that it brings such as the spiritual significance of birth, growth, death, and rebirth.

Often an indication of your need to stir your creative juices, the black widow spider represents and encourages us to take control of our current situation and to free ourselves from the pain of the past for it is the only way that we can move forward in life.

Known for inspiring mystery and elegance, finding these cautious yet awfully dangerous creatures in your path could be a reminder of your need for a little secrecy and discretion for you may be unfolding or revealing more than what you should. It could also be pointing out your own abilities and that you are skillful enough to take the creative steps you need to trap and seize your dreams.

Also check our post: Spiritual Meaning of Spiders in House

The symbolism in other cultures

The black widow spider has a rich symbolism in many different cultures. In some cultures, the black widow is seen as a symbol of fertility and rebirth. They are often considered to be lucky symbols, and they are sometimes used in spells and rituals intended to bring good luck.

In other cultures, the black widow spider is seen as a symbol of death and danger. They are associated with transformation, especially the transformation into death. Some people believe that the bite of a black widow can cause someone to die within hours or days. This dark symbolism gives the black widow its dangerous reputation.

In many ancient cultures, spiders have a connection to weaving. According to the belief of some historians, people were inspired to prepare fishing nets. It was possible after people watched spiders weave the webs.

In ancient Greece, spiders were believed to be the weavers of destiny. They were said to weave the webs that would catch people’s lives. This is where the Black Widow gets her name from in Greek mythology.

Despite its deadly venom, the black widow spider has become one of the most popular symbols in modern culture. Black widow tattoos are popular among both men and women, and black widow motifs can be seen in a variety of different media.

The black widow spider is often used as a symbol of strength and power. This is due to its deadly venom and the fact that it is able to survive in some of the harshest environments on Earth. They are also considered to be beautiful creatures, which adds to their appeal as symbols.

Especially in the overly popular Marvel comics and movies, the black widow has become one of the most popular symbols in recent years. The character of Black Widow, played by Scarlett Johansson, is a skilled fighter and strategist who is able to hold her own against some of the most powerful characters in the Marvel universe.

In Celtic mythology, the Black Widow is a mythical spider and a creature that is half-human and half-spider. This creature is said to be able to spin webs of magic and can seduce anyone who looks into its eyes (check also the spider’s web symbolism).

In Christianity, the black widow is often seen as a symbol of temptation and sin. They are said to be able to lure men into their webs with their beauty and then kill them. This dark symbolism has led to the Black Widow being seen as a dangerous creature in Christian mythology.

The Black Widow spider is often seen as a spirit animal or totem. This is due to its ability to survive in harsh conditions and its reputation as a deadly predator. Black widows are also considered to be symbols of transformation, which makes them powerful totems for those who are looking to make changes in their lives.

If the black widow is your spirit animal or totem, you may be drawn to the dark and dangerous aspects of life. You may also have a strong survival instinct, and you may be able to thrive in difficult environments.

Contrary to what many of us believe, dreams are often a representation of our present conditions. Treacherous and tricky, seeing a black widow in your dream could coincidentally mean that a woman in your life has been deceitful. The black widow spider’s out-of-this-world trait of consuming their mate after they fool around could mean that you are engaging in a particularly unhealthy activity and that you should immediately stop.

If you find yourself seeing from the black widow’s point of view, it signifies that you might be a hazard to others and you need to take a good look at the changes that you can apply to yourself for you to cease being a cause of pain and spiritual death.

Since the black widow has the power to get everyone that crosses its path creeped out while they are wide awake, then dreaming of them symbolizes fear, cruelty, manipulation, and deceit. While it could also imply the misunderstandings that we have between our friends and family members, seeing your image as you kill this ominous creature means that you have regained the fondness and trust of those who have made your waking life a nightmare.

As it represents your victory over your fears and insecurities, the death of the black widow in your dream shows that you are finally free from such dark entrapments and that you can now live in peace and harmony.

As they would most probably spend the rest of their existence with a fierce reputation, learning about these remarkable spiders’ symbolism allows us to better understand that these calm loners would only let loose their poison after exhausting all of their defensive options. Crawling into our lives with messages of freedom, vision, self-sufficiency, and stability, the black widow spider is no doubt more than just its fearsome appearance and venomous spider bites.