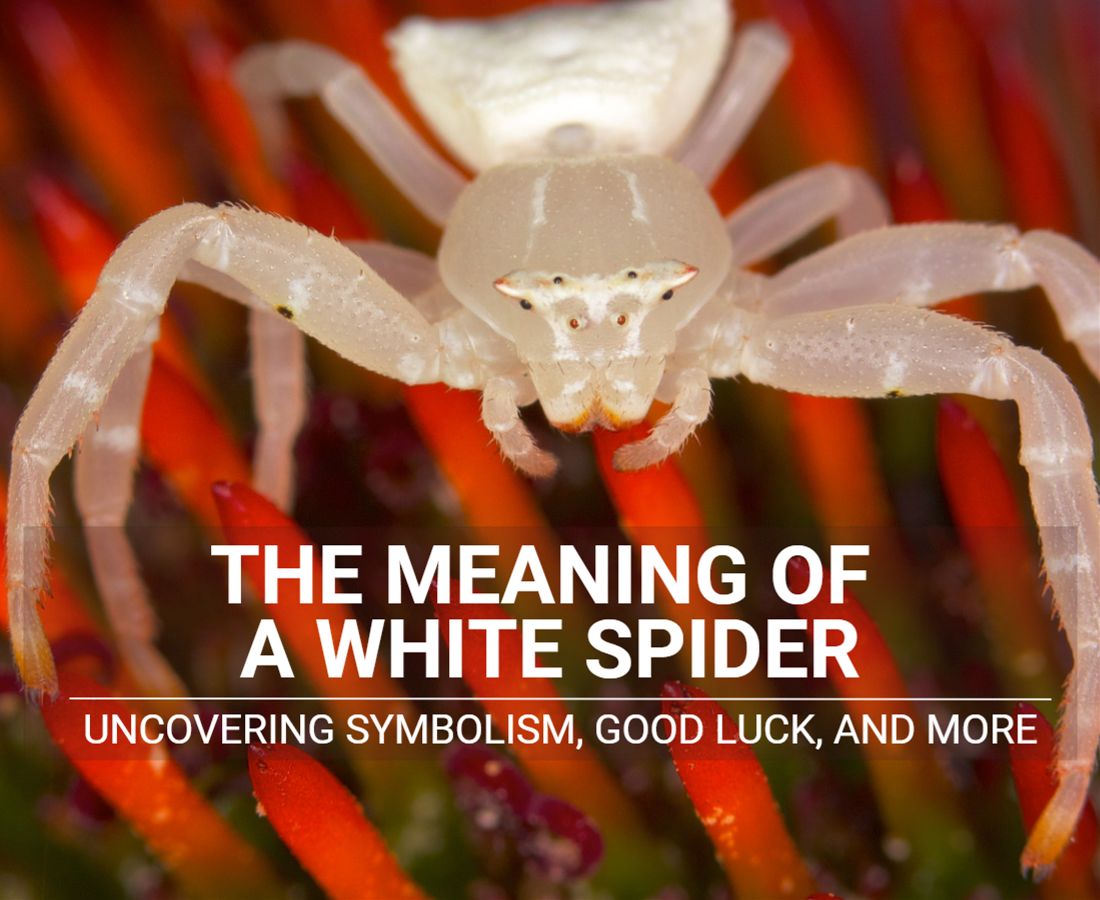 Spiders have been crawling the planet for an astonishing 380 million years! While they often get a bad rap in Western culture, spiders are viewed differently elsewhere. For centuries people from around the globe have developed proverbs about them.

Spiders are creepy and captivating creatures with unique skills and characteristics. Whether you see them as creative critters that motivate us to work hard and aspire for progress or bad bugs used to call upon evil forces, let’s wriggle into the spiritual meaning of a white spider.

“The spider and the fly can’t make a deal.”

What does a white spider symbolize?

White spiders, known for weaving intricate webs on which to lay and keep eggs, are recognized as a powerful symbol of purity, fortune, and feminine strength. From inspiring us to hone our skills to provide us with ancient knowledge, here’s what the presence of a white spider tells us.

Apart from their long legs, numerous eyes, and sometimes hairy appearance, spiders are almost always synonymous with their webs. Since they are often found weaving a home in the most advantageous places, the presence of a white spider is known to awaken our creative juices. They remind us how our imagination can be playful, and our hands can be useful.

Creating a web that can serve as a trap, a home, and a nest is a lot of work. The white spider’s ability to endure constant breakage and willingness to recreate its web many times over makes it a potent symbol of patience. Because we live in an age when we can obtain almost anything instantly, they teach us the importance of self-control and how good things come to those who wait.

Perhaps because they rank among the oldest creatures on the planet, many view white spiders as carriers of ancient knowledge and wisdom. They share their open-mindedness and ability to be more understanding of others. Although they give us a higher level of awareness than our peers, they teach us to use this gift to guide others toward the path of righteousness.

White spiders have been revered for centuries as symbols of femininity, signifying patience, creativity, and a nurturing presence. Seen as beacons to intuitive wisdom, their resilience symbolizes the strength and endurance inherent in women – echoing long-held beliefs about Goddesses being guardians of protection through spiritual guidance.

The ability to create and weave intricate webs, and the willingness to rebuild them, is a metaphor for the potential of abundance and fertility that lies within us all.

The presence of white spiders is often viewed as a sign of good luck and fortune across many cultures, representing the idea that positive changes are coming. Furthermore, these elegant critters can represent prosperity in life – both financially and emotionally – along with healthiness and happiness!

Moreover, they remind us to stay determined when times get tough; their skillful ability to rebuild webs shows resilience no matter what obstacles come our way.

Weaving the threads of destiny

White spiders offer a unique perspective on life, reminding us to trust the path that has been set before us and have faith in the journey. The meaning of a white spider represents destiny woven into intricate webs of fate; by seeing them we can be reminded that despite our best efforts sometimes things happen for mysterious reasons beyond our control. It is an encouraging reminder to let go and embrace life’s flow!

The white spider’s dark side

White spiders are often seen as mysterious and fascinating, but they also come with a fair share of superstition. Often they are associated with mystery, the unknown, and the shadow self.

While myths suggest that these arachnids can predict death or bring bad luck to their encounters, the reality is far less sinister; most spider bites from even the more venomous species don’t result in serious harm.

So if you ever find yourself staring face-to-face with one of nature’s eight-legged wonders, remember: it just wants to go about living like any other creature!

Regardless of where you live in the world, studies suggest that a spider is always just about 10 feet from us. Here are some of the messages the white spider tries to communicate in various cultures worldwide.

A popular creation figure told in the many myths and folklore of the Native American tribes, the Spider Woman is believed to be the source of all life on the planet. Often referred to as the Spider Grandmother, legend tells us that she creates a great interconnected web that promotes unity among the world’s nations. Like the white spider, the Spider Woman represents the creative feminine energy that brings prosperity and good fortune.

A list of ancient cultures associated the development of fishing nets and woven fabrics with spiders. As one Greek myth tells us, a beautiful young woman named Arachne was highly skilled in weaving, and most people compared her talent to that of the goddess of weaving, Athena.

Upon hearing this, the goddess challenged Arachne to a weaving contest. Even Athena admitted that Arachne’s tapestry was superior to hers. However, out of jealousy, Athena cursed the girl. She turned her and all her descendants to hang from threads for all eternity as skilled weavers.

The Jorogumo of Japan

Out of the countless mythical creatures in Japan, the legend of the Jorogumo stands as one of the most popular. Illustrated as a giant spider that can shapeshift into a beautiful woman, it was feared and despised by the ancient Japanese for its fondness for deceiving and devouring young men. These intelligent yet cruel creatures are believed to be excellent at having conversations, which they use to seduce those filled with lust.

Various cultures believe that the white spider spirit animal brings forth optimal health, confidence, and good fortune. By teaching us about the importance of simplicity, these creatures urge us to think in less complicated ways, for it often leads to a more peaceful and tranquil life.

A spirit animal that symbolizes purity, the meaning of a white spider inspires us to welcome and embrace a more minimalist and uncluttered existence. Many cultures believe that they enable us to see things from a higher perspective and help us eliminate negative thoughts that hamper our spiritual growth.

The white spider totem animal is a profound totem and good example of a spiritual insect meaning, inspiring us to craft our destiny. It symbolizes patience and persistence – gentle reminders that we should have faith in the path of life.

The strength of this animal encourages us to persevere through challenges; just like how spiders build their webs with steadfastness, so can we manifest our reality by staying focused and determined in whatever it is that holds true passion for us.

If you found a spider in your house read our post. Also, read our post: a) Spider Web Symbolism: What It Means For You? and b) Spider Symbolism, Totem, And Spirit Animal