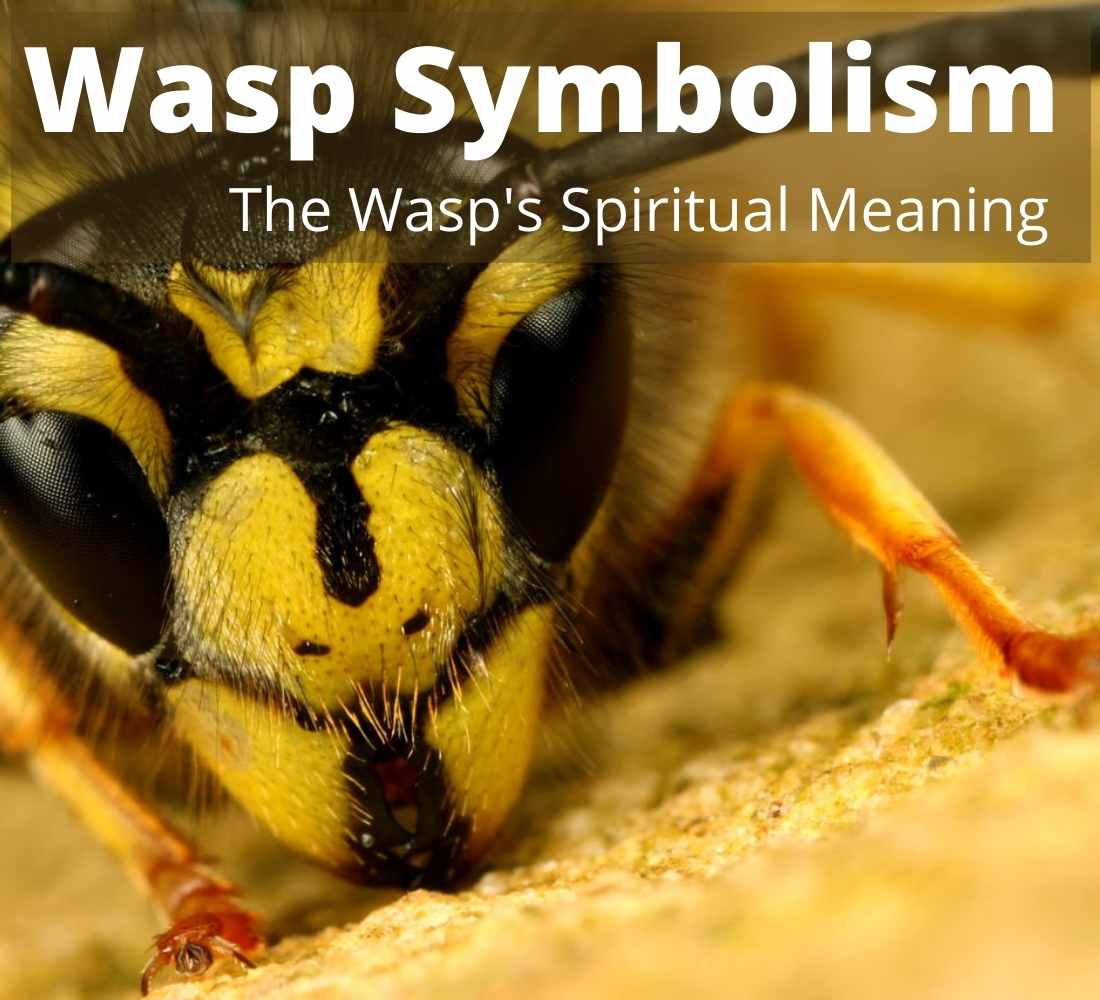 Despite the fear that they can stir in our gardens, wasps are known to be highly beneficial to humans. Consisting of about 30,000 recognized species, these menacing buzzers that function at their best when in solitary evoke significant symbolisms that can positively influence our lives. Often spotted spiraling around in their striking bright colors, they often emerge in the spring which naturally makes them a common indication of new beginnings. As we are more familiar with the alarming humming sound and the threat of painful stings that they bring, let’s nestle down and learn more about the wasp symbolism and spiritual meaning.

What does a wasp mean spiritually?

Perhaps because of the unsettling buzz and the painful stings that they can leave on our skin, the wasp is not on top of the list among the most popular spirit animals. As a variety of cultures see these insects as a symbol of control over your life circumstances, a wasp that flies into your presence is a reminder that your goals can only be realized if you infuse diligence and perseverance into your dreams. Signifying order, evolution, productivity, and progress, these vigorous insects are known to bring about wonderful and fascinating changes as you flutter into a fresh start.

While it may be quite difficult to trust a bug as unpredictable as a wasp, these insects convey positive spiritual messages that may help us lead a more meaningful and productive life. Casually flying into your consciousness, the wasp stimulates us to remain steadfast about the unexpected changes that are about to happen and that we should be ready to grab any opportunity for a new beginning. Known for their amazing capacity to create nests with intricate architectures, they help awaken our aptness in staying focused and organized which may lead to the fulfillment of our goals.

A popular representation of productivity for their association with spring and their role in the fertilization of flowers, a wasp encourages us to stay passionate and to always look for the positive side of things much like the way they seek that pollen that allows the true beauty of plants to blossom. Arriving at a time when all the changes are a struggle, these unfavorably famous bugs would often fly in to ignite your inner strength, giving you the courage and spirit to fearlessly take on the world. Since they are mostly inactive during the winter, they represent rebirth and the changing of the seasons which tells us that days of fertility and abundance are on the horizon.

Highly revered for their diligence, wasps are well-known symbols of efficiency, development, and productivity. Not only do these creative and energetic bugs swoop in to motivate us to keep working hard towards our goals, but they also instill in us the firmness to never let anything get in our way. Serving as a reminder that resistance to change can lead to adverse effects, these somewhat troublesome insects signify that achieving your goals is always a possibility as long as you apply the right amount of dedication, action, and desire.

Respected for being amazing workers and over-protective parents, they glide past our paths as a hint of the importance of a happy and meaningful personal life. As most wasp stings take place in defense against threats to their nests, it shows the importance of protecting those who are most dear to us. By exhibiting awesome speed and proficiency in building nests, an encounter with a wasp indicates that the fresh start that you have been longing for will undoubtedly be solid, satisfying, and pleasant.

Legend has it that the invention of paper was inspired by the activity of wasps around 2,000 years ago. With their innate ability to skillfully build a nest out of paper from fine specks of chewed-up wood it collects from its mouth, people with wasps as their totem animal are often advanced with their ideas. Generally resourceful and brilliant, these creatures that are usually seen gliding playfully possess the natural ability to ignite life into any party. Fun yet still very capable of being serious, wasps are courageous enough to challenge relationships and personalities that they do not trust and they won’t hold back in case some sort of stinging is required.

Known as control freaks, these totem animals get exceedingly uncomfortable when people move objects around the nest without letting them know first. As such discomfort provokes the wasp to create some irritation of their own and being able to get past such annoyance, stress, and transitions allow the true potential of this wonderful creature to shine.

Those who have the wasp totem can expect some challenging times in their lives. This creature is a symbol of hard work, determination, and perseverance. The wasp teaches us that we can achieve anything if we put our minds to it- even if it means facing difficult obstacles along the way!

The wasp is also a sign of change, transformation, and new beginnings. If this creature appears in your life, be prepared for big changes ahead- these could be positive or negative, depending on how you approach them. In either case, the wasp totem reminds us that nothing ever stays the same and we must always be ready to adapt to changing circumstances.

Spiritual meaning of wasp in your house

Since only, the newly mated queens survive the period of hibernation, and due to their connection to fertility and pollination, wasps have long been viewed as a symbol of endurance, renewal, and change. Identified as creatures that promote passion, structure, harmony, communication, and effectivity, a wasp that shows up in your house is an indication for you and the members of your household to appreciate and embrace the importance of communal living. It may also mean that you currently lack the boldness and courage of facing the challenges that are about to take place in your life.

While the wasp is at its most productive and efficient when it’s working on its own, they are known as very social creatures that use special means to communicate with their family. Its swift and unexpected appearance could be a message for our need to express ourselves more clearly and to consider our relationships at home.

What does it mean to dream of wasps?

If you dream of seeing a wasp in your home, it means that someone will come into your life and help with some sort of problem or issue. You can expect support from this person soon.

Dreaming about getting attacked by wasps means that you will be involved in a conflict with people who are very close to you. This might lead to problems and issues within your family or home life.

If the dream about seeing wasps outside means that trouble is coming, even though we might not expect it. In this case, take care of yourself! If there is one particular area where these insects appear, then we must pay attention to what happens around us; otherwise, we could experience many unpleasant situations because of our ignorance and negligence while dealing with others. For example: getting stung by a small insect could symbolize an upcoming disease or another kind of health complication that can affect us and those closest to us (such as children).

The Wasp symbolism in different cultures

The Wasp symbolism in different cultures varies depending on the region. In North America, for example, it is generally seen as a pest and nuisance. However, in China, the wasp is considered to be a symbol of wisdom. Similarly, in some Native American tribes, the wasp is associated with feminine energy and healing properties.

In Europe, wasps are often regarded as symbols of bad luck or death. Some believe that if a wasp enters your home it means that someone close to you will die soon. There are also many folk tales about stingers being able to steal human breath or blood!

Both viewed the wasp as a symbol of feminine power and regeneration. It is also said to bring happiness, joy, and inspiration to those who dream about it!

In some Native American tribes, the wasp is associated with feminine energy and healing properties. It is also a symbol of the Sun, as it appears in the sky every day- just like our closest star does!

For them, the wasp totem is not only the creator of our Earth but also a creature that symbolizes productivity and categorization. Some tribes believe that the wasp gives us the ability to be observant, critical, and ready for change.

In Asian cultures, wasps are often regarded as symbols of bad luck or death. Some believe that if a wasp enters your home it means that someone close to you will die soon. There are also many folk tales about stingers being able to steal human breath or blood! In some regions, however, this insect represents wisdom and happiness!

Also in Asia, this creature is considered to be one of the signs that mark summer’s end (fall). It means that autumn has begun and winter will follow soon after- so make sure you prepare for what lies ahead by storing enough food and firewood before the weather gets too cold!

No doubt, most people will jump off their chairs and freak out each time they see and hear wasps, and understandably so. However, unmasking the symbolic meaning of this captivating creature not only eliminates our fear of these insects but offers new insight into the lessons that this bug brings as well. As encounters with wasps can be both terrifying and painful if you are not careful, we just proved that this spirit animal can do far more good to us than harm.

We also wrote about the bee’s spiritual meaning, hornet symbolism, or, in our epic post, the insect symbolism.