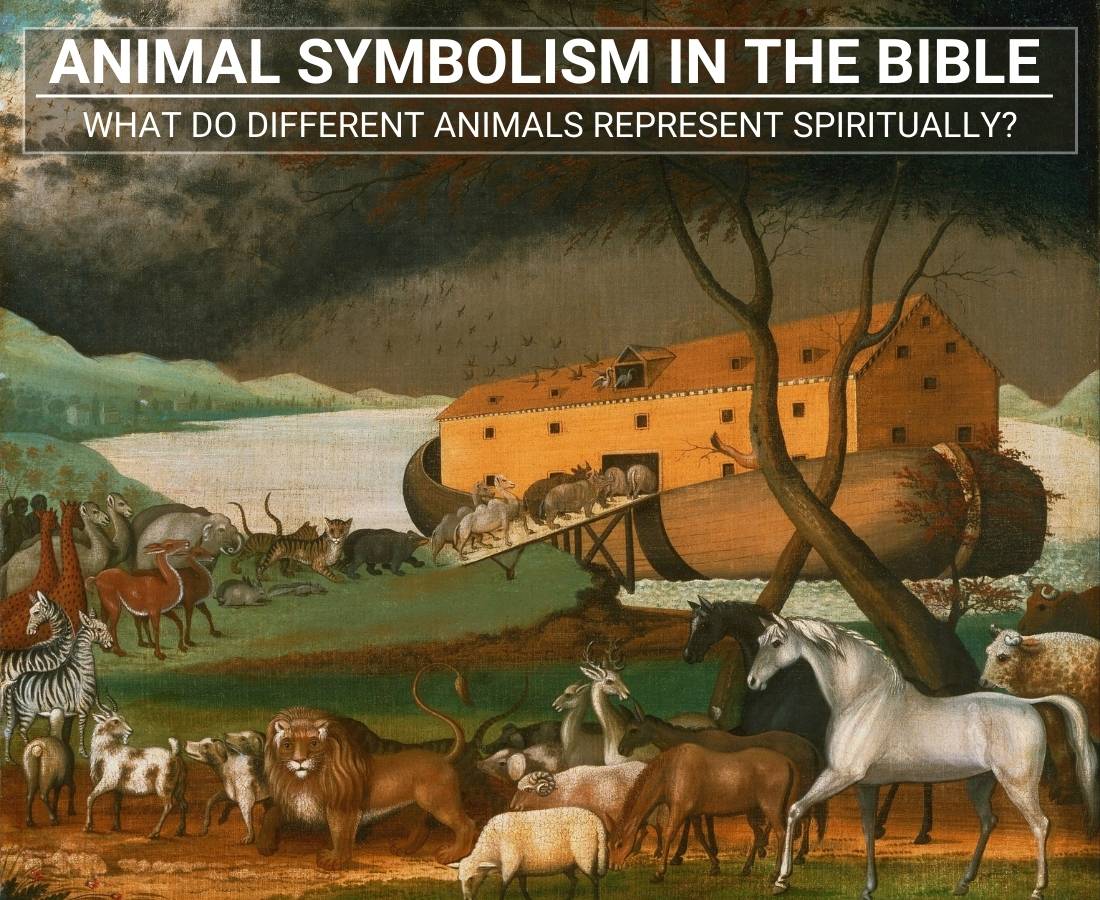 Animal Symbolism In The Bible: How These Creatures Teach The Oldest Tricks In The Book

While it is highly understandable to find bears, monkeys, and panthers in the Jungle Book, coming across a host of animals including lions, cheetahs, and hyenas in the Bible simply blows our minds. As those who put the Holy Scripture together made a lot of colorful references to countless creatures, it indicates how creative God really is as He used animals to reveal His will and ideals for man.

From all those creatures in Noah’s ark and the lions that didn’t have a taste for Daniel to the whale that eagerly swallowed Jonah, let’s stampede into some of the most interesting animal symbolism in the Bible.

Apart from forever holding the honor of being the first bird ever mentioned in the Bible, the raven, with its often ominous features, holds contrasting biblical symbolism. While a verse tells us how these relatively aggressive birds would pluck our eyes out if we turn sinful, the story of Elijah being fed ravens represents how God constantly protects and provides for us.

Read more about the raven symbolism

Known to have played a key role in Noah’s immortality, doves will eternally be remembered for carrying back a leaf to show that there is hope for their master and his family. Known to have once physically represented the Holy Spirit, these gentle creatures have long been held to bring us peace and comfort, as well as commitment, faith, and hope.

Regarded as a vision of courage, power, and royalty, the Bible used the image of an eagle to inspire us to live honorably and to give us the courage to go on with our spiritual journey. Admired for their ability to carry their young on their wings, these strong creatures remind us how God carried Israel out of Egypt and how He continues to lift us from our difficulties and hardships.

Perhaps because of their ferociousness, strength, and acquired taste for sinners, the Bible tells us how God would, at times, use the king of the jungle to punish wickedness and disobedience. Christ is sometimes referred to as the Lion of Judah, who fearlessly stands up against the Devil and whose suffering has saved us from temptations, fear, death, and sin.

Mainly used for war and transport during Biblical times, horses were seen as creatures of destruction and chaos that owned the ability to carry the very devastation of mankind on their backs. The ride of choice of the Four Horsemen of the Apocalypse, they are perceived throughout history as harbingers of death, war, conquest, and famine.

Considered a worrisome figure in various cultures, the horse struts in with the promise of salvation to those who thrive in love, mercy, and compassion.

Long before they played sidekick to a popular cartoon character, the donkey made some significant appearances in the Bible. From being the creature that Joseph trusted to carry Mary to Bethlehem to becoming Jesus’ transport of choice on His return to Jerusalem, these hardworking creatures were described as symbols of graciousness, humility, and peace.

Considered during those times as a lowly beast of burden, its impressive resume has led many to hold them in high reverence.

Read more about the donkey symbolism

While often given the role of the helpless victim in a handful of Bible stories, the sheep is viewed by the church as one of the faith’s most critical images. Frequently depicted as defenseless and meek, these naturally shy creatures are often used to represent Christ’s followers and Jesus as their protector and guardian.

One parable tells how a shepherd would search high and low for his lost sheep, indicating how God continues to seek out those who stray from His path.

The sheep and its symbolism

Known to possess a more inquisitive and aggressive nature, goats are seen in much lower light than sheep. Since they tend to display dominance towards the other members of their herd, many of us see these bearded creatures as a representation of the Devil and the occult.

The goat’s habit of flaunting its supremacy over others does not agree with the church’s teaching of humility and compassion.

Throughout history, the Israelites have acknowledged the lamb as a symbol of gentleness and innocence. While various animals, including rams, doves, and goats, were also used as a sacrifice, the natural meekness and purity of a lamb have made it the offering that is most pleasing to God.

The church sees the lamb as Jesus, who offered himself as the perfect sacrifice to die on the cross and, as mentioned in the Holy Mass, “take away the sins of the world.”

Once regarded in the scriptures as the most unclean of all animals, the pig is commonly associated with gluttony, laziness, and greed. Recognized as the most unintelligent creature at that time, they were often used to refer to Gentiles who were considered to belong to that period’s lowest caste.

As the Bible tells us, even Jesus said to not “cast your pearls before swine, lest they trample them under their feet, and turn and tear you in pieces” (Matthew 7:6). This indicates those who have heard the Gospel yet choose to reject it.

While dogs these days enjoy the title of “Man’s Bestfriend,” things were a little different during the time of the Old Testament. Identified as rabid scavengers who were often sent after sinners to tear and devour, they were often an image of gluttony and were never spoken of in a positive light.

With their predatory behavior highlighted more than the friendly and adorable pets that they are today, the Bible tells us how the dog’s image has gone a long way.

Spiritual meaning of the dog

Traditionally used for plowing and transport, cattle in biblical times were a sign of affluence and were seen as an important status symbol. While their meat was considered a delicacy that was served only at royal banquets, the Bible associates their image with extravagance and richness. Known to be among the first domesticated animals, their ability to give both meat and milk signifies God’s ability to provide us with physical and spiritual nourishment.

Although it may sound a lot like a Disney movie, the story of Jonah and the whale is perhaps among the most loved by both children and adults. According to the scriptures, God sent a big whale to swallow Jonah and keep him from drowning. While trapped in the belly of the fish for three days and three nights, Jonah prayed, repented, praised, and thanked God regardless of the difficulty of his mission and plight. The whale indicates how God will never let us sink deep, no matter how sinful and unforgiving we think we have been.

Except for the whale, the scripture never mentioned a specific fish by its type or name. However, Jesus used these water-dwelling individuals a handful of times to inspire and enlighten early Christians about His earthly mission.

His work where He fed thousands from a pair of fish and his invitation to “Follow Me, and I will make you fishers of men.” (Matthew 4:19) proves God’s providence and Christianity’s responsibility of bringing people to heaven as well as the animal symbolism in the bible.

No story would ever be complete without a little twisssst and some interesting conflictssss. Known to have executed the world’s most popular form of deception, the serpent represents evil, death, and destruction in the Christian tradition. Instigating the fall of man by tricking Eve into going against God’s command, there is no doubt that these otherwise calm and intelligent creatures will be abhorred in the Bible for a long, long time.