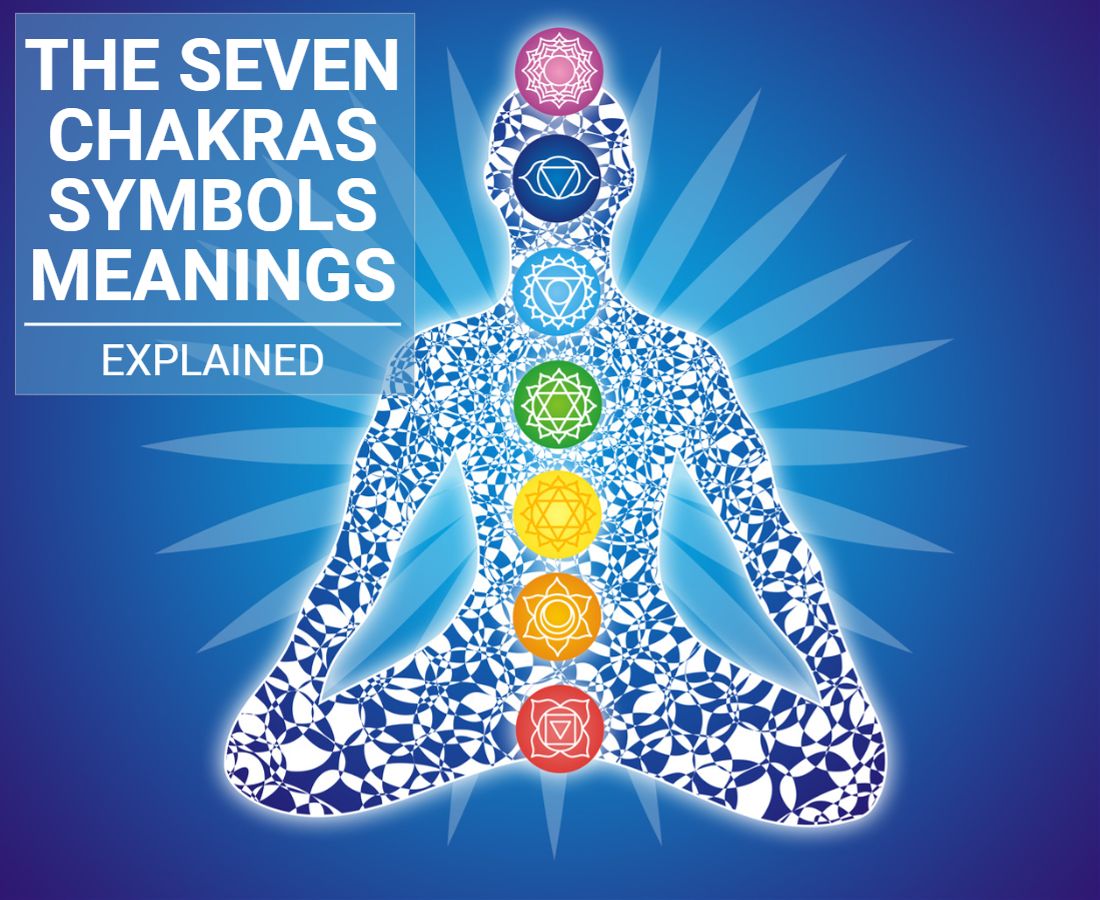 Our body consists of two parts – the physical part ( which we can see, touch, and feel) and the energetic or astral body. Energy vortexes in our body that radiate different vibrations are called the “Chakras.”

In this blog post, we will delve deeper into the symbols representing our body’s energy centers, and the specific colors associated with each . We will also explore the system in greater detail.

But before we dive straight into the symbols and colors, it’s a great idea to have a quick overview of what chakras really are.

“Chakra” is a Sanskrit word that literally means “a wheel”. These energy vortexes are called chakras because, like a wheel, they spin and produce vibrations that help our body with its psychological and spiritual balance.

There are 7 chakras located in the body, starting from the base of the spine to the very top of the head. When these chakras are in balance, they promote health (mental and physical) and vitality in the body (see also our post: why chakra balancing is important).

But imbalanced chakras can lead to psychological problems, which eventually take the form of a physical ailment.

“There’s no question that the mind-body connection is real, even if we can’t quantify it. Hope is one of the greatest weapons we have to fight disease.”

Symbols of the Chakras and the Meanings

Each in our body is represented by a specific symbol that denotes each energy center’s qualities and function. The shapes of the elements in the chakras usually consist of geometrical shapes like squares, triangles, and circles.

One important element in all chakra symbols is the Lotus flower.

Lotus is a sacred flower in Hinduism (the religion which introduced the system). The Lotus flowers often grow in muddy waters and symbolize resilience, strength, and birth. The lotus depicts that beautiful things can take form and thrive amidst chaos and horror.

Another common element in the symbols is the circle. The circle represents continuity and connection and hints at our undeniable bond with the divine energy that encompasses the universe. The symbols can be seen as sacred geometry symbols for healing.

The root , also called the “Muladhara,” is located near the base of the spine. This has a feisty red color which represents courage and safety. Red is also a color that depicts zest and passion for life.

This is associated with our core needs — safety and survival. It is also responsible for keeping us grounded and connected to the earth. So, a balanced root gives us feelings of being safe and strongly connecting with mother nature.

The symbol for this is a lotus flower with four petals; a square and an inverted triangle. The four petals of the lotus represent:

The square inside the petal represents grounding and stability. The four corners of the square are in congruence with the four petals of the lotus, and they again reinforce the idea of four foundational pillars of consciousness.

An inverted triangle in the middle of this symbol signifies this ’s connection with the earth and its powerful healing energies.

“Program your life the way you want it to be: don’t waste the unused energy that lodges in the matrix of your soul. You are transcendent, be a superintendent.”

The Sacral also called the “Svadhishthana,” lies just below the navel. The color of this energy center is orange, symbolizing optimism, energy, and creativity.

This controls and regulates one’s sexual pleasures, creative expression, and desires. A perfectly aligned sacral manifests as you feeling good about yourself and being passionate about your creative pursuits.

The symbol for this is a lotus flower consisting of six petals. The six petals of the lotus flower represent Pride, Desire, Anger, Jealousy, Cruelty, and Hatred. The lotus signifies that these (negative) traits must be controlled, eliminated, and replaced with positive, divine traits of love, fulfillment, joy, faith, and compassion.

The circle inside the petals represents the ever-continuing cycle of birth-death-rebirth. The circle is also often associated with water, which means movement and fluidity.

The crescent moon inside the circle symbolizes a variety of things:

The Solar Plexus , also called the “Manipura” , lies around the stomach area, just below the rib cage. The color of this is a bright yellow referring to energy, happiness, and self-esteem.

This is the source of your self-esteem, inner wisdom, and personal power. When this is in harmony, you will likely feel in control of things and feel joyful about life.

The symbol for this energy center is a yellow lotus with ten petals. The ten petals of the lotus refer to the ten pranas. Prana is the life force — the energy which creates everything and flows through every particle in this universe. In Chinese wisdom, this life force energy is called“Chi”.

The inverted triangle represents energy rising from the lower chakras to the higher chakras in the body. This is also called “kundalini” energy.

The Heart is also called the “Anatha” in Sanskrit. This lies right in the middle of the chest and is represented by the color green. Green is the color of beginnings, growth, and transformation.

The heart regulates your emotions and is the connecting point between the lower three chakras and the higher ones. That is why the heart is also called the center of transformation.

The symbol of this is a lotus with twelve petals that represent the divine qualities of the heart.

The circle inside the petals represents the continuous cycle of life and death and rebirth. It also shows the link between the body and the cosmos, both are one and the same.

The six-pointed star inside the circle symbolizes divine masculine and feminine energies coming together and merging to amplify the energy needed for transformation.

The fifth energy center in the body is also known as the “Vishuddha.” This emits blue color. The color blue is associated with the ocean and symbolizes freedom, openness, and inspiration.

This is associated with themes of self-expression and finding your voice. With a balanced throat , you can expect great communication skills and the ability to fully express your ideas without fearing being judged by others.

The symbol of this consists of a lotus with sixteen petals. These petals are a representation of the sixteen vowels of the Sanskrit language. Inside the lotus again lies an inverted triangle signifying energy accumulation from the lower three centers and shifting upwards to the higher chakras.

Right in the middle of the triangle lies a circle representing a calm, detached, and pure mind. The “Ajna,” or the Third Eye , is the most revered and celebrated energy center. This powerful denotes intuition, and the color indigo represents it. Indigo is the color of deep inner wisdom and strong intuition.

The symbol of this is a two-petalled lotus flower. The two petals indicate the duality between God and self.

The inverted triangle represents the activation of the pineal gland (often regarded as the portal to higher dimensions). Once your pineal gland is activated, it can elevate your mind and awareness to higher realms that are not perceivable at lower levels of consciousness.

“There is deep wisdom within our very flesh if we can only come to our senses and feel it.”

The seventh in our astral (energetic) body is the “Sahasrara.” It is associated with the color violet which is a color of devotion, peace, and grandeur.

This symbolizes your spiritual connection and communion with God. A balanced crown helps you access states of wholeness and transcendence.

Its symbol is a lotus with thousand petals. The thousands of lotus flower petals represent our union with the divine energy behind every physical form. It also indicates the infinite nature of our connection with the universal mind.

In case you’re interested, we have a post specifically about the crown : herbs for crown chakra healing. Also, there are chakras in your hands too, check them out.