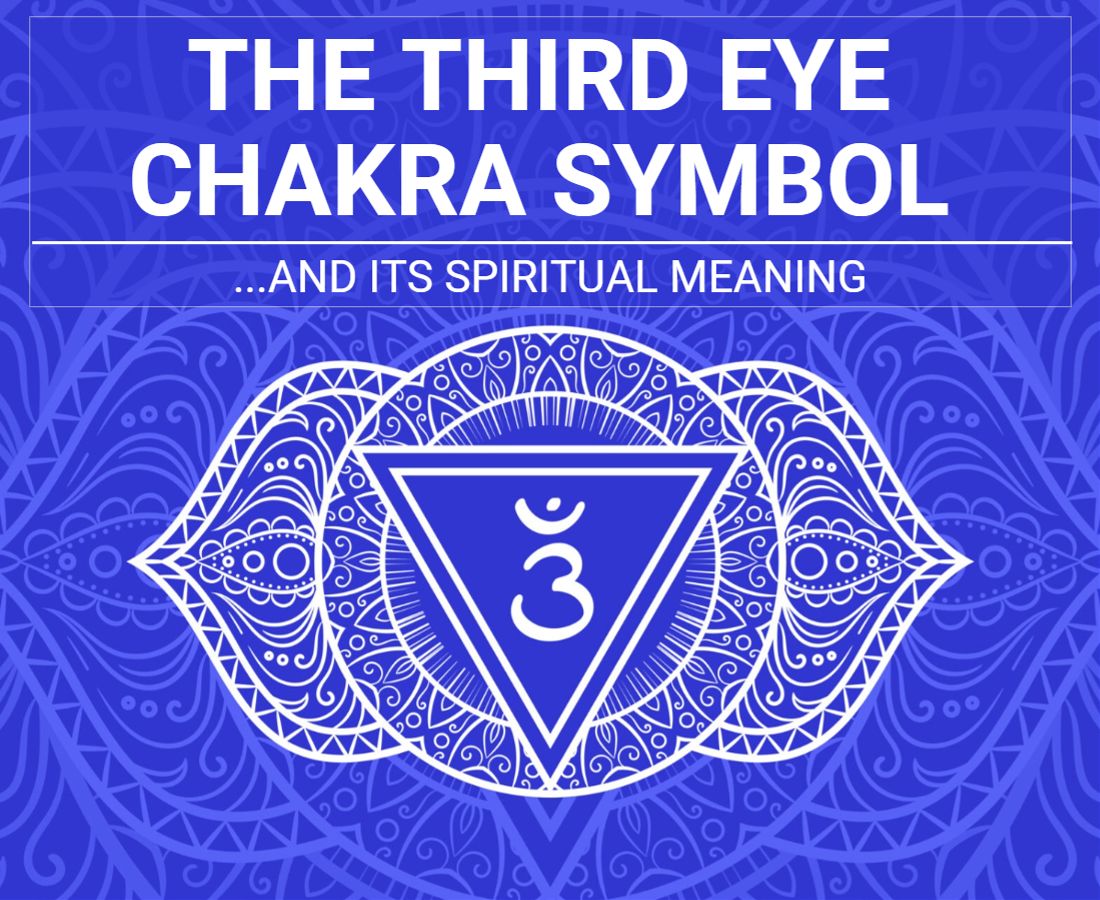 One of the seven major chakras is the third eye (Ajna  in Sanskrit). The third eye exists at the center of your intuition, senses, and how you obtain wisdom.  It is your portal to step beyond duality and take control of your reality.

You may experience headaches, blurred vision, or fatigue if the third eye is out of balance. You may experience feelings of “spacing out” or being disconnected from reality. Also, you might find it challenging to focus on something for an extended period of time.

In this article, you’ll learn about what this powerful symbol represents and how it can empower your life.

The color associated with the of the third eye

The meaning of the symbol of the Ajna

The symbol of the third eye depicts an eye surrounded by an inverted triangle. This is symbolic of seeing beyond the duality of reality and understanding that there are more than two sides to any issue. The triangle also represents the ability to reach higher states of consciousness, while the eye symbolizes clear insight and vision.

One interpretation is that the two petals symbolize the manifested and unmanifested aspects of the mind, or the conscious mind and the subconscious mind. When these two forces are balanced, you gain greater awareness and a heightened sense of intuition.

The two petals also represent the nadis, which are channels within the body which energy flows through. Idas and Pingala are two nadis that are associated with the third eye, which combines two streams of energy, forming a single stream of consciousness that travels up into the crown.

The third eye symbol is often associated with Shiva, the Hindu god of destruction. In Hinduism, Shiva is said to be the originator of the third eye and its power – the ability to see beyond physical reality.

The element linked to the third eye

The element of light is associated with the third eye , and its energy assists us in seeing clearly both physically and spiritually.

If you want to gain clarity and wisdom, opening your third eye can help. It serves as the hub of consciousness, perception, and intuition. This energy center can be found in the center of your forehead, just above your brows. It is associated with intuition, insight, and abilities.

A blocked third eye can cause issues with your sight, both physically and metaphorically. You may have difficulty distinguishing between truth and illusion.

It may also be difficult for you to trust your intuition or follow your gut instinct. Fortunately, there are numerous methods for opening and balancing your third eye .

Yoga and meditation are two well-known techniques. Try visualizations or affirmations as well. Wear purple or use crystals like amethyst or sodalite if you want something more physical.

The third eye is located where the left and right hemispheres of the brain converge, and it is related to finding a balance between our creative and analytical minds. The mind’s eye is the spiritual body. Clear seeing, or clairvoyance, happens through this .

The Third Eye is occasionally referred to as “the seed of the soul.” It’s the place where a deeper universal understanding meets our capacity to see within ourselves and others.

CHAKRA HEALING COURSE: the best on the internet! Have you been looking for a way to unlock your hidden potential? Investing in yourself can be one of the best experiences, and Mindvalley's Chakra Healing Course by Anodea Judith is here to make it happen.

﻿We've taken the course ourselves and want to give an honest review on its worthiness so that you know exactly what you're getting into before taking this transformative journey!

Meditation is associated with the third eye

The third eye has long been associated with meditation and the mystical world. It is thought to be the seat of your spiritual consciousness, as well as the source of your intuition and a higher level of comprehension.

When you meditate, your third eye is said to open, allowing you to connect to a higher power, or something outside of yourself, gaining insight and clarity over your life. The pineal gland, a small, pea-sized gland located in the center of your brain, is also linked to the third eye.

Melatonin, which regulates your sleep cycle, is produced by this gland. It is thought that when you meditate, you stimulate your pineal gland and increase its production of melatonin, which can help you relax and fall asleep faster.

What can cause a third eye blockage?

A variety of factors can cause a blockage in the third eye . Stress, anxiety, worry, doubt, and fear are some of the most common causes.

You may focus on the negative aspects of your life when you are stressed, anxious, or afraid. When you experience these emotions, they can cause a blockage in the third eye .

This is because our emotions impair our ability to see clearly. This can make it difficult to notice the good things going on around you. Other aspects that manifest are indecisiveness, confusion, lack of focus and purpose, or depression.

If you are having difficulty seeing clearly, it could be due to a blockage in your third eye . There are several ways to clear this and improve your vision. One method is to practice meditation on a regular basis.

When your third eye is overactive, you may experience signs of being overly analytical and abstract. You might also have vivid dreams that are hard to interpret or nightmares.

Excessive daydreaming can be a sign of an overactive third-eye as well. You could also find yourself feeling lost in a sea of information, unable to discern what is true and what is false.

In severe cases, this can also lead to hallucinations and complete dissociation from the real world.

If your third eye is overactive, you can try calming activities such as yoga or meditation. You can also practice grounding exercises like walking barefoot on the earth or breathing deeply and slowly. Wear dark blue clothing or keep a piece of amethyst on your person to help balance your energy.

By recognizing the signs of an overactive third eye and performing simple exercises, you can help bring it back into balance. When this energy center is in balance, you will have a clear vision and enhanced intuition.  You will also be better able to trust yourself and your decisions. By balancing your third eye , you can gain insight and clarity about yourself and the world around you.

When your third eye is underactive, you may have difficulty seeing the bigger picture. You may be unable to trust your own intuition or make decisions based on your inner knowing. You can also have trouble discerning truth from fiction and reality from illusion.

To help balance an underactive third eye , practice yoga postures that stimulate your forehead and temples. You can also try wearing indigo clothing, using blue crystals like lapis lazuli or sodalite, or meditating on the Ajna mantra.

The third eye and mental health

The idea of the third eye has been discussed in parapsychology, the study of a mental phenomenon that cannot be explained. It’s believed this area acts as a doorway for spiritual communication, including telepathy, clairvoyance, lucid dreaming, astral projection and aura perception

How to unblock your third eye

There are numerous ways to heal your third eye . Among these techniques are:

1. Meditation is a great way to clear your mind and focus on your third eye . Close your eyes and sit in a comfortable position.

Consider imagining a bright, white light shining on your third eye (also consider a light therapy for chakras). Allow the light to fill your entire being as you focus on it. You can also try chakra candles.

2. Yoga is another excellent method for healing your third eye . There are numerous yoga poses that can assist in opening and balancing this .

Your intuition is governed by the third eye

It is also about our ability to see clearly and make decisions based on that knowledge. The third eye is often associated with light and illumination.

This assists us in seeing things objectively and not being swayed by our emotions or the opinions of others. We can trust our instincts and make decisions based on what we know to be true if our third eye is balanced.

Psychic abilities are associated with the third eye .

Everyone has innate abilities within them.  The third eye is linked to abilities (for instance clairvoyance) and is in charge of our ability to see beyond the physical world.

This is in charge of our intuitive abilities and ability to see into the future.

A balanced third eye allows you to be able to fully utilize your abilities. We can use our intuition to make decisions that are in our best interests. We can also see past the physical world and into the spiritual realm.

Check out this video for more information on the Third Eye .