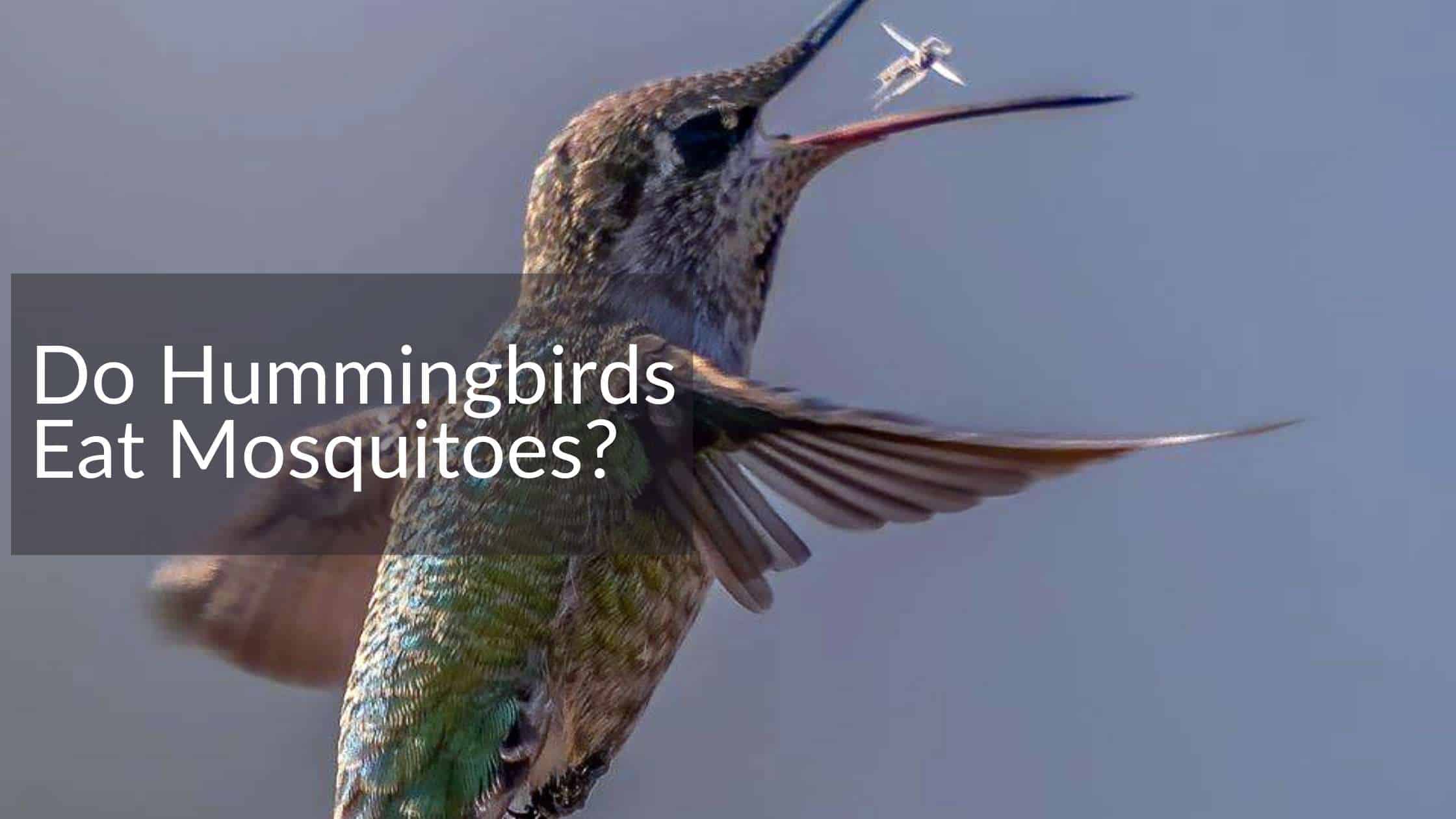 Most of us may believe that hummingbirds feed only on sweet nectar from the flowers. However, their large appetite is not fulfilled only by nectar. They need other sources of food as well. Do you know that 80% of their diet consists of insects? Hummingbirds can eat from a few dozen insects to thousands of insects in a day. They feed on a variety of pests and insects. Let’s find out which insects hummingbirds eat and whether hummingbirds eat mosquitoes.

Yes, hummingbirds eat mosquitoes and they can eat plenty of them. Due to the small size of mosquitoes, the hummingbirds can easily capture them and eat them from the spider webs, standing water, or from the air. The exceptional eyesight and sensing power of hummingbirds help them find these very tiny mosquitoes and prey on them. They prey on mosquitoes by hovering around them in the air for a while and then attack them.

What do hummingbirds eat?

Hummingbirds feed on nectar derived from flowers, or sweet sugar solutions. It fulfills the water and sucrose needs of these tiny birds and provides them enough energy to drive their metabolism, flights, and energetic nature. Nectar, however, doesn’t supply nutrients such as proteins, vitamins, minerals, amino acids, and so on to the hummingbirds. So they need solid food in the form of insects, sap, pollen, ashes, sand, and fallen fruits. Among the insects, hummingbirds don’t just feed only on the fully formed insects. They eat them as eggs and larvae as well.

Yes, hummingbirds eat bugs and insects. The favorite insects of hummingbirds include spiders, wasps, beetles, flies, and aphids. Among beetles, spiders, leafhoppers, and gnats, there are some specific species that the hummingbirds prefer to feed on.  Hummingbirds prefer small insects that they can simply capture and swallow without dismembering them like other birds. They hover around the insects for a while and attack them.

Hummingbirds do not eat bees. On the other hand, it is known that hummingbirds chase the bees away from the nectar-producing flowers. In addition to this, the aggressive behavior of bees and smaller bill of the hummingbirds are some other reasons why hummingbirds don’t feed on bees.

Wasps don’t make a part of the hummingbirds’ meal. There are several reasons. The hummingbirds have been seen getting in fights with wasps and killing them. Wasps, being aggressive creatures themselves, are not really fond of being around hummingbirds. They feed on the same insects and hummingbirds, being larger than wasps, usually win insects as their food source. This implies that if you have hummingbirds in your area, there will be a significantly lesser number of wasps in those regions. It is because the hummingbirds consume the insects and there is no food source to attract the wasps. There can be some species of wasps that the hummingbirds may like to feed on, such as sand wasps, yellowjackets, paper wasps, black wasps, and spider wasps (in case you’re interested, we wrote about the wasp symbolism)

Hummingbirds don’t eat ladybugs. They are both pollinators and are lured by similar flowers having bright colors and producing nectar. They occupy the same level in the hierarchy of living organisms. They may both feed on pollen and act as beneficial pollinators for flowers.

No, hummingbirds don’t eat cicadas. They have no relationships with cicadas. Neither do they eat them nor do they compete with cicadas for food. The only similarity between hummingbirds and cicadas lies in their sizes. If you’re interested we wrote a post about them: cicada symbolism.

Great visuals/video in 4k about hummingbirds

The hummingbirds are the smallest birds in the world and may seem to have a small appetite. The truth is that they have a large appetite that needs the nutrition equivalent to around 300 flies in a day. These nutritional requirements of hummingbirds are met by various insects, depending upon the availability and size of the insects found in that region. Interested in the symbolism of the hummingbird? or you’re wondering: are hummingbirds good luck? – keep on reading…