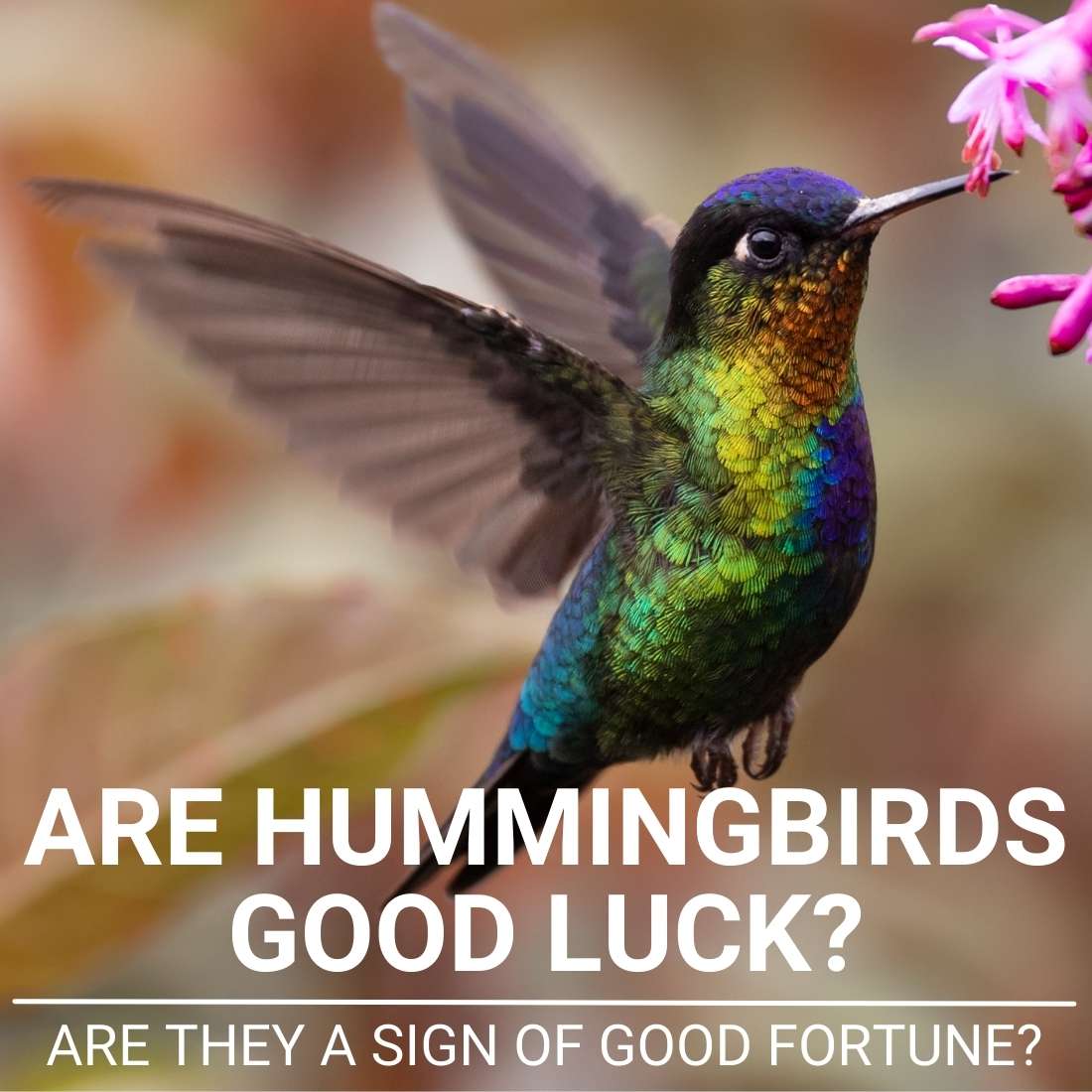 Hummingbirds are one of the most exquisite creatures in the bird kingdom and are said to bring positivity into our lives. That’s because, in several cultures around the world, hummingbirds are symbols of wisdom, good fortune, and messages from spirits. And that’s why many people ask themselves: ‘are hummingbirds good luck?’

Tiny yet powerful, these birds have mysterious characteristics and play an important part in the culture and folklore around the globe.

Do hummingbirds bring good luck? Are there any specific meanings associated with hummingbird visits? Learn about the symbolism and lore of these fascinating creatures in this blog post. We’ll discuss everything from their place in mythology to the reasons why people believe they’re lucky. So if you’ve ever wondered about hummingbirds and good luck, read on!

Read on to discover the mythological meaning of hummingbirds and whether they have any great fortune in store for you.

“As long as the hummingbird had not abandoned the land, somewhere there were still flowers, and they still go on.”

Although it may not be credible that a small bird like a hummingbird is capable of bringing us good luck, size doesn’t matter in this case.

With their vibrant, majestic appearance and enchanting beauty, it’s no wonder that Hummingbirds are symbols of good omen.

Lighter than a penny, these birds are around 5 inches in length and extract nectar from flowers with their long and slender bills. What truly catches your attention, however, is the peaceful humming sound that the rapid flaps of their wings emit.

The impression of the hummingbirds as spiritual beings is no surprise because of their appearance and dates back several centuries. This symbology originated in regions in many different locations so let us take a look at how this came to be.

In the Americas, several myths and beliefs revolve around hummingbirds. Let’s look at how some of them originated.

On the western side of the United States lies a desert called the Mojave. Here lived a native tribe of the same name who considered hummingbirds to be guides for human beings.

The story behind this is that the Mojave tribe used to live below the surface, in total darkness. A hummingbird was sent in search of light and guided the people out to the surface under the light of the sun.

Once upon a time, in the Apache nation, lived a young man named Wind Dancer. He was deaf but was able to sing beautifully. A woman named Bright Rain appeared in his life and they got married soon after.

Stories From The Navajo and The Hopi

Similar to the Navajo, the Hopi also have a legend that revolves around a hummingbird traveling long distances. As the story goes, the land of the Hopi was struck by famine. There, a hummingbird toy made by two children came to life. So, to show gratitude, the bird would bring corn to the children but it was only a temporary solution.

The Aztecs & The Mayans

Speaking of Gods, the Aztec God Huitzilopochtli who represented the sun and war was depicted as a hummingbird. The mother of the sun god gave birth to him while keeping a ball of hummingbird feathers that fell into her bosom mysteriously from the sky. They also believed that because the God of War was a hummingbird, fallen warriors also reincarnated as hummingbirds.

Interacting With Hummingbirds: The Symbolisms

Humans are bound to interact with birds and animals at some point. This is especially the case if they are in search of them due to their belief in myths and symbology and the hummingbird is no exception.

Let’s look at the symbolism of coming upon a hummingbird.

If a hummingbird visits you, then they are believed to be the bearer of good news. Furthermore, a lost loved one may also visit you in the form of a hummingbird.

Hummingbirds coming to you may also symbolize new experiences and ideas coming to you. So if you do get a visit from the little wings, stay positive that good things are about to come into your life.

If you have eye contact with a hummingbird, then you are about to experience a great deal of joy coming into your life. So keep your chin up and move forward as good things are right around the corner.

3. Hovering in Front of Your Face

Additionally to making eye contact, if the bird comes up to your face, it symbolizes otherworldly or heavenly energies surrounding you. Pay close attention to these energies and remember what you were thinking at the time of the hummingbird’s arrival.

This is a signal that the energies are going to connect with your thoughts and guide you accordingly.

There’s no definitive answer to this question, as opinions vary on the matter. However, many people believe that hummingbirds are good luck, and there are a few reasons why.

First of all, hummingbirds are often seen as symbols of joy and happiness. They’re known for their cheerful songs and playful nature, so it’s not surprising that some people consider them to be lucky charms.

Additionally, hummingbirds are regarded as indicators of change. When they show up in someone’s yard or garden, it can be interpreted as a sign that something new is about to happen. This could be good or bad news, depending on the person’s perspective, but either way, it’s seen as an auspicious sign.

Finally, hummingbirds are also associated with luck in love. Some people believe that if a hummingbird visits your house, it means that you’re going to find true love soon.

So do hummingbirds bring good luck? It’s hard to say for sure, but there are several reasons why many people think they do. If you’re curious about the topic, be sure to check out some of the links below!

Hummingbirds are nature’s finest treasures that weave seamlessly into ancient beliefs and mythology. Even to this day, hummingbirds are seen as a symbol of something positive coming your way.

Furthermore, there are thousands of different hummingbirds and they all represent a different message so, make sure to check out the type of hummingbird you encountered.

We hope that this article has helped educate you about hummingbirds and the deep meanings they symbolize.

We have also written about the hummingbird symbolism of death – check it out.