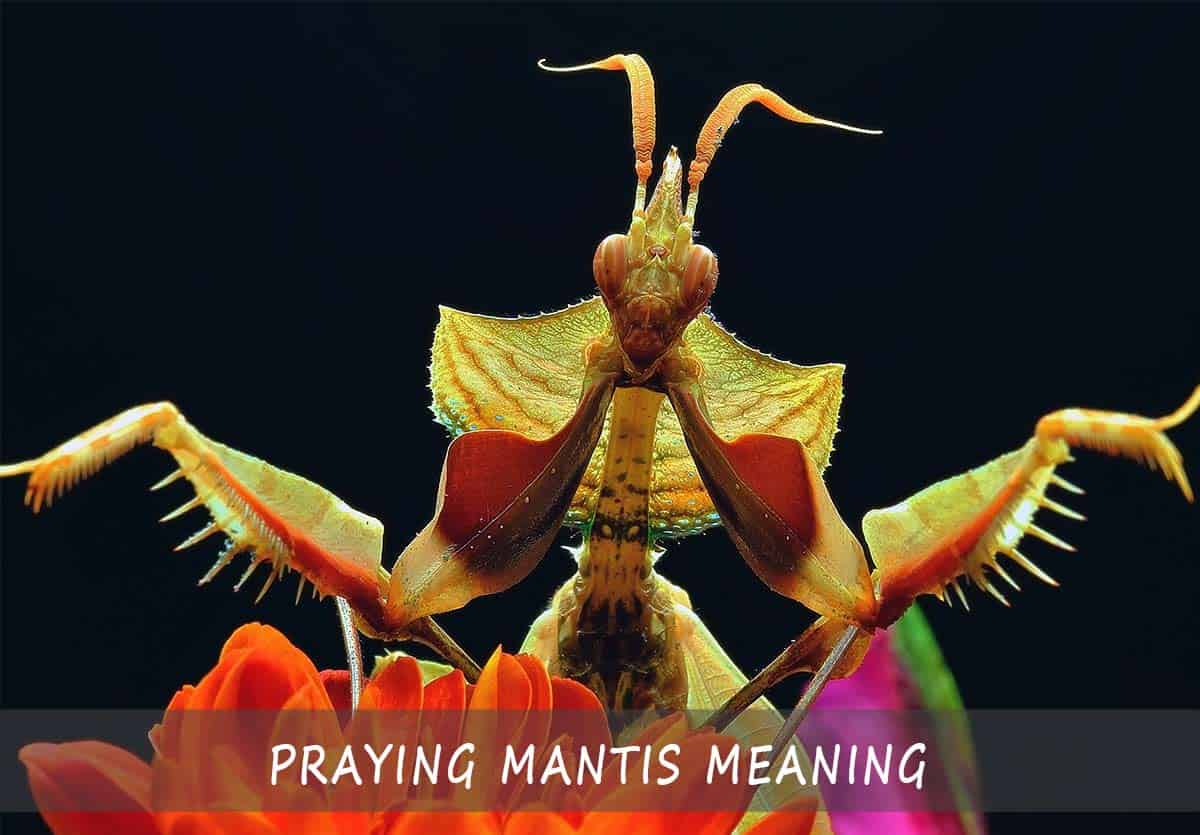 A praying mantis is one of the few insects that are not only pleasing to look at, but also invoke a sense of awe and wonder. What is about these almost alien-looking creatures that make us stop and stare? The mystery and magic of the praying mantis can actually be traced very far back. The people of Ancient Greece and Ancient Egypt saw these insects as guides to those who needed direction either in life or death. In Chinese culture, the praying mantis is an omen of good fortune and prosperity. The insect’s repeated waving of its forelegs in a typical posture known as “praying” was thought to resemble the ritualistic act of prayer. In ancient China, people believed that when they saw a mantis they would know their crops would be successful for another year.

The praying mantis is also thought to have a connection to the spiritual world and, as a result, is able to deliver us messages from higher beings or guides who exist to help us discover and live our purpose.

This blog post discusses various interpretations and symbolism behind this unique creature.

The Symbolism behind the Mantis

When we observe a praying mantis, they often seem to move slowly, calmly, and with purpose. It only makes sense that they represent stillness, calm, patience, awareness, and being mindful. It should serve as a reminder that despite how crazy our lives might get, we should make time for these practices in our own lives.

In Western cultures, the mantis is seen as a predator because it feeds on other insects. It can also be symbolic of nature’s cycle of death and rebirth due to its ability to reproduce through egg fertilization in adulthood. In ancient Buddhist culture, they believed that praying mantises were said to represent patience and perseverance because their forelegs are raised up when waiting for prey.

Praying Mantises have been found throughout history with various cultural interpretations and symbolism behind them depending on what people saw in these creatures during different periods of time.

Spiritual Meaning of the Mantis

The praying mantis spiritually represents looking inward and trying to figure out what your highest purpose is. This often involves doing meditation and letting yourself disconnect from the hustle and bustle of reality so you can gain clarity and intuition.

There are many different interpretations of what it means to see a praying mantis, but another interpretation is good fortune and prosperity – this belief originated in China where people often saw mantids as omens of success or an indicator that you have found your place in life.

Mantises could also predict weather changes by observing how long it takes them to turn around on a plant or leaf they are on. If the mantis turns around quickly then it is a sign that storms will come soon, but if it takes them a while to turn around and face in another direction then this could be an indicator of fair weather coming.

It’s forelegs are thought to resemble ritualistic acts of prayer which led people to believe that the insect was a symbol for religious piety, which embodied patience and humility. The act also showed they would be rewarded with earthly success if their prayers were heard by deities or spirits.

This insect was thought to have magical powers by some ancient cultures – for example, people living near Lake Victoria believed mantises were spirits of their ancestors who would strike down your enemy with lightning if you captured one alive.

Other interpretations say a praying mantis can predict how long someone has left to live or whether they will die from illness; Chinese folklore says seeing 10-20 mantis within 24 hours means impending death while seeing 20-30 indicates imminent death.

Across the world, the praying mantis has been used as a symbol for different cultures. It is thought to represent passive aggression, patience, and masculinity in some societies. There are also interpretations of an entire life cycle with regards to this creature’s meaning- from birth through death and rebirth- that are prevalent across many cultures.

The Native Americans, in particular the Cherokee tribe, maintained that the praying mantis was a symbol of great strength. The insect’s forelegs were interpreted to represent bows and arrows – weapons used for hunting game animals or enemies. In addition, it is believed by many cultures that seeing a praying mantis predicts rain because they typically appear after rainfall when there are few other insects around.

Native American tribes believe this creature also has healing powers. One legend claims that if one catches a small praying mantis alive then swallows it whole without chewing on any part of its body then one will be cured from being bitten by either snake or spider venom.

In Christian culture, the praying mantis is a symbol of Christ’s victory over death. The insect stands up with its forelegs in “prayer” and as it turns around, it appears to be turning pages on an invisible book – much like Jesus reading from the Bible.

The Christian symbolism behind this creature represents one more way that people have come to understand some fundamental truths about life: that there are many ways for humans to achieve salvation through faith and love.

Mentions in the Bible

In the Bible, the praying mantis is a representation of spirituality. It has often been said that when you come across one, it is a sign that there are angels watching over you and guiding you. Read on about Praying Mantis Meaning in the Bible.

In Chinese culture​​ the Praying Mantis is an omen of good fortune and prosperity. The insect’s repeated waving of its forelegs in a typical posture known as “praying” was thought to resemble the ritualistic act of prayer.

In ancient China, people believed that when they saw a mantis they would know their crops would be successful for another year.

The Celtic word for “mantis” is spelled in Irish as mantidh, which means a “seer” or one who can see into the future. The Celts believed that those with second sight were able to predict events both far away and near at hand by seeing into their mind’s eye, just like a Praying Mantis sees around it without moving its head. This ability was considered an important trait among Druids because they would need this type of insight during rituals and divinations when communing with nature spirits who embodied everything from fertility to death and destruction. In this way, the Celtic culture viewed the insect as much more than simply an insect but also as having supernatural powers over life itself.

In Greek and Latin Culture

In Greek culture, the praying mantis is a symbol of vigilance and patience. This creature would often wait for its prey to come by then snatch it up quickly with its forelegs so as not to lose the opportunity. The Greek people believed this was symbolic of how one should live their lives; always paying close attention, never missing an opportunity, but also being patient in waiting for what they want or need.

In Latin culture, the praying mantis holds different meanings depending on who you ask. Some believe that the insect’s camouflage abilities are representative of how we can hide from our fears while others see them as symbols warning about false prophets (those priests/clerics that preach words without truth).

Can a Praying Mantis Hurt you?

Upon closer inspection of these majestic insects, you will notice tiny spikes on their front legs. Luckily, if you do get jabbed or “attacked” they will do little, if no damage, at all. They can also bite you but, once again, the odds of their bite doing any harm are ridiculously small. Sustaining an injury from these insects is no worse than a papercut. Thankfully, the female praying mantis’s partner is the only one who should be concerned.

As you can see, the legends and beliefs behind these insects have existed since the beginning of time. Their presence is viewed as lucky, insightful and serves to remind us that we need to stop every now and then to take time to work on ourselves. And, although they are harmless to humans, it is best that we observe them from afar and let them continue carrying their messages to others.

Meaning When You See a Praying Mantis

There are a number of reasons as to why a praying mantis has made an appearance in your life. In order to figure out the reasoning behind it, it’s important to consider a few key factors:

All of these questions can help provide you with a clear answer as to why you’re seeing this beautiful insect.

If you are constantly on the go and living a fast-paced lifestyle that doesn’t feel fulfilling or seems to have a purpose, then you should take seeing a praying mantis as a sign that it’s time to slow down. You should use that time to meditate and work on strengthening your intuition; this would be the perfect time to do just that. You can then use your intuition to help guide you through life and make decisions that are in alignment with your divine purpose.

If you are waiting to hear some good news or are in need of a little luck, then you might not have to wait much longer. It has been said that the praying mantis is a sign of good luck, or that good news is on the way.

Since the praying mantis is believed to have spiritual connections, it would make sense that they have the ability to bring messages from “the other side.” So, if you have recently suffered the loss of a loved one, you can take comfort as it is a sign from them that they are safe and watching over you.

Seeing a dead praying mantis, although upsetting, also has meaning. And while one would automatically assume it would have a negative connotation, the exact opposite is true. One of the meanings to consider is that you need to take more time to focus on your spirituality. It could mean that you are too concerned with the material things in life and need to start focusing on the more meaningful aspects of life.

Likewise, it could also be a sign that even though you are practising honing your intuition and taking time to meditate, you might be spending too much time doing so. Instead of making decisions and taking action, you’re too focused on looking inward and might even be missing signs that your guides are putting right in front of you. Too much of a good thing is possible and the praying mantis is here to remind you of just that!

If you are lucky enough to have a praying mantis land on you, you should take that as a sign that you are at a crossroads in your life. Either you are trying to make a big decision that will have a significant impact on your life or it’s time for you to make some serious changes that will set you on a brand new path. It could also be a sign that you are starting to align with your higher purpose and that the energy that you’re emitting is high frequency. That just means you are headed in the right direction! A praying mantis is believed to be attracted to people who “vibrate higher” so one landing on you is just another way to let you know you are in alignment with the universe and your purpose.

What is the meaning of a praying mantis? A lot of people might say that it’s about patience and waiting. But, there are also other interpretations such as transformation or change. We’ll leave you with this thought provoking question for now… what does your interpretation mean to you?

[Video] Meanings and Totems of the Praying Mantis