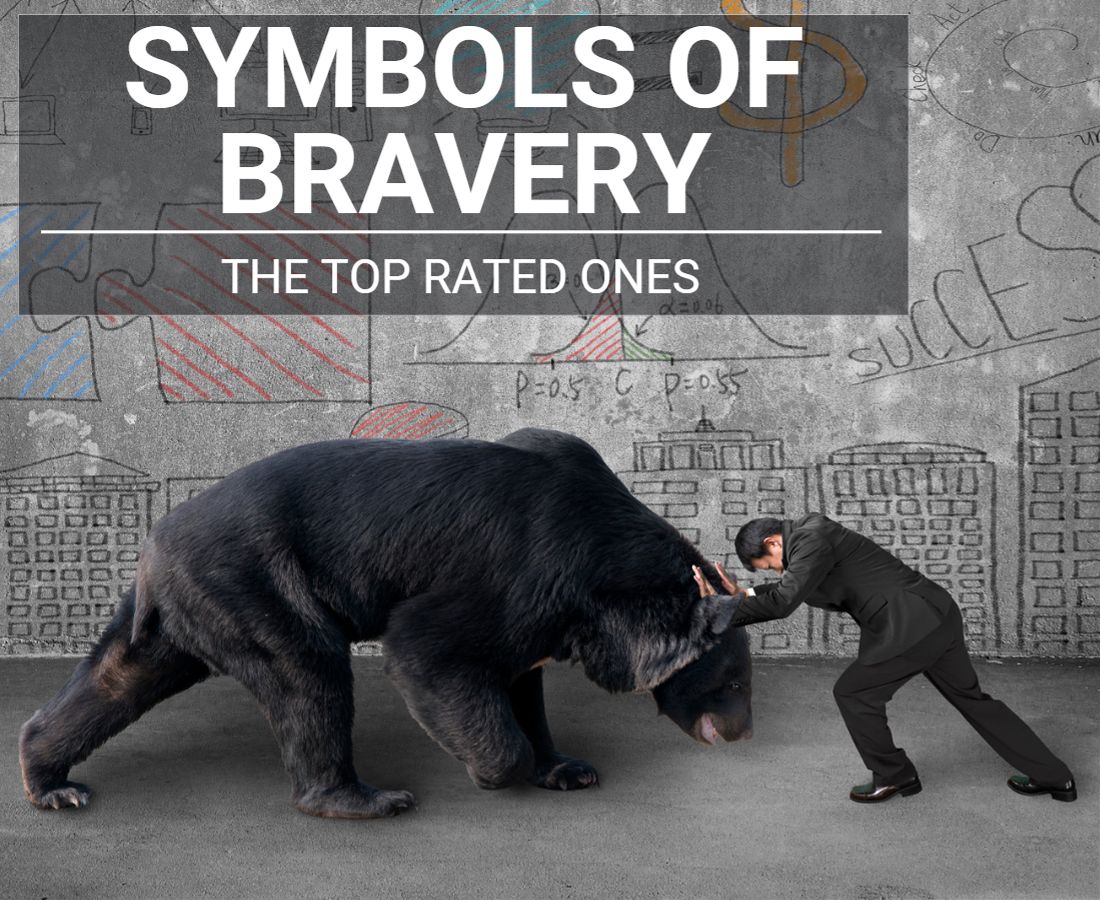 Whether you are leaving a high-paying yet toxic job or cutting off strenuous ties, being brave means going through something that may hurt us in some way. While opportunities to be courageous abound, standing up to your fears and living with their consequences actually takes a whole lot of heart.

But before your cold feet kick in, it is best to remember that even the slightest sign of grit is enough to help us face life’s difficulties with confidence and conviction. Bravery is an admirable trait that often requires a whole lot of mustering. These symbols of bravery aim to leave us self-assured, gutsy, and daring.

Throughout history, ancient Romans have long held a nasty fascination for gladiators. People saw gladiators as depictions of entertainment, bravery, sacrifice, and strength. While their lives were often brutal and short, people admired these courageous warriors for their endurance, fearlessness, and willingness to die for other people’s amusement.

As the Romans have time and again displayed their bloodlust and fondness for cruelty, the gladiators repeatedly demonstrated their ability to face and, at times, even overcome death. They have inspired those fortunate enough to have witnessed such bloody battles to live out the Roman virtues of bravery, discipline, and fearlessness.

The Japanese recognize the samurai as the most honorable warriors of pre-modern Japan. They were elite soldiers who led their lives according to the ethic code of bushido, or “the way of the warrior.” Firmly disciplined and virtuous, they strongly asserted principles such as loyalty, respect, bravery, and righteous behavior.

Samurai were highly trained and dedicated to the service of the nobles. The word “samurai” basically translates to “those who serve.”

Drawn to the teachings of Zen Buddhism and displaying values that include integrity, self-control, bravery, and honor, samurais were perhaps history’s most reputable warriors.

Revered as a significant symbol representing the Dharma, the Ashoka Chakra consists of 24 spokes that encourage us to follow a righteous path, including peace, love, bravery, and spiritual knowledge.

The Ashoka is the highest military award for bravery in battle. Many believed that the Buddha created it, who, after gaining enlightenment, spoke about the Dharma to his followers.

The Ashoka is traditionally on the Indian flag. It was derived from different moral ethics that many believed could aid us in attaining nirvana, or the highest level of spiritual awareness. It was a symbol of self-reliance during Gandhian times.

The Ashoka encourages us to speak up and say something about the issues we fear won’t be received well.

The importance of bravery

Bravery is an important quality to have in life. It can help us overcome our fears, achieve our goals, and make a difference in the world. When we are faced with challenges, bravery can give us the strength to persevere. And when we see someone else being brave, it can inspire us to be brave ourselves.

Bravery is not about being fearless. It’s about facing our fears and doing what’s right, even when it’s hard. So the next time you are faced with a challenge, remember the power of bravery. And never forget that you have the courage to overcome anything.

From Hercules to Achilles, every Greek hero has had a run-in with these mighty warrior queens. The Amazons were a race of ferocious women known for their bravery, pride, and fantastic riding skills. Many believed they communicated with men only for reproduction to ensure their tribe’s survival.

The Amazons have lived far from the civilized world. They were feared for their brutality, despised for their aggressiveness, and admired for their bravery. Often depicted on horseback, clad in armor, and with a bow in hand, it doesn’t come as a surprise that they are considered a feminist’s poster child.

They are a powerful reminder that the world makes way for the brave and that we are less likely to get anywhere if we always play it safe.

For the Native Americans, body painting is a sacred act that conjures strength, bravery, and higher spiritual knowledge. It was considered a form of prayer during hunts and battles.

Their warriors also used red war paint to invoke courage and appear more ferocious when faced with intruders and soldiers of opposing tribes.

Often derived from berries, beets, roots, and ochre, red war paint symbolized power, success, and boldness in battle. As the Native Americans have long believed that we are connected with nature, donning war paint signifies the transfer of divine power to the wearer.

If you are one of the millions crazy about rugby (or New Zealand), you have probably seen a haka dance. Often involving stomps, chest pounds, sticking out of the tongue, and bulging eyes, it is one of the country’s most significant and powerful native traditions.

It represents a tribe’s unity, bravery, and pride.

A captivating dance that commands immediate respect, the haka was traditionally performed before a battle and is meant to bring fear and intimidation to the opponent. While they do the haka dance to fire up their warriors on the battlefield, it has also been used to call upon, welcome, and celebrate the principles of bravery, heroism, and valor.

Like most symbols in history, the clenched fist has influenced various individuals. While several groups view it as a symbol of unity and resistance, many people have used the closed fist as a symbol of bravery and the courage to speak out against injustice and oppression.

Just as our worldviews and life challenges may have shifted, the clenched fist has brought communities together to show abusive authorities the power of solidarity. Believed to have been inspired by an 1848 uprising that led to the overthrow of a monarchy, it symbolizes strength, determination, and the bravery to fight.

In the military, there are different types of bravery. There is the physical bravery that’s needed to put one’s life on the line in battle. And then there is the mental bravery it takes to stand up against injustice, even if it means going against orders.

For cadets, the wings and sword symbolize both kinds of bravery. The wings represent the mental courage to think independently and make ethical decisions. The sword represents the physical courage to protect others and defend one’s values.

The Medal of Honor is the highest military honor in the United States. It is awarded to members of the armed forces who display extraordinary heroism in the face of enemy fire.