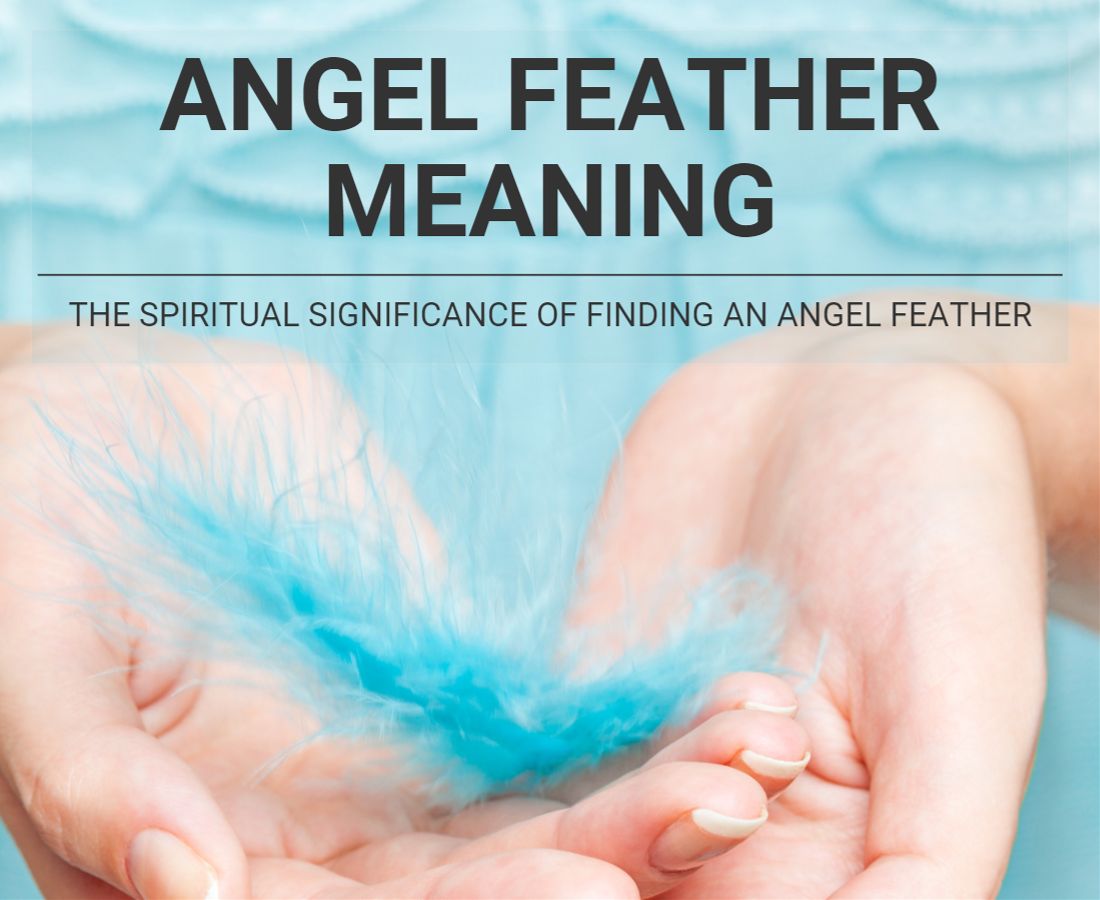 Many believe that our guardian angels check on us daily subtly and indistinctly. While we may be too preoccupied to notice the signs, these heavenly messengers would often resort to tactics to ensure that we receive guidance and blessings from the Divine.

Comforting and soft, feathers are thought to be how angels attempt to connect with us. Often appearing in the most random places, let’s find out what stumbling upon an angel feather means.

“Feathers appear when angels are near”

What is an angel’s feather?

As they are perceived to come directly from our heavenly guardians, various cultures see angel feathers as the most significant physical manifestation of their mystical presence. It is known to be the most effective way for these sacred creatures to keep their connection with us and is a sign of their guidance and protection.

Much like the messages that it brings, an angel’s feather is gentle and delicate and often arrives in vibrant colors. Although it is practically just a bird’s feather, this flying creature’s ability to soar to the heavens and their association as “messengers of the gods” give their plumage a huge spiritual significance.

Twirling and floating down from the most unexpected places, the angle feather meaning is that you are kept safe, rewarded, and in the presence of angels.

What do angel feathers symbolize in different cultures?

Regardless of when or where you find an angel’s feather, the message remains the same—it is a reassurance of our guardian’s abundant love and a promise of their never-ending protection and guidance. Whether the angel feather meaning is a sign of healing and wisdom or they are simply attempting to intervene in a particular way, here’s what angel feathers symbolize in different cultures.

Throughout Native American history, feathers have been used to honor those who have shown exceptional physical strength and courage. While it was often used to adorn their clothing, several tribes called on the power of angel feathers to bring about healing, cleansing, and spiritual awakening. It was also given as a reward to those considered of high prominence.

Along with the belief that angel feathers are a gift from the Divine, they were often placed in homes to invoke their ability to protect them. The Native Americans also believed that since birds can fly near the heavens, an angel’s feather was a sign that their departed loved ones were watching over them.

Revered for developing the calendar system and hieroglyphic writing, the Aztecs were among the most intelligent people in the ancient world. However, much like most traditions, they also saw angel feathers as harbingers of remarkable symbolism. This is evident in their use of vibrant-colored feathers to create intricate headdresses for their leaders.

Their reverence for angel feathers may have stemmed from myths about how they chose the city of Tenochtitlan as their capital. Legend has it that after years of wandering in the desert, the Aztecs saw an eagle perched on a cactus. They decided to set up and grow their civilization in that now-celebrated location.

While they were mostly admired for their incredible feats in agriculture, the Aztecs’ high respect for angel feathers inspired their civilization to use them in clothing, home decorations, and weapon development.

Considered a symbol of truth, fertility, and pride, the Celts believed that adding angel feathers to their clothing allowed them to channel their power and gain the gifts of transcendence, great instincts, and knowledge. Believing that they were messengers from the gods, Celtic tradition saw an angel feather as a carrier of souls as they journey to the otherworld and a sign that a fresh start or a new life is about to happen. They also considered it their connection to their ancient gods.

Acknowledged as a message sent by the sky gods, Egyptians have long held angel feathers in high reverence. Its association with the Egyptian goddess of justice Ma’at led many to believe that they could use feathers to determine whether a person is trustworthy.

Legend tells us that when someone dies, their hearts were balanced with the feathers of Ma’at. The procedures of the Hall of Judgement were easy to understand: if your heart and the feather remain balanced, you are considered a righteous man. If it falls off, you are immoral and bound to spend eternity in hell. The moral of this story? Keep your heart undemanding and light, for it is more pleasing to the gods.

What does an angel feather symbolize?

Angels favor using feathers to let us know they are listening to our requests and prayers. However, much like most symbolism, the different colors of angel feathers offer different meanings.

White angel feathers, perhaps the most common feather color, are widely acknowledged as a symbol of purity and innocence. Finding them is a reassurance from your guardian angel that your loved ones who have passed are well. Seeing one in an unusual spot indicates they are around you to listen to your prayers and protect you.

While black feathers are seen to symbolize all things evil and malignant, they actually remind us of our capacity for spiritual protection and intuitive wisdom. It tells us how to uncover the gifts we often hide deep inside. Chancing upon a black angel feather is a reassurance that we will never be alone, for our spirit guides are constantly by our side. It also encourages us when we go through difficult times.

Displaying the color that represents unconditional love, pink angel feathers show the commitment of our angels to protect and guide us. Perhaps the best indication that your guardian angel is listening each time you have questions about relationships is this rare plumage that appears when you seek affirmation about how great God’s love is.

A sign that a period of toxic relationships is about to end, seeing this feather is a reminder of the loving presence of your angel.

Yellow angel feathers, harnessing the power of the sun, tell us how we should remain cheerful, lighthearted, and warm. It reminds us to stay away from the negative things surrounding us and focus on achieving what we have long desired.

Apart from inspiring you to think out of the box, this feather would often appear to start you off your journey toward a path of physical healing and spiritual restoration.

Represented by a color that radiates peace and calm, blue angel feathers are known to strengthen our connection to the Divine. Considered the best sign to locate when you have to make an important decision, spotting one indicates that you are heading in the right direction and should take that leap of faith. It signifies that you are on the path of truth, self-discovery, and empowerment.

Bearing the color of passion, power, strength, and vitality, finding red angel feathers signifies the rejuvenation of physical energy and healing from illnesses and disorders. Also considered the color of victory, it is a reassurance that you are about to experience financial success. An indication of intense feelings, this feather tells us to welcome the arrival of a deep romantic relationship.

While the orange color has long been associated with success and creativity, angel feathers of this color remind us to enjoy each of our life stages by simply embracing even the most challenging things.

Apart from a sign that healing from depression and certain digestive disorders is about to occur, it reminds us about the importance of being spontaneous and the physical and spiritual benefits of having fun.

Nothing tells you to vigorously go after your dreams better than a green angel feather. It indicates that a time of opportunity and abundance is at hand. Donning a color that represents tranquility and balance, the green angel feather encourages us to let go of all the negative feelings and ideas in our minds.

This feather reminds us of the healing power and beauty of nature.

Featuring a color that signifies a balance between the physical and spiritual worlds, finding a brown angel feather is a powerful reminder of the importance of staying connected and caring for Earth. This feather tells us how we should soar high to achieve what we desire while remaining humble and keeping our feet on the ground. It often floats in to help us maintain a more spirited and balanced perspective.

Rarely seen on birds, stumbling into purple angel feathers inspires us to embrace change and welcome periods of transformation. This extraordinary feather floats in with enlightenment, awakening, and wisdom messages. It also brings forth a feeling of peace, clarity, and gratitude.

Does a feather mean good luck?

A symbol of hope and encouragement, finding a feather can be a powerful reminder that we are never alone. It could suggest that the universe or a higher power is on our side – actively sending us signs to help guide us along life’s journey. Whether you’ve found one in your path, tucked inside a book at the library, or caught it blowing by in the wind…a seemingly random encounter with this special gift is sure to bring serenity and joy!

Are feathers signs of angels?

Feathers are often seen as signs of divine protection that have been sent from the heavens above. Many believe they represent a special connection between angels and mortals, providing evidence that even if we can’t see them, our guardian angel is by our side through life’s tough times. Finding a feather could be interpreted to mean an angel has left it there, especially for you—a reminder of their eternal presence in your life!

What does it mean when I see angel feathers during my spiritual awakening?

A spiritual awakening can be a transformative and eye-opening experience, with many people interpreting certain signs or messages as support from the divine. Seeing an angel feather during this time could signify that one is on their true path in life – they are being watched over, guided to reach their full potential, and provided all of the necessary tools for success along this journey.