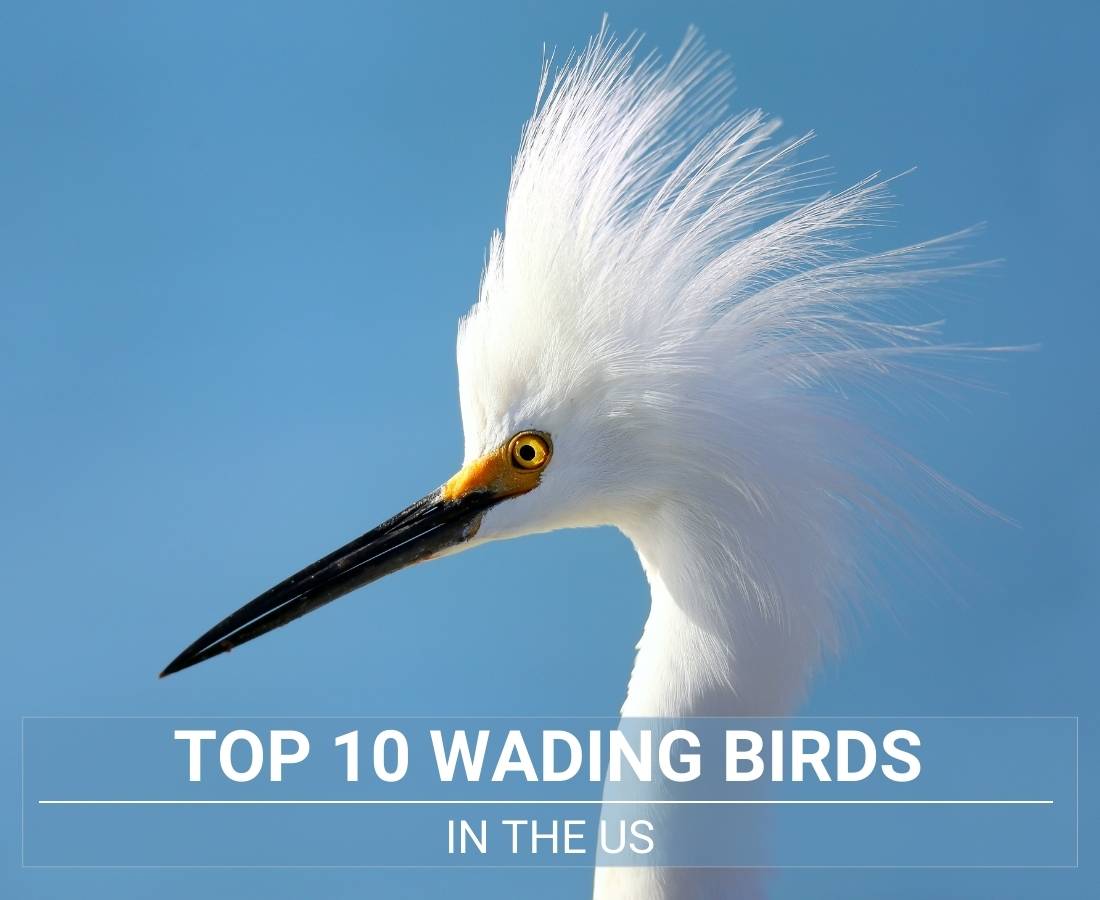 Wading birds, more commonly known as waders, are shorebirds with impressive characteristics. They are long-necked birds found on the shores, mainly in North America.

Waders prefer wet environments. In the moist ground, they search for insects and other crawling creatures. Numerous wading bird species might be considered ecological markers of a wetland’s health and the condition of the surrounding landscape. Wading birds and other wildlife environments become unsuitable due to climate change, pollution, and sedimentation. Those that eat fish and big invertebrates are high on the food chain in wetlands. Their health is a good indicator of the health of their prey as well as the water, soil, and air around them.

So, in this post, we’ll talk about the most interesting top 10 wading birds in the US.

The long-legged American Avocet is a remarkable shorebird with a slender, long beak that curls upward. On the back and sides, there are black and white stripes. Found in coastal bays, freshwater and saltwater marshes, saline lakes, and mudflats.

Avocets pounce on aquatic insects by sticking their bill underwater and swinging it back and forth along the bottom. Avocets use a variety of deceptive techniques to defend themselves, including loud shrieking, a “crippled bird” act, and even a “dive bomb” display in which the bird swoops down on the predator and just misses it until it flees.

Flamboyance is a flock of flamingos. The greater flamingo is the only flamingo species native to North America.

Chicks of the flamingo species are fed a liquid called crop milk by their parents. Mud is used to construct flamingo nests. Generally, flamingos inhabit coastal areas with shallow salt or brackish water (where saltwater and freshwater mix).

To keep their bodies warm, flamingos can stand on one foot for extended periods—even long enough to fall asleep. Flamingos can bend their legs like humans and must flip their heads “upside down” to consume food as filter feeders. Their diet is what gives them their distinctive pink hue.

A different angle to the flamingo

The snowy egret is a white heron family member with black legs, yellow feet, and a thin, black beak. From April to September, you can see these graceful birds all over North America.

Snowy egrets live in wetlands, ponds, streams, rivers, and estuaries. When foraging, snowy egrets churn up the bottom of small ponds and marshy areas, flushing food into view. Before diving into the water, snowy egrets will frequently hover to catch food in their bills.

When the breeding season begins, male snowy egrets will perform mating dances in order to entice a female. These dances can be dramatic or even hilarious. From 1880 to 1910, their feathers were used to embellish women’s hats and clothing. This resulted in near-extinction in the United States.

Certainly one of the most impressive birds on our list of wading birds in the US.

More about the egret

A tiny, stocky, wading bird, the Green Heron is widespread in marshes across most of North America. Since it waits motionlessly for small fish to get within striking distance, it may not be easy to notice.

It typically makes itself known by loud squawking. They like leading secluded lives. The green heron is one of the few intelligent birds that can utilize tools.

More about the heron

Ibises have curved, thin bills to probe into mud, grass, or shallow water while out hunting. They are found in shallow lagoons, lakes, bays, and marshes.

They eat soft mollusks and tiny fish using their narrow, downward-curving bills. They are known as social birds that gather in groups to forage, migrate, and nest.

When flying, they form V-formations or diagonal lines. This arrangement reduces wind resistance for trailing birds. Often, they are quiet birds that only scream or croak while they are nesting.

More about the ibis

Contrary to its name, the Black Rail is not black at all. This bird has a reddish brown body and a grey head and breast. Over the rusty brown area of its feathers, there are specks of bright color. They are difficult to spot due to their small size and ability to blend in with the reeds and shrubbery.

Hearing one is far more likely than seeing one. When the light goes out, these avian species communicate through territorial calls.

Black Rails favor very shallow areas where they can wade without difficulty. Their preferred habitats are the edges of marshes and wetlands. They are currently classified as Endangered by the IUCN Red List.

The other names of long-billed curlew are the Sicklebird and the Candlestick bird. The biggest shorebird in the United States has an extraordinarily long beak.

The migratory bird’s wintering habits are farther south. Although it may sometimes be seen in huge groups along the western coast of North America.

These birds are very agile with their 8-inch down-curved beak while eating, drinking, preening, scratching, and flying. It’s fascinating to observe the curlew feed since it travels swiftly and displays amazing agility with its long bill.

By far the longest bill on our list of wading birds in the US!

Long-legged, long-toed purple gallinules cautiously cross water lilies and other floating vegetation in search of frogs and other invertebrates or to pick at tubers.

They love to Lurk in the marshes of the extreme southeastern U.S. lives one of the most vividly colored birds in all of North America. Purple Gallinules have a color scheme that fits surprisingly well with tropical and subtropical wetlands.

They frequently fly short distances, and long golden legs and massive feet allow them to move around on lily pads. Immature wings are drab olive and generally buff. Usually discovered along and have loud calls similar to common gallinules.

The Whooping Crane is the tallest and rarest crane species in North America. Except for the black and red markings on their cheeks and the black tips on their wings, which are only visible when the wings are extended, whooping cranes are nearly covered in white feathers.

A red skin patch on the forehead, a black “mustache,” black legs, and black wing tips visible when flying are characteristics of adult whooping cranes.

More about the crane

Limpkin’s long bill has a curved tip that helps them extract snails from their shells. The apple snail is the primary food source, and they scour bodies of water in search of them.

They’re famous for their nighttime shrieks, which can send chills down your spine. As a result, they have earned the nickname “weeping birds.”