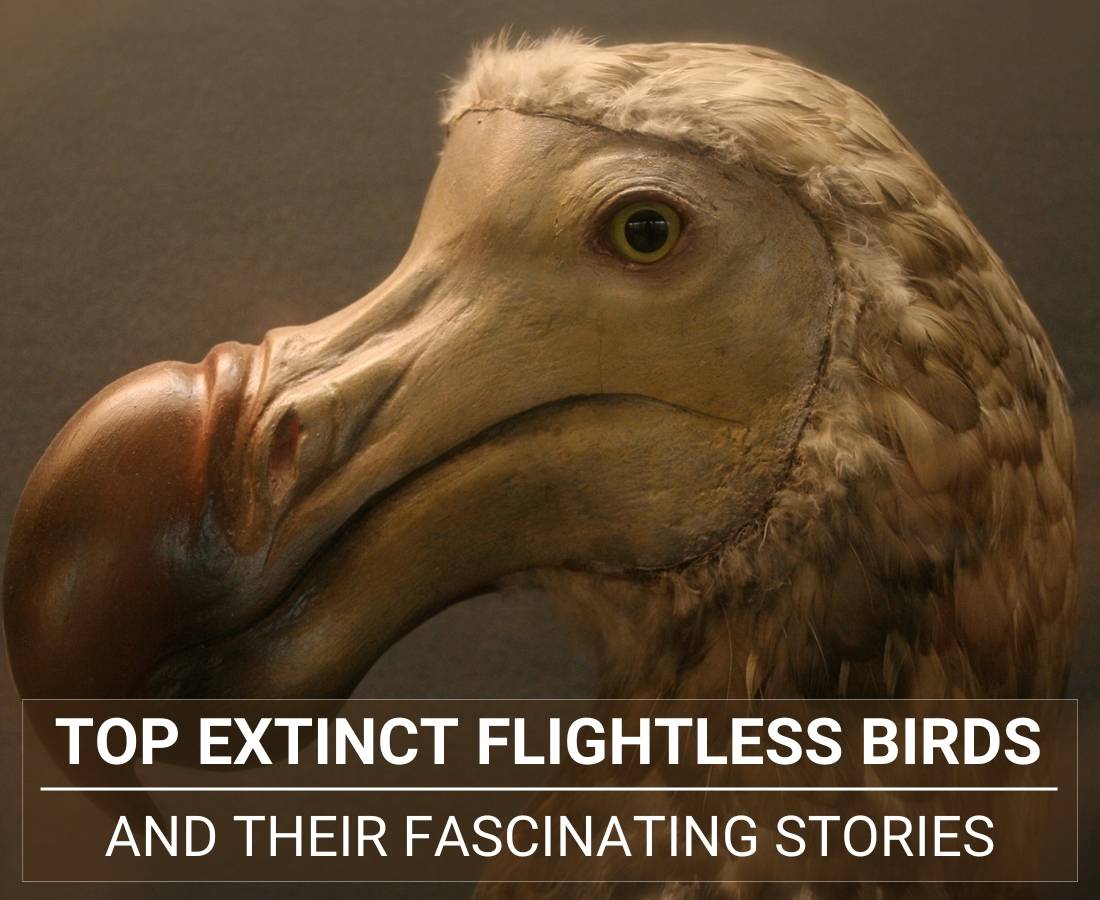 The world is home to many birds, but some species are now extinct. Flightless birds were particularly vulnerable to human activity, and many died after being hunted or having their habitat destroyed.

Some examples of these birds include the dodo, passenger pigeon, and great auk. Although we can’t bring them back, we can learn from our mistakes and work to protect the birds that are still here.

In this article, you’ll find some of the most fascinating flightless birds that have gone extinct.

“Extinction is the rule. Survival is the exception.”

The Dodo bird is one of the most well-known extinct flightless birds. The last known sighting of a Dodo was in the early 1600s, and the bird is believed to have become extinct by the late 1600s.

The Dodo was a native of the island of Mauritius and is thought to have descended from a pigeon species. The Dodo was a large bird weighing up to 23 kg and measuring up to 1 m in height.

The bird had a large beak, and its feathers were grey and white. The Dodo was an omnivore and fed on fruits, nuts, seeds, insects, and small animals.

The Dodo became extinct due to several factors, including hunting by humans and introduced animals such as pigs and rats. The Dodo was also impacted by habitat loss as the island of Mauritius was cleared for agriculture.

The adzebill was a large, flightless bird that lived in New Zealand until it became extinct in the late 1800s. The adzebill was dark brown or black, with a long, thick bill curved downward at the tip. It had short legs and small wings, which it used to help it climb trees.

It was a heavily built bird with a long, curved beak that it used to feed on grubs and other invertebrates. The adzebill was also known to eat small mammals, birds, and even eggs.

Despite its size and strength, the adzebill was no match for humans. They were hunted for their meat and feathers, and their habitats were destroyed by deforestation.

For more information on this unique bird, check out this video!

The bush moa is an extinct flightless bird native to New Zealand. It was the last member of its family to become extinct, disappearing from the country almost 500 years ago.

Though little is known about their behavior and ecology, we know that they were hunted by Maori people and introduced to animals such as rats and stoats. Their main predators were likely large birds of prey, such as the harrier hawk.

Bush moas were a bit larger than a standard turkey. They had dark brown plumage and long legs adapted for running. Bush moas nested on the ground, laying two or three eggs simultaneously. Their diet is unknown, but they likely fed on insects, seeds, and berries.

The Dromornithidae were a family of large, flightless birds that lived in Australia from the Oligocene to the Pliocene epochs. The largest and best-known member of the family is Dromornis stirtoni, which stood 3m tall and weighed up to 500kg.

Most dromornithids were probably herbivores, although some may have been omnivorous or carnivorous.

“When the first humans reached Australia about 45,000 years ago, they quickly drove to extinction 90% of its large animals. This was the first significant impact that Homo sapiens had on the planet’s ecosystem. It was not the last.”

Although the Tasmanian emu was once abundant on the island of Tasmania, it is now extinct. The last known Tasmanian emu died in 1876.

The Tasmanian emu was a large bird, similar in size to the mainland Australian emu. The female was slightly smaller than the male.

Both sexes had dark brown feathers, with a paler area around the neck and head. The legs were long and strong, adapted for running over rough ground.

They fed on plants and insects and drank from waterholes. It nested on the ground, laying a clutch of eggs that were incubated by the female.

The Tasmanian emu became extinct because of hunting by European settlers and the destruction of its habitat.

The white swamphen is a species of flightless bird that was once widespread across Europe, Asia, and Africa. The last known wild individual was seen in Sudan in 1834.

Adults could reach up to 2 feet in length and weigh up to 2 pounds. They had long legs and necks, and their plumage was mostly white with black markings.

Titanis was a large, flightless bird that lived in North America during the Pliocene epoch. The last known Titanis bones were found in Texas, and it is believed that the species became extinct around 15,000 years ago (others believe that a more precise date refutes such a late date; all known Titanis fossils appear to be at least 2 million years old)

Titanis was a massive bird, with some estimates placing its height at over 4 – 6 ft. It had long legs and a long neck, and its beak was filled with sharp teeth. Titanis were probably predators, preying on smaller animals or perhaps even other birds.

Not much is known about the lifestyle of Titanis, but it is thought that these birds may have lived in small groups or pairs. Given their size and weight, it is likely that they were not very agile on land, making them easy prey for predators if they were not careful.

Terror birds or Phorusrhacids were the largest flightless birds to ever exist. Measuring up to 12 feet tall, these massive predators were at the top of the food chain in their South American habitat. Unfortunately, they went extinct around two million years ago, likely due to a combination of climate change and competition from other carnivores.

The downward curve from the tip of this beak suggests that it ripped the flesh off other animals. Many bird species with a similar feature are also carnivores, so it’s likely phorusrhacids were similarly inclined to eat meat as well before they evolved into their current form.

The last phorusrhacids went extinct over one million years before humans arrived.