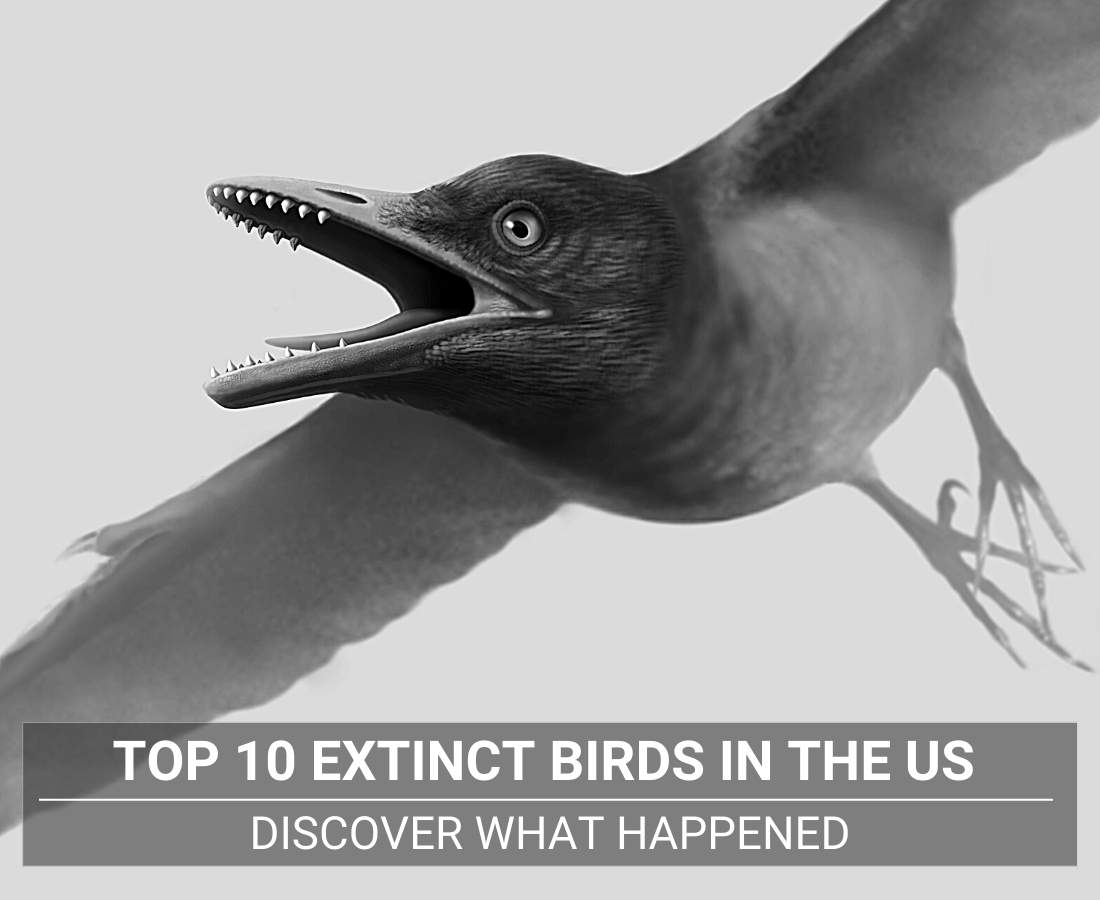 Birds are a common species of animals that seem to have trouble going extinct in the US. There are many reasons for this, such as environmental changes, predators, and human hunting.

Birds have been a common food source for people, often being the centerpiece for many dishes throughout US history. Unfortunately, as people, we haven’t always been as aware of the impact of our actions on the planet, especially regarding the total population of certain types of birds.

In this article, you’ll find 10 of the most common birds extinct in the US and how and why they became extinct.

“Extinction is the rule. Survival is the exception.”

The Carolina Parakeet (also called Carolina conure) was a native bird in the United States and the only parrot species found throughout this region. These birds became extinct in 1904 after the final member of the species passed away.

They lived in forests believed to be too heavily harvested and quickly, which caused the Carolina Parakeets to lose a large portion of their land. They were also pests to farmers, eating their crops and disrupting their land, which is why they were often killed. Both factors played a role in their extinction, almost solely due to human destruction.

The passenger pigeon went extinct in 1914. These birds were considered an ‘outbreak species,’ meaning they experienced explosions of population increase while later experiencing a fast decline in populations.

The primary reason these birds went extinct is due to human hunting. At one point, there were billions of these birds, but over half a century, they were completely wiped out by humans.

The last bird of the passenger pigeons died peacefully in the Cincinnati Zoo.

The last known record of the Great Auk was recorded in 1844. These birds had a similar appearance to the common penguin.

They were also very defenseless, which in part aided in their extinction. People ate these birds, selling their eggs and fats on the market. Their population greatly declined due to them being consumed too heavily, and a group of fishermen eventually killed them off.

The Labrador Duck was a small bird with a body length of about 16 inches. The plumage was largely brownish-black, with some white on the belly and underwings.

The bill was long and thin and curved slightly downward at the tip. The last known wild Labrador Duck was shot in 1878, and the last captive bird died in 1883. Their wetland habitats were destroyed due to development and pollution. They were also hunted for their meat and feathers.

It’s believed that the imperial woodpecker went fully extinct in the 1960s. There are several reasons why the Imperial Woodpecker may have gone extinct.

The last sightings of the Bachman’s warbler were recorded in the late 1980s. They were native birds to the southeast United States and also commonly found in Cuba.

These birds became extinct due to deforestation and drained their habitat’s channelization. Especially in Cuba, large portions of their land were destroyed to make space for their booming sugarcane production.

The Great Toothed Diver, or Hesperornis, is a species of bird that lived more than 65 million years ago. These birds were the last species to have teeth, as seen in the fossils found in the United States.

There is no known reason why these birds went extinct, but it is believed to have been some time after the crustacean period.

The Slender-Billed Curlew was a species of bird endemic to the Aleutian Islands. It had a black head and neck, with a white “collar” around it. The rest of its body was brownish-gray in color.

The Curlew’s bill was long and curved, and it had long legs adapted for wading in water. The last known individual of this species was seen in 1852, and it is now presumed to be extinct.

This species inhabited marshy areas and wet meadows on the Aleutian Islands. It is thought that the decline of this species was due to habitat loss and degradation, as well as hunting pressure.

The males had dark plumage with white stripes on their wings, while the females were brownish-gray with white spotting. The birds were named for their habitat – heathland – a shrubby, open landscape found in coastal areas.

The last known individual died in 1932, making the heath hen extinct. Wild cats are one of the main causes of their extinction, as well as poaching, fires, and natural disasters.

The dusky seaside sparrow was a small, plump bird with a short, rounded tail. Its head was large, and its bill was thick and slightly curved. The seaside sparrow was dark brown above and pale, with streaked breasts and sides. It had a white line above its eyes and a white stripe down its back.

The Seaside Sparrow inhabited salt marshes along North America’s Atlantic and Gulf coasts. The seaside sparrow’s habitat has been destroyed by human development.

But as development increased and natural habitats were lost to development, the sparrow’s range shrank. By 1970, the bird was only found in a few isolated areas in Florida. And by 1987, it was extinct.

Overall, it seems that humankind is one of the main causes of many of these birds’ extinction. Hopefully, these birds act as a reminder of the importance of respecting the land, animals, and the preservation of life.