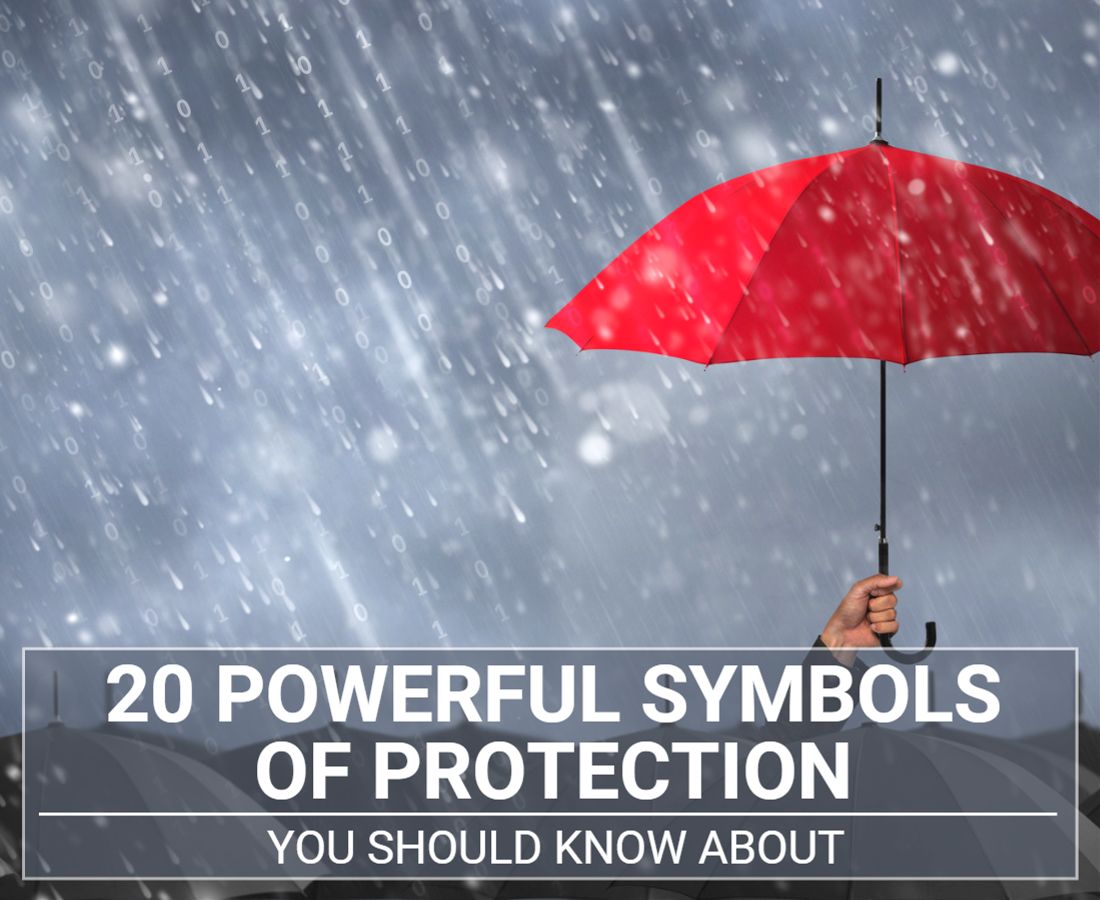 Symbols of Protection: You’re In Good Hands With These Signs

Throughout history, humans have appealed for protection from the things we fear and cannot control. As keeping our safety and that of those we love is always of the utmost importance, we tend to rely on symbols, both physical and divine, to keep us safe from harm.

Whether we seek spiritual guidance, personal safety, or the security of our families, we’ve compiled a list of the top symbols of protection to see if we can relax our guard whenever these objects are present.

Admired for their ability to live long, turtles are considered some of the most durable and endearing creatures around. Born with a distinct defensive feature, the oversized structure on their backs provides security and shelter for these creatures on a half-shell.

As turtles’ strong covering naturally guards them against predators, it doesn’t come as a surprise that many turtles as symbols of guardianship and protection.

It symbolizes safety and security. It is often used to represent locked doors or windows. This symbol can also be used to indicate that something is private or confidential.

Especially in software and the internet this symbol of protection is widely used. A lock icon is often used to indicate that a website is secure or that data is encrypted.

Widely recognized as fearsome creatures that bring chaos and destruction, legends tell us that dragons were mythical monsters that our ancestors sought to slay or tame. However, countless contemporary stories, including Mulan, The Lord of the Rings, and Game of Thrones, depict these fire-breathing beasts as symbols of power, abundance, and protection.

While several traditions see their presence as a representation of our unyielding and stubborn nature, the people in the Orient consider them our best companions when we find ourselves stuck in a difficult situation.

From helping attract the attention of a potential mate to providing them with a lift as they take flight, feathers are undoubtedly essential to a bird’s life. Coming in all sorts of colors, sizes, and shapes, it is a common and highly revered symbol of honor, freedom, and strength.

The feather’s ability to keep a bird warm and guard them against injury and harm has led many to view the feather as a symbol of protection.

Easily found in all deserts, the cactus is a unique plant that features a spiky appearance. Their ability to live for up to 200 years in the wild and withstand even the harshest conditions makes them a popular image of strength and endurance.

Featuring prickly and troublesome thorns designed to keep it from being a part of any hungry predator’s lunch, the cactus has come to symbolize prickly emotions, unconditional love, and absolute protection.

While many see the mistletoe as a festive plant that wins us a kiss from whoever’s at our front door, this flowering evergreen induces drowsiness and vomiting when consumed.

A popular symbol of fertility and love, its ability to cure a handful of illnesses such as arthritis, leprosy, and cancer makes it a potent image of care and protection.

Since all horses require regular hoof care, most of them use specially designed hoof wear to keep their feet balanced and protected. Providing restorative support essential to the horse’s gait, the horseshoe has been considered an emblem of protection and good fortune.

Featuring an otherworldly myth that dates back hundreds of years, legend has it that a blacksmith once tricked the devil into putting horseshoes on his hooves. Causing the evil one excruciating pain, the blacksmith made a pact with him that he would remove the shoe on the condition that the devil would never visit a home with a horseshoe on its front door again.

Despite having a superstitious lineage, the evil eye is a powerful totem that provides its bearer with more than just a fashion statement. Believed to bring about mental and physical illness, it has been used by different cultures as a symbol of protection against those who aim to cause harm or malevolence to others.

A charm that provides positive energy to anyone who wears it, it is believed to deflect any feelings of hatred, malice, or envy back to its origin.

Often referred to as a spider web charm, the dreamcatcher is an ancient symbol of protection most prevalent with the Native Americans. Known to keep negative energy at bay, it is perceived to protect us from bad dreams and the devil as we sleep.

Traditionally crafted using wooden hoops, handmade beads, threads, and feathers, it offers defensive symbolisms that go beyond it simply being an attractive gift. Believed to have been created by the spider woman Asibikaashi to protect small children and babies, it is often hung above beds and cribs. Popularly known as the Celtic love knot, the triquetra is an iconic symbol that offers deep spiritual significance and is often used in design and architecture. Adopted by various traditions, including pagans and Irish Christians, it consists of three overlying and interconnected curves that represent the triple moon goddess.

Believed to enhance feminine energy, it has long been considered a symbol of unity, fertility, and protection. It reminds us that, much like a mother, the triquetra is an assurance that we are constantly sheltered and safely kept away from harm.

Contrary to popular belief, the pentacle is nowhere near being used as a symbol for devil worship. An ancient symbol shaped as a five-pointed star, it represents the five elements, including earth, air, fire, water, and spirit. It is perceived to symbolize the fundamental ingredients from which mankind was created.

A revered image in various cultures, this mystical icon, which is seen as a symbol that boosts our quest for knowledge, holds protective powers that help drive away demons and negative forces.

Associated with a mighty and compassionate god from the heavens, the Eye of Horus is an ancient Egyptian symbol that brings forth positive messages of royalty, guardianship, and health. Legend tells us that Horus lost his eye after a series of battles against Seth for control of the netherworld. Its restoration by the Egyptian god Thoth made it a symbol of healing and protection.

The Eye of Horus is used by many in jewelry to keep them safe from others’ ill will. It is also often painted by fishermen and seafarers on their vessels to show their strong belief in the watchful and protective element it brings.

While its origins are deeply rooted in the Middle East, the hamsa is an ancient symbol that offers a host of symbolic meanings. It is considered a totem that brings happiness, health, and good fortune.

Several cultures use its protective elements to ward off ill intentions and negative forces from people’s resentful glares. Often referred to as the Hand of God, it represents the Divine’s ability to keep us safe from harm.

Simple and easy to understand, the image of crossed spears was used as an ancient symbol of protection during times of war. Known to possess powers that help ward off the effects of the evil eye, the intersection of these weapons is meant to put up a symbolic barrier against adversaries.

An image that can easily be translated to “do not pass,” indicates how we wish our challenges to remain at a distance. The crossed spears also provide us with spiritual armor to peacefully go through our hardships.

Whether you are a knight in shining armor, a race car driver, or a football player rushing for a touchdown, the helmet will always be a significant symbol of safety and protection.

Considered a must-have, particularly for those who participate in activities with a high potential for collision, it provides proper cushioning that alleviates the effects of an otherwise fatal crash.

Utilized to avoid the damage that swords, axes, and arrows cause, the shield is considered a strong overlapping wall that shelters us from negative energy, falsehoods, and evil.

Often depicted as fearsome statues, many of us wonder why age-old cathedrals and churches feature grotesque-looking monsters. Recognized simply as fanciful gutters, not only were gargoyles used to get rid of excessive rainwater but they were also believed to have the ability to fend off evil.

Featuring frightful faces that possess the power to scare visitors and onlookers away, these useful and symbolic structures are crafted to protect buildings and houses of worship.

Considered a female fashion accessory that represents affluence and wealth, the umbrella is perhaps one of the handiest symbols of protection we can find. Taking its name from the Latin word “umbra,” which translates to shadow or shade, it was initially created to protect the royals from the warm and harmful rays of the sun.

Known to provide us shelter each time the rain comes, the umbrella serves as our protective barrier from obstacles, sufferings, and illnesses.

While it once invoked feelings of fear, panic, and separation, the face mask has come a long way as it has come to symbolize unity and protection. Primarily used in medical facilities, its use as a layer of defense against harmful agents such as germs, viruses, and pollution makes this often divisive fabric an image of guardianship, safety, and care.

Going by the motto “To Serve and Protect,” police forces from across the world are one of the most overlooked symbols of protection.

Their goal of keeping safety and order in the streets, their willingness to sacrifice and assist others, and their ability to defend you from bad people make them a powerful image of guardianship and care.

Throughout history, Christians have lived with the notion that our guardian angels stay on our side from the time we were baptized. Believed to be assigned to a particular person to help keep danger away and ensure our salvation, these divine beings symbolize security, care, and protection.

Regarded as admired celestial beings whose presence is widely acknowledged in Holy Scripture, our guardian angels serve as watchful protectors that work in ways to bring us closer to God.

PS: there are also birds that represent protection.