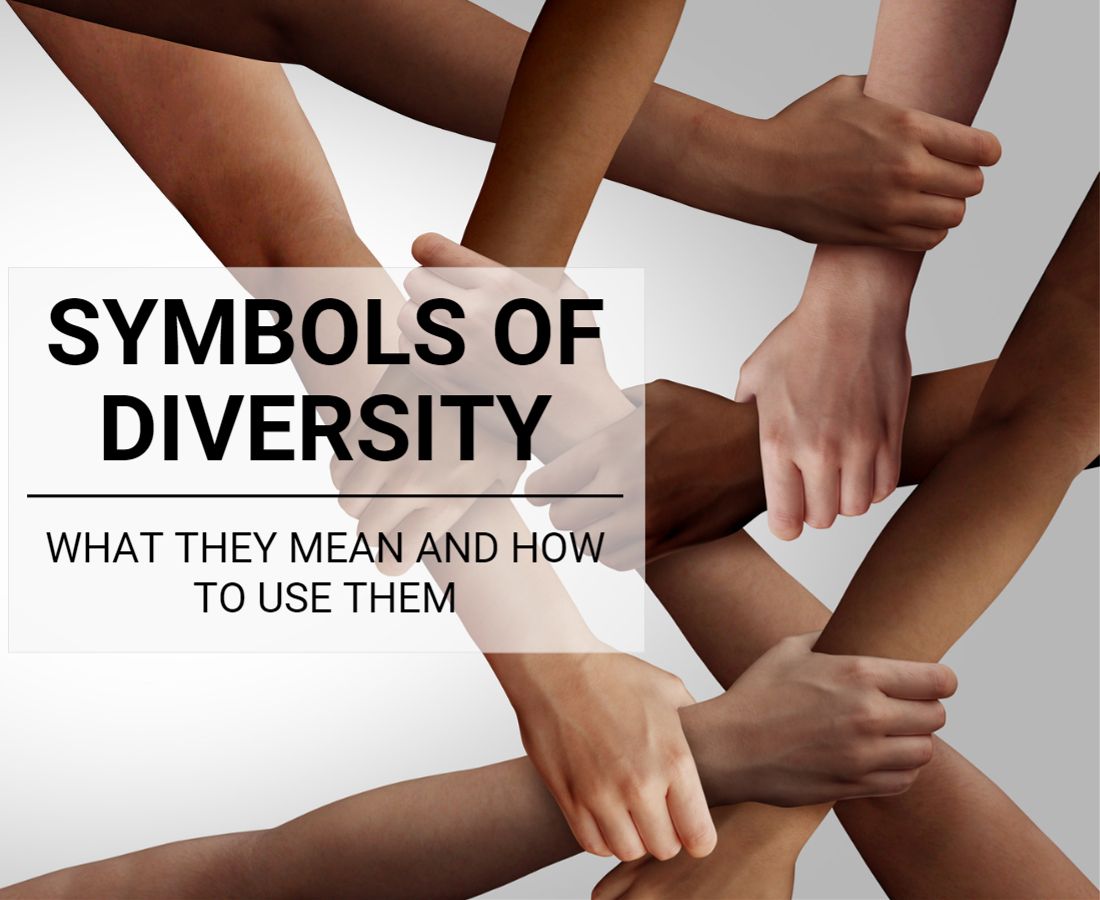 As we step out into the world every day, it is natural to come into contact with people from different walks of life. Diversity is a broad term that allows us to embrace each individual’s beliefs, values, norms, and behaviors.

Known to provide each of us with a sense of belonging to a group in society, let’s find out how these symbols of diversity take shape and affect the various aspects of our lives.

“Before God, we are all equally wise, and equally foolish.”

The rainbow flag is a symbol that celebrates the beauty of diversity. It has been around since 1978 when it was introduced as a symbol for lesbian and gay rights in San Francisco. Over time, it has also come to represent transgender, intersex, and queer rights, making it a symbol of inclusivity for the LGBT+ community.

A flag that consists of the colors of the rainbow, the rainbow flag is an eye-catching symbol representing various ideas such as life, healing, harmony, and the soul. While it has inspired many to stay upbeat and optimistic, several cultures see this stunning occurrence as a symbol of diversity and inclusivity and an encompassing image of friendship and love.

An iconic symbol of pride for the LGBTQ+ community, it teaches us to be more understanding of our many differences.

The transgender symbol links the internationally accepted symbols for males and females. It has been a rallying point to inspire diversity, pride, and freedom.

Characterized by a circle to signify how everyone should be included, various cultures believe that it represents compassion, honor, integrity, and the wholeness of society.

The human rights flag is one of the most recognizable symbols of the LGBTQ+ community (sometimes also referred to as LGBT community). It represents the universality of human rights and the need for everyone to treat each other with dignity and respect.

Unveiled in 1995, people used it to spread awareness about the plight of countless individuals who experienced hate and intolerance. The Human Rights Flag also increases our knowledge about the continuous fight for equality in every corner of the planet.

A popular image that once reminded nations about the importance of nuclear disarmament, the peace symbol tells us to remain calm, to think rationally, and to keep ourselves grounded.

A figure that led many to see unity in diversity, this widely used symbol shows how we can achieve peace by showing tolerance of our cultural, physical, social, religious, and political differences.

Many have seen the dove as a symbol of purity, innocence, and peace for thousands of years. Found in almost every corner of the planet, these gentle birds indicate beauty in gentleness, inclusivity, and diversity.

The dove often flies in to remind us that the things that make each of our cultures different have the power to both unify and make us stand out. Often the dove stands for unity in diversity, peace, and hope.

A surprisingly gorgeous plant that grows in lakes, ponds, and mud, the lotus flower is a widely recognized symbol of strength, spiritual enlightenment, and resilience. However, several cultures see this flower as a symbol of peace, diversity, and compassion.

In China, where the lotus name sounds like a fusion between the words connection and peace, this flower tells us that it is possible to realize a peaceful union despite our many differences.

In the Native American culture, the lotus flower and diversity stand for life, rebirth and joy. They interpret it as a reminder that whatever our differences are we should be kind to each other and see the good in every person we encounter.

“No culture can live, if it attempts to be exclusive.”

A Sanskrit word that translates to “circle” or “spheric,” a mandala is believed to represent the different aspects of the universe within a square division and organized towards a central point. Traditionally produced on cloth, it shows that while we have all kinds of differences, we can work together towards a particular goal.

Often used as an instrument of meditation and prayer, it is known for its ability to turn our sufferings into joy and happiness.

Traditionally used in artwork and decorations, the interwoven patterns of Celtic knots symbolize our capacity to come together and function as one. Forming loops that have no start or finish, these intricately crafted works were later considered an indication of friendship, diversity, and love.

As Celtic knots are widely associated with eternity, they remind us that we cannot break the importance of creating bonds regardless of how different we are from each other.

Often referred to as the Sacred Hoop or Sun Dance Circle, the medicine wheel is an ancient Native American symbol that indicates all knowledge of the universe.

Native American society was based on ideas of inclusivity, acceptance, and diversity. It is believed that the wheel provided a platform for its people to embrace different points of view and experience the strength of unity in diversity. Seen as a representation of how we can create harmony between our differences, this symbol also encourages us to pause and reflect on our progress toward peace.

Acting as a strong source of ideas on our physical and psychological health, it shows how achieving harmony in the face of diversity contributes to our overall well-being.

Believed to be the principal residence of the Greek gods, Mount Olympus is a highly revered place where the ancient Greeks interacted, heard stories, and worshipped their primary gods and goddesses. It tells us that while the most powerful deities had diverse views and ideas, they all worked harmoniously toward the good of the Greek people.

The Greek gods were a polytheistic bunch and therefore an early example of religious and cultural diversity. They understood that the power of unity is greater than the sum of its parts, and this is a lesson we can still learn from today.

The Olympic logo symbolizes the five continents and the coming together of athletes. It is perhaps one of the most endearing symbols of diversity. Consisting of rings interlocked from left to right, it teaches us to respect the abundant diversity of different cultures and acknowledge the strength and talent of athletes worldwide.

“Strength lies in differences, not in similarities.”

Perceived to be unique to every person, it’s not surprising that several cultures see the fingerprint as a significant symbol of distinctiveness and diversity. Having long been recognized as the best way to identify people, it reminds us how we can use our differences to achieve our maximum potential by being critical of our biases.

Ancient fingerprints have been preserved for thousands of years, and the importance of being symbols of diversity has been around just as long. The fingerprint teaches us how a better understanding of our distinctness brings unity through diversity. Even though there are some poor people born without fingerprints, it is essential to remember that diversity is the key to success.

Recognized as the most populous city in the US, it’s easy to see why New York City and its more than 8 million residents are among the most significant symbols of diversity. A “concrete jungle where dreams are made,” according to a popular song, New York, the premier gateway for legal immigration to the US, features one of the most diverse lists of people from various cultures and traditions.

In New York, there are an estimated 800 different languages spoken, which further accentuates the city’s unmatched cultural range. New York City is a symbol of diversity for the US and a reminder that it is possible to live harmoniously and support one another despite our differences.

Presently made up of 193 member states, there is no better organization to symbolize diversity than the United Nations. Created to maintain the world’s peace and security, it is the only institution where the world’s nations gather to discuss common issues and find solutions that suit the needs of everyone.

The responsibilities of the United Nations are to protect human rights, promote humanitarian aid and development, facilitate international cooperation among nations, and act as a mediator in resolving conflicts. It is a perfect example of how diversity can help foster peace and understanding.

From a raging green monster to a smooth yet dangerous undercover spy, Marvel’s Avengers features some of the most diverse superheroes the world has ever known. Seen as the modern counterparts of the heroes of ancient Greece, they remind us how we can do great things if we put together our out-of-this-world gifts and talents.

All these mentioned remind us that, despite our differences, we are united in the goal of advancing a better world. Diversity is a powerful tool that can bring about greatness and unity rather than division and strife. Let us use these symbols as reminders to embrace our differences, work together harmoniously, and strive for excellence. Together we can create a world of peace and harmony.

What is the symbol for inclusion?

The symbol for inclusion is a circle, often depicted with many hands of different colors reaching out from the center.

This symbolizes unity, acceptance, and respect for all people regardless of their differences. It is an important reminder that we are better off when we come together as one united human race.

If you remember maths in school you might remember the symbol for inclusion “⊆” is read as: “…is included in…” or “…is a subset of…”.

This symbol shows that everyone, regardless of their backgrounds and differences, is included in the circle of diversity. This symbol represents the idea of belonging, for all people are part of one big family.

The inclusion symbol is a powerful reminder to show kindness and acceptance toward other cultures, racial groups, and religious beliefs in order to create a unified world.

What color represents diversity and inclusion?

Purple signifies creativity, independence, strength, and courage. Together these colors represent the wide range of unique experiences that make up our diverse population.

What is cultural diversity and why is it important?

Cultural diversity is the celebration of different cultures within a given society. It acknowledges and celebrates the unique values, beliefs, customs, languages, and religions of each group.

This appreciation for cultural differences can help to foster mutual understanding and respect across cultures, creating an environment of cooperation and inclusion that benefits everyone.

Cultural diversity is important because it helps create understanding and tolerance for those who are different than us, leading to more meaningful conversations and ultimately a stronger society.