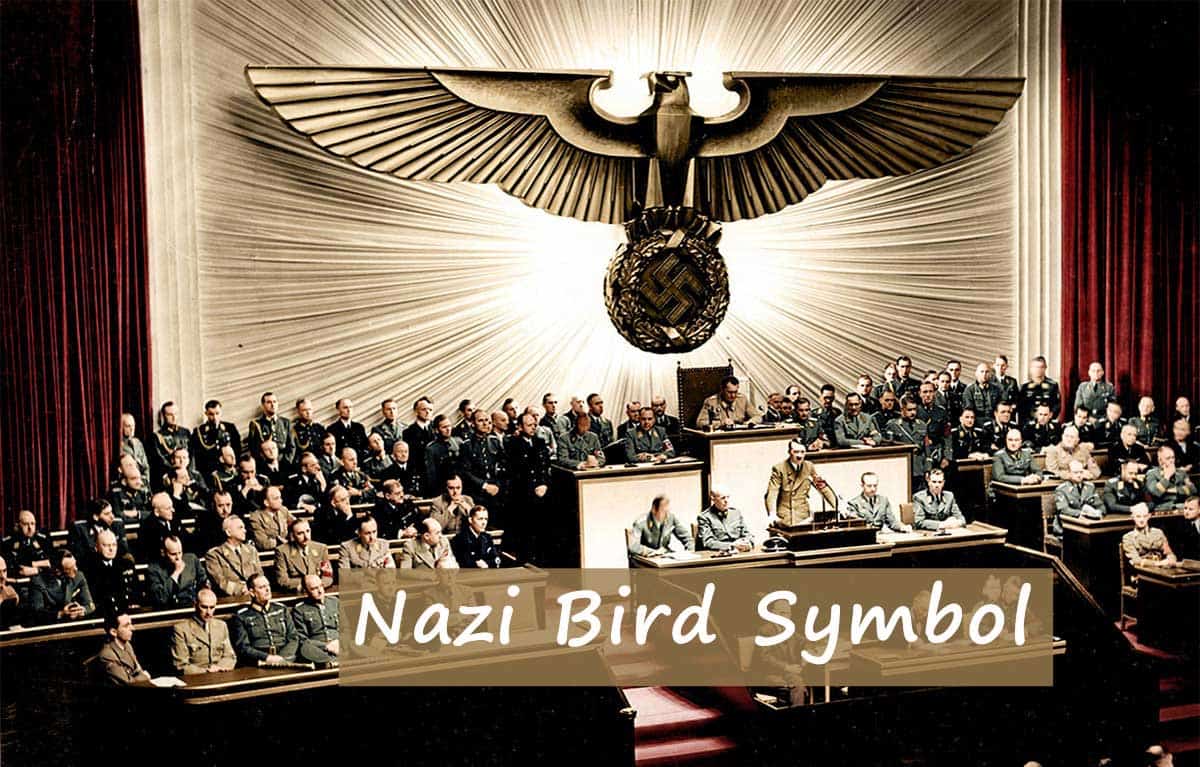 The governments of Nazi Germany ordered, organized, and condoned a substantial number of war crimes in World War II and committed the biggest genocide in history. The most notable of these is the Holocaust in which millions of Jews and Romani were systematically murdered. Millions of civilians and prisoners of war also died as a result of German abuse, mistreatment, and deliberate starvation policies in those two conflicts. The Nazi government under the leadership of the “Führer” (Hitler), was without a doubt the most gruesome regime ever existed. This article discusses the symbolism of birds having been used by the Nazi regime.

The iconic Nazi bird symbol is one of the most well-known pieces of Third Reich iconography. Used throughout the Third Reich in both official documentation and civilian patriotic symbolism, it became one of Nazi Germany’s most recognizable visual motifs. Taking its origins in the historic German eagle, the Third Reich design grew in prominence alongside the party itself, eventually becoming part of the official national symbolism and being used on buildings and emblems across the territory ruled and administered by the Nazi Party. Its similarities with the historic German eagle can however be a cause of confusion and as with most Nazi-era symbols and icons, it is extremely controversial to use in a non-academic environment today.

The Nazi bird symbol takes its roots in the historic German eagle, or “Reichsadler”. Reichsadler translates to “Imperial Eagle” and its usage as a symbol of the German people can be traced back to the days of the Holy Roman Empire, with evidence of its use dating back to the late 12th century. Being that it has been a symbol of the German ethnic group for centuries, and with Adolf Hitler, and the Nazi party in general’s common return and up-keep of older Germanic symbolism, it is no surprise that the German Imperial Eagle ended up being used by the Third Reich as one of their main pieces of iconography. While changing many times throughout its history before this, the Third Reich design is one of the most unique designs the symbol has seen, with the Nazi symbol being a highly stylized rendition of the Reichsadler.

The Reichsadler in its many medieval renditions has mainly been, as many national and regional icons of the medieval era are, more crudely drawn, and generally has more natural and flowing lines within its design. The Third Reich version of the Imperial Eagle is in contrast much more geometric and blunt within its design, with many straight lines and harsh corners. The Third Reich Imperial Eagle also does not make use of the frequently seen yellow shield background that is common for the medieval Imperial Eagles but instead has no backdrop at all, standing on its own. As well as this, the Third Reich design also has an added stylized oak wreath that the eagle lays its claws onto at the bottom. Within the oak wreath, there is also a Hakenkreuz or “Hooked Cross”, which is more commonly known as the Nazi Swastika.

The Nazi Reichsadler was reportedly designed by Hitler himself along with many other Nazi bird symbols and was officially adopted along with other Nazi symbolism on the 5th November 1935 after the regulation “concerning the national emblem of the Reich” was made by Adolf Hitler, which made the party symbol of the National Socialist German Worker’s Party the symbol of the nation as well. Hitler later made an addition to this regulation on the 7th March 1936, outlining the official design of the symbol and how it should be used. Before this legislation, the Third Reich used the Weimar Republic’s coat of arms for its own too. The Nazi Party’s symbol and the Third Reich’s national emblem are near-identical but can be differentiated by which way the eagle’s head is facing. For the symbol of the National Socialist German Worker’s Party, which was called the “Parteiadler”, the eagle is looking over its left shoulder, to what would be right to the viewer, whereas for the national Reichsadler this is reversed, the eagle looks over its right shoulder to what would be left for the viewer.

After its implementation as a piece of national iconography, the Nazi bird symbol was used across the nation for a wide array of reasons. Almost all government buildings would have a large Reichsadler either above the main entrance or prop up on the roof, with many other associated organizations also adopting it. It was also used heavily in the army, with basically all Third Reich army uniforms either having the Imperial Eagle embodied onto it or worn as a metal pin on the chest. The party version of the eagle also appeared on all of the insignia for the different ranks within the Nazi Party in their final pattern used from 1939, except for the very lowest rank, which was reserved for non-party members. The Third Reich’s helmet, like most pieces of Nazi uniform, also features a Reichsadler, however, this was a differently styled variant. More closely resembling the classical medieval Reichsadler, this one was set upon a black crest and had its wings pointing downwards instead of straight out. It also lacked the oak wreath but had a more detailed body, resembling a variant of the Parteiadler.

The Imperial Eagle has been a symbol of the German ethnic group since over a millennium ago, with the oldest eagle-related symbolism coming from the 11th century, with more recognizable Reichsadler coming in at later dates. The German Imperial Eagle has gone through many designs during its time as a symbol of ethnic representation, however, some themes are commonly repeated throughout its history giving it a fairly uniform set of characteristics to watch out for to spot a German Imperial Eagle design. For example, the eagles on the coat of arms have always been black, and never any other color, although in some variations they have other emblems on them. As well as this a yellow background is the most common for the backing shield if the design has one, with the arms rarely having anything but block yellow used for this colored background.

The German eagle is derived from the Roman eagle symbol, known as the “Aquila”, Latin for eagle, which was also symbolic eagle that drew a representation of imperial might and were used in public Roman iconography and on the battlefield via a standard that the battalion of soldiers traveled with, are were revered as extremely important in a Roman society with the Romans even going to great lengths to recover the Aquila standards of lost Roman Legions.

The Reichsadler’s origins within the Holy Roman Empire can also be found from a very early date, with some iconography from as early as the 11th century displaying things like eagle specters and eagles on coins. The eagle was used as a powerful insignia of imperial power, used to distinguish the emperor’s central leadership over the many Imperial states within the Holy Roman Empire and by the mid-13th century, it had become a heraldic charge depicted on many different coats of arms.

Many different Holy Roman Emperors changed the coat of arms slightly to suit their wish and it went through many different variations, as did the Holy Roman Empire itself, with many designs featuring a two-headed eagle, or an eagle with other coats of arms positioned on its chest or wings. Almost every variation of Germany throughout its history has utilized some variation of the Germanic Imperial Eagle in its national and patriotic iconography, with it still being used in Germany and Austria, as well as some former imperial cities, up until the present day.

Is the German Eagle Offensive?

With Germany’s turbulent history and with the symbol’s iconic and mostly unchanged look throughout history, there have been many negatively viewed regimes and campaigns that have the eagle linked to them, most notable obviously being the Third Reich’s version which was used heavily in Nazi imagery and propaganda. This has obviously caused some questions about the status and relevance of the symbol in the modern-day, however, generally the different variations of the eagle get considered different entities from each other who just happen to share common motifs and a common history.

Like with most Third Reich symbolism, Germany, as well as a host of other countries, have a strict ban on the Nazi variation of the Reichsadler and where it can be used, with most non-academic usage of the symbol completely outlawed. There do however remain some Nazi-era imperial eagles within Germany, albeit with their Swastikas removed. Furthermore, the other variations of the Germanic Imperial Eagle are still widely used in Germany, and Germany’s own coat of arms features a modern version of the classical medieval Reichsadler. Austria also uses an imperial eagle on their coat of arms, however, to avoid association to the Nazi version that the term “Reichsadler” has commonly come to refer to, both Austria and Germany now call their coat of arms the “Bundesadler”, which means the Federal Eagle.

In any case, one can say that any symbolism of birds the Nazis used can be seen as Birds of Death.

The Nazi symbol of the eagle became known under many different names due to its many different styles and varieties. A popular nickname in English for the symbol is the “Iron Eagle” symbol, which is especially used in association with the many large iron models that were placed on top of major buildings during the Nazi regime. This name is also especially popular and still used by modern-day English-speaking Neo-Nazis. Any Nazi bird symbolism is obviously the opposite of any bird symbolizing love and life.