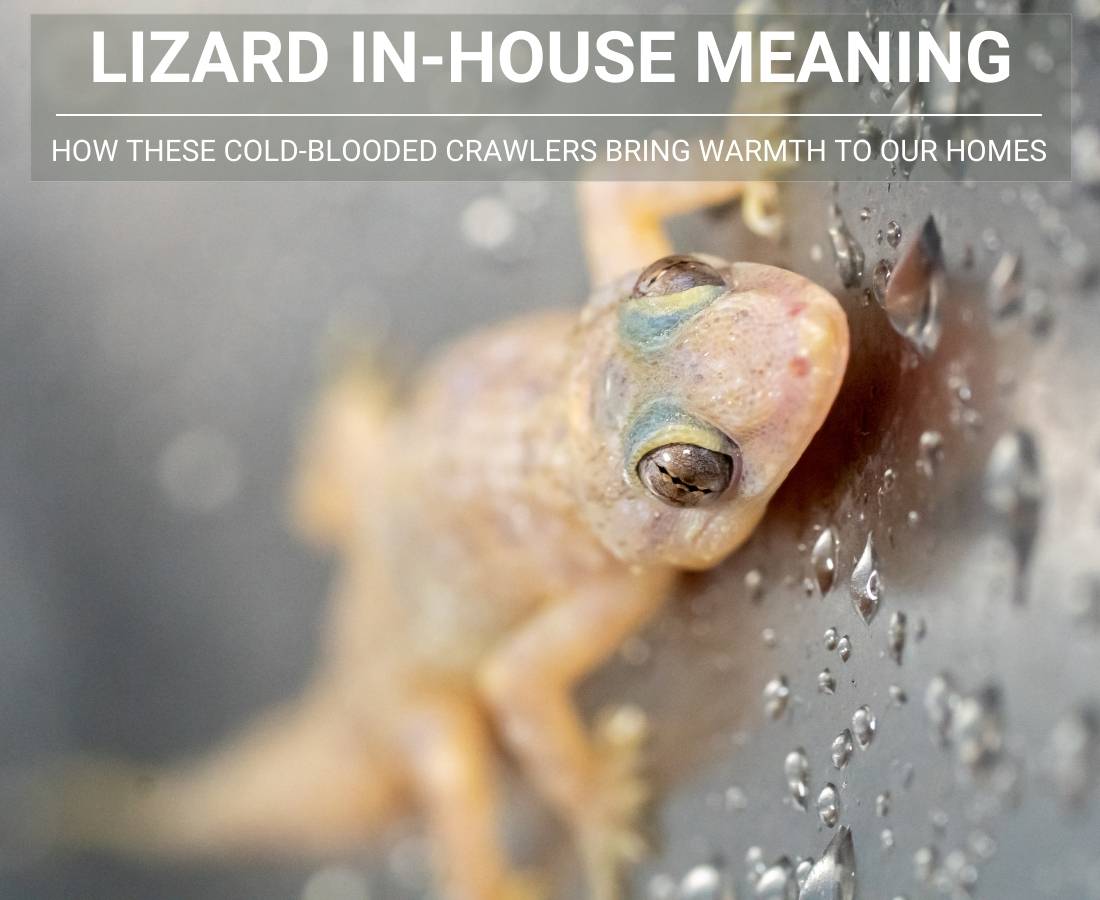 Lizard In-House Meaning: How These Cold-Blooded Crawlers Bring Warmth To Our Homes

As evidence shows that they came into existence about two hundred million years ago, lizards are some of the oldest and most interesting creatures we regularly encounter. Believed to be direct descendants of dinosaurs, it doesn’t come as a surprise that a handful of traditions see them as a symbol of adaptability and wisdom.

While its elusive nature has been the focus of its many symbolic meanings, its presence in our homes is seen to carry a distinct spiritual significance. Widely recognized as a symbol of rebirth and resurrection, let’s jump into what the presence of a lizard in your house means.

“Lizards of every temper, style, and color dwell here, seemingly as happy and companionable as the birds and squirrels.”

The spiritual meaning of the lizard

Their ability to lose their tails to shake off a predator and regrow them in a different color indicates our need for protection and our willingness to go through periods of transformation.

A symbol of a friend for many and a foe for some, here’s how the lizard is seen in different traditions.

Widely recognized as an omen of growth and success, the lizard was immaculately treated by these fearsome warriors with high reverence. The nocturnal nature of most house lizards led the Celtics to associate them with dreams and things that keep us awake at night. As one popular legend has evaki, the goddess of night and day would lovingly steal sleep from the lizard’s eyes and bestow it to those who are troubled and restless.

Highly respected for symbolizing rebirth and rejuvenation, some Native American tribes see the presence of lizards as a positive sign for playing a significant role in many of their traditions. The extremely noxious breath of the Gila Monster gave birth to the belief of the Apache Indians that its mere breath is fatal to humans. However, the Navajo tribe’s use of this lizard’s saliva for a range of medicinal purposes redeems it as a figure of healing and protection.

Throughout history, the lizard has been recognized for playing a critical role in Greek folklore and mythology. A popular symbol of humility and compassion, the Greeks believed that their appearance is meant to teach us about the value of being more understanding of the feelings of others.

One story tells us how, on her long search for her daughter Persephone, the goddess of nature, Demeter stumbled upon Misme, who offered the deity a drink. Exhausted and extremely thirsty, she finished her drink in one fell swoop, which led Misme’s son Ascalabus to mock her by serving the goddess additional drinks. Angered, Demeter transformed the boy into a lizard to teach him a lesson.

While other cultures saw lizards as a positive omen that heralds the arrival of good fortune, several African tribes view them as divine messengers that brought the idea of eternal life to humans.

Legend has it that God once asked a lizard and a chameleon to bring an important message from the heavens back to our world. While the chameleon took its time in delivering his message of immortality, the lizard painstakingly kept to his task and brought the idea of death upon us. The chameleon’s failure to convey his message first made death our natural fate.

“The long days seduce all thought away, and we lie like the lizards in the sun, postponing our lives indefinitely.”

What does a lizard in the house symbolize?

Often seen scampering on the ceilings and walls of our homes, many of us see the lizard as a guardian that brings forth prosperity and abundance. Relatively shy yet friendly, here’s what it means when we see a lizard in the house.

The lizard is known as a creature that thrives well in the wild. Its presence inspires us to be more compliant and flexible, for it will help us handle stress effectively even during the most trying circumstances.

Lizards are commonly seen to rapidly stick their tongues out to sniff for signs of food or danger, reminding us to be more aware of the threats that lurk in our environment.

Due to its habit of voluntarily losing its tail to confuse an approaching predator, the lizard tells us how we should use our talents to our advantage.

While cutting off its tail helps the lizard evade its predators, it symbolizes the presence of someone deceitful in our home and our need to be more watchful.

Their ability to grow their tails back, sometimes in a different color, signifies our capacity to snap out of our bad habits and transform into the best versions of ourselves.

The lizard’s unique ability to cut off and regrow its tail tells us that although there may be times when we need to make the supreme sacrifice, it almost always leads to future rewards.

“I am the Lizard King, I can do anything!”

Considered a sign of good fortune in various traditions, the appearance of lizards in the house implies that a period of comfort and abundance is about to arrive.

Often coming at a time when things are difficult, they remind us to see things from a better perspective and to keep on living with purpose and meaning.

Commonly seen creeping close to the surface, their appearance is a reminder for us to always stay humble and to keep both our feet on the ground.

As lizards also shed their skin, they motivate us to get rid of habits that hamper our growth and to develop new ones that define our life goals and values.

How can you tell if a lizard is trying to send you a message?

If the lizard was found in the kitchen it could mean that someone in the family is eating too much processed food and they need to make a change.

The living room means that someone is not spending enough time relaxing and they need to find some balance in their life.

Wherever you found the lizard, take a moment to meditate on that area of your life and see if there’s anything you need to change.

Why do lizards come into your house and how do you get rid of them?

There are many reasons why lizards might come into your house. They could be looking for food, shelter, or a mate. If you have a lizard in your house, it’s important to figure out why it’s there so you can get rid of it if you want to.

The best and first thing to do is to figure out how it got into your house in the first place. Once you know how it got in, you can block the opening so it can’t get back in. You should also remove any food or water sources that might be attracting the lizard.

If you have a pet, make sure to keep it away from the lizard. Lizards can carry diseases that can be harmful to your pet.

If you’re trying to get rid of a lizard in your house, there are a few things you can do. You can try to catch it and release it outside or you can also use a lizard trap. These traps usually have food or water inside them, which lure the lizards in.

Once the lizard is inside, the trap will prevent it from getting out. You can also use lizard repellent to keep lizards away.

While they are not the most charming of creatures, lizards offer a host of meaningful messages that have a great impact on our lives. Add to that the favorable and calm demeanor that they bring, then there simply is no reason not to welcome the lizard in-house meaning.

Read our article, in case you have found a dead lizard and want to know what it means.