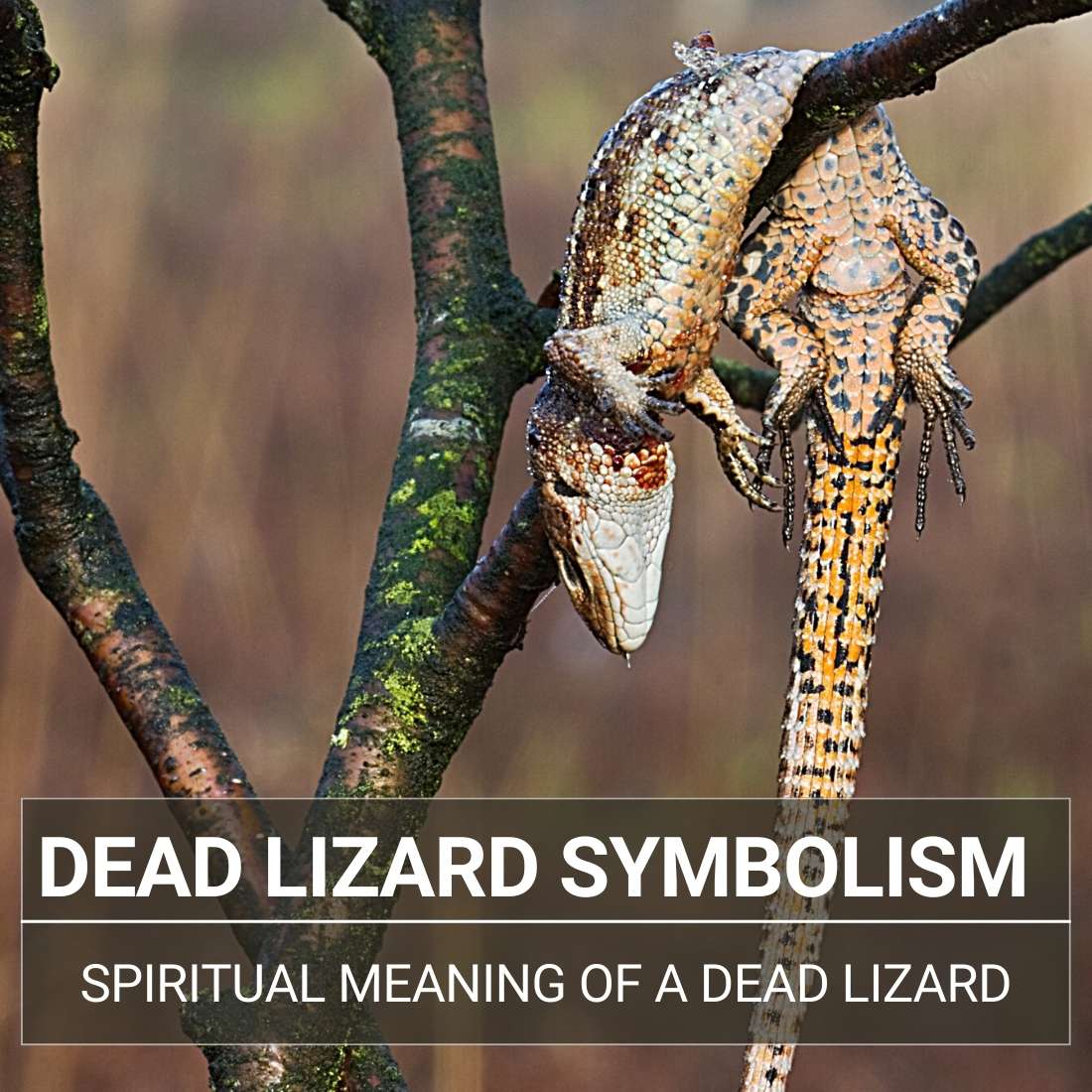 When you see a dead lizard, what is the first thing that comes to mind? For most people, the sight of a dead lizard is ghastly and gross. But did you know that there is dead lizard symbolism and spiritual meaning behind this often-overlooked creature? Dead lizards can be interpreted as messengers from the spiritual world, delivering important messages about change and transformation.

“I am the Lizard King. I can do anything!”

What does a dead lizard symbolize?

Seeing a dead animal is never pleasant. It reminds us of our mortality and makes us think about the purpose of our existence.

Although you have every right to feel distressed because of this encounter, you should remember that people and animals are also spiritual beings. Therefore, the hidden meaning of seeing a dead lizard often transcends earthly feelings and logic.

Let go of every preconceived notion you have about death and keep reading to learn more about the spiritual significance of lizards. This text will provide clues for you to navigate your spiritual journey.

Lizards symbolize regeneration and resilience in the physical, but also the spiritual world. They are extremely adaptable animals that can survive in all, but the most extreme conditions.

When you have the lizard coming into your life (or into your house) as a spirit animal, you are filled with determination to have everything work according to your wish. You also know how to give up all those things that do not really matter in your life. It can help you draw more positive energies into your life. Read more about the lizard’s spiritual meaning.

The fact that you saw a dead lizard can be a bit unsettling since it makes one wonder if such an adaptable creature is found dead, what is left for the rest of us?

“You’ve got to get out and pray to the sky to appreciate the sunshine; otherwise you’re just a lizard standing there with the sun shining on you.”

Lizards, just like their fellow reptiles, the snakes, are considered to be symbols of resurrection. This is mainly due to their extreme survival technique which is autotomy. This makes them able to shed their wounded tail and grow it back in a matter of weeks.

As symbols of resurrection, they are recurring subjects in Christianity.

You should consider the dead lizard as a sign that we are all part of the cycle of life. By being mortal, we are constantly in motion. Death is nothing but a new beginning.

Symbol of the underworld

Lizards belong to the category of earthly creatures as far as the classification according to the four classical elements goes.

Their ability to camouflage only reinforces the idea that the lizards are one with earth. They easily match the color of their skin to their surroundings which gives them almost ghostly, invisible features.

Moreover, their creeping, unpredictable movements make them physically connected to the ground and make them appear as if they can communicate with the underworld.

The dead lizard symbolism in this context can mean the death of your strong bond with earthly, material things. You have turned your focus towards your spiritual side. You are digging deeper into the meaning of life.

Get ready to live life to the fullest because as you have probably realized, our bodies are nothing but vessels for our souls. Stay attuned to your higher self and you will inevitably have a better quality of life.

Spiritual meaning of a dead lizard

What led you on the same path as this unfortunate creature and what is the deeper spiritual meaning behind this experience?

Lizards can survive under almost every weather condition. One thing they cannot live without, however, is the sun. The fact that they are cold-blooded only makes them more dependent on the sun.

Seeing any dead reptile, but especially a lizard shows that there is physical and spiritual darkness enshrouding a place.

Consider the place where you saw the lizard. Was it anywhere close to your home or was it somewhere unfamiliar?

If you saw a lizard in your house or garden, you should beware of negative energy. Do not starve yourself of positive energy by worrying about the past and the future. Be like the lizard, careless in the moment soaking up every ray of sunshine and savoring every moment.

Moreover, make sure to open yourself to others. Humans are sociable creatures. We need to stay open to let others’ warmth reach and heal us.

The fact that you saw a dead animal with such a strong survival instinct is your sign to let things go. Stop wasting energy repairing your wounded parts. Embrace whatever pain you carry within you and move on.

It is time to start growing but in a different direction and as a different person. You should make changes to the core to live your best life.

This is also your signal to recognize your true nature. Changing your personality to appease others leads you nowhere.

Life is much too short for you to live it following other people’s rules. Find your true colors and let others see them.

“I am not a demon. I am a lizard, a shark, a heat-seeking panther. I want to be Bob Denver on acid playing the accordion.”

What does it mean when you see a lizard?

It is not that uncommon to see a lizard. Due to their adaptability, they inhabit almost every corner of the world.

This is the reason why there are many beliefs and stories about lizards. Let us read some of the most famous perceptions of lizards in western and eastern cultures.

Many Native American tribes consider lizards to be sources of masculine energy. This translates positively to the person encountering them.

Native Americans also associate lizards with positive notions such as healing and endurance, mainly because of their bodily secretions.

Moreover, lizards are thought to bring wealth, and good fortune to the person they decide to approach.

“Precisely the least, the softest, lightest, a lizard’s rustling, a breath, a flash, a moment – a little makes the way of the best happiness.”

Snakes and dragons hold special places in Chinese culture. The lizard can easily be considered their love child. As such, the lizard is considered to carry some of the snakes’ and dragons’ characteristics.

In Eastern cultures, snakes are considered to be sinister creatures, symbolizing death whereas dragons are wise magical creatures that bring good fortune.

This duality in the lizard’s symbolism is powerful because it only proves that good and evil, life and death are intertwined. Lizards are thought to bring the best or worst out of people.

Having considered the symbolism behind lizards and knowing that death in the spiritual world is nothing but a new beginning you should have the courage to embrace the change coming your way.

Your spiritual growth is inevitable.

We all know the saying that beauty is in the eye of the beholder. The same goes for fear. We only fear things we project our scary thoughts into.

You should start seeing the lizards as the mysterious and beautiful creatures they are because lizards can teach us important lessons about mortality and survival.

1 thought on “Dead Lizard Symbolism – Spiritual Meaning When Finding One”