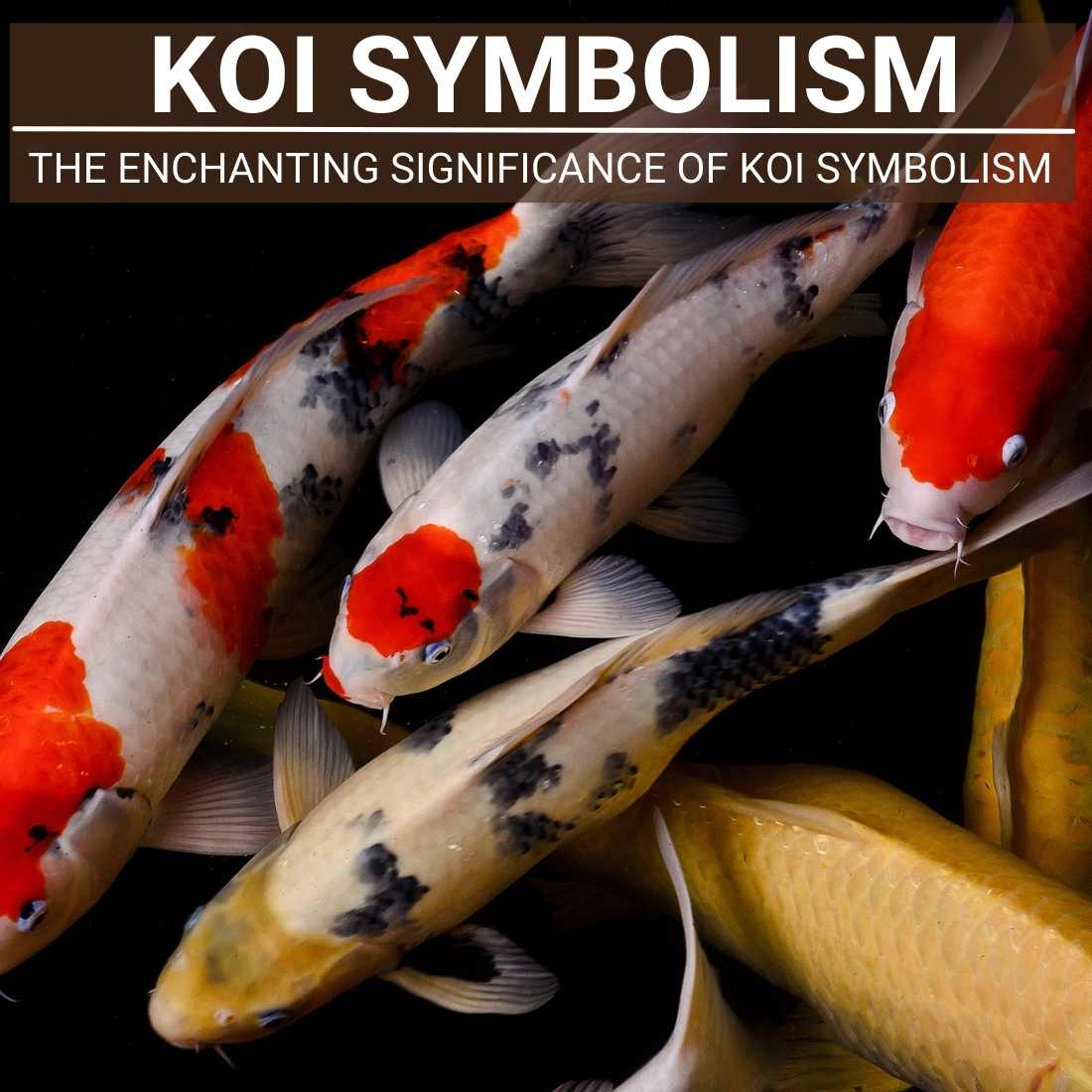 Whether you are a true-blue fan of marine animals or are simply charmed by the way they glide in aquatic museums, exhibits, and man-made ponds, the koi is perhaps one of the most popular domestic fish around. Respected and well-loved, these fabled creatures of brilliant colors date back 20 million years and the koi symbolism has long been known to bear messages of tenderness, friendship, and love. Highly spirited yet absolutely graceful, their famed connection with abundance and good fortune has earned the koi fish symbolism a prominent reputation. Typically peaceful, easygoing, and is only one of the few fish who are known to come up to the surface for a pat on the head, let’s dip into the spiritual significance of this mystical carp.

“I catch a flash of red-gold beneath the surface of the water, and realize that there are koi in the pond, massive, serene, and I wonder: are they dreams of fish, or fish who dream?”

The koi fish is a popular symbol in both Japanese and Chinese culture. It is often used to represent strength, determination, and perseverance. The koi has also been associated with courage, good luck, and fertility. In Japan, the koi is regarded as a national treasure. There are many legends and stories about these beautiful fish. They are considered to be spiritual creatures that can bring good luck and prosperity to those who possess them.

What do koi fish symbolize?

Frequently seen in outdoor ponds and water gardens, the koi fish is known to play a powerful role in both the Chinese and Japanese cultures. Recognized for their amazing memory, intelligence, and loyalty to their owners, this inspiring water creature is a symbol of bravery, strength, dedication, and perseverance.  With over 120 types of koi the world over, they have been regarded by many business owners as a representation of growth and prosperity which is why it is common for us to spot them swimming in various homes and workspaces. The koi symbolism is often regarded as a “living jewel,” they are celebrated for their attractive scales and color patterns, making them a famous symbol of beauty, admiration, and wealth.

While a koi is typically gentle, poor conditions and an unfriendly pond mate trigger its aggressive behavior. Signifying fearlessness and courage, the ability of this fish to fend off danger from predatory wildlife teaches us to face our challenges head-on and with a brave spirit. Remarkably adaptable and capable of swimming against rushing streams, this tenacious species reminds us of the importance of diligence, grit, and perseverance for us to succeed. Featuring elegant-looking bodies that flash radiant colors, their ability to blend in and stand proud in many of the world’s most famed gardens, as well as the affinity of state officials and powerful leaders towards them, has made them a popular symbol of financial success and abundance.

A cherished pet for many, the balanced and positive energy that the koi icon carries is perceived to bring prosperity and good fortune to its owner. A treasured symbol of peace, renewal, and fresh opportunities, their ability to go against the current regardless of its strength has made them figures of non-conformity, fortitude, and individuality. As it has been observed that no two koi are the same, these strong-willed and fearless fish remind us of the importance of self-expression and to be proud of our unique traits as individuals.

When you receive a koi as your spirit animal, it’s time to rejoice! This powerful fish will bring new opportunities that are perfect for reaching all of those goals and ideals. Watch out–you might not even be an able to stop at just one bite of these tasty treats coming towards you from every direction

A Koi is known in Japanese culture because they’re said to have been bred by royalty centuries ago; which means their scales must possess some serious sclerosis power (which we know how much our clients love). But don’t let this cute little guy’s stature fool ya: while his humbleness may make him seem less intimidating than most large predator fish, he’s fierce when it comes to swimming upstream and reaching his goals.

The koi symbolism message from our koi spirit animal is one of achievement. We should not let the waves of negativity, anger, and self-doubt beat us down! When you release those weights they will allow your swim unhindered as long as there is breath left in order for learning how to use everything that has been learned throughout these struggles leads towards personal fulfillment

We must always be humble enough so we don’t forget what it feels like when things get tough because without adversity life would just flow by with no meaning or value-added onto who I am and what I do.

The Koi as an animal totem

If the koi is your animal totem, it may indicate that you possess the qualities that these fish represent. Strength, courage, determination, etc. The koi can also help you to access your intuition and inner wisdom. If you are working on developing your spiritual abilities, the koi may be a powerful totem for you.

It’s clear that people with the koi totem have a gift for creating wealth. They are always transforming one thing or another into gold, and know-how to stay calm in adversity when others would give up easily on themselves! Furthermore, they also practice meditation so as not only to Facilitate Transformation but guide it wisely- knowing at times it is time to retreat from your busy life back onto a ground level where you can reflect before taking action again…

An amazingly attractive fish that holds a special place in the hearts of the Japanese, koi fish or Magoi were originally brought to Japan by the Chinese around 200 BC. History tells us that a mutated carp was given to Confucius’ son as a gift by King Shoko of Ro. As it quickly became a subject of countless Chinese artworks, these carps were bred as a food source because of their strong and flexible nature. Known as a carp whose looks were altered by evolution, the Japanese were the first to breed the fish and introduced vibrant colors to the species. A close relative of the goldfish, the koi’s popularity went on a steep climb in the 19th century when farmers working the rice fields discovered, captured, and raised the ones that featured several vibrant color patterns. They were exhibited at an exposition in Tokyo in 1914, paving the way for their availability in most pet stores today.

A descendant of the more common black carp, the koi fish developed patches of colors which made them a popular figure in numerous outdoor ponds. Often seen with stripes and spots of red, blue, and white, they are considered sacred by many and have long been esteemed as a symbol of strength, persistence, favorable fortune, and wisdom.

Koi in myths, legends, and folklore

Brimming with incredible symbolism and positivity, this magical fish’s origins are undoubtedly deep and storied. A legend long ago tells us of an extremely large school of golden koi swimming upstream the famed Yellow River in China. Furiously wading against the current, the school ultimately gained strength and sparkled as they made their way through the river. While a number of them finally gave up, turned back, and let the flow of the river carry them away, there were some who refused to back down and stayed with the goal of reaching the waterfall’s top. Catching the attention of the spirits of the river, they were mocked and were challenged even more when these malicious spirits heightened the waterfall. Legend has it that after 100 years of trying, one koi finally made it to the top and was recognized by the gods for its determination and perseverance. As a reward, he was turned into a golden dragon which is the image of immense power and strength.

In Japanese culture, the koi fish is associated with the samurai warriors as they too are an image of courage, loyalty, and vigor. The koi’s struggle to push upward symbolizes our journey through the river of life as it enlightens us to persistently swim on regardless of how insurmountable the obstacles may seem to be.

Known for their richly colored scales and patterns, many breeders strive for the ones that display their most intriguing features. Boasting shades that range from blue, red, black, and yellow, let’s dive into what each color means.

Apart from symbolizing motherhood, femininity, and care, a solid red koi indicates strength. Featuring a white body that is splattered with red marks and spots, it is telling you that you will be gifted with a successful career. However, if your fish is wearing the red color in its mouth like lipstick, then it is a sign of love and an enduring relationship.

While this is a variant that is rarely seen, a blue koi signifies calmness, tranquility, and peace. Its uncommonness could be a reminder that the realization of these aspects often requires a little more effort and sacrifice.

Perhaps a favorite of many, the Yambuki or the gold koi is an image of prosperity, wealth, and great riches. Swimming into our presence in times of financial struggles, it is an encouragement saying that great wealth is coming our way and that we should take steps to ensure that it never leads us astray.

Swirling with a long and deep history in ancient Asian culture, the koi symbolism offers a bottomless meaning to those who welcome its presence into their life. Friendly, highly sociable, and long for the occasional gentle head pat, these magnificent creatures are a firm reminder that though you may seem small and insignificant, great things will sprout if you remain persistent and work hard to climb your waterfall.