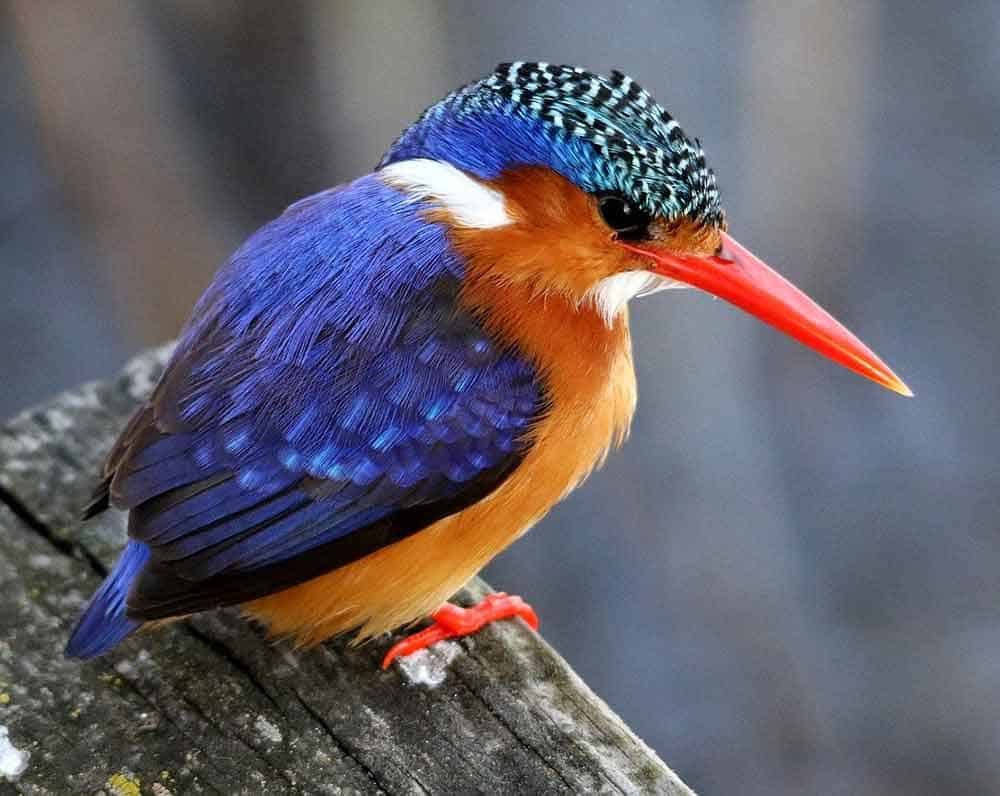 The kingfisher is a beautiful bird that has many symbolic meanings. It’s known for its bright blue colors and long, thin beak. This is a small animal that lives near water and can dive down to the bottom of the pool in search of food. The legend says that this bird brings good luck because it can find hidden treasure on the riverbed. Another interpretation suggests that this creature symbolizes intuition and inspiration, which will help you get unstuck from any creative block or mental rut you might have been stuck in lately!

The river is such a tranquil place, a place to sit and think of romance and the beauty of nature, to enjoy the elegance of swans and the chance of a glimpse of a kingfisher.

If you have been on a forest trek near a river, chances are you have seen a beautiful kingfisher bird with its vibrant blue and orange plumage dive into the water and come out with a tiny wriggling fish in its beak. Darting across the river and standing out from the forest’s greenery, these small to medium-sized birds (they measure from 10 cm (Dwarf Kingfisher) to 45 cm (Giant Kingfisher); the heaviest species is set to weigh more than 450 g) with large heads and strong, massive bills are considered to bring luck to those who are fortunate enough to be graced by their dazzling presence (in fact considered as one of the most beautiful birds of the world). Widely known for their awesome fish-hunting skills, as well as being an image of love, prosperity, and peace, we take a look at the fascinating kingfisher symbolism.

The Common Kingfisher symbolizes luck because they can find hidden treasure on riverbeds. They also represent wisdom through their ability to dive deep into the water with conviction and determination in search of food–even though there’s no guarantee that they’ll come back up again with any prize at all!

Long regarded as a symbol of affluence and harmony, the kingfisher is surrounded by many legends and superstitions. Brandishing colorful feathers of orange, blue, and shades of green, legend say that they used to sport plumes of dull gray. That is until Noah released it from the ark and it flew towards the sun and the blue sky where it got burnt, before adopting its bright new colors. Such a transformation made the kingfisher a representation of abundance and love that are about to unfold.

Mostly found in Europe, Africa, and Asia, the unique color of the kingfisher is attributed to the gods of ancient Greece, wherein the manifestation of selfless and unconditional love brings new life not just to ourselves, but to those closest to us as well. Often associated with royalty, people would time and again draw a connection between these amazing birds and Jupiter which symbolizes wealth and abundance. In instances when we attract negativity, kingfishers are trusted to alter our fortune for the better, teaching us how to be responsible and productive yet still find the means to enjoy life.

Using their tiny but extremely sharp dark brown eyes, they are capable of zooming into an object or prey numerous times and are also able to precisely determine the water’s depth just by looking. This indicates that kingfishers can provide us with the gift of perception, allowing those who rely on them as their spirit guide to see things positively and to understand the needs that every situation brings.

The kingfisher’s ability to dive into the water and through thin ice at a speed of 40 km/h to catch a meal tells us that it is okay to submerge ourselves into new things. These spellbinding birds provide us the courage to face new challenges and opportunities, telling us to sidestep the fear of the unknown and to relish in the excitement of learning something new. Since we are unsure about leaving our comfort zones most of the time, the kingfisher will arrive at the most opportune time, bearing greater consciousness and vast knowledge that can help us keep an open mind on the new circumstances that come to us.

Known to be notoriously shy and aloof towards humans, the kingfisher plays a significant role in numerous spiritual cultures and traditions. Not only do these tacky, beautifully-hued birds (check this photo!) motivate us to run the extra mile and go for the depths, but they also send warm feelings of encouragement to help us overcome our fear of the unknown and to faithfully leap into new experiences. They remind us to take close notice of our visions, particularly recurring dreams, as they may be communicating significant hidden messages.

Recognized as one of the easiest to spot even in the wild, the sun can amazingly make its orange plumage seem like fire while making its blue feathers more defined. This marvelous fusion symbolizes contrasting ideas such as serenity and calmness, as well as passion and excitement, interpreted by some as a representation of our humanity and the concept of immortality (check also the Phoenix’ immortality).

While such notion may lead us to a range of perceptions, it all points back to one of its most obvious embodiment which is Jesus Christ Himself. With such contradictions, the kingfisher was revered as a symbol of Christ as the bird is known to fuse the opposites, particularly the images we paint that pertain to life and death.

In the tales of some of the most legendary warriors, one of them a protector of the cup that kept Jesus’ dripping blood from the cross safe suffers from a wound that never heals. Many Christians believe that it is only through Christ’s healing hands that we are relieved of our hardships. And that by allowing Jesus to come into our lives we encounter love, patience, and humility, much like the kingfisher.

The Kingfisher as Spirit Animal and Totem Animal

The Kingfisher Totem Animal is a messenger of intuition and inspiration. You may need to unblock your creativity by letting yourself imagine new possibilities. The kingfisher totem helps you see the beauty in life, even when things are not going so well for you or others around you. This animal will help guide us towards change if we let it!

While various cultures have varying interpretations of the kingfisher as a spirit animal, many believe that having this awesome bird’s presence in your life is a constant reminder to remain calm and maintain balance, particularly when difficulties in regaining control of your life arise. It serves as our reminder to pay close attention to the people and events that are taking place around us. For those going through some financial challenges, the kingfisher as a spirit animal is a breath of hope as it brings a message about your status’ positive and immediate change.

This bird’s ability to rapidly flap its wings allows it to peacefully hover above water in search of its prey. It is an indication for those of us going through stormy and turbulent times to remain still and know that love and serenity are about to come. Kingfishers seem to have a knack for knowing when we need them as they startlingly arrive at the best possible times. It is on the days that we wish to attract good fortune, learn new things, and seek spiritual balance when these mystical birds come diving deep into our lives.

The kingfisher provides you not only with spiritual equilibrium but with life balance as well. When you find yourself deeply absorbed in tasks that leave you with little to no time for the significant people in your life, these charming birds come to you as a reminder of how important it is to remain visible not just physically, but wholeheartedly as well as it can have adverse effects on your relationships. Acknowledged as a symbol of faithfulness (just like the swan’s spiritual totem) and a happy marriage, this bird of different feather colors reminds us of the importance of fidelity, trustworthiness, and devotion.

In some cultures, the kingfisher is a symbol of protection and hope. In other traditions, this animal represents luck while in others it’s associated with beauty and love. Here are some meanings from different countries:

Alcyone, Ceyx and the Kingfisher

The kingfisher is perceived, just like many birds, as a messenger of the Gods. Often referred to as a Halcyon, this small bashful bird of blue and orange color can be intimately associated with the divine figures in Greek Mythology. As the story goes, King Aeolus of Thessalonia, a.k.a. the god of the winds, had a daughter named Alcyone. She was happily married to Lucifer’s son Ceyx and they were seen as a couple comparable to Zeus and his wife Hera as there were huge similarities between their power and skills.

Known to be an impolite and jealous god, Zeus struck Ceyx with one of his patented thunderbolts and turned him into a vulture while he was on a voyage out in the sea. Ceyx’s failure to return made Alcyone’s heart grow fonder, in which she spent days looking for her husband day and night in the vastness of the sea. Many of the Olympian gods who have witnessed Alcyone’s grief felt pity for the Thessalian princess and decided to turn her into a seabird with the name Halcyon.

However, her days of despair continued as she was compelled to lay her eggs during the frigid winter months when the large waves of the sea could easily swarm and claim her babies way before they learn how to fly. Upon seeing this, Zeus was moved by her heart-wrenching cries, pressing him to bring into existence a period of exceptional weather in the middle of winter when both the winds and the sea are calm, giving Alcyone enough time to brood her eggs and teach her hatchlings how to fly before the large waves come.

While science continues to explain this weather phenomenon as the balancing of pressure between the north and the south end of Europe, many of us still refer to this period of calm as Halcyon days. Named after the kingfisher that breeds her eggs on sea rocks, this bird species do not leave in the fall, enjoying beautiful sunny days and pleasant weather in the heart of winter.

Standing as a symbol of serenity and peace, the Halcyon reminds us that no matter how hopeless and distressing our situation, it is always better to remain optimistic and trust that all things will eventually fall into their proper place. The Halcyon’s nature of carrying its mate on its shoulders when they are no longer able to fly and caring for them until their death has made these amazing birds a representation of marital faith, bringing love and warmth on those cold winter nights, as well as making the days full of happiness and light.

[Video] Kingfisher: Death from Above

The Kingfisher is a fish’s worst nightmare…

Despite its beauty, great hunting prowess, and flying speed and style that packs a punch, the kingfisher remains to be withdrawn and secretive. Rich in myth and symbolism, these fascinating birds of dazzling brilliance bring calm, fondness, and devotion to those they choose to keep under their wings and guidance.

4 thoughts on “Kingfisher Symbolism and Meaning”