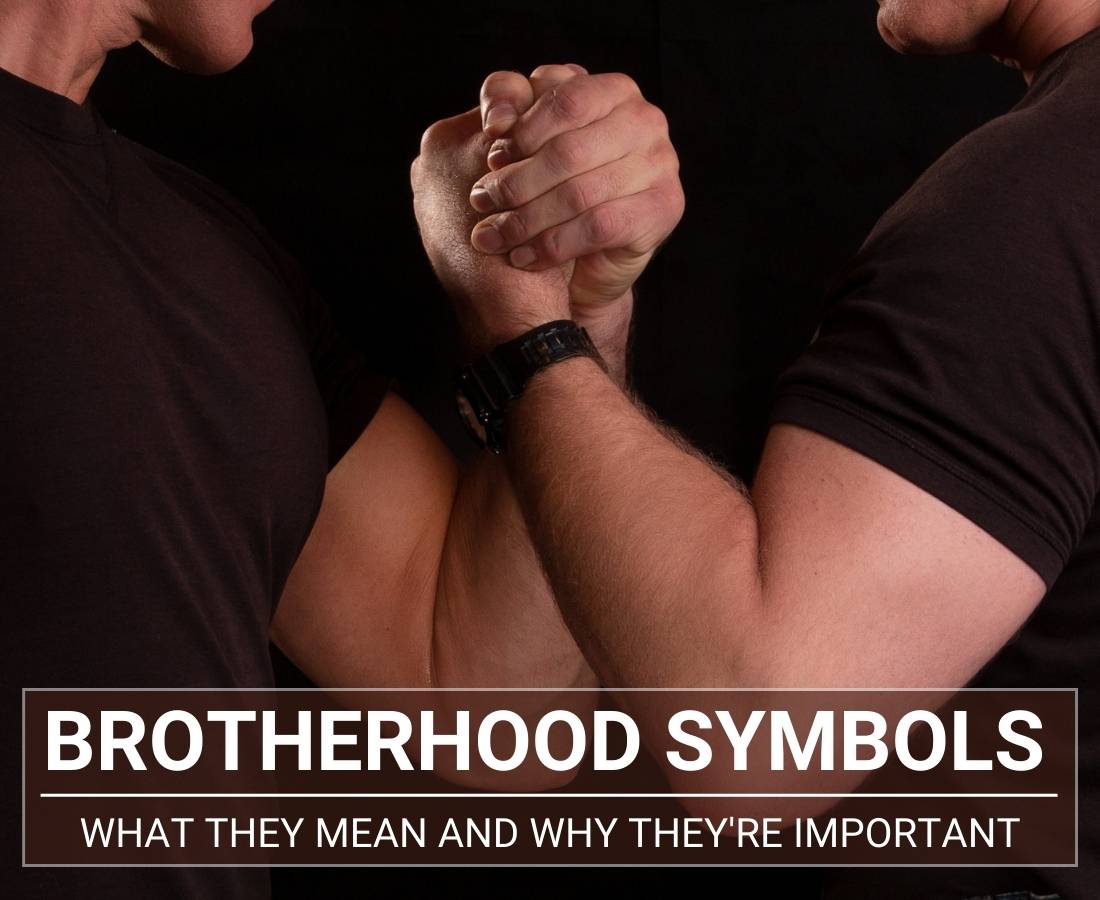 From the feeling of having a close-knit relationship to the countless social activities and networking opportunities, there is no question about a brotherhood’s amazing benefits. Apart from the fellowship that comes from being part of a tight group, the sense of belongingness we get from working and living closely with our most trusted friends helps us form lasting bonds that often last a lifetime.

Whether your brothers are there to remind you that you are never alone or to give you the push you need to reach your goals, we rounded up the best brotherhood symbolism to show you the perks of having a strong support system.

Considered a less formal and more hygienic cousin of the handshake, fist bumps are a gesture of affirmation that is viewed by many as a contemporary symbol of brotherhood and friendship. Believed to have risen to popularity and use in the 1970s, bumping knuckles is prevalently seen and practiced in sporting events and alcoholic drink commercials.

Widely recognized as a gesture of approval or respect, the fist bump shows us how brotherhood provides us with a strong backup from peers whom we fully trust.

From being a more intimate form of greeting to providing encouragement and comfort, hugs are an acknowledged indication of love, familiarity, sympathy, and brotherhood. A gesture that is often done as a way to show emotional support, it is, at times, considered the best way to show kindness and compassion when words seem insufficient.

Regarded as an expression of friendship in times when physical distancing led many to forget about the importance of physical contact, nothing signifies solidarity and brotherhood better than a hug.

While many of us see these groups as facilitators of the craziest parties our young lives have ever known, there is more to fraternities than just wild soirees and camaraderie. As each member upon recruitment vows loyalty to the group and all their peers, the fraternity has long been held as a solid symbol of affinity, devotion, and brotherhood.

Apart from providing us access to a wide array of booze, frat brothers are admired for helping each other succeed in their studies. Known to open their members to a vast network of people, fraternities can help make job hunting a breeze after graduation.

Officially the definition of a fraternity is: an organized society of men connected together in a setting of camaraderie and brotherhood, a fraternity or fraternal organization is devoted to the intellectual, physical, and social growth of its members.

Believed to have had its roots in the Spartans, soldiers would gather to celebrate the coming wedding of one of their own. Known for their devotion to the military, a significant part of the festivity is when the groom would pledge his loyalty to his fellow soldiers, which made the event a powerful brotherhood symbol.

Often referred to as “stag night ,” bachelor’s parties (they are also a symbol of brotherhood) are commonly held the night before a wedding to celebrate the groom’s last night of freedom. While modern-day celebrations now include activities such as skydiving, kayaking, and rock climbing, a bachelor’s party would never be complete without beers, your closest peers, and a few bad decisions.

With a long history that stretches back to the war between Athens and Sparta, jumping into a boat to join a group of rowers has been viewed by many as a fascinating brotherhood symbolism. For even the most reluctant exerciser, rowing is not just a fun way to work your muscles and stay in shape. It also teaches us about the importance of togetherness and friendship.

Apart from helping develop incredible muscular strength and endurance from head to toe, rowing teams encourage you to embrace the importance of brotherhood and teamwork. As cooperation and coordination are vital to achieving success, every single rower needs to work together in unison.

While it often takes months of practice for a team to row together efficiently, nothing beats the feeling of gliding across the water together with your brothers.

While it may be a lot easier to join a club where you don’t need the skills to dodge bullets and run away from bombs, the relationships and brotherhood you discover when you join the army are second to none. Considered a life-changing commitment, being part of the military comes with a deep sense of kinship that one can never find as a civilian.

Since many of us believe that mutual self-sacrifice and hard work in some of the most stressful conditions help form unbreakable bonds, joining the military provides a lifelong sense of community among its members. With both your mental and physical capacity constantly tested, it often leads to a sense of brotherhood that often lasts a lifetime.

You might have heard of the tv series band of brothers; its about comradery and brotherhood in the army. See the trailer below.

The Freemasons use many symbols to represent their brotherhood. These include the All-Seeing Eye (Eye of Providence), the compass and square, the masonic trowel, and the masonic apron. This brotherhood stands for the ideals of liberty, equality, and fraternity.

The ancient order of druids (AOD)

The Ancient Order of Druids or AOD for short is the senior neo-druid order in existence today. This organization was formed back in 1781 when it first met up with other like-minded individuals following their motto of justice, philanthropy, and brotherly love.

Their symbol is the Druid’s Cross, which is a Celtic cross with a circle around it. This symbolizes the four elements (air, water, earth, and fire), as well as the sun, moon, and stars.

The Rose Cross (also called Rosy Cross) is a symbol largely associated with the legendary Christian Rosenkreuz. The Rosicrucian manifestos tell an allegorical story of the Rosicrucian Brotherhood’s symbol, the red cross on a white background with a rose in the middle.

The story goes that early Christians adopted the red cross as their emblem and that later, a Rosicrucian sage called Christian Rosenkreuz superimposed a rose onto the cross to create the symbol known today.

Using their innate intelligence, good communication, and strong family ties, wolves are widely acknowledged as the most accomplished hunters in the animal kingdom. Popular for their nighttime howls, these hounds convey messages from long distances to defend their territory, find missing members, and assemble the pack for a hunt. This led many to view them as a symbol of loyalty, brotherhood, and devotion to the family.

Admired in several traditions for their pack-first mentality, their goal of ensuring that the pack thrives has made them strong symbols of relationships, brotherhood, and solidarity. Depending on each other for survival and to keep themselves safe from predators, the wolf reminds us about the importance of developing strong, long-lasting relationships.

The eight-pointed star, the pentagram, and the double-headed eagle are some of the symbols used by different brotherhoods throughout history. Each symbol has its own meaning and purpose, which is often based on the beliefs of the particular group that uses it.

Also check out this video about brotherhood symbols

Are there any negative connotations associated with brotherhood symbols?

How should fraternity members use brotherhood symbols responsibly and respectfully?

Fraternity members should use brotherhood symbols responsibly and respectfully. They should be aware of the meanings of the symbols and how they might be interpreted by others. They should also avoid using symbols to harm or intimidate others.

What is the Aryan brotherhood?

Shamrocks, swastikas, and other symbols are used by the Aryan Brotherhood to identify itself in a variety of phrases, symbols, and imagery. Acceptance into the Aryan Brotherhood is helped by a prospect’s readiness to kill another prisoner; new members may swear a blood oath or make a promise in order to join.

Why is global brotherhood necessary?