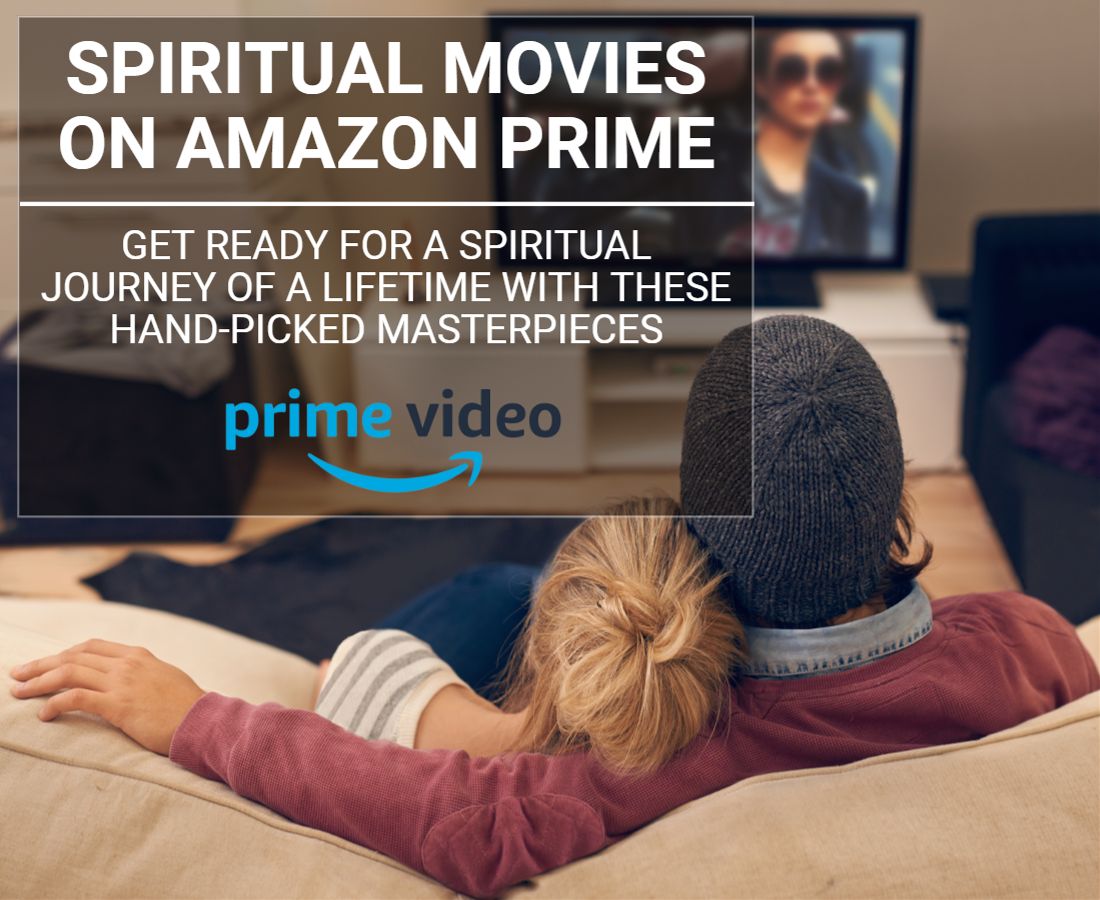 Thought-provoking spiritual movies can be challenging to find. Luckily, Amazon Prime has hundreds of spiritual-related movies for you to enjoy.

Whether you’re looking for a movie filled with religious themes or want to watch a documentary that examines spiritual concepts such as consciousness and energy, Amazon has the perfect movie for you. In this article, you’ll find six movies that every spiritual person should watch.

Relax, grab some popcorn, and enjoy!

I Can Only Imagine 2018 Movie is a powerful new film about faith and forgiveness based on the true story behind the beloved MercyMe song of the same name. With an incredible cast and a heartwarming story, this spiritual movie will leave you moved by its poignant message.

Directed by Jon and Andrew Erwin, this inspirational drama follows Bart Millard as he reflects on his troubled childhood with an abusive father while writing one of the most successful Christian songs ever recorded.

With an outstanding ensemble including J. Michael Finley (Bart Millard), Madeline Carroll (Shannon Millard), Dennis Quaid (Arthur Millard), and Trace Adkins (Barry Boggs), I Can Only Imagine brings these characters to life in a way that will touch your soul.

The Cokeville Miracle is a powerful spiritual movie based on the true story of a small Wyoming town in 1986. On that fateful day, David and Doris Young entered the school with a bomb and guns, taking the entire student body and faculty hostage.

The situation seemed hopeless until an incredible miracle unfolded before everyone’s eyes.

The movie follows the families of the victims as they struggle to make sense of what happened that day.

Viewers will be struck by how faith helped these people find strength in their darkest hour, even when faced with such unimaginable circumstances. Through interviews with survivors and family members, The Cokeville Miracle showcases stories of courage, hope, and forgiveness in spite of all odds.

This powerful movie is sure to move viewers to reflect on the power of faith and how it can bring us together during our most desperate times.

Inner Worlds, Outer Worlds, is a 2012 Canadian documentary film examining the spiritual and metaphysical aspects of life. It explores humanity’s relationship with the universe, delving into ancient knowledge, modern science, and consciousness.

Directed by Daniel Schmidt and produced by his production company All Dimensions Media Ltd., Inner Worlds, Outer Worlds is a thought-provoking exploration of the nature of reality. The film presents an enlightening look at how our inner worlds are connected to our outer worlds.

The film takes viewers on a journey through the Akashic Records (the energetic patterns that form all matter in existence) and how these records affect our lives today. This movie also takes us deep into sacred knowledge from various indigenous cultures around the world, including Hinduism and Buddhism, as well as exploring quantum physics theories about energy fields that affect us all on a daily basis.

Everything and Nothing is a 2016 spiritual movie that explores the concept of life, death, and everything in between. Directed by Xavier Dolan, it follows the journey of a young man who is struggling to accept his father’s tragic passing.

As he struggles with his grief, he embarks on a quest to try and understand what it all means– ultimately finding comfort in discovering that life and death are mysterious forces that can never be fully understood. The film offers an intimate look at how one person navigates loss while trying to make sense of the world around them.

At its core, Everything and Nothing is a story about coming to terms with mortality; however, its unique blend of philosophical musings and visual metaphors helps elevate this exploration beyond mere sentimentality.

The Kybalion is a spiritual film that has been highly anticipated by spiritual seekers everywhere. Featuring a star-studded cast, this movie promises to bring the ancient wisdom of hermetic principles to a modern audience.

The Kybalion is based on the teachings of Hermes Trismegistus, and this movie will surely capture the essence of these timeless lessons. The well-known principle ‘As Above So Below’ serves as the foundation for this exciting visual masterpiece.

Set in present-day and historical times, viewers will follow this powerful journey toward self-discovery and enlightenment. Through these trials and tribulations, you’ll discover the true power of universal laws such as cause and effect or polarity -also known as Hermetic Principles.

The Expanded Edition takes an even deeper dive into this exciting field by featuring interviews with leading-edge scientists who discuss their research into how energy can be used to transform health and well-being. The film also examines various techniques for using energy to create balance within ourselves and in our lives.

Additionally, it looks at how we can expand our understanding of what healing is through practices such as meditation and yoga. Overall, The Healing Field is a thought-provoking look at the incredible potential for healing that exists within us all.

The documentary Heal 2017 examines the power of spiritual healing and its effects on both physical and mental health. This compelling film illustrates how utilizing ancient spiritual practices can help to improve our lives, even in today’s modern world.

Through interviews with doctors, shamans, scientists, and spiritual leaders from around the world, viewers gain insight into the science behind alternative healing techniques such as meditation, acupuncture, and Reiki. Heal 2017 takes a holistic approach to topics such as stress reduction and internal transformation by exploring how we can use spirituality to achieve better health.

The film follows individuals suffering from chronic illnesses who have found relief through alternative treatments and discussions on how these practices can be applied more broadly in everyday life.

Interested in watching Heal? Check out the trailer for the documentary here.

A good Christian movie is one that accurately portrays the teachings and values of the Christian faith, and presents them in a way that is relatable and meaningful to viewers. It should also have strong acting, engaging storytelling, and high production values.

Additionally, a good Christian movie should encourage viewers to think deeply about their faith, their Christian family and to consider the teachings of Jesus in their own lives.

The passion of the christ

“The Passion of the Christ” is an incredibly moving film experience. Directed by Mel Gibson and starring a stellar cast, this powerful movie follows Jesus’s journey in his last days on Earth – from arrest to crucifixion. The depiction of suffering through intense visuals has earned critical acclaim and recognition for its artistry; however, it may be too much for those with sensitive hearts.

Beyond religion or spiritual beliefs, “The Passion of the Christ” offers insight into faith and redemption that will stick with anyone who watches it. It’s definitely worth watching regardless and it remains the top-grossing faith-based film of all time.

Fans of classic literature make sure to check out the stunning animated adaptation of John Bunyan’s “The Pilgrim’s Progress”! The film tells the story of a man named Christian who embarks on a journey to reach the celestial city, representing heaven while facing various trials and temptations along the way.

“Where Hope Grows” is one of the best spiritual movies on Amazon prime. It’s a heartwarming film about a former baseball player named Calvin who meets Produce, a young man with Down syndrome, and rediscovers his faith and hope through their friendship. This inspiring movie is available on Amazon Prime and is sure to uplift and inspire viewers with its message of hope and redemption.

“Selfie Dad” is a 2020 film that tells the heartwarming story of Jack, a widowed father who is struggling with temptation and connecting with his teenage daughter after the loss of his wife.

Jack is a lovable goofball who is struggling to navigate the complexities of modern parenting, but with the help of a wise and witty neighbor, he begins to learn the importance of listening, communicating, and being present in his daughter’s life.

“Selfie Dad” is a heartwarming and uplifting film that will inspire and delight viewers of all ages. It is a great choice for anyone looking for a feel-good movie that will remind them of the importance of family and the power of love. So why wait? Get ready for a spiritual journey of a lifetime with “Selfie Dad” on Amazon Prime.