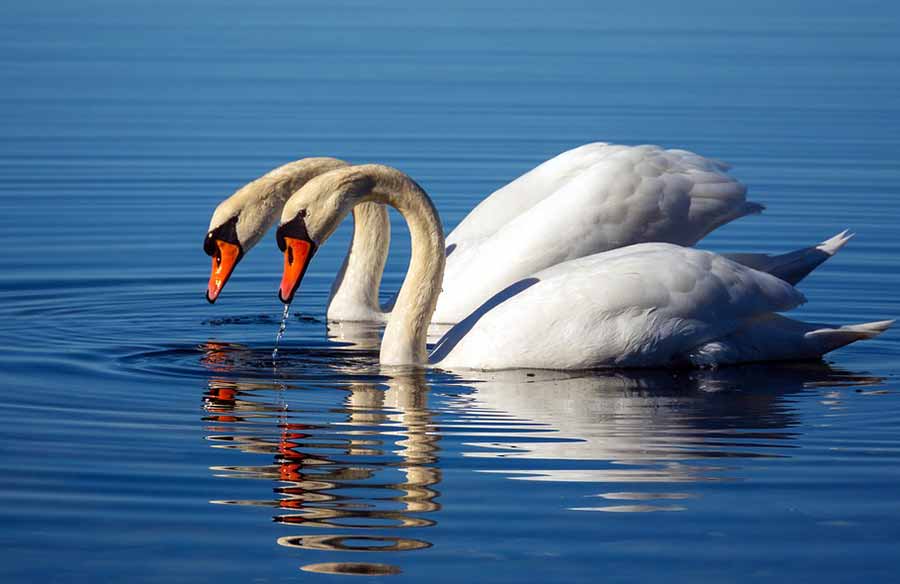 Swans are one of the largest waterfowl species of the Family Anatidae and subfamily Anserinae. Most swans are classified in the genus called Cygnus. Swans are elegantly long-necked, big-footed, and heavy-bodied birds that glide royally when swimming. Swans fly via necks outstretched and with slow wingbeats. They migrate in V-formation or diagonal formation at great heights and move very fast on water or in the air.

There are many species of swans, but six of them are most common. These six species belong to the Family Anatidae of Birds, which reside in the Genus Cygnus. Swans are also related to Geese.

What’s the Food of Swans?

Many people learn about the Swans’ cultural significance through their ugly stories or their use in various military emblems. Swans are also known for some of their more appealing habits.

For example, they will feed their entire life almost exclusively on water. They are aggressive and will thoroughly protect their territory. Swans are also known as fascinating creatures who will become life partners (although they will be separated from their partners).

Let’s talk about their food. What do swans eat? And from where do they get most of their nutrition?

As mentioned above, Swans usually feed on water. They are primarily vegetarians and will thus enjoy all kinds of aquatic plants, which includes the following:

Except for these aquatic plants, they also eat small animals or fish in their vicinity. Well! We all want a change of taste, and the same goes for Swans.

Along with plants, they also eat the following animals:

Swans are fascinating and majestic birds, so people see them as a positive aspect of their lives. Birds in private collections, urban areas, or sanctuaries are fed with those various food items they wouldn’t usually see in the wild. Generally, people give bread and different type of grains to exotic or wild birds such as ducks, geese, and swans.

Usually, Swans eat their food underwater. While eating, they only raise their head above water when they seek any danger or disturbance in the surrounding.

They eat lettuce, potatoes, and other vegetables when they are on land. These food items usually enhance supplements to their routine aquatic diet.

How Much Food Do Swans Need to Consume per Day?

Generally, swans eat whenever they feel hungry. On average, Swans’ average body weight is 21-27 pounds, and they have to eat a lot to maintain a massive body temperature of 106.2 degrees. Their feeding consumption is equal to 20-25% of their body weight per day (food worth about 4-7 pounds).

Swans are not those creatures that eat in too many large quantities, so they will graze for some time and return to their reliable food sources several times a day instead of using one large meal. Also, they do not have a large stomach, and they often eat regularly to nurture themselves.

Swans should eat more regularly than most carnivorous animals. Raw, green foliage is difficult to digest because they contain large amounts of cellulose. This means that swans have to spend as much energy as possible to digest these high cellulose foods and process them.

How Do Swans Consume Food?

Swans prefer to eat food that is present on top of the water, so they eat algae in massive amounts. This is because it consumes less energy. Like most animals, they want to save energy as much as possible by doing less physical work. Unnecessary calories can make it challenging to maintain your body temperature, such as looking for food on the land or drowning underwater.

However, if they need to, they will stretch their long necks deep into the water to find the plants of their choice. This process is often known as “upending.” They usually do upending when they are in shallow waters. When their necks come down in search of food, their hindquarters rise above the surface of the water, and they flail their legs.

Ironically, this ability allows them to reach plants that other birds cannot compete with because they cannot get down much, or in other words, they eat those plant sources which other birds do not even try to eat. Ideally, Swans will dabble on the water’s surface in shallow waters

Variation in diet depending upon gender and age

There is something different about the Swans diet. We have discussed how females eat more compared to males. Similarly, young swans are more likely to eat animal matter than older Swans. Once the Swans hits the adult stage of their life, they eat almost negligible animal material.

Swans do not change their diet depending on the season, but the adult swans prefer to eat veggies.

Swans that live close to humans, especially in the fields, come out of the water and occasionally raid the areas. These jaunts consist of swans that waste grain and corn. Once they have eaten what they have found on the land, they will eat the planted crops, and put a significant loss to farmers

They can expand their diet to include other vegetables, such as celery, carrots, spinach, and celery, in situations where their everyday nutritional needs are not met.

Swans need plenty of water to survive. They live in freshwater conditions and will consume mainly enough water to meet their daily quota. Although in severe cases, they can drink salty water. Their bodies will extract a limited amount of salt from their bloodstream and then convert it into the liquid from their bills. However, they must drink a constant supply of clean water whenever possible.

For further readings about swans check our post: The Swan Meaning