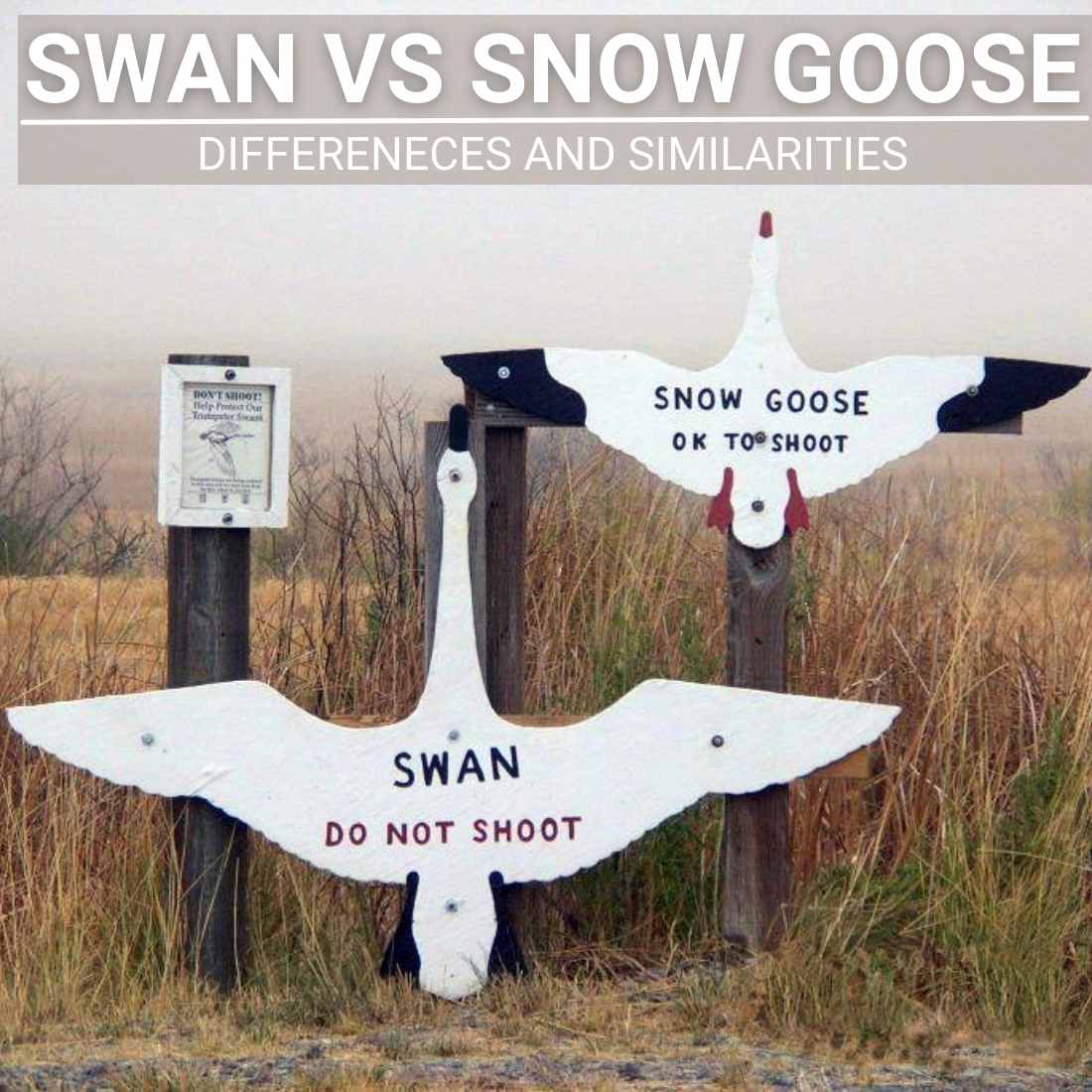 At first glance, a swan and a snow goose may appear to be quite similar birds. Swans are seabirds of the Anatidae family and are members of the genus Cygnus. Geese are also members of this family, although they are not related to swans in any way. Both have proper webbed feet, which aid them in propelling themselves forward when swimming. But keep in mind that all of the birds in the bird kingdom have significant similarities and variances from one another. As a bird watcher, you must be familiar with the differences and similarities that exist between these two species of water birds.

Take a look at the below-mentioned overview to observe how the swan and the snow geese vary from one another.

Differences between Swan vs Snow Goose

When comparing the swan to the goose, the swan has a longer neck. The swan’s neck is carved into an ‘S’ form, but the snow goose’s neck is straighter and shorter.

Swans are generally white with black spots, whereas snow geese have black wing ends while their other bodies are white. Geese also have different patterns on their feathers that can be useful in distinguishing between a swan and a goose in the field. These patterns are frequently found on the undersides of the animals or their tails.

Swans have a more slim and longer physique than snow geese, while snow geese have bigger legs than swans on average. When it comes to the look of their beaks, both swans and geese have unique variances depending on the species in which they are found.

In the case of the trumpeter swan, the top and lower mandibles of its bill are black with a reddish border between them. On the other hand, the snow goose has a pinkish to purple bill with a black grin patch in the center.

Swans enjoy floating and swimming in shallow water bodies, such as ponds, lakes, marshes, and sluggish water streams, and they are especially fond of wetlands.

When they are in the process of building their nests, they seem to prefer to near water areas. In fact, their cradles may be found on small water platforms, reed beds, and in dense vegetation along the edges of water sources, among other places.

Snow geese are more numerous, and as a result, they may thrive in a greater variety of environments. However, there must be a water supply nearby wherever they dwell. As a result, they prefer cold arctic water.

Like the vast majority of birds, Swans are herbivores, meaning that they exist mostly on plants. They obtain their food from soil and water sources, consuming food if it is supplied to them.

They utilize their long slender necks as a terrific tool to pull plants into the water and their strong beaks to dip through the muck to get to their meal.

When they are on land, their powerful beaks assist them in breaking and tearing grass and other plants for nourishment. In addition to roots and stems, they eat flowers and fruits as well as all other plant components.

The same as Swans, Snow Geese consume plant matter; but, certain species have developed a more diverse diet that includes insects and other tiny animals. A nesting snow goose is one that consumes a wide variety of foods in order to maintain a high level of egg production.

Swans often begin reproducing after they have reached the age of three years or more in the wild. There must have been some kind of pairing by then. Initially, these two birds would court each other by bobbing their little heads against each other, and then they will come face to face with quivering wings.

They begin mating between April and June and continue through the summer. And within this time frame, they choose a spot that is close to a water source, has lots of food, and will have little disruptions. The female swan will pick the nesting place in most cases, while the male swan will defend the nest. The nest is constructed of tiny sticks, branches, grasses, and any other type of vegetation that may be found nearby.

However, while the time of year when geese breed varies depending on where they live. For example, the most typical period for snow goose is during their first quarter of the year, between February and April.

In addition to being monogamous birds, snow geese only pick their clutch once during their lifetime, and the female is in charge of the decision. Also snow, For example, the geese have only one mating partner for the rest of his or her life. The female bird looks for the best-qualified partner who will safeguard her and her young ones while she is raising them.

Their nests are built on a high platform near a body of water that provides a plentiful supply of food. The sites they create are visited year after year. Snow goose nests may be close together or far apart, depending on their aggressiveness.

Similarities between Swan vs Snow Goose

First and foremost, both of these birds can coexist peacefully with humans in public parks and open fields (if raised as pets).

There are several more parallels between the swan and the snow goose, such as the fact that both birds’ colors are difficult to distinguish due to the identical predominant white hue of both species’ plumage. Females of both birds exhibit paler coloring when compared to their male counterparts. Swans and snow geese are both members of the Anatidae family and are members of the genus Cygnus. And finally, both have webbed feet, which aid them in propelling themselves forward when swimming.

Trumpeter and Tundra Swans are the only two types of swans that are endemic to North America. They are also the species that have historically faced the greatest threat to their survival. Despite their similar appearance to mute swans, Trumpeter swans distinguish themselves by having completely black bills and cheeks. Trumpeter swans may be identified by their loud honking noises. Because of American settlers’ westward expansion and encroachment on their environment during the twentieth century, they were driven to the verge of extinction. Although their populations have declined in some locations, they have returned in others, and they may be hailed as a major conservation success story in the future.

Here are some more interesting facts about Swans:

Here you can check all swan sounds

In Greenland, Iceland, the Arctic, and the northeastern point of Siberia (north of the timberline), the Snow Goose lives and breeds. They go as far south as Mexico during the winter and then return to the Arctic tundra to lay their eggs in the spring. Snow Geese are social creatures who prefer to travel in groups of at least a couple dozen other geese, and they may create flocks of several thousand birds.

There are a few other fascinating facts about Snow Geese that you should know:

Here you can check all Snow Goose sounds

Swans have large S-shape necks. Swans make the distinctive deep, trumpeting “oh-oh” sound. They have numerous body colors such as brown, white, black due to soo many distinct species, but usually, their color is white with black spots.

Snow Geese are among the noisiest of all the waterfowl. They make a nasal, one-syllable honk that serves their primary communication signal. Their body color is white with blackish wing ends. Their bill color is usually purplish pink.

Both swans and snow goose have basic white coloration, and they love vegetation and plants. Both are beautiful water birds, and they have webbed feet to aid themselves in living underwater conditions.