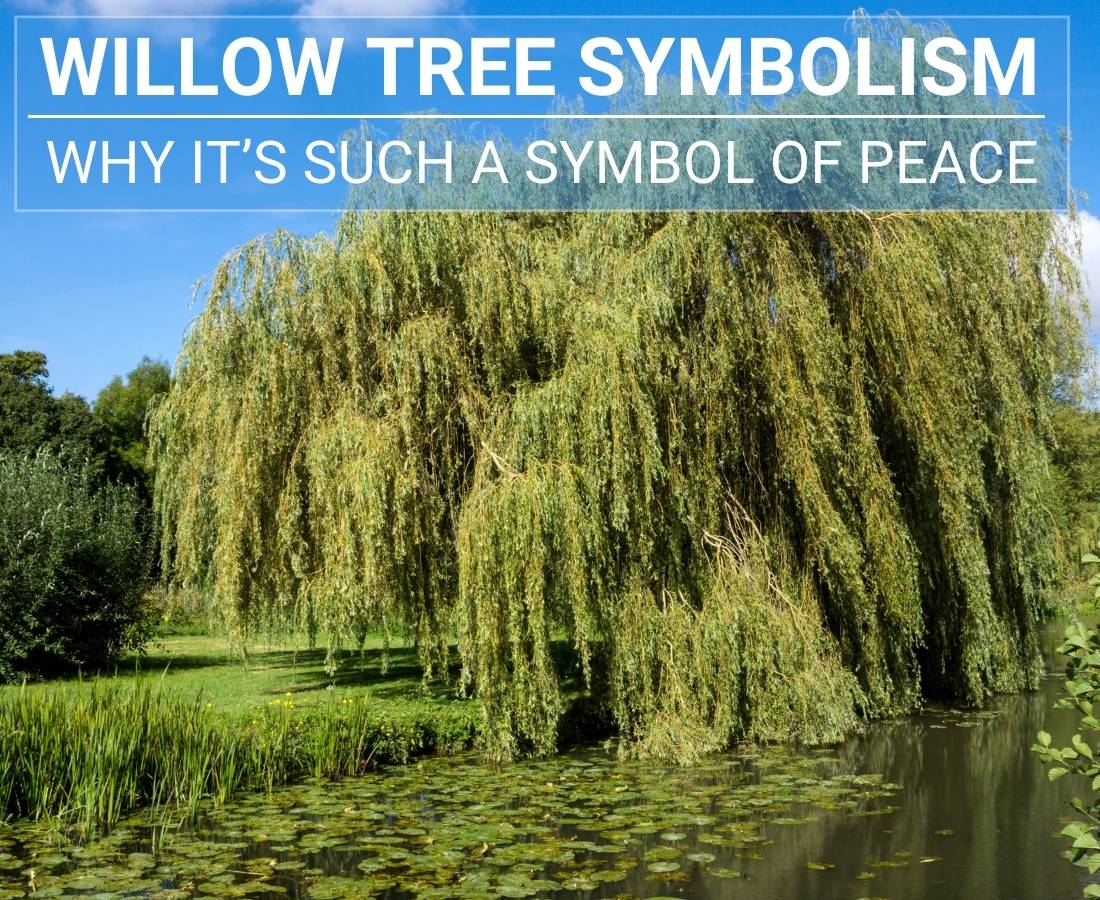 The willow tree is a symbol of change, growth, and new beginnings. It is an evergreen tree that represents hope and healing. Willow trees are often found near water, which makes them a symbol of purification and cleansing.

Have you ever sat underneath a willow tree? These trees possess magic that stays with you long after they’re gone.

In this article, you’ll find willow tree symbolism, their depiction in different cultures, and what it means if you find these beautiful trees in your dreams.

If you are looking for guidance during a difficult time in your life, consider reaching out to the willow tree for support.

“Notice that the stiffest tree is most easily cracked, while the bamboo or willow survives by bending with the wind.”

What does the willow tree symbolize?

Willows are unique trees that contain powerful symbolism, such as protection, peace, flexibility, and letting go.

In some cultures, people plant willows near homes to keep away evil spirits. Willow branches are often used in magical rituals and spells to ward off negative energy.

Willow trees also create a ‘barrier’ if they are allowed to grow down to the ground. People have sat inside these barriers during warm months to protect themselves from the sun.

The willow tree is often seen as a symbol of peace. This is likely because willow trees are known for their calming and serene qualities.

The branches of these trees are light enough to simply sway in the wind. The soft rattle of the leaves also creates a calming effect that evokes peace in just about anyone.

Willow trees are known for their flexibility, which is why they are often used as a symbol of this trait. The branches of willow trees are very pliable and can be bent or twisted without breaking.

This is due to the tree’s high moisture content; willows can even continue to grow after being cut down, as long as there is still moisture in the stump. Their ability to recover from damage and keep growing is what makes willows such a popular choice for landscaping.

A willow’s drooping branches and leaves are seen as a symbol of letting go. In many cultures, willows are planted near gravesites as a way to honor the dead.

The willow tree symbolism of grief may be due in part to its ability to thrive in wet conditions. This hardiness has led to the tree being seen as a symbol of resilience in the face of adversity.

“The willow tree plays the water like a harp.”

Willow trees are beautiful specimens that have been used throughout history, mostly for their medicinal purposes.

Native Americans are known for utilizing every part of an animal or plant, respecting the gift that the earth provides for them. They were some of the first people to discover the amazing benefits of the willow tree.

They also made arrows out of willow branches, utilizing the tree’s subtle strength to wield incredible power. Because of willow’s flexibility, they were also used by the Native Americans to make baskets and dreamcatchers.

The willow was a powerful tree that symbolizes healing, strength, and functionality to the Native Americans.

In ancient Egypt, texts called the Ebers papyrus referenced the willow tree. In these texts, the Egyptians recorded the use of willow extract, which they used for its healing properties.

Willow was used by the Egyptians to alleviate pain and heal the skin. To them, the willow symbolized physical healing.

In older days, the Scottish believed harvesting willow bark should be done during certain phases of the moon. If the bark was harvested during the waning moon, they believed the wood would be of lower quality than the other moon phases.

The Scottish also used willow to ward off evil spirits. They would hang them around their home or personal spaces to keep them protected.

On palm Sundays, some British churches were decorated with willow boughs, as they were likely more accessible than palm leaves.

In Japan, there are two stories, “Willow Wife” and “Green Willow,” which both utilize the willow for its metaphoric symbolism. These stories revolve around love, and the willow is used as a symbol of love between two people and how it can grow, die, or undergo a cycle of rebirth.

The willow tree symbolism is sometimes predicted as a symbol of sadness and death, which is likely where these Japanese stories drew inspiration from.

“What a pity every child couldn’t learn to read under a willow tree.”

Willow trees are a common symbol found within dreams to help you overcome current challenges in your life.

When you dream of willow trees, it symbolizes that you need to move on from something or someone in your life. This could be a job, a relationship, or even a place you have been living. It is time for you to let go and start fresh.

When you see a willow tree in your dreams, it means that you need to be strong and have faith. Trust that everything will work out in the end, and know that you are capable of overcoming anything life throws your way.

If you find yourself dreaming of willow trees, it could be a sign that you are feeling unsafe. Willow trees are often associated with sadness and despair, which can indicate feelings of being trapped or stuck in a situation.

If you feel like you’re in a bad place in your life and keep having dreams about willow trees, it might be time to reach out for help.

When it comes to interpreting the meaning of dreams, willow trees generally symbolize flexibility. If you dream of a willow tree, it may mean that you are too rigid in your thinking or in your actions. You need to learn to be more flexible, both mentally and physically, in order to achieve your goals.

For more interesting facts about the willow tree, check out this video!