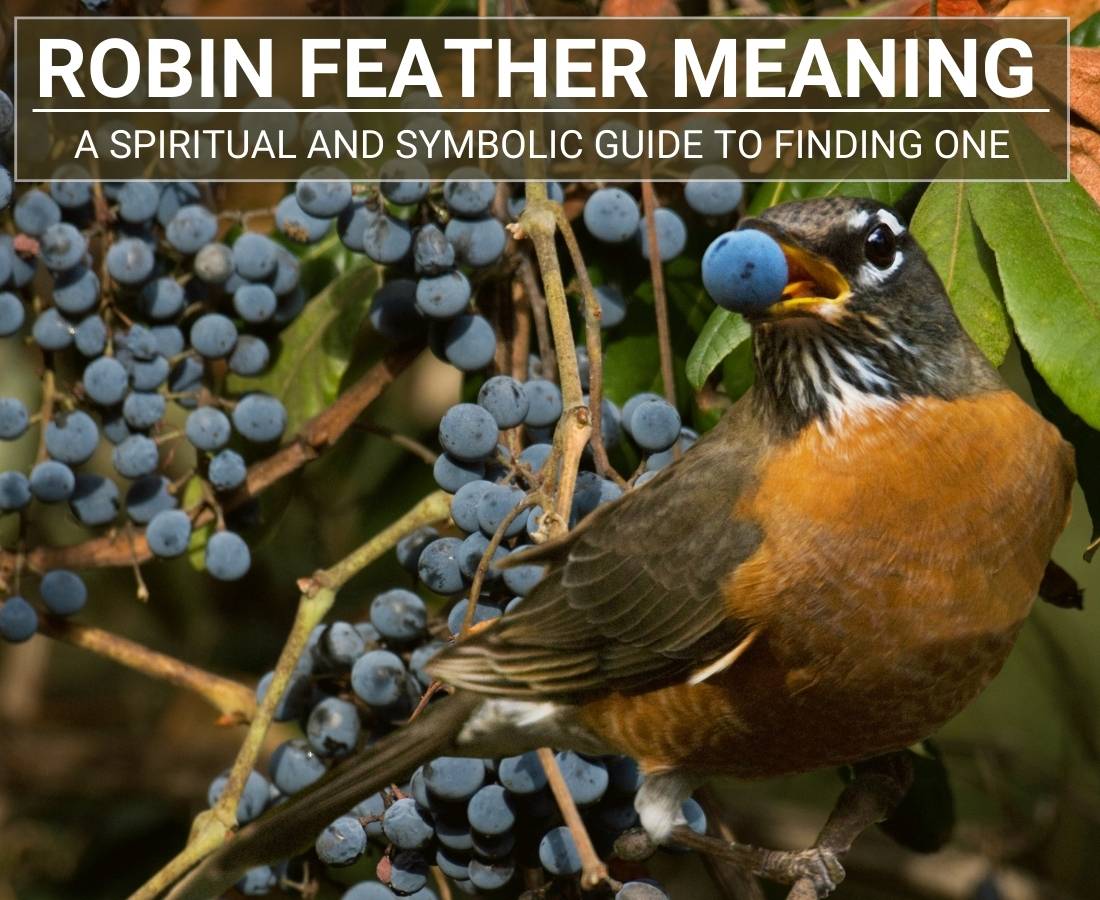 Did you know that a robin can travel over 3,000 miles during migration? These fantastic birds have beautiful brown, gray, and orange feathers that are easy to come by if you live near a forested area.

Have you ever found a robin feather? If so, what did it mean to you? For many people, finding a robin feather is a sign of good luck. But the robin feather meaning goes far beyond just good luck. This beautiful bird has long been associated with hope, joy, new beginnings, and other positive messages.

In this article, we’ll explore what a robin feather meaning is, the cultural significance of this bird, and what finding this feather means if the robin is your spirit animal.

“Young robin do not fall out of the nest. They fly up to it.”

Robins are small songbirds with reddish-orange breast feathers (check post: orange feather meaning) (check post: orange feather meaning). Their belly and throat feathers are white, and they have dark brown heads. The robin’s wings are gray with white bars. Some robins also have a yellow patch on their upper wing. The average robin feather is about two to three inches long.

The robin is a bird that can be found all throughout North America. It has the ability to thrive in any type of environment, from woodlands and gardens with short grass foraging opportunities on its menu; it will even nest under some trees where there’s plenty of space! The European version lives across Europe as well as parts of Asia (like Turkey) and Africa.

In North America, the American robin is one of seven different subspecies. These birds can be found in both very humid areas like Pacific Northwest and desert regions where they live under different conditions with more limited rainfall than what’s available to them at home base – which will determine how light or dark their feathers may appear compared against other populations that have differing amounts moisture levels throughout its climate range.

Birds are often seen as messengers from the spiritual realm. They are creatures that can travel between the physical world and the world of spirit. Because of this, they often carry messages from one realm to the other.

The feathers of birds are also associated with air and wind. This element is often associated with new beginnings, change, and travel. So, when you find a robin feather, it may be a sign that something new is about to come into your life. It could also be a reminder to stay light and open-minded as you move through changes.

While there are many meanings behind the robin feather, the most common messages these feathers represent are resilience, gratitude, and anger.

A robin feather is a sign of resiliency and the ability to thrive, even after challenging circumstances.

Some robins are known for migrating toward warmer climates as the seasons’ change. Interestingly, not all robins migrate; some prefer to stick around their home area.

The feather of a robin holds pure gratitude for life, enough for them to resist migrating even in the colder months.

There’s a common saying that robins “see red,” which refers to someone or something extremely angry. While these birds don’t see red, they have been known to attack red items, such as dead red birds, red beards, and red leaves.

A robin feather may be a symbol of anger or frustration. These feathers indicate that there could be unresolved emotions that need to be dealt with.

Robins are most commonly found throughout Northern America, making them a staple in cultures in and around the continent.

Some Native American tribes associate robins with the element of fire due to their orange-red chests. Their presence was also considered a sign of peace and contentment.

Robins have also been associated with motherhood in certain tribes. They believed that finding their feathers or seeing these birds interacting with their babies was a positive omen if they were expecting a child or trying to become pregnant.

In the Native American legend, How Tol-Le-Loo Stole Fire, the robin is depicted as a protective bird. The story follows a mouse set on stealing the fire to have light for his community.

The mouse traveled until he found fire amongst the Valley People. The robin who lived there caught the mouse trying to steal their fire and protected it by covering the fire with his chest.

Native Americans believed that the robin’s noble choice to protect the fire of his people is what gave these birds their bright-chested feathers.

In Celtic folklore, Pagans celebrate “the birth of the new sun.” They often associated the robin with the new sun and were a symbol in these celebrations.

In their folklore, the robin is believed to have destroyed the old sun, causing its blood to spill onto the bird, painting its chest red. They state that these birds could represent death, and finding a robin feather could signify someone close to you was nearing death.

In Christianity, some believe a robin stayed with Jesus in the last moments of life. The blood from Jesus transferred onto this bird; they think this is where their fiery chests originated.

Some Christians believe these birds helped tend to the fire that kept baby Jesus warm, where their bright chests first developed.

The robin spirit animal flies into your life and can be called upon to help guide you through life’s challenges.

If the robin is your spirit animal, you may find its feathers to inspire your resilience to overcome the obstacles you face and help you let go of any anger or resentment you may harbor. Their feathers may also appear as a positive sign of pregnancy and fertility.

Further reading about the robin symbolism

For more information on these fantastic birds, check out this video!