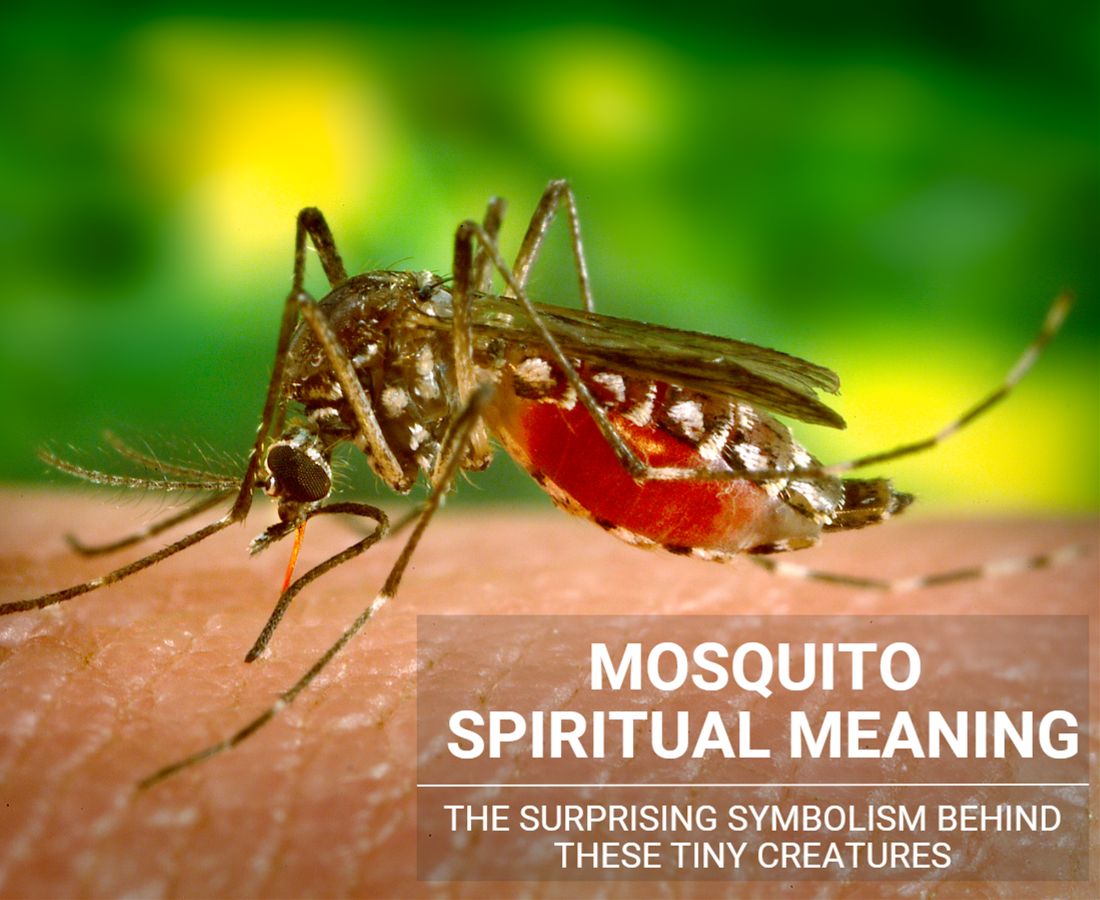 Notorious for leaving itchy red bumps that appear soon after they bite, mosquitoes are at the top of the world’s most annoying insects. Apart from being a pesky bloodsucker, these naturally aggressive critters have been carriers of major health concerns in many countries for years. However, the great spiritual messages they fly in with show that there is more to them than simply leaving a sting that you can’t help but scratch.

From their troublesome yet amazing ability to bite in a flash to their irritating drone-like buzz, let’s rub into the stinging mosquito spiritual meaning.

“To me, there is nothing more soothing than the song of a mosquito that can’t get through the mesh to bite you.”

What does a mosquito symbolize?

Mosquitoes, like the symbolism and meaning of insects in general, come with fascinating symbolism. While they may not become a crowd favorite anytime soon, we decided to look into what these bloodsucking creatures mean.

Considering its relatively minuscule size, a mosquito can still adversely influence our lives. Their presence reminds us how we can make a difference regardless of our stature and prominence. Mosquitoes inspire us to improve and bounce back from our disappointments and failures.

With a lifespan of only 8-10 days, a mosquito motivates us to embrace the challenges of unexpected transformation and change. It tells us how we should constantly strive to take a path leading to physical and spiritual progress. Since their presence is enough to incite agitation, mosquitoes urge us to get rid of the things that cause discomfort and find ways to ensure that we live with contentment and comfort.

Although we instinctively swat at them, mosquitoes persistently circle back and try to sneak in a quick bite, reminding us that persistence can make our goals more attainable. Contrastingly, the sudden appearance of mosquitoes teaches us how to be less irritable, ultimately helping us develop close-knit relationships.

Besides being branded the most bothersome insect on the planet, mosquitoes pack a bite that is not only itchy but also possibly fatal. Although the mere buzz of these bloodsucking creatures is enough to drive us crazy, various traditions can’t help but be amazed by their symbolism.

The Tlingit were an ancient North American tribe that greatly flourished on the Northwest Pacific Coast. They are among the few who show an obscure fondness for these annoying little critters.

Legend has it that a giant once tormented the people of Klukwan by coming down into their camps to steal salmon from their drying racks. The giant began hunting the villagers for food when the fish were all gone. Fearful for their children, they tried to kill the giant with spears, but their weapons bounced off its skin.

To get rid of the giant, they tracked him up the mountain, dug a pit, and lined the bottom with a strong sinew net. They then sent their fastest hunter to try to draw the giant out. Failing to see the trap, the giant crashed through the hole and got entangled in the net.

Wood and fish oil were added to the trap. The giant knew that the villagers would set him afire. Upon seeing the torches, he cursed that he would continue to feed on them even after his death. It took the villagers four days and four nights to burn the giant until he was reduced to ashes.

On the fifth day, the villagers took a spear and stirred on the ashes to ensure that nothing was left of the giant. To their surprise, the ashes turned into mosquitoes that bit and fed on the villagers’ blood, fulfilling the curse made by the wicked and bloodthirsty giant.

The Haudenosaunee share a myth as to why mosquitoes are more prominent in places with a temperate climate. According to the story, two pine tree-sized mosquitoes terrorized the shores of a river in Haudenosaunee country. These monsters would swoop down and attack the villagers as they paddled down the river in their canoes.

Relying heavily on the waterway, the Haudenosaunee tried to change their route to avoid the river. They were unsuccessful since the mosquitoes simply flew to the other passage to seek their prey. Causing great fear and anxiety to the Haudenosaunee, the villagers called on their bravest warriors and launched an attack against these evil beasts.

When the monstrous mosquitoes got the better of them in the river, the Haudenosaunee decided to continue their attack on land. By taking cover behind the thick trees and bushes, the beaks of the mosquitoes could no longer reach and hurt the warriors. They repeatedly struck the beasts using arrows and clubs until their bodies were destroyed. However, tiny mosquitoes rose from the blood of their humongous predecessors and feasted on human blood up to this day.

In African cultures, mosquitos can signify something more than a pesky insect. They are seen as symbols of spiritual protection – when they sense someone is blessed with forces from above, the mosquito tends to stay away.

In other cases, their presence on certain species of frogs symbolizes transformation or rebirth in some communities. Together these meanings create an image that goes beyond its physical form and represents powerful aspects of life itself!

Eastern philosophies such as Hinduism and Buddhism emphasize the importance of understanding impermanence. Insects like mosquitos can serve to remind us that life is constantly changing, so it’s important to stay present in each moment instead of becoming attached to experiences that will not last forever.

Mosquitoes are also indicators of balance within nature; they help form a complete ecosystem by providing food for other animals, thus representing cosmic interconnectivity between all living beings. Consequently, these tiny creatures may be seen as spiritual symbols reminding us about the significance of maintaining harmony in our lives.

From a classical perspective, the pesky mosquito had no greater meaning or spiritual significance. But despite their modest status in Greek mythology, mosquitoes were viewed as symbols of pestilence and disaster – likely linked to Apollo’s power over disease-bearing plagues.

Most of us have a negative perception of mosquitoes. However, these creatures fly in with interesting spiritual meanings.

A mosquito bite reminds us that we should always stay on guard from the threats surrounding us. Its buzzing sound heightens our sensory perception, telling us to pay more attention to the things happening in our environment.

Although female mosquitoes and their babies survive by drawing your blood, it reminds us that every creature on the planet depends on one another and that each of us plays a critical role in ensuring the continuity of life. Born in stagnant water, they rapidly reach maturity and complete a lifecycle within ten days. This spirit guide tells us about the dangers of being idle and inspires us to take the path of growth and development.

The role of mosquitoes in nature

Mosquitoes are essential pieces in the intricate puzzle of many ecosystems, helping to pollinate plants and providing a food source for other creatures. Some species of frogs, also play an important role as larvae develop best in water contaminated with mosquito eggs.

While mosquitoes can be seen as spiritual symbols embodying balance among living beings, they may bring harm when carrying serious diseases like malaria or Zika virus which lead to negative impacts on our health and well-being if left unchecked. It is thus paramount that we maintain healthy ecosystems so these unwelcome guests don’t cause us any trouble!